Warning: This post features explicit details of child abuse that could be triggering for some readers.

Sanaa Cunningham was six-years-old when she started to forget how to do simple things like open a door, or use the toilet.

Her older sister said she felt like Sanaa was "disappearing before their eyes."

Aged seven, Sanaa died. She had a bone-deep cut on her foot and more than 100 cuts and bruises on her body.

Her step-mother, South Australian-born Lisa Cunningham, and father ex-police detective Germayne Cunningham have been charged with the little girl's murder in America, and face the death penalty if found guilty of her abuse, neglect and subsequent death.

When Lisa discovered infidelity in her 14-year marriage she filed for divorce.

The Murry Bridge local wanted to move back home to Australia, but her US airman ex-husband filed an injunction preventing her from leaving the country with their two children, so she moved within the United States instead, settling in Pheonix, Arizona.

"Obviously I would not leave them [my children], so I was forced to stay and build a new life," she told The Quicky, via a prison messaging app this week.

In May 2011, Lisa met Germayne Cunningham and in 2013 they moved in together and blended their families.

He had sole custody over two daughters from his previous relationship, the youngest of which was Sanaa, who was 18-months-old when Lisa met her. The couple married in 2015, and had two children of their own, Eva Marie and Gabriel Sean.

The family also had three rescued terriers, and Lisa describes their family unit as; "the eight of us. Our big crazy beautiful family. We had a huge house that was packed full."

Sanaa started acting differently towards the end of 2015, and Lisa says her behaviour left the family "blind-sided."

"I was worried about chronic hunger, constant complaints of stomach-aches, and because she was eating a lot of food but not showing any weight gain at all. How can this be?" Lisa told The Quicky via text.

Before her death in 2017, Sanaa had visited eight different doctors within 10 months.

The couple told the medical professionals Sanaa had been tearing at her skin, and that she was "hearing voices." She'd also begun to defecate and urinate on the floor, and had hurt one of their pets.

"[Sanaa was] completely normal until she turned six. That was when the ­decline started, and we all had to watch it. She would become catatonic, or else she’d throw things, try to hurt us. She’d scream, and my parents would sit up and cry all night with her," Cierra Anderson, Lisa's eldest daughter told The Australian in 2018. "None of these experts suspected we were tricking them to conceal child abuse (that's the state's theory)," Lisa told The Quicky.

Examinations showed Sanaa had many health conditions including schizophrenia, mood disorders and a psychological disorder called pica - characterised by an appetite for substances that offer no nutritional benefits, like paper, hair or ice.

During the process of investigating the little girl's health, the Cunninghams were the subject of three child safety investigations.

Court documents allege the couple shut Sanaa in their backyard, laundry and garage, forced her to sleep outside, restrained her with cable ties and failed to seek medical care.

Cierra told The Australian that Sanaa needed to sleep alone in a downstairs laundry "because she’d get up and we’d find her looking over one of the babies’ beds."

The first Department of Child Services (DCS) report, Lisa describes, was called in by a neighbour who alerted authorities because "I wouldn't write her a letter saying her boyfriend was a roommate so she could qualify for food stamps."

The neighbour alleged they had forced Sanaa to pick up dog poo as a punishment, but DCS closed the report as 'unfounded.'

The second report came from Germayne's own mother who had googled the little girl's symptoms and likened them to abuse. Again the report went unfounded.

Germayne had his mother served with a protection order for filing a false report.

The third report came from Germayne's ex-wife, who had been called by her ex mother-in-law. The case was investigated and kept open for two months before DCS told the couple "if we failed to follow the treatment plan and refused to medicate Sanaa as recommended they would remove all of our children [over the] medical neglect of Sanaa," explained Lisa.

They agreed, and so the third case was again put down as 'unfounded.'

As Sean Holstege, a freelance journalist who has been following this case for The Phoenix New Times told The Quicky, the prosecution is suggesting that the family received some preferential treatment during these three DCS investigations due to Germayne's career as a police officer.

"When Germayne went to court [for the first time], the judge let him go without bond," said Holstege, noting that for a crime of this magnitude it was considered odd.

Three weeks after starting the ordered treatment plan which included the medication Risperdal, an antipsychotic drug not usually prescribed for children, Sanaa was taken to the Emergency Department in the middle of the night.

"It looked like laboured breathing and she'd had a runny nose," said Lisa. 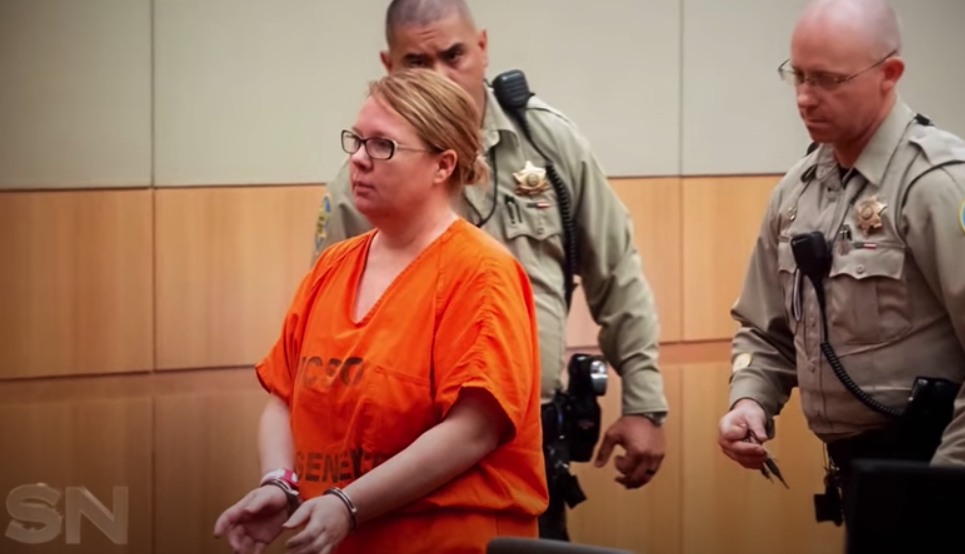 Lisa has been talking to Mamamia's The Quicky via a prison messaging service. Her criminal trial was due to start last month but has been suspended due to COVID-19. Image: Sunday Night.

In February 2017, Sanaa died of cardiac arrest after six hours of trauma treatment at Phoenix Children's hospital, from unknown causes.

She was diagnosed with having critically low blood volume, a critically low white blood cell count and a coagulation disorder called Idiopathic Thrombocytopenia Pupura - a condition commonly known as medical bruising or bruising caused by medication.

Her body was covered in at least 60 scars and more than 100 cuts and bruises. She also had multiple ulcers and abscesses.

Sanaa's autopsy results ruled that she'd died of sepsis from an ulcer and acute bronchitis.

Lisa and Germayne were arrested by police in December 2017 after a series of expletive filled text messages were found by detectives.

The texts show the couple becoming increasingly frustrated and overwhelmed by their daughter's behaviour.

"She's not sleeping. She's standing, and I am not dealing with her again tonight. It's midnight...I'm not having her groaning and screaming and keeping everyone up playing her bulls***," read one message from Lisa to Germayne. 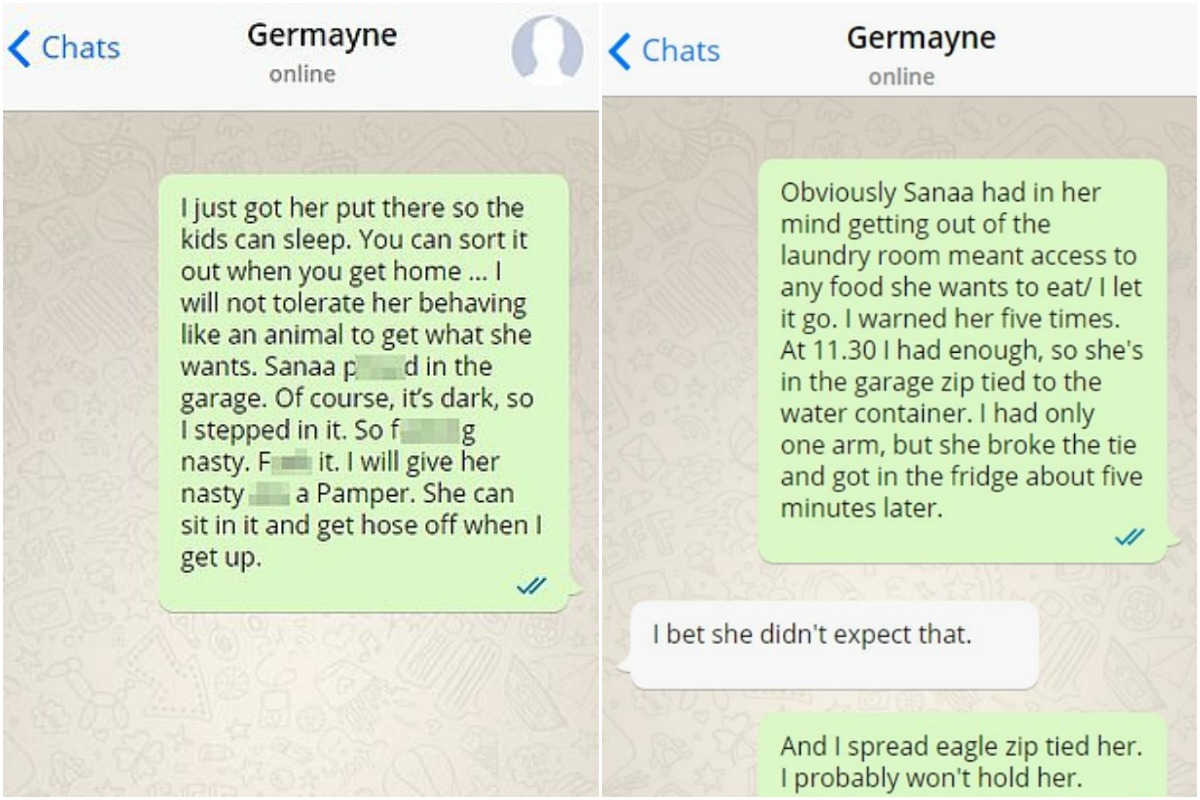 An example of some of the text messages put forward by the prosecution. Image: 7News.

﻿﻿"I just put her there so the kids can sleep. You can sort it out when you get home...I will not tolerate her behaving like an animal to get what she wants. Sanaa pissed in the garage. Of course it's dark, so I stepped in it. So f***ing nasty. F*** it. I will give her nasty a** a Pamper. She can sit in it and get hosed off when I get up," read another text.

"I warned her five times. At 11:30pm I had enough, so she's in the garage zip tied to the water container. I had only one arm, but she broke the tie and got in the fridge about five minutes later," read a third. ﻿﻿

A message from Germayne read: "﻿I don't want her to sleep with her hands behind her back, for some people can die like that if they have certain health issues or are on drugs."

The text messages are described as "critical to criminal and medical findings" and will play an important part in the couple's upcoming trial, but the Cunninghams maintain they have been fabricated.

The Cunningham's lawyer argues the autopsy examination was unable to determine whether Sanaa died as a result of homicide and has accused police of botching a report that details the text messages.

"The report that Goodyear police department circulated as an authenticated extraction of my cell phone contained fated texts ranging from 2001, 2002, 2004, 2005.

"These obviously falsified dates prove the report is a falsified report and could not possibly have ever been an 'authenticated' report as is required by law," Lisa told Mamamia's The Quicky.

"The phone was nine weeks old in 2017, and my attorney revealed in court the dates go back 17 years, on texts about abusing and zip tie restraint of Sanaa, who wasn't born until 2009," she explained.

"It was astonishing to hear the trial judge state this seemed to be odd, and that he didn't think the texts had much weight in the case. [But on] the charge sheet, all 11 crimes have been drawn from the text messages," Lisa wrote.

Lisa and her husband have pleaded not guilty to all 11 charges including first degree murder, and were due to start their criminal trial in July, 2020.

But their defence investigator died from COVID-19 a month ago, and Germayne is currently fighting the virus in Durango Jail in Phoenix.

Lisa has described coronavirus as a "crushing blow," as they continue their fight for freedom. She remains inside the maximum-security wing at Estrella Women’s Jail in Arizona.

As Holstege explained to The Quicky, the defence team is obligated by law to do what's called a mitigation litigation. So if the Cunninghams are convicted of murdering Sanaa, there's another phase of the trial (it's like a whole new trial), based on the character of the defendants to determine whether they deserve leniency. So in this case death penalty over life.

"So in order to do that defence, the defence team has to travel to Australia to interview all of Lisa's relatives and childhood friends. So because they can't travel to Australia, it renders it [the trial] completely impossible. Basically, the entire process has been put on hold indefinitely because of the affect of COVID-19 on the court system."

If she is found guilty, Lisa will become the first Australian woman to be executed in America.

The method of capital punishment in Arizona is lethal injection or gas, and it's known as being one of the most aggressive states when it comes to seeking and securing the death penalty.

As an Australian citizen, Cunningham would appear to be eligible for up to $500,000 in legal-fee funding from the Overseas Criminal Matters Scheme, which provides funds to Australians facing the death penalty.

The couple's other children have been placed into foster homes by Arizona welfare agents.

Reply
Upvote
This poor child was not eating correctly for her symptoms and unfortunately her parents were only guilty of not knowing and not being educated on the exact diet necessary to heal these symptoms. Instead of being fed nutrition that would have alleviated her problems her situation continued to escalate. These parents are not guilty of murder, period.
S
shazz 2 years ago