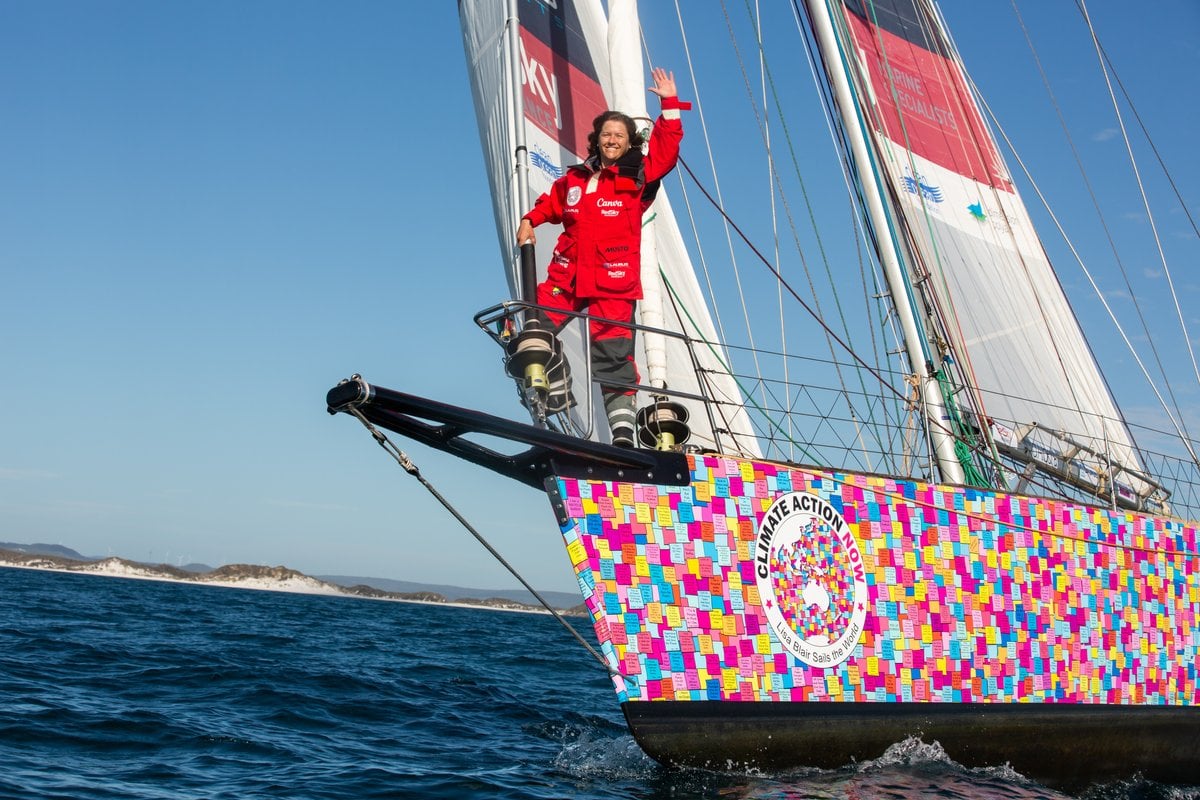 As her yacht sailed in to Albany, WA to jubilant cheers and the sounds of ship horns, she became the fastest person to circumnavigate Antarctica - solo, non-stop and unassisted.

Lisa did it in 92 days - 10 days faster than the previous record held by Russian man, Fedor Konyukov in 2008.

It was a record she was determined to beat.

"I've done it, and I've shaved ten days off the record!," she told the ABC who were portside at her arrival.

"This is a pretty big deal for me."

In 2017, Lisa became the first woman in the world to sail solo and unassisted around Antarctica. She had her sights set on becoming the fastest person.

While in 2018, Lisa achieved the fastest solo circumnavigation of Australia - and was the first woman in history to do so - three months ago, she embarked on Antarctica 2.0.

On day 67 at sea, Lisa spoke to Mamamia from her yacht.

It had been a couple of days since she had last slept - and even then, her sleeping schedule was made up of 20 or 40 minute naps.

But that’s just the reality of when you’re navigating a yacht during a storm at sea. Alone.

The phone line was patchy, her voice distantly coming in and out from her boat, somewhere in the Southern Ocean due south from Capetown, South Africa.

Thousands of kilometres from the nearest shore, Lisa shared with Mamamia, “The ocean is so grey, you often can’t see where it stops and where the horizon begins.”

And it’s cold - really cold. On average, the mercury hits around 3-5 degrees celsius, but that’s just the air temperature. Add to that, the wind chill factor too.

“Sometimes the wind is so strong down here that you have to cup your mouth and turn your head away from the wind just to get a breath of air.”

“And if you’re on deck and get wet hands, it is excruciatingly painful.”

“There’s often fog and light rain. You can get waves the size of a four or five-story building even on a fairly calm day, generated by a storm that’s 2000-3000 miles away.”

And what happens when those storms actually arrive?

“I just came through a patch where it was sleet, snow, blizzards, hail, 50 knots of wind and huge waves.”

“The waves pick up the boat and bop you around like you weigh nothing. You feel the boat airborne and roll over.

“It’s then calm for an hour or two… before the next storm hits.”

Lisa speaks with ease and matter-of-factly, about a scenario that sounds *ahem* truly, f***ing terrifying.

“It can be quite terrifying at times,” she concedes with a giggle, “but you can’t do anything about it. You have to trust in the strength of the boat.” 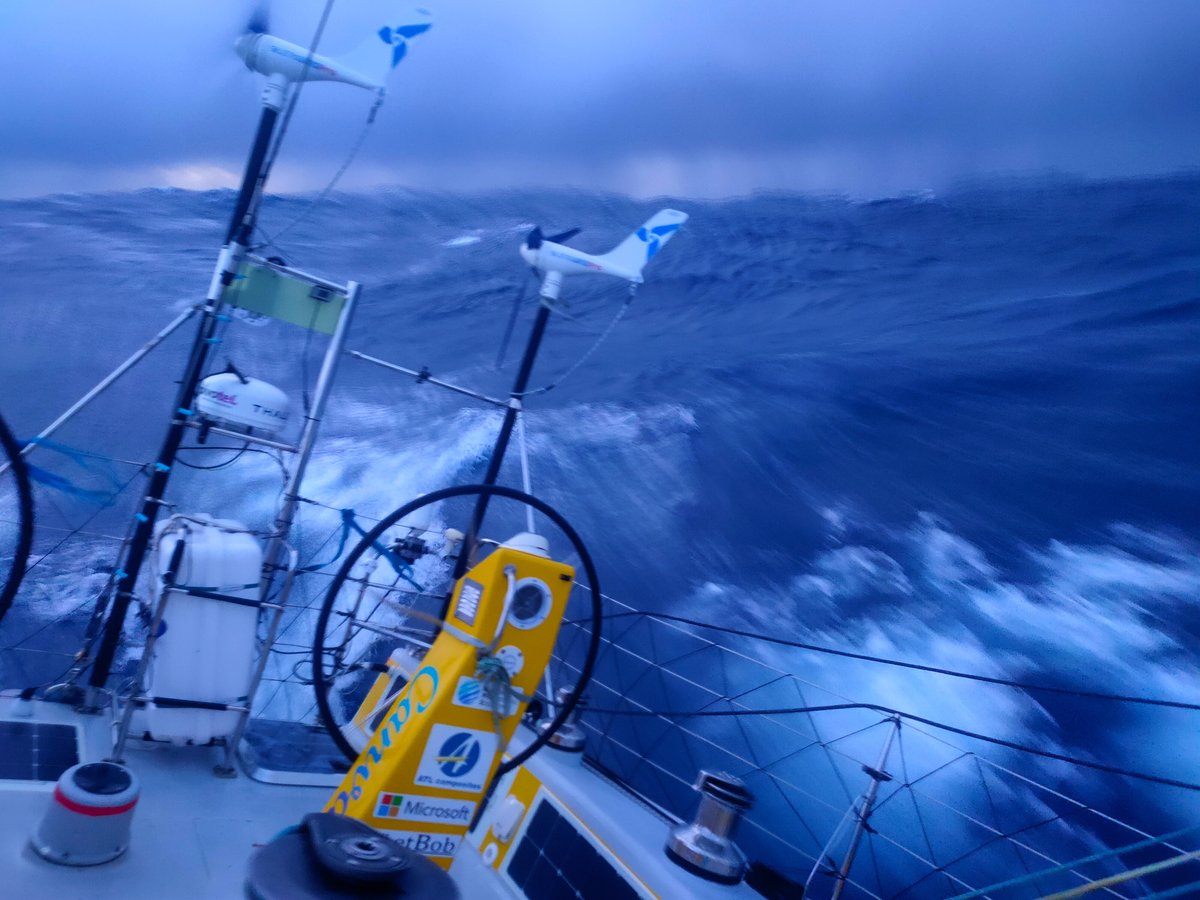 Image: Supplied. In the eye of a storm, Lisa puts herself in the smallest location on the boat; the navigation station, or in her bunk. She also relies on her body armour pads which protect her knees and ribs.

But yesterday she was really “thrown around”, and is nursing a badly injured finger at the moment.

Also, preparation is “make or break” - as is confidence.

A journey with purpose

Lisa’s motivations for tackling the Southern Ocean again are beyond her personal aspirations. She is driven to bring awareness to the degradation of the environment and pollution of the oceans; something she was “absolutely shocked” to see with her own eyes when she participated in her first around the world charity yacht race in 2011.

“There were areas, especially around China and the Asian continent, where we literally had to push debris out of the path of the boat, because the water was so clogged.”

But the most confronting sight came in the middle of the Southern Ocean.

“There, in one of the most pristine areas of our world, thousands of miles from land, was a Styrofoam box floating past with a bird sitting on it.”

Lisa has also noticed the obvious impacts of man-made climate change: storms that are more aggressive, and less predictable; the absence of wildlife in areas that once flourished with life, and an increase of floating ice from melting glaciers.

“I was just so frustrated, and I wanted to do something about it.”

But everyone who Lisa spoke to about the issue, had a common response: Yes, it’s a problem; an enormous, vast mountain of a problem … What can we actually do?

“And I realised that actually if you have a million people making a small change, then you’re making an impact,” she says.

And so, in 2017, Lisa launched the Climate Action Now campaign. Wherever she goes - ports, events, etc. - Lisa implores people to make a small pledge towards climate action on a post-it note. It could be as simple as taking shorter showers, or making more of an effort to recycle. The idea is to create awareness and spark conscious and enduring conversations around the protecting the planet.

Lisa named her 15 meter yacht, Climate Action Now, and the post-it note pledges have been transformed into artwork that wraps around the entire hull of the boat, “so instead of just being one girl trying to circumnavigate Antarctica, I’m carrying the messages and pledges of thousands of others, committed to playing their part too”. 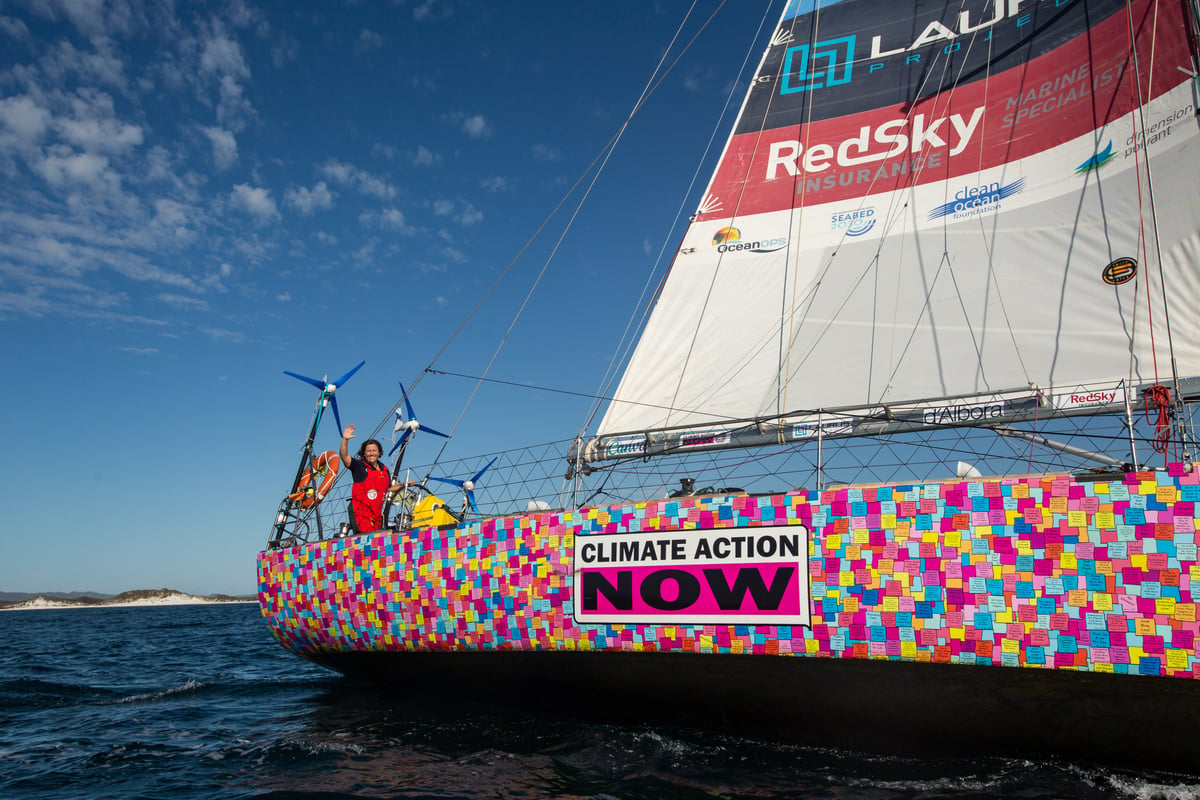 Lisa aboard Climate Action Now. Image: Corrina Ridgeway/Supplied. Sailing in a region so remote where little ocean health or scientific data exists, Lisa has also used the opportunity to contribute to science, teaming up with different scientific organisations and universities to gather research on their behalf. She is the first person to have every collected samples so deeply south into the Southern Ocean, and therefore able to measure the true impact of human pollution.

There is a mini-laboratory aboard the yacht, and each day Lisa takes ocean health readings, microplastic samples, and gathers meteorological data to help with global weather modelling. She has also deployed eight weather drifter buoys along her journey, which will drift in the ocean for years, feeding data back to the Bureau of Meteorology. It is anticipated that by early next year, the samples will have been processed, with data released.

The glamourous reality: food, showers and... that time of the month.

But the everyday reality of solo sailing persists. And that begins with… porridge.

The logistics of a three-month voyage - sans stops - means that food is not fresh. Everything is freeze-dried and rationed - “with a limit to the varieties of vegan freeze-dried available”. Tinned corn, beans and olives are ultimate gourmet flavour additions to any dish. 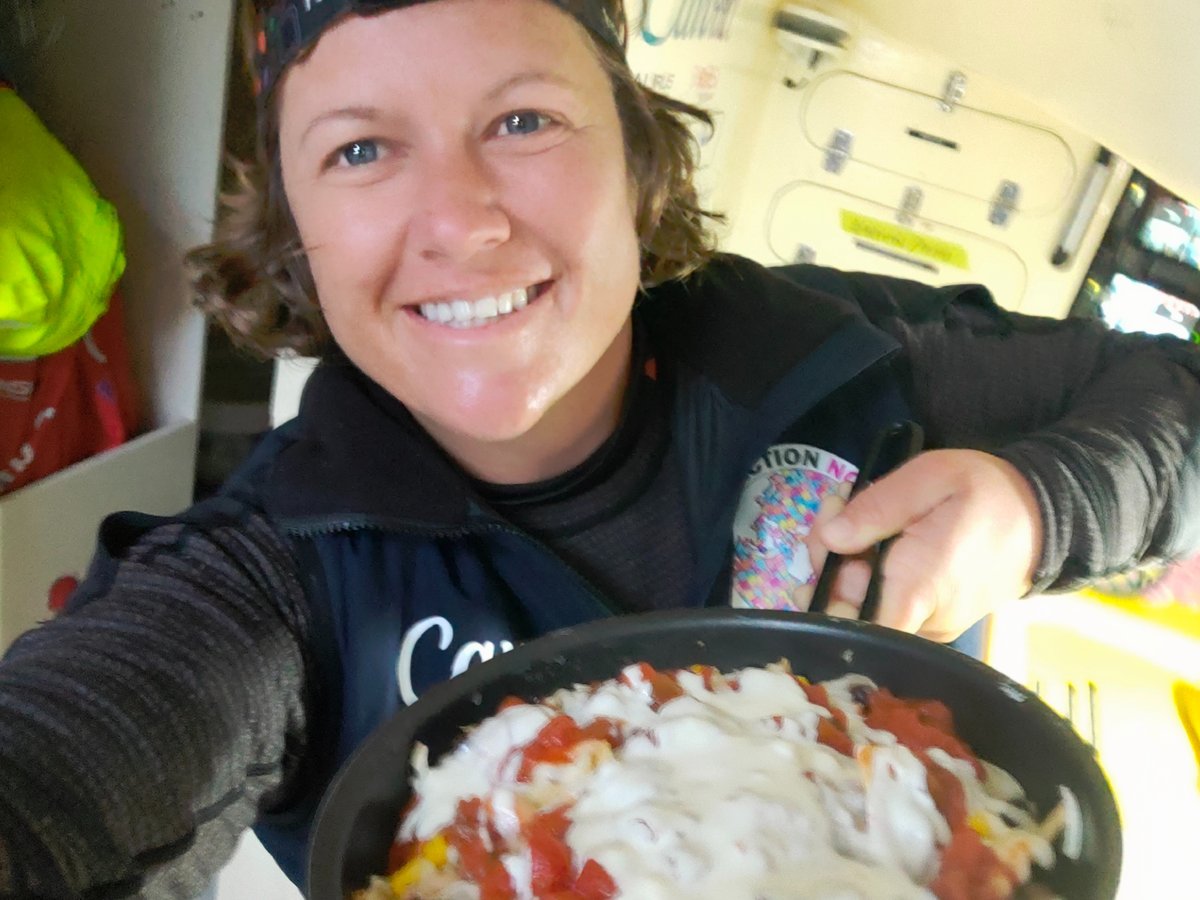 And having a period at sea?

Again, preparation is paramount. For Lisa, that meant having an IUD inserted, “so I pretty much don’t get a period now”.

“That’s the one thing I’m jealous about with the guys [male sailors],” she says. Aside from not having to deal with a period, “if they need to go to the toilet, they can just take a whiz off the back of the boat! For women, we have to find the right moment to race inside, and then get out of all of our underlayers”.

“...Meanwhile, you’re about to wee yourself!”

Th ease of getting to the toilet in a timely fashion isn’t the only challenge Lisa has faced as a woman sailor.

In terms of participation rates, the sport is still strongly dominated by men. When Lisa competed in the 2017 Sydney to Hobart Yacht race, she says she was just one of five female boat-owners/skippers… in a 102-strong fleet.

While she says the general attitude and culture continues to improve as the next generation comes through, “subtle sexism still happens”.

“If they don’t know who I am, and they see me coming into a marina, every single time, there will be some random lovely person who is trying to be helpful and tell me how to park the boat… But no one ever tries to tell a man how to park a boat.”

And there are assumptions about women lacking physical capabilities too. 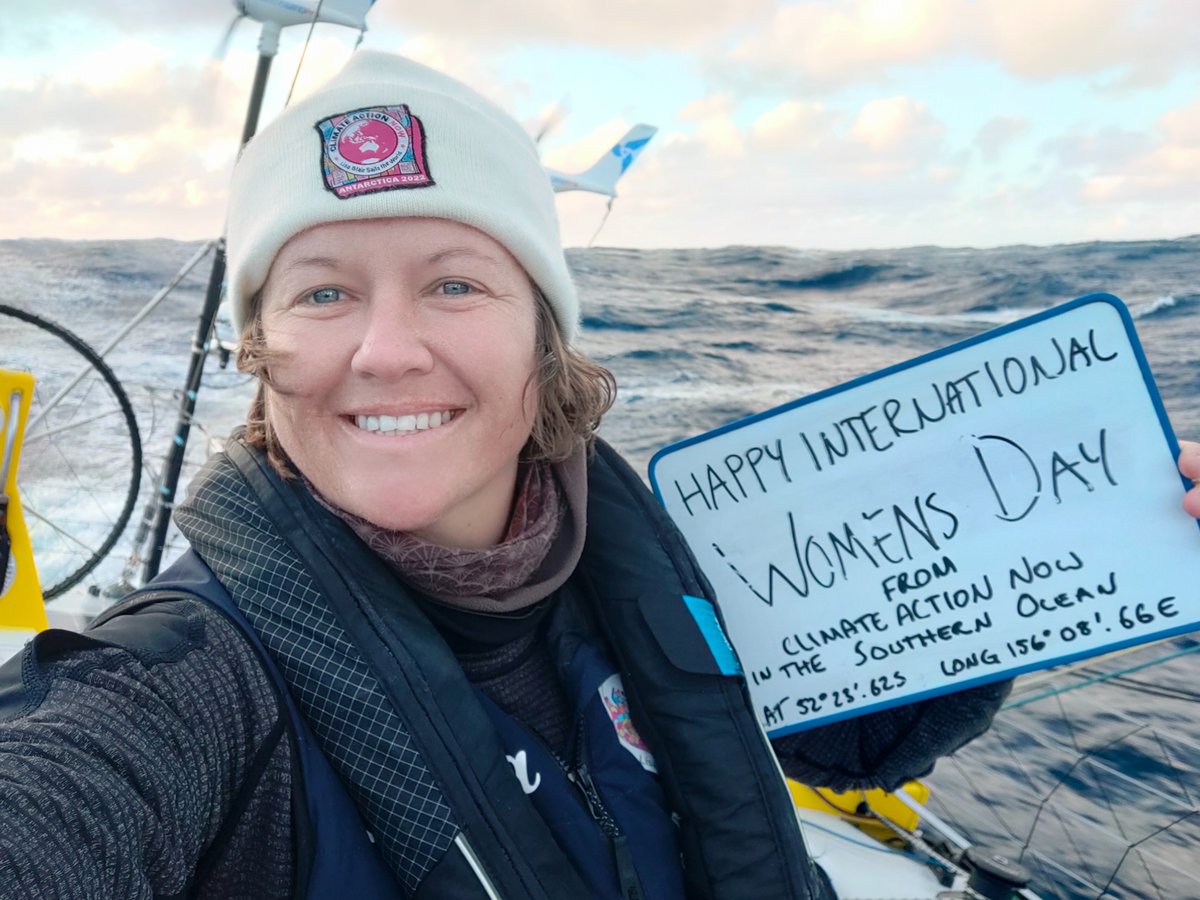 Image: Supplied. “While women might not always not have as much strength, there are different techniques at doing the same job. That’s why it was so important for me to come back and break the time record.

“I already hold the world record for women, but why should it be a women’s record? Why can’t it be the best person?

“I hope that by me doing this, there will be less hurdles, and girls anywhere can see that they can do anything they want if they put their minds to it.”

Lisa recalls that first round the world yacht race in 2011, and the epiphany moment it evoked:

"Just three years prior to that race, I never thought that I would be able to accomplish such a feat.

“And that made me realise that my opinions of what I thought I'm capable of, and what I'm actually capable of were entirely different.”

The toll of three months - alone - at sea.

It does all come at a cost, though. And after almost 90 days at sea on her own, dealing with constant challenges, rationed food, and barely any sleep, how does Lisa keep sane?

“I’ve had a few two-year-old toddler-like hissy fits,” she laughs. “The more sleep deprived I am, the less I am able to measure my emotions and deal with scenarios.

“If I’m getting to that point where everything is frustrating and difficult and I’m near tears and I just can’t take it, I know I just need to optimise my sleep, and if I do that, instantly things that seemed like major, world-ending issues are fixable again.”

And when she can find those fleeting moments of ‘down time’, she works her way through episodes of TV show, The Good Place.

'Mother nature in its rawest form'

After finishing her university studies, at 22, Lisa found a job in the Whitsundays as a cook and cleaner on a charted boat. From there, her love affair with the sea began and progressed, and now: “the ocean is my home as much as the land is”.

“You have this sensitivity because your entire world is narrowed down to the environment around you.”

Throughout this journey, that environment has included as "incredible array" of bird life. 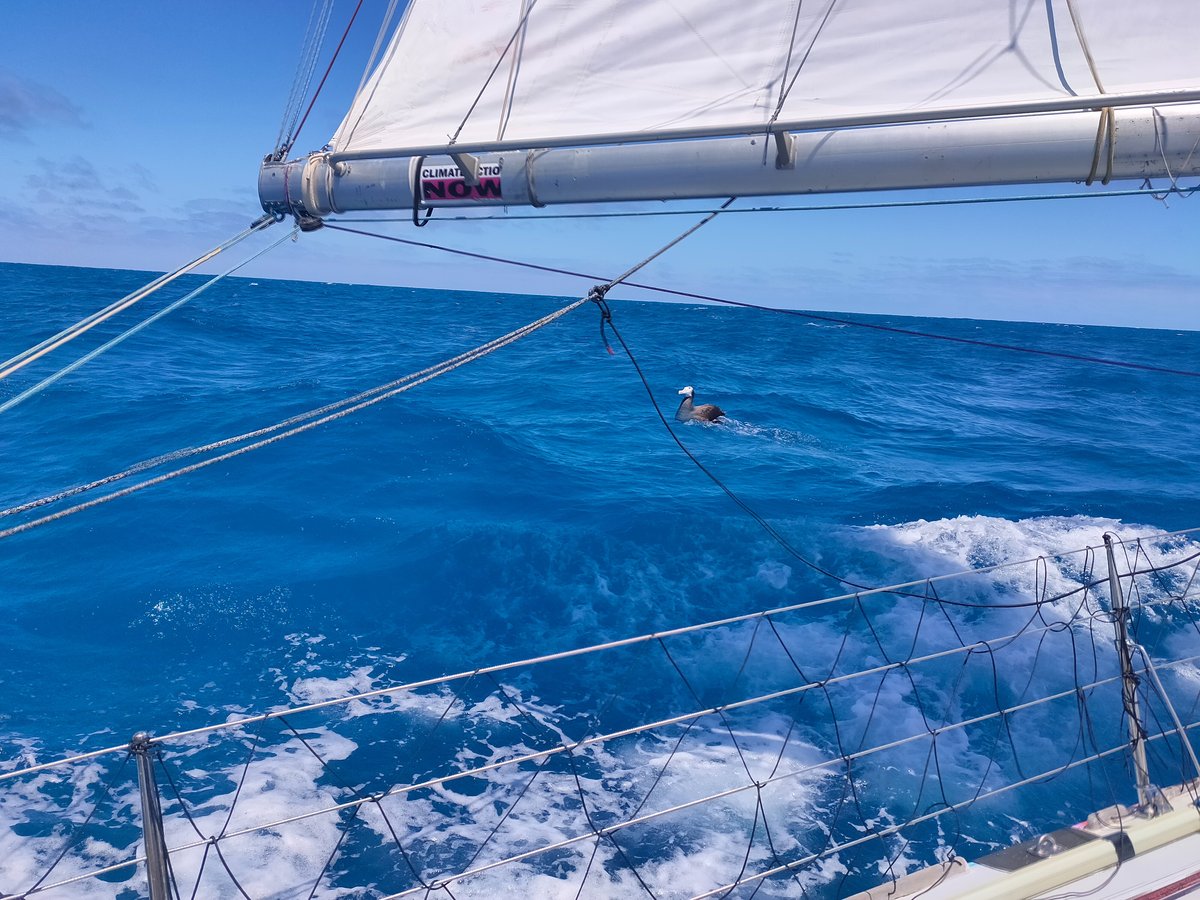 On her last Antarctic mission, she was followed by a territorial pod of Killer Whales for two weeks; this time, she has had some friendly dolphins accompany at different points.

“For me, one of the best things about being out here on this journey is to actually be in the centre of one of it; in this tiny boat throughout those storms that are the size of a hurricane, going through huge waves, and having this incredible experience where you get to witness mother nature in its most impressive, rawest form - and survive it.”