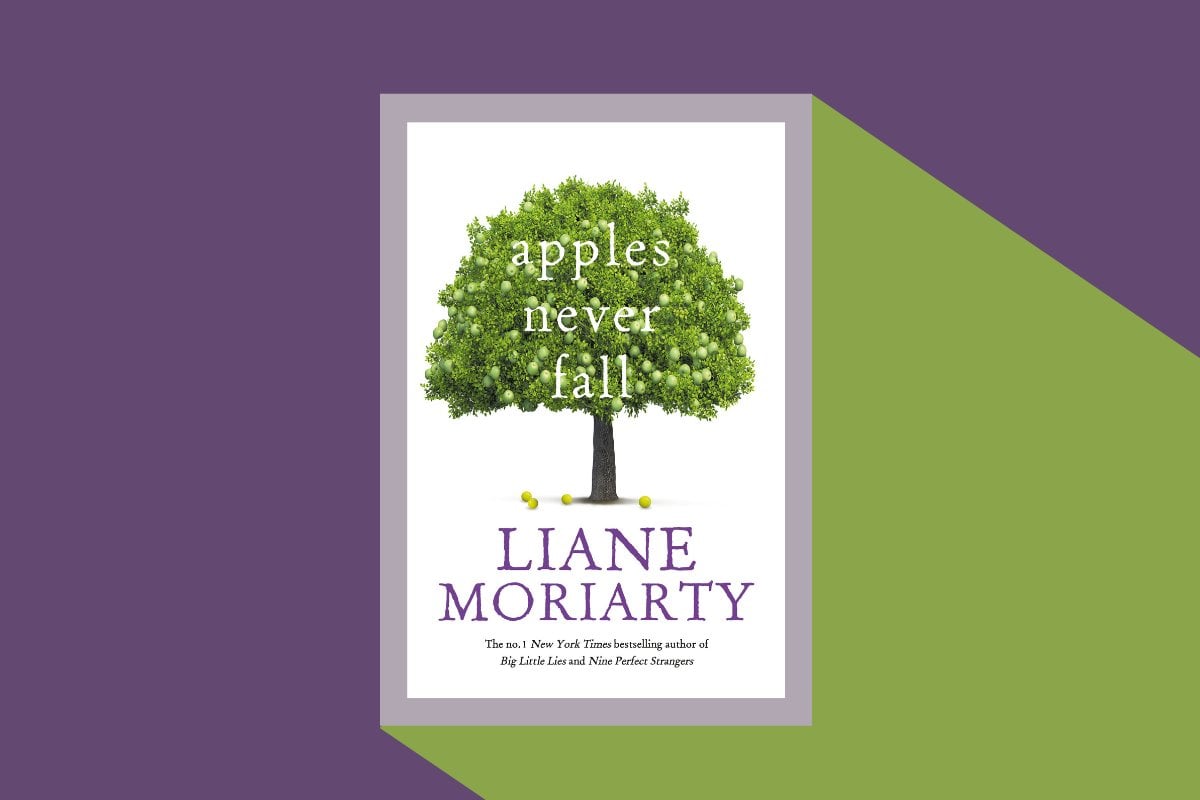 Liane Moriarty had decided to take a year off writing when her sister Jaclyn sent her a writing prompt.

"She texted me a few lines, which was just a description of a bike lying on the grass underneath a tree with some apples lying next to it," Moriarty explained to Mamamia over the phone.

That image became the opening scene of her latest novel Apples Never Fall.

Apples Never Fall is Moriarty's ninth novel, and like all her books, the idea for the story came together over time through what she describes as "a few little sparks".

One spark happened when her husband bought her some fancy new headphones and she started listening to true crime podcasts.

"I think there were a few true crime cases, which got me thinking, and I came up with this premise of how would you feel if your mother went missing, and your father was the chief suspect?" she explained.

Another spark was a news article she read one day.

"I'd also read an article about an elderly couple who let a young woman into their home late at night," she said.

And that's how the plot of Apples Never Fall came together.

The novel follows the story of Sydney couple Joy and Stan Delaney and their four adult children.

From the outside, the Delaneys seem like the perfect family. Former tennis coaches Joy and Stan are still winning tournaments after decades in the industry. They've just sold their business, their grown children are busy with their own lives, and they're easing themselves into retirement.

But when Joy disappears, her kids are forced to reexamine their parents' marriage with fresh eyes. They must ask themselves – is her disappearance related to their mysterious houseguest from last year? Or were things never as rosy as they seemed in the Delaney household?

Joy and Stan are such relatable characters, that when reading the book you may find yourself thinking about your own parents, or the parents of someone you know. But they're not based on anyone in particular.

Instead, Moriarty takes little bits of inspiration from different people she knows and meets.

"I always say that I confess to taking an attribute or two from people I know but never an entire personality," she explained.

"So I always remember with the character of Madeline in Big Little Lies, writing down perpetually outraged like so and so. And sort of shimmery ego like so and so. And then I had those two attributes, but then as I started to write Madeline became entirely her own person anyway, who was nothing like either of those two people.

"So sometimes I start with one particular attribute, which might belong to a real person, but then through the process of writing something magical happens, and they become their own people."

LISTEN: How Jane Harper wrote The Dry. Post continues below.

As for her writing process, Moriarty starts off with that basic premise and just starts writing.

"I don't plot it out at all," she explained. "So with this book, I knew that Joy had disappeared, I didn't know what had happened to her. And I knew I'd have this girl knocking on the door late one night, but I didn't know what the consequences of her turning up would be. So I just work it out as I go."

"But then I have to obviously go back and fix things, and put in the red herrings and signpost certain things.

"So it's a fun way to write because you think 'I wonder what's going to happen?'"

To make sure she's making progress and meeting her deadlines, she gives herself a daily word count of 500 words.

"Because I'm not a planner, the temptation every time that I sit down at my desk is to go back and rewrite what I've already done the day before. So that's why I have to have that word count to push me forward. And to get a sense of momentum."

Apples Never Fall is Liane Moriarty's ninth novel. It's available to buy now through Booktopia and all good bookstores.