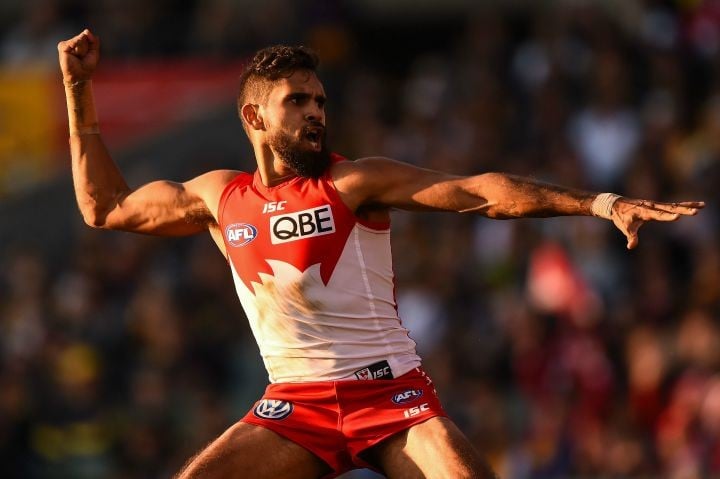 Here we are again…

Earlier this year, the nation worked itself into a frenzy over a certain “war dance” performed by former Australian of the Year Adam Goodes at an AFL match.

In May, Sydney Swans player Goodes mimed throwing a spear as a sort of celebratory expression, as well as a nod to his Indigenous heritage.

But some commentators were quick to call out the move as “aggressive”. Violent. Unnecessary.

Ever since, Goodes has been continuously booed during matches by supporters of the opposing team. That’s 15 or 16 weeks of bad-natured boos.

But this past weekend, one of Goodes’ teammates had enough.

The Herald Sun reports fellow Sydney Swans player, Lewis Jetta, reprised the war dance during the Swans’ match against the West Coast Eagles — re-opening this strange can of worms.

Jetta explained the move was to show support for Goodes, in the face of ongoing abuse hurled at him by spectators.

But, again, commentators were seemingly threatened by the display.

For Goodes, the dance was an expression of his heritage. For Lewis, it was a show of solidarity.

As far as we’re concerned — these are the only explanations required.

AFL chief Gillon McLachlan has called for an immediate end to the booing, saying “sheep-like” crowds don’t even know why they’re booing Goodes.

“This is something that has not been going on for a few weeks, this is months now. And I just don’t know that it reflects well on our game and people have had enough of it,” McLachlan told 3AW.

“Whatever the point is, I think it’s been made.”

Perhaps the question that needs to asked is not about the meaning of the “war cry”, but what is the deal with those who object to it?

This point was raised by Waleed Aly after the Adam Goodes controversy in May.

“It’s about the fact that Australia is generally a very tolerant society until its minorities demonstrate that they don’t know their place. And at that moment, the minute someone in a minority position acts as though they’re not a mere supplicant, then we lose our minds. And we say, ‘No, no, you’ve got to get back in your box here’,” Aly said on ABC TV.

“What happens is the minute an Indigenous man stands up and is something other than compliant, the backlash is huge and it is them who are creating division and destroying our culture. And that is ultimately what we boo. We boo our discomfort.”

This is just the reminder we need today.

What are your thoughts on this “spear-throwing” move?

Adam Goodes speaks out about his terrifying childhood.

Watch Waleed Aly deliver his most important segment yet.

Waleed Aly slams the government for not spending more on domestic violence prevention.

As a country, we don't always recognize racism when we use it. It's such a casual part of us, and it's wrong.

As for this 'War Dance,' the New Zealand rugby team performs a full traditional war dance before every game. It is a celebration of their heritage!

Only people who do not follow AFL think this is about race and the 'spear dance'.

It's irrelevant. Every shoulder ducking and diving player gets exactly the same treatment and any AFL follower could give you a long list of blonde blue eyed players who received the same spray from the public for doing the same thing.

I follow AFL, my husband us a former player and I am 100% sure it IS about race. The reason other Indigenous players aren't booed, is because they don't call out racism. I can guarantee if they were all as outspoken as Goodes, they'd all be ostracised like he is. It's not a coincidence that the booing really started after he called out that girl on her racist remark.

Depends who it is, some I'd say tall poppy syndrome, some coz they're dirty, some coz they're a show off, one in particular because he was charged with rape, some are just booed by their former team supporters. But none are booed to the extent Goodes is at the moment. Its relentless, and honestly impossible to play when thats happening. I believe when he used to get booed it was probably coz people think he stages for free kicks or he's a suck or whatever, but ever since he started becoming more outspoken on racism and Aboriginal issues the booing has gotten worse. Especially since Indigenous round this year. I don't believe thats a coincidence, thats why I'm sure its to do with race. Not because he's Aboriginal (because we all love Cyril et al.), but because of his stance on these issues.

I follow AFL and I watch the close-ups on various crowd members who boo Goodes.

I'm fairly certain that most are people booing are doing it from a racist perspective.