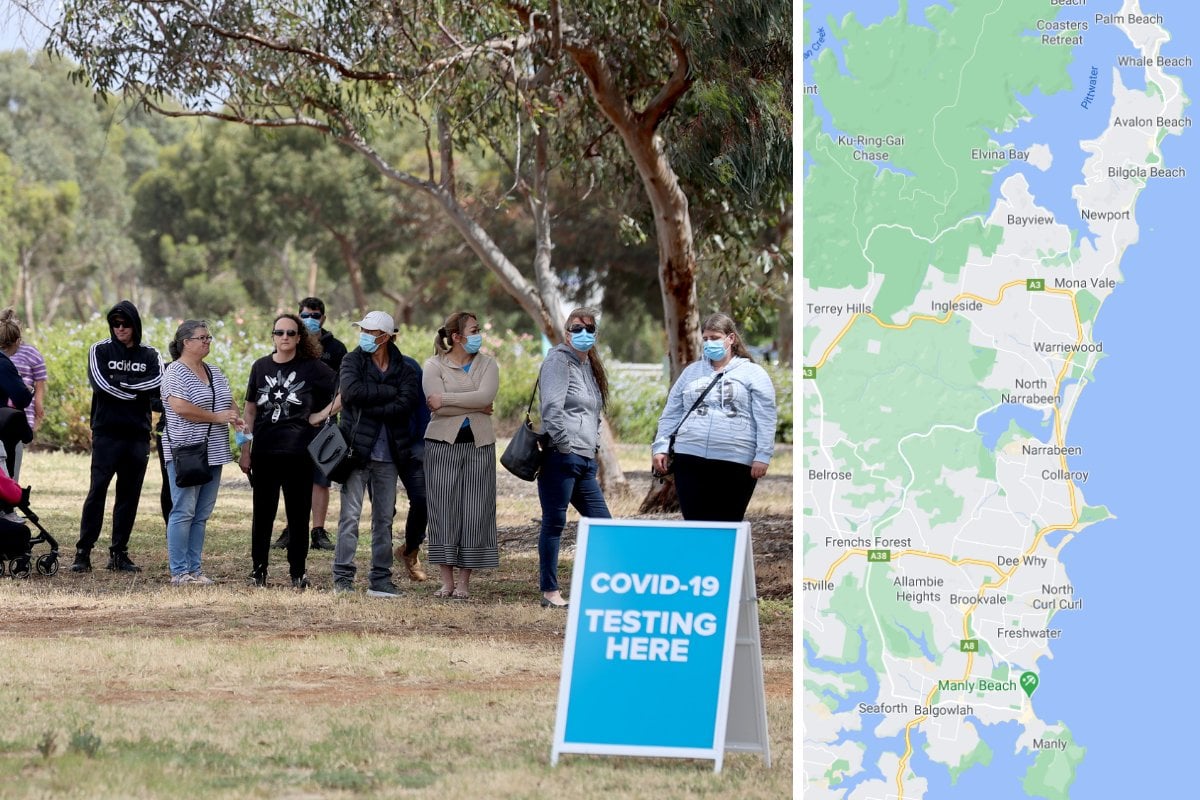 The Northern Beaches cluster of COVID-19 has ballooned to 17, with 12 new cases identified on Thursday.

Northern Beaches residents have been told they should work from home and stay home as much as possible for the next three days.

They should avoid aged care facilities and hospitals and other high-risk venues like gyms and places of worship, and avoid leaving the Northern Beaches area.

More cases are likely to be identified, NSW Health warns.

It is absolutely vital that everyone immediately comes forward for testing if they have even the slightest of COVID-19 symptoms, and self-isolates.

There are more than 300 COVID-19 testing locations across NSW, many of which are open seven days a week.

The source of the cluster remains a mystery, but authorities are investigating a potential super-spreader event at a Northern Beaches RSL.

The cluster has led WA premier Mark McGowan to order any arrivals in his state who were in NSW from December 11 to self-isolate until they test negative.

Tasmania elected on Thursday to ban anyone who had visited the venues on NSW's health alert list from entering the island state. Those in NSW who are set to travel to Tasmania must also reapply for their e-Travel pass. 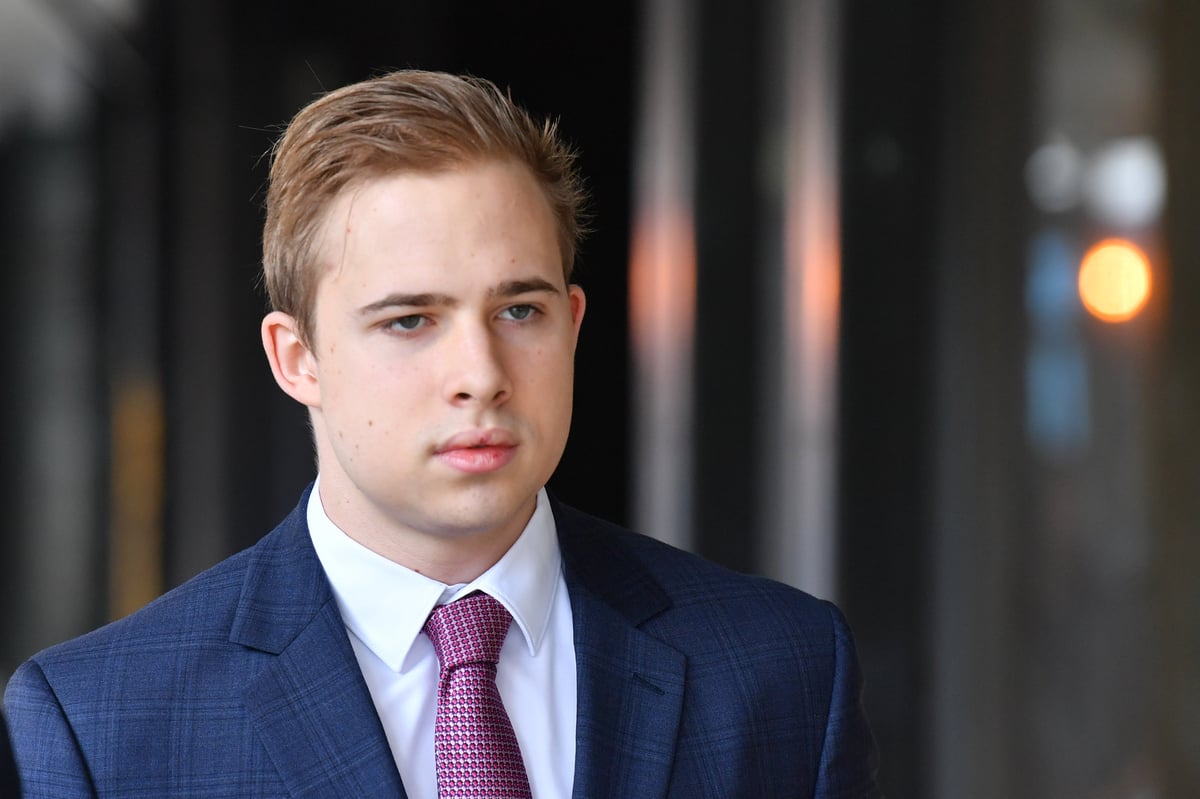 Former Sydney swimming teacher Kyle Daniels has been found not guilty of five charges against him including four counts of sexual intercourse with a child under 10 years old.

But for the remaining 21 charges, the jury said they were at a deadlock and would be unable to reach a unanimous verdict. They have been asked to continue deliberating.

The 22-year-old had pleaded not guilty to 26 charges, including multiple counts of having sexual intercourse with a child under 10 and indecently assaulting a person under 16.

He is accused of touching nine students aged between five and 10 on or near their genitals while instructing them between February 2018 and February 2019 at a Mosman pool on Sydney's north shore.

It follows a seven-week trial in which Daniels continually denied opportunistically touching his students for his own sexual gratification.

Earlier Judge Kara Shead reminded the jury there was "no rush" in reaching a decision.

A bus driver has been charged following a crash that killed a 24-year-old pedestrian outside Bondi Junction in Sydney's eastern suburbs.

The young woman was hit by the bus around 10.15am on Wednesday at Grafton Street, outside the busy shopping complex.

A pedestrian has died this morning after she was hit by a bus at Bondi Junction. @7NewsSydney pic.twitter.com/Rq8Sxw0Sc2

Witnesses performed CPR until paramedics arrived but the woman died at the scene.

The 41-year-old bus driver was taken to St Vincent's Hospital for mandatory testing.

He was later charged with a number of dangerous driving offences.

The man has been granted conditional bail to appear at Waverley Local Court January 19.

Israel's justice minister says he has signed an extradition order to send a former teacher to Australia to face charges of child sex abuse.

Justice Minister Avi Nissenkorn said that after a years-long legal saga, it was Israel's "moral responsibility" to extradite Malka Leifer.

Nissenkorn signed the order a day after Israel's Supreme Court rejected what appears to be Leifer's final appeal.

Leifer, a former educator accused of sexually abusing several former students at a Jewish school in Melbourne, has been fighting extradition from Israel since 2014.

Leifer maintains her innocence and the six-year legal battle surrounding her extradition has strained relations between Israel and Australia.

Nissenkorn did not announce an extradition date.

Kaufman said Leifer would not appeal the decision but would seek to serve her sentence in Israel if she is convicted in Australia.

Thunderstorms threaten most of NSW.

Much of NSW is reeling after an evening of heavy rainfall and thunderstorms, continuing a week of wild weather and chaos.

The warning zone for severe thunderstorms and heavy rainfall stretched over almost the entire state on Wednesday evening - from the Queensland border and Lismore in the north to Albury at the Victorian border, and taking in the entire Central West region.

Only the state's far west and pockets of the South Coast and Mid North Coast were set to be spared the drenching.

The predicted reprieve from heavy rain and flooding across swathes of NSW is unlikely to eventuate yet, with only the state's far west expected to be spared from afternoon thunderstorms. https://t.co/6yoF0DVOHv

Lismore in northern NSW was particularly soaked on Wednesday, copping 199mm between 9am and 5pm, with more than 120mm of that rain falling in just three hours.

The town faced flash flooding in the CBD and possible moderate flooding of the Wilsons River.

The weather agency warned that flood waters at Grafton, Ulmarra and Maclean would continue to rise on Thursday morning. The residents of Murwillumbah were also on alert for rising water levels at the Tweed River.

But there was some good news, with a number of evacuation orders and flood warnings throughout the state lifting on Wednesday afternoon.

Not again ☔️ .... The clean up is yet to begin 😔 pic.twitter.com/tlllhRqpgC

Since the downpours began on Saturday, the SES has attended more than 1900 jobs.

No new virus cases in the next week will hand South Australia an early Christmas gift as health officials are poised to draw a line through the worrying Parafield cluster of COVID-19 cases.

Authorities consider two incubation cycles, or 28 days, the necessary timeframe before an outbreak can be declared officially eliminated.

December 23 has been identified as the day after that period ends for the Parafield cluster, which still stands at 33 infections.

None of those cases are still considered active.

Chief Public Health Officer Nicola Spurrier said the cluster was "fairly unique" with a lot of information collected on all of those who became infected.

She said the last person went into isolation on the 24th of November.

A man has been charged with murder after the body of a woman was found at a home in the NSW Blue Mountains earlier this week.

Police were called to a Katoomba home on Tuesday morning and found the injured 73-year-old man, who was unresponsive and taken to hospital.

The body of a 71-year-old woman known to the man was found in a bedroom.

The man was discharged from hospital on Wednesday and charged with murder.

He has been refused bail to appear at Penrith Local Court on Thursday.

Attorney-General Jill Hennessy has stepped down from the role to commit more time to her family.

Ms Hennessy said, "This tough year has prompted many Victorians to think about their lives, their families, and the things that are most important to them."

"Political life can be hard on families. Mine is at a stage where they need more of me and even more importantly, I need more of them. Like everyone managing the collision between work and family life, sometimes something has to give, at least for a little while."

She will continue as an MP and contest the next election in 2022, but her departure is being reported as a "shock."

Daniel Andrews said Ms Hennessy had made a "courageous" choice.

- Denmark will impose a hard lockdown over Christmas and the New Year to limit the spread of COVID-19 with all shopping malls to close on Thursday and everything else to close from December 25.

- UK Prime Minister Boris Johnson says he won't outlaw Christmas gatherings, resisting pressure from some doctors to ban festive family get-togethers as the number of COVID-19 cases in London and other areas soar.

- Daily US deaths from COVID-19 have surpassed 3000 for the third time in a week.

- A missing ancient artefact, originally discovered inside the Great Pyramid, has been found in a cigar box in Scotland.