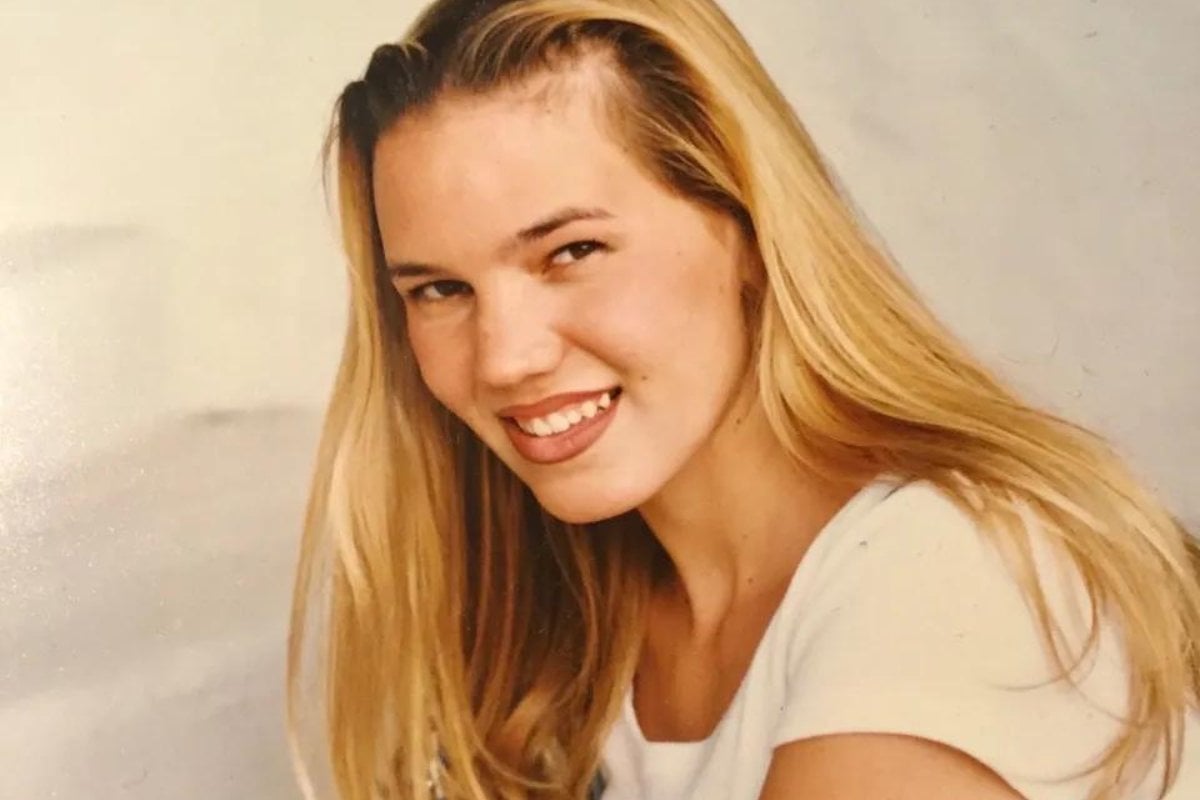 For more than two decades, Chris Lambert would pass by the billboard with Kristin Smart’s face on it. Kristin, a tall, athletic college student and lifeguard from California, had disappeared in 1996 at the age of 19.

Chris was just eight when Kristin disappeared, and he remembers it being “scary” that someone could go missing not far from where he lived. But it wasn’t until he was 30 that the singer/songwriter decided to find out what had happened to Kristin.

And so, he quit his job at a recording studio and started investigating Kristin’s disappearance.

Last year, when police announced arrests in the case, they gave credit to Chris and his podcast, Your Own Backyard.

Video via Inside Edition.

"What Chris did was take a local story and turn it into an international story," Sheriff Ian Parkinson said. "It did produce some information that I believe was valuable."

Kristin was just weeks away from finishing her first year of college when she went missing. She was studying communications, with plans to be a journalist.

"She definitely took advantage of life, seized the day," her sister Lindsey told CBS. "She was super ambitious and was determined to find the next adventure."

Kristin’s first year at California Polytechnic in San Luis Obispo – nearly 400km away from her family in Stockton – had been a bit of a struggle, but she had stuck it out.

On the night of Friday, May 24, she left a happy voicemail message for her mother, then went out with her friend, Margarita Campos. When Kristin decided to go to a party at a house near the campus, Margarita, who wanted to study that night, told her she was heading back to their dorm.

"And she was just kind of like looking at me like, ‘You're really walking away now?’" Margarita told CBS. "To this day, I was like, ‘Why did I just let her go by herself?’ I did have guilt about that."

In the early hours of the next morning, an older student, Tim Davis, saw Kristin lying on the lawn, apparently passed out. He and another student, Cheryl Anderson, decided to walk her back to her dorm. A third student, Paul Flores, joined them. In the end, Paul was left alone with Kristin. Paul said the last he saw of her was her walking towards her dorm.

She was never seen again.

Two days later, Margarita realised Kristin hadn’t returned after the party. All of her belongings, including her purse and ID, were still in her room, where she’d left them before going out on Friday night. Margarita reported Kristin missing to the campus police. They didn’t seem too concerned.

Meanwhile, Kristin’s parents, Denise and Stan, were wondering why she hadn’t called them on the Sunday like she normally would. On the Monday, they got a call from the campus police, asking if Kristin was with them.

When an incident report was written, it put the focus on what Kristin was doing at the party.

"Smart appeared to be under the influence of alcohol on Friday night," it read. "Smart was talking with and socialising with several males at the party."

According to CBS, two days after Kristin disappeared, the local police happened to take a mugshot of Paul, who was wanted for an outstanding DUI warrant. He had a black eye at the time. Days later, when he was questioned over Kristin’s disappearance, he said he got the black eye from playing basketball with his friends. When his friends cast doubt on that story, he told police he hit his eye on a steering wheel.

By the time police searched Paul’s room, college was finished for the year and the room had been cleaned. But then, cadaver dogs were brought into his dorm. Dog handler Adela Morris told a hearing last year that her dog, Cholla, alerted her to a room, giving "the strongest alert she's ever seen her do".

That room belonged to Paul.

Meanwhile, Stan had taken on the job of searching for his daughter – or her body – himself. In 2011, he told News 10 that he had driven from the family home to San Luis Obispo, a round trip of almost 800km, around 100 times. He hiked every nearby trail, looking anywhere a body could have been dumped.

"I crawled through so many drainage pipes, over road passes," he said.

Psychics sent him tips. One told him Kristin’s body could be found on the top of a certain hill, so he climbed up it in searing heat. A 'water witch' sent him to a lake, then a remote highway, then a public hospital. At the hospital, Stan asked if anyone matching Kristin’s appearance had been admitted.

"They gave me this look," he told the Los Angeles Times. "They said, 'Mr Smart, we feel very sorry for you. But she is not here.' They thought I had gone over the edge psychologically."

Denise, meanwhile, waited at home, by the phone, as police had told her to.

On the one-year anniversary of Kristin’s disappearance, Sheriff Ed Williams made an admission to the San Luis Obispo Telegraph: "We need Paul Flores to tell us what happened to Kristin Smart. The fact of the matter is we have very qualified detectives who have conducted well over a hundred interviews, and everything leads to Mr Flores. There are no other suspects. So absent something from Mr Flores, I don't see us completing this case."

Denise and Stan hired a lawyer and filed a wrongful death lawsuit against Paul in a civil court.

Six years after her disappearance, Kristin was declared legally dead. But her parents weren’t prepared to let things rest.

"When you don’t have your child, you’re fighting," Denise told Mustang News in 2015. "It’s a battle. And this battle is not over. There are times we get very weary, but you can’t quit."

Meanwhile, Kristin stayed on Chris Lambert’s mind because of the billboard. Every few years he would google her name. When he couldn’t find any new stories about her, he decided he would do something. Even though he had no experience as an investigator, he began tracking down people who might have information.

"I thought I’d give it a shot and see if I could get a few people talking," Chris told The Associated Press. "All I have to do is get over my shyness and start calling these people out of the blue and start asking really personal questions."

For the first few months, Chris didn’t contact Kristin’s family, thinking they wouldn’t want to talk. But then, when he turned up to a beachside memorial site for Kristin on her birthday in 2019, there was just one other person there: Denise. She invited him to dinner. They stayed in touch, and he visited the family in Stockton.

"Once I got that done, I thought, 'Okay, I think I have the first episode ready to go,'" Chris told New Times.

Chris spent 18 months researching the podcast, speaking to everyone from women who knew Paul before Kristin’s disappearance, to people who thought they might know where her body was buried.

Your Own Backyard became a huge hit. It attracted millions of listeners, and, more importantly, uncovered new information.

In April last year, Paul Flores, by then aged 44, was charged with Kristin’s murder.

“It is alleged that Mr Flores caused the death of Kristin Smart while in the commission of or attempted rape,” District Attorney Dan Dow said at a press conference.

Paul Flores’s 80-year-old father, Ruben, was charged as an accessory after the fact.

"The allegation against Ruben is that he helped to conceal Kristen's body after the murder was committed," Dow added.

Sheriff Parkinson said that "forensic physical evidence" had been found at "at least two homes" that they believed was linked to Kristin.

Even when the charges were laid, Chris didn’t feel his work was over.

"It's hard to feel a sense of relief when Kristin hasn't been recovered," he told KSBY. "It feels like that's the ultimate goal and the arrests are just one step towards that."

The trial is set to begin on July 6.

Chris has become close to the Smart family through the podcast, but can’t currently talk to them because of a gag order placed on the case.

"I’m looking forward to, whatever the resolution is, to just having that friendship again," he told The Tribune. "Aside from the case, I think we really care about each other."