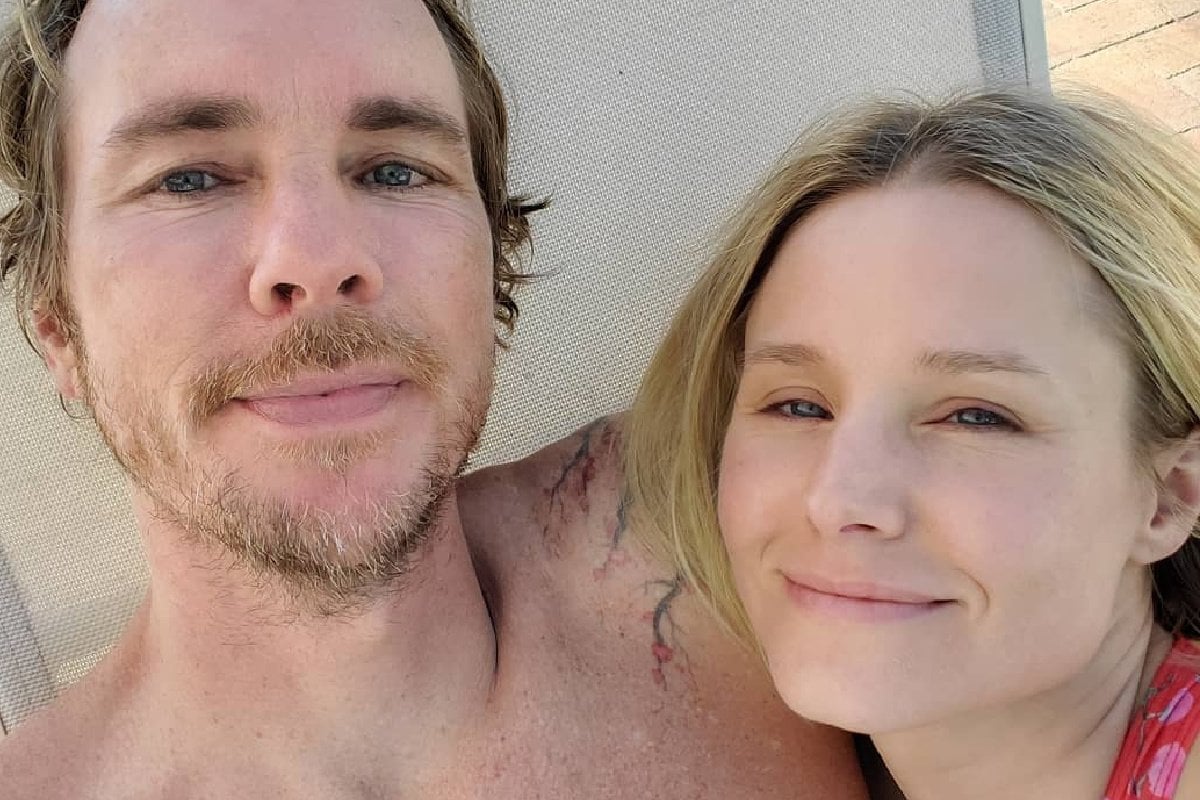 Kristen Bell and Dax Shepard are undoubtedly one of Hollywood's most-loved couples.

They have been together for 13 years, married for seven and share two daughters, aged six and seven.

But the first time the actors met in 2007, there were no sparks.

Watch: All the best moments from Kristen Bell and Dax Shepard. Post continues below.

"We were sitting at a table. The only thing I remember is that he talked so much. I was like, 'This guy can ta-alk!' And then I didn't know who he was... maybe one of the guys from Jackass or something."

"There were no sparks whatsoever," she added. "None."

Two weeks later, they met again at a Los Angeles Kings-Detroit Red Wings hockey game. (Bell and Shepard are both Red Wings fans and from Detroit.)

"We... started to flirt, left and then a day after that I get a text that says, 'Hi, this is Dax. I violated your privacy and got your number from Shawna. How do you feel about that?'" the Frozen star recalled on Sunday Today.

"And I was like, 'Excuse me? You sound stimulating.'"

Soon after, they were dating.

But after three months together, the couple briefly called it quits.

"We were dating for about three months, and I already knew that I was in love with him and he was hesitant because he knew he was still dating other people," Bell told Popsugar years later.

"He sat me down and said, 'I can’t have this right now. I think you’re wonderful, but I am still dating other people.' And then I, like, liquefied and fell to the ground, but I felt incredibly respected that he had the balls to tell me we weren’t in the same place."

Shepard quickly realised that he made a mistake.

"He called me and he was like, 'I don’t know what I was thinking. I was dating someone else, but they’re just not as interesting as you, and I don’t know what I’m doing,' and he came back. But I still always remind him of when he broke up with me."

"All the things I'd done were terrifying to her."

During their first year of dating, Shepard struggled with their relationship. Despite coming from the same city, the actors came from very different backgrounds. The Parenthood star has battled addiction since the age of 18 and previously abused cocaine and alcohol.

"Kristen’s a good girl. She grew up very Christian, went straight to college, did great in school and started work immediately. She’s charitable and philanthropic and rescues dogs," he told People.

"All the things I’d done were terrifying to her, and she had a hard time believing I would ever be able to stay married and monogamous and a father and all those things. For the first year-and-a-half we were together, that was what we battled over almost weekly."

In 2009, the couple appeared in the rom-com When In Rome together. 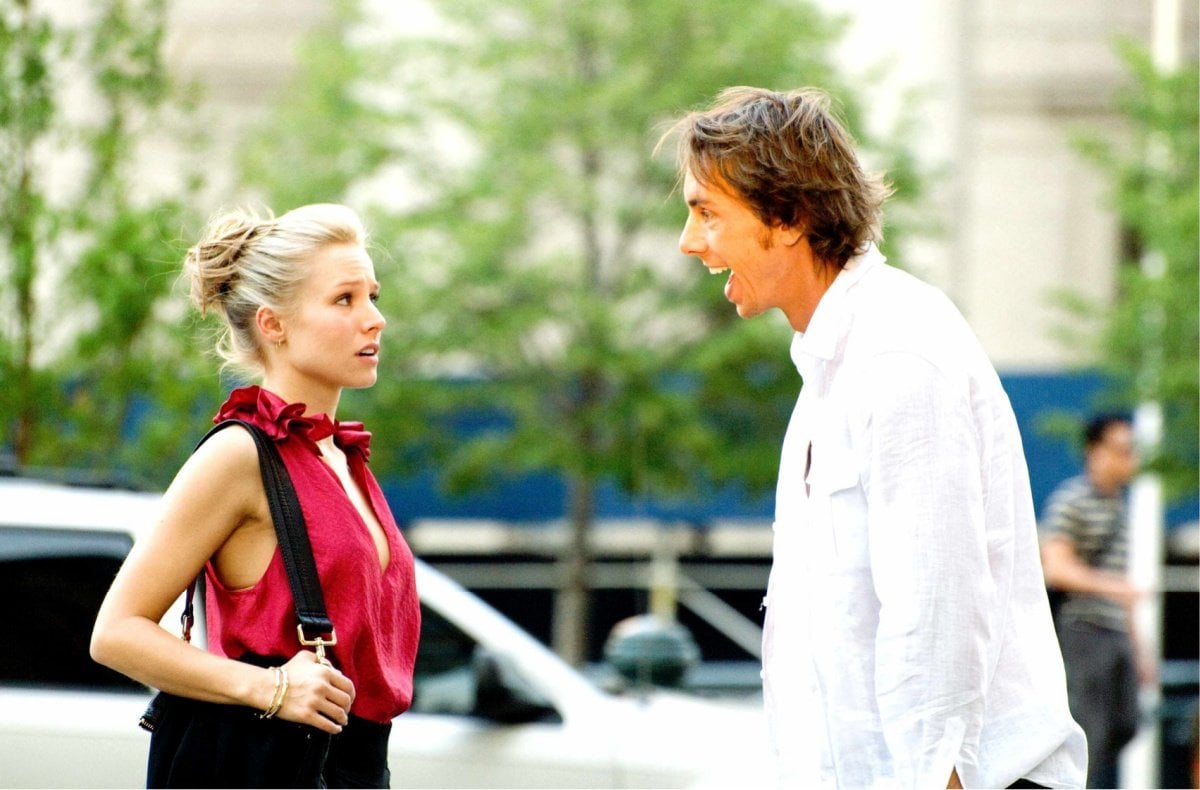 Initially, Shepard hadn't wanted to get married. But after he realised how important it was to Bell, he changed his mind.

"He has a great argument that the state having a piece of paper doesn’t mean he’s going to be nice to me and by my side for the rest of my life," Bell told USA Today. "[Instead] that is going to be evidenced by how we treat each other and the commitment that we make.

"I had surrendered, like, 'Okay, well, I’m never going to get any sort of traditional marriage out of this, and that’s okay because I trust him."

"Forget the tradition or history of marriage as a concept," Shepard said speaking to Bell. "You knowing I was doing something that I didn’t want to do because I loved you was a big sign for you."

In 2012, the couple starred in another film together, Hit and Run. Shepard directed, wrote and produced it.

Lincoln Bell Shepard is here. She has mom's beauty and dad's obsession with breasts. Hooray!!!

In October 2013, a few months after same-sex marriage was legalised, the couple wed at the Beverly Hills Courthouse. They'd waited for the law to pass, in solidarity with the LGBTQI community.

.@daxshepard1 will you marry me? Xo #marriageequality #loveislove”

"We wanted the lowest-key day possible," Bell later told Jay Leno. "Then we got sandwiches and called it a day. We called that our wedding brunch."

In December 2014, their second daughter Delta was born.

Delta Bell Shepard is here. She doesn't look like either @IMKristenBell or me, but we're gonna keep her anyway. #christmascameearly

Bell admitted that couples therapy was the best thing for their marriage in those early years.

"Our relationship wasn’t perfect," she told Entertainment Tonight. "We had a couple years of fighting and of growing pains and hating each other, then loving each other and going to couples therapy and we worked it out...

"We earned each other."

In 2016, Bell openly spoke about her husband's sobriety.

"My husband is in recovery and is almost 13 years sober," she told E! News. "Seeing the world through his eyes has really opened mine to knowing that it is a disease and nobody is choosing to drink more than others."

She also opened up about her own struggle with depression and anxiety in an essay for Time.

"For me, depression is not sadness. It’s not having a bad day and needing a hug. It gave me a complete and utter sense of isolation and loneliness. Its debilitation was all-consuming, and it shut down my mental circuit board. I felt worthless, like I had nothing to offer, like I was a failure.

"Now, after seeking help, I can see that those thoughts, of course, couldn’t have been more wrong. It’s important for me to be candid about this so people in a similar situation can realise that they are not worthless and that they do have something to offer," she wrote.

These days, Shepard hosts his own podcast titled, The Armchair Expert. Each week, he and his co-host, Monica Padman, interview celebrities, journalists and academics.

On the latest episode, however, it was Shepard in the guest chair, where he opened up about his recent relapse with prescription opioids after 16 years of sobriety.

The actor said that his first slip up came in 2012 after a motorcycle accident.

"I immediately called my sponsor, and I said, 'I’m in a tonne of pain and I [have] got to work all day, and we have friends that have Vicodin.'

An episode I hoped I'd never have to record, but one I felt I owed to all the beautiful Armcheries who have been on this ride with me for the last couple years. This was Monday, say today is 11.

Shepard explained that, during this time, he was went to visit his father who was undergoing cancer treatment, but as Bell was the only one who could give him painkillers, he left them at home. When he was there, he took some of his father's prescribed Percocet — another kind of opioid.

"You know, we had so little in common and so much f**king friction," Shepard recalled. "But the number one thing we had in common was we were both f**king addicts and we had never used anything together. And we sat there stoned and looked at the lake. And in that moment I felt elation, and I was just happy."

Later, when Bell joined him to offer support with his dad, Shepard admitted relapsing.

"That was eight years ago," Shepard continued. "I've now had this experience where I did that, I felt bad, but there wasn't any fallout from it. It was like, I felt bad, I said I felt bad, and then I did just move on, and it was fine."

Shepard then explained that since that incident, he's experienced more injuries and undergone several surgeries, and so he continued to take two Vicodin at the end of the day to help with the pain. For a while, that didn't seem like a problem.

Until he started buying extra to supplement his prescription, to the point that he was on the drugs all day and his behaviour became "shadier and shadier".

"I'm lying to other people and I know I have to quit. But my tolerance is going up so quickly that I'm now in a situation where I'm taking, you know, eight 30s a day, and I know that's an amount that's going to result in a pretty bad withdrawal. And I start getting really scared, and I'm starting to feel really lonely. And I just have this enormous secret," he explained.

Less than two weeks ago, Shepard approached his co-host Monica Padman and his wife to come clean about everything. He apologised and asked for help.

"I've had a lot of friends that I've watched go through this whole cycle and I finally have the humility to say I will not be any different. I won't be special. I won't be smarter. I will be exactly like everyone else," he said.

Shepard has now been clean for 12 days.