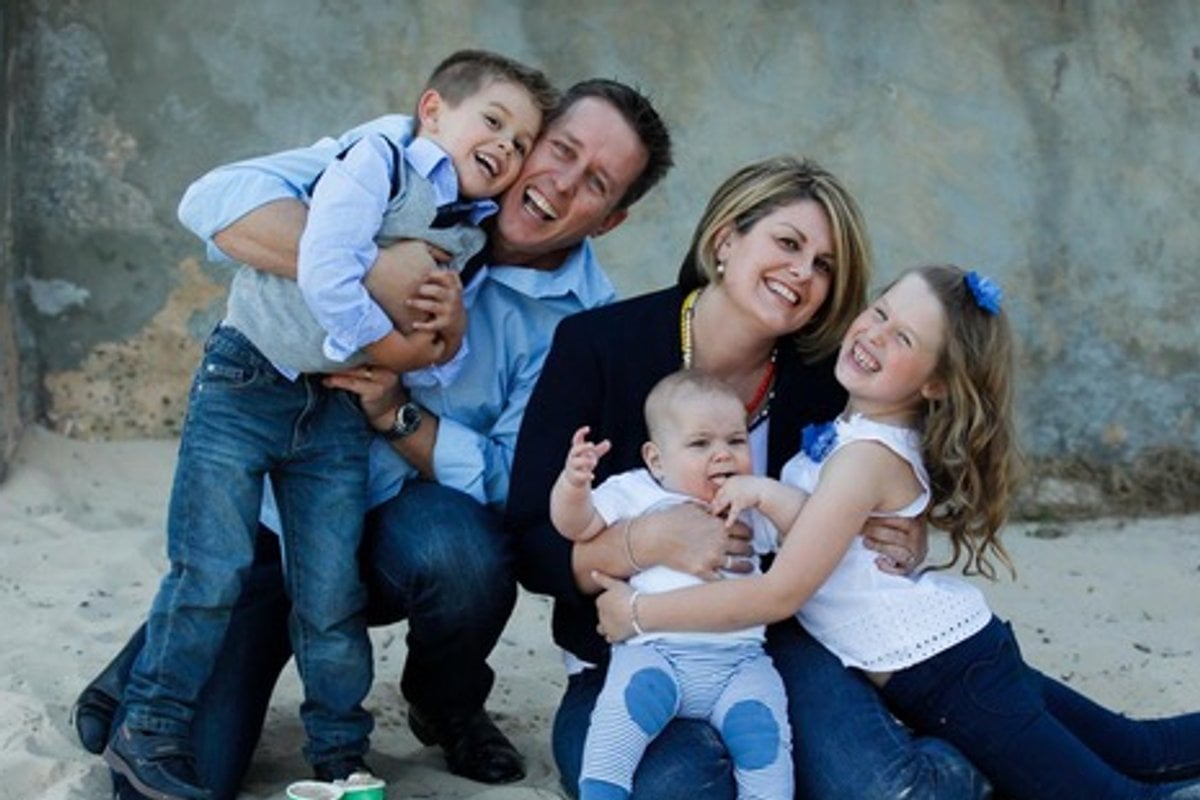 This post deals with the death of a child and may be triggering for some readers.

It only took a second.

One second and two steps for Michelle McLaughlin and her family’s life to change forever.

"It’s the most harrowing thing… For an accident to occur and take Tom’s life in those microseconds was a dreadful, dreadful shock," Michelle told Mamamia.

On January 6, 2014, Michelle and her husband were holidaying on NSW’s Central Coast with their three kids, seven-year-old Sophie, four-year-old Tom and one-year-old Hugh.

Enjoying the Christmas holidays, the family woke up with plans to head down to the beach.

"However, it was around 42 degrees that day so we ended up staying in the [holiday] house with the air conditioning, playing board games, reading and just had a lovely day together," Michelle recalled.

By the early evening, Michelle’s in-laws had arrived, and the family decided it was cool enough to head down to the beach.

Excited to use his surfboard he received from Santa, Tom made his way to the front of the property with his grandparents just before 6pm. His father and sister followed behind, while Michelle was inside changing Hugh into his swimwear.

"Tom was standing there on the edge of the grassy verge [ahead of the road] with his grandparents. He wasn’t doing anything outlandish or needed to be spoken to in any way to calm down. He was just standing there.

"He was a very cautious child, and he knew the road safety rules because I had spent quite a lot of time teaching him and his sister. Safety is my number one thing," said Michelle, a former nurse at Sydney's Royal North Shore Hospital.

Then, in front of his family, "Tom took two steps" on the road. "Which was enough on this skinny little road that had cars parked up and down it and that would be an abstraction for an oncoming driver".

"As he steps, he puts himself in front of a four-wheel drive that was travelling at 53 kilometres per hour."

Back inside, Michelle saw her husband and daughter run back up the driveway from the kitchen window.

"The look on their faces was sheer horror and terror."

"Immediately I was thinking something has happened to one of my in-laws. That was my first thought. I did not think for one second that a terrible thing had happened to Tom. That didn't occur to me until I walked up the driveway and was presented with this devastating site."

An ambulance was quickly called, but the accident had tragically taken Tom's life.

"When you're in that scenario, you are in adrenaline overdrive and you are doing everything you can naturally. But it was fatal. And it was confirmed as soon as the ambulance arrived and placed a de-fib on top [of Tom]." 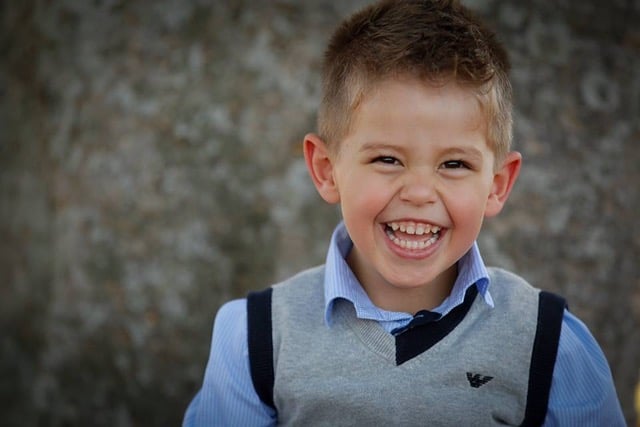 For Michelle, the following days were a blur.

"I remember just being in such shock that I just walked around in a daze or I had to lie down. I couldn’t even turn the kettle on, I was rendered useless," she recalled.

"It's just the most dreadful existence really, particularly that first 12 months when you're just trying to function."

With the support of family and friends, Michelle and her husband tried "to dig deep and be brave" for their other two children.

"It is a real challenge to get back up and rise again. When you have gone through an experience such as our family has, you've got to get a strategy and you've got to find meaning and purpose. And that takes a long time to get it all together again."

Tom's death was particularly hard on seven-year-old Sophie at the time.

"He was her constant companion, and they adored one another. They didn't really fight ever, and they did so much together. So when he was killed, it left quite an impact on her."

Looking back on those times, Michelle says both Sophie and Hugh "helped her survive" day by day.

"My children probably don't have any understanding of that, but they have been a source of joy and comfort. And that helps carry you through."

Counselling and the words from others also provided comfort.

"I got a lot of advice from people about what I should or shouldn't be doing and 'living one day at a time' was probably the best advice anyone ever gave me. Looking too far back or too far forward just causes pain."

Seven years on, the family still remember Tom as the happy, affectionate and caring boy he was. These traits Michelle now sees in Hugh, who is almost nine.

But while the family have pulled through the tragedy, Michelle says there is still "a hole that is left behind".

And sadly it’s one many other families have had to experience for themselves.

Between January 2014 and July 2021, 430 children, including Tom, have lost heir lives to road trauma, making it the most common cause of death of children in Australia aged one to 14.

"That is one child a week, if you average it out," says Michelle who compared it to Australia's equally horrifying domestic violent statistics.

"One woman a week loses her life [by her current or former partner] and one child a week loses their life to road trauma be they pedestrians, cyclists, or in vehicles. It's quite shocking, and it's certainly something that Australians need to know."

That's why Michelle started the Little Blue Dinosaur Foundation; to raise awareness and educate the community on pedestrian road safety for children.

The foundation, created the year Tom died, was inspired by the drawings of dinosaurs that Michelle found in his room after his death.

"I thought these little blue dinosaur drawings are trying to tell me something, I need to raise awareness... I need to prevent this happening to families."

"The loss of a child is the most devastating situation to find yourself in and it happened to us in a split second, and we are very hyper vigilant safety conscious family. I've never, ever let my children out on a road or in a car park without holding my hand. And yet here I am, in this dreadful predicament."

Over the past seven years, the Little Blue Dinosaur Foundation has been working with councils to help install colourful signs in 63 Local Government Areas to remind locals and holidaymakers to slow down and hold their child's hand.

"There are 537 councils in Australia and I think they should all be participating in our signage campaign 'It’s Holiday Time' during the holiday period. There are lots of children in our community, the school zones are not functioning and we need to be aware as drivers to slow down." 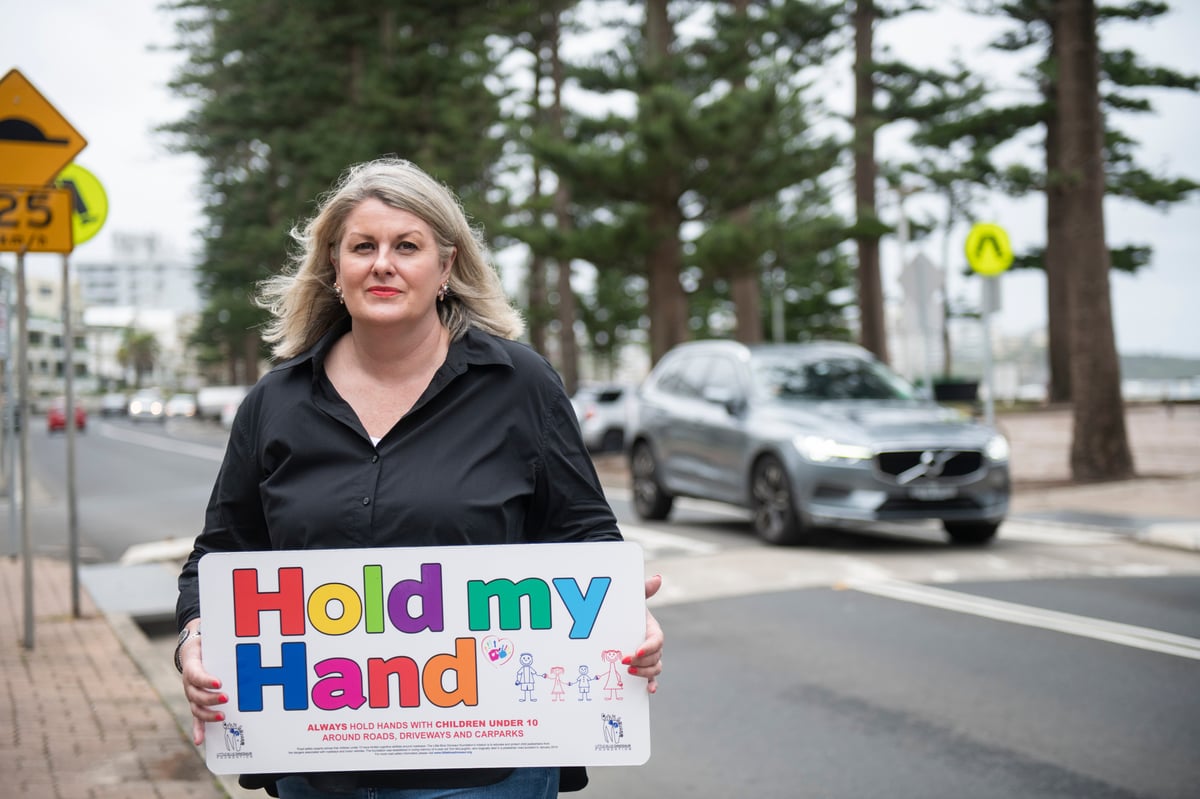 Michelle has also partnered with the University of New South Wales Transport and Road Safety group to analyse coronial data around the causation of child pedestrian road safety accidents which will be delivered to council partners.

As well as helping to prevent road accidents, Michelle is currently launching and calling for donations for her Road Trauma Grief Support Packages for families. The 12-month long care packages contain vouchers for child care, cleaning, domestic, and cooking services to help support families through such a tragedy.

With Christmas holidays and the eight-year anniversary of Tom's death approaching, Michelle has a clear message for parents about holding their child's hand, which she says is "just as important as putting a seatbelt on them in the car".

"I loved my son deeply, And I miss him every day," she said through tears. "I would just say to everybody, while you are enjoying yourself these holidays, please remember child road safety. Keep it in the front of your mind because your life can turn upside down in a microsecond.

You can find out more about the Little Blue Dinosaur Foundation here or donate to their Road Trauma Grief Support Packages here.

A
alee a month ago

Reply
Upvote
So terribly sad, I commend Michelle for raising awareness and working hard to help prevent others experiencing such a tragedy. The same accident almost occurred to my four year son in exactly the same circumstance. By some miracle I managed to yank him away from the four wheel drive that didn't see him as he walked onto the road in front of parked cars within warning. It could have easily ended in tragedy and I am so thankful every day that it didn't. I wouldn't be as strong as this courageous woman. My heart goes out to her and her family.
News
General
Opinion
True Crime
Politics
Sport
Explainer
Entertainment
Celebrity
Reality TV
Movies
TV
Books
Rogue
Royal
Lifestyle
Beauty
Fashion
Weddings
Home
Wellness
Health
Fitness
Travel
Food
Parents
Before The Bump
Pregnancy
Baby
Kids
Teens
School
Parent Opinion
Work & Money
Money
Finance
Career
Lady Startup
Relationships
Sex
Dating
Separation
Friendship
Family
Real Life
Couples