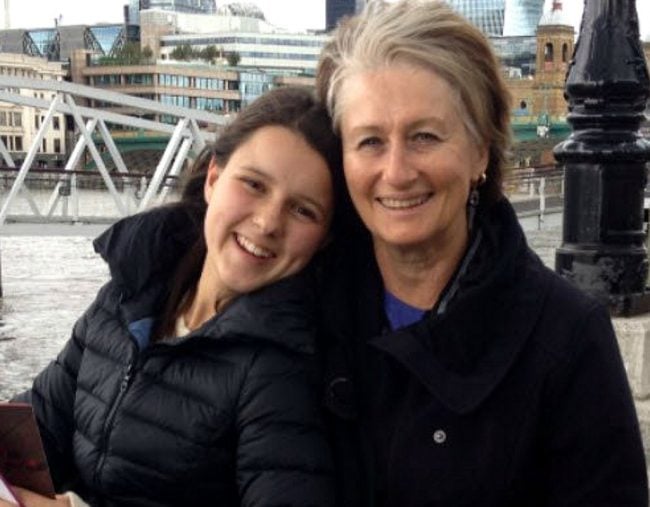 Kerryn Phelps is very likely to become Australia’s newest member of parliament as vote counting ends for the Sydney seat of Wentworth.

On Saturday night, when her victory looked certain, Dr Phelps thanked her family for their support. A family that includes her wife Jackie Stricker-Phelps, her two adult children from her previous marriage, and her teenage daughter Gabrielle Stricker-Phelps.

Gabi, who graduated from the prestigious Ascham School in Sydney’s east as a prefect with a top ten per cent HSC score last year, has been vocal about the incredible way she came into her mums’ lives.

Because the 19-year-old’s future hasn’t always been as bright as it is right now.

In 2009, at the age of nine, Gabi was removed from the care of her biological mother.

Caught up with Senator Dean Smith at #sydneymardigras2018

The little girl hadn’t even read a book when she arrived at the Stricker-Phelps’ home. Dr Phelps had treated Gabi’s biological mother as a GP years earlier and was asked if she could provide three weeks of emergency foster care to Gabi, the Daily Telegraph reported, when first sharing Gabi’s story in 2013.

That three weeks turned into years of loving foster care before Gabi was eventually adopted by Phelps and her wife in 2012.  She was the only non-relative Australian child adopted in NSW that year and the first non-relative adoption by a same-sex couple ever in the state.

That shockingly small rate of adoption is why Gabi and her mothers became such strong advocates for the legal adoption of neglected Australian children.

“It is beyond scary to imagine that if I had not been removed from my biological parent that my health would have deteriorated even more than it already had when I was finally removed at nine years of age,” Gabi told the Daily Telegraph at age 14.

The adoption process wasn’t easy. Jackie Stricker-Phelps has previously described it as “like working your way across a heavily laden active minefield”.

Speaking about adoption at a Barnardos Australia charity dinner in 2013, Gabi described her mums as her “secure rocks”, who make her feel “safe and loved”.

Last year she received a Dame Marie Bashir Peace Award from the National Council of Women of NSW, for a project she spearheaded called ‘I See You’, that aimed to make every girl at her school feel acknowledged. When accepting the award, she explained that her experience of years of neglect had motivated her to pursue this project.

“I know how it feels to be unseen,” she said. “The system just didn’t seem to see me or to recognise that what I needed was long-term security.”

And since 2009, – thanks to Kerryn Phelps and Jackie Stricker-Phelps – that’s what Gabi has had. She was a proud campaigner alongside her mothers for same-sex marriage during the postal vote in 2017 and like them, is an advocate for adoption.