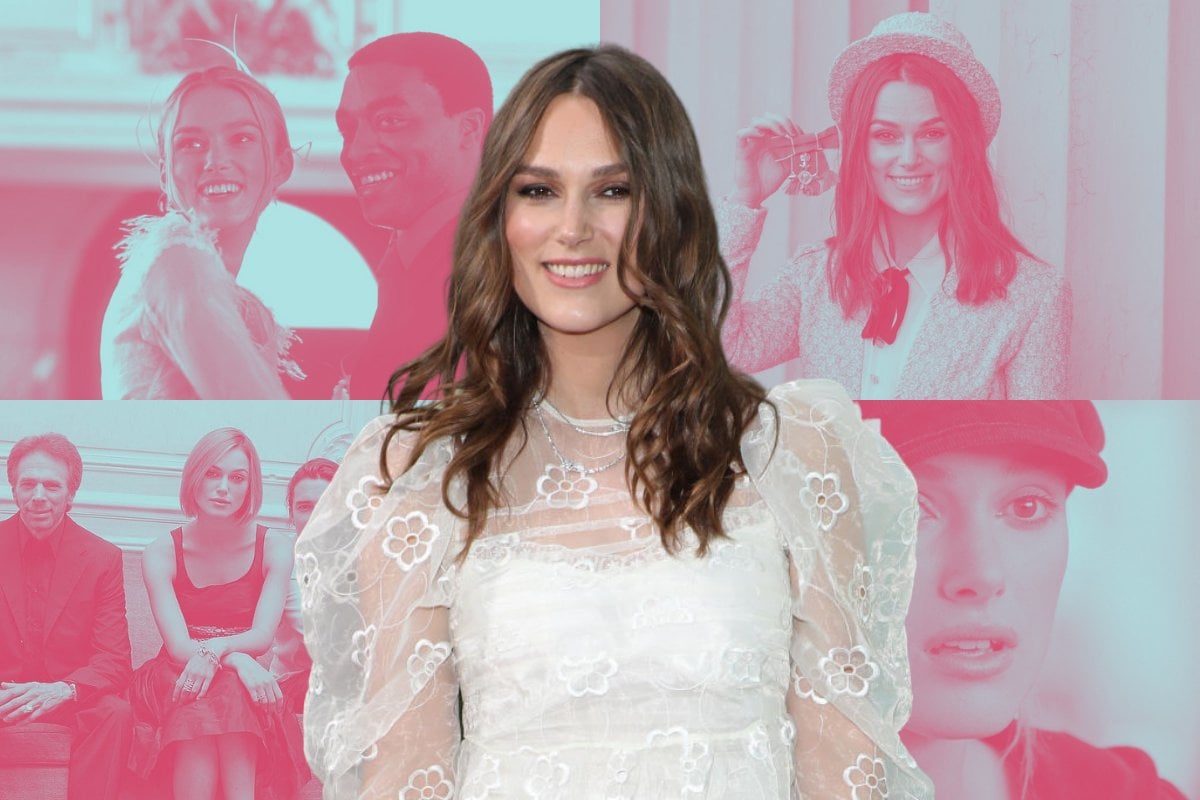 Keira Knightley was just 18 when she starred in Love Actually.

Knightley, the daughter of two actors, started asking for her own agent at the age of three, and left school at the age of 17 to focus on acting.

Watch the trailer for Love Actually. Post continues below.

By the time Love Actually came along, she was already famous, having starred in Star Wars: Episode 1 – The Phantom Menace, Bend It Like Beckham and Pirates Of The Caribbean.

It was an incredibly successful run of movies for the young actress. But with so much of the media coverage focusing on her looks and questioning her acting ability, Knightley was taking some massive blows to her self-confidence.

“From the inside, all you’re hearing is the criticism, really,” she told The Hollywood Reporter. “And, also, I was aware that I didn’t know what I was doing, you know?”

Even being nominated for an Oscar for Pride & Prejudice at the age of 20 didn’t give Knightley confidence in her acting ability. She was still hearing the criticisms, and the media obsession with her looks continued.

“I felt pretty much like actually I didn’t exist and I was this weird creature with this weird face that people seemed to respond to in quite an extreme way, and I couldn’t quite figure any of it out.”

It didn’t help that she was being trailed by as many as 20 paparazzi at any one time, sometimes baiting her in the hopes of getting photos of her losing control.

After making Atonement and The Duchess, Knightley went through what she calls “my crash”. She didn’t leave the house for three months and needed hypnotherapy to walk the red carpet at the BAFTAs without a panic attack.

“I did have a mental breakdown at 22, so I did take a year off there and was diagnosed with post-traumatic stress disorder because of all of that stuff.”

Knightley travelled, and spent a lot of time in therapy. And then, one day, she had an epiphany.

All of a sudden, Knightley “didn’t care” what other people thought of her. She went back to making hit movies, but without the self-doubt.

Not long afterwards, Knightley met musician James Righton from indie band the Klaxons through a mutual friend at a dinner party.

“We were very drunk,” she remembers.

The couple married in May 2013, with just a handful of friends and relatives. The following year, Knightley told The Guardian that they liked to stay in and read books.

“We’re basically geeks,” she says. “Weirdly, his degree was in history and politics, so he’s a big history buff.”

Knightley was determined not to sugarcoat any part of motherhood, including childbirth.

“My vagina split,” she wrote in an essay in the book Feminists Don’t Wear Pink (And Other Lies). “You came out with your eyes open. Arms up in the air. Screaming. They put you on to me, covered in blood, vernix, your head misshapen from the birth canal. Pulsating, gasping, screaming.”

She went on to talk about the pain of Edie latching onto her nipple for the first time, and all the other details of those first moments of her baby’s life.

“I remember the shit, the vomit, the blood, the stitches.”

When Edie was a toddler, Knightley said that even though she could afford good childcare, she still found parenthood “really f**king difficult”.

“It doesn’t mean I don’t love my kid, it’s just me admitting that the sleep deprivation, the hormonal changes, the shift in relationship with my partner, are all things that make me feel as if I’m failing on a daily basis,” she told Balance.

Baby number two, Delilah, came along in 2019. It was while Knightley was pregnant with Delilah that she read the script for Silent Night, a horror-comedy where a group of friends get together to celebrate Christmas before taking their lives to avoid dying in an environmental catastrophe.

“I was very pregnant when I read this script and I thought it was the funniest thing. I literally howled with laughter,” Knightley told EW. “Then when we came to do it when my kid was about five months old, I read it again like, ‘This is not funny at all! This is the opposite of funny, what the f--- was I thinking!?’”

She says the movie speaks to “a weird maternal psyche”.

“You've got the fluffy love of bringing life into the world but in doing that you're made unbelievably aware of the fragility of life and that death is absolutely side-by-side with life.”

As for Love Actually, Knightley hasn’t watched it since it was released. By 2018, she’d forgotten whether her character Juliet stayed with her husband or not.

“I don’t remember,” she whispered to Mackenzie Foy when they were being interviewed for Wired. “Who do I end up with in that movie?”

Since then, Knightley has been reminded of how Love Actually ends.

“Yes, I know that I stay with my husband!” she told EW. “I must watch the film, I know. It's just very odd watching films that you're in! It's just a bit weird!”