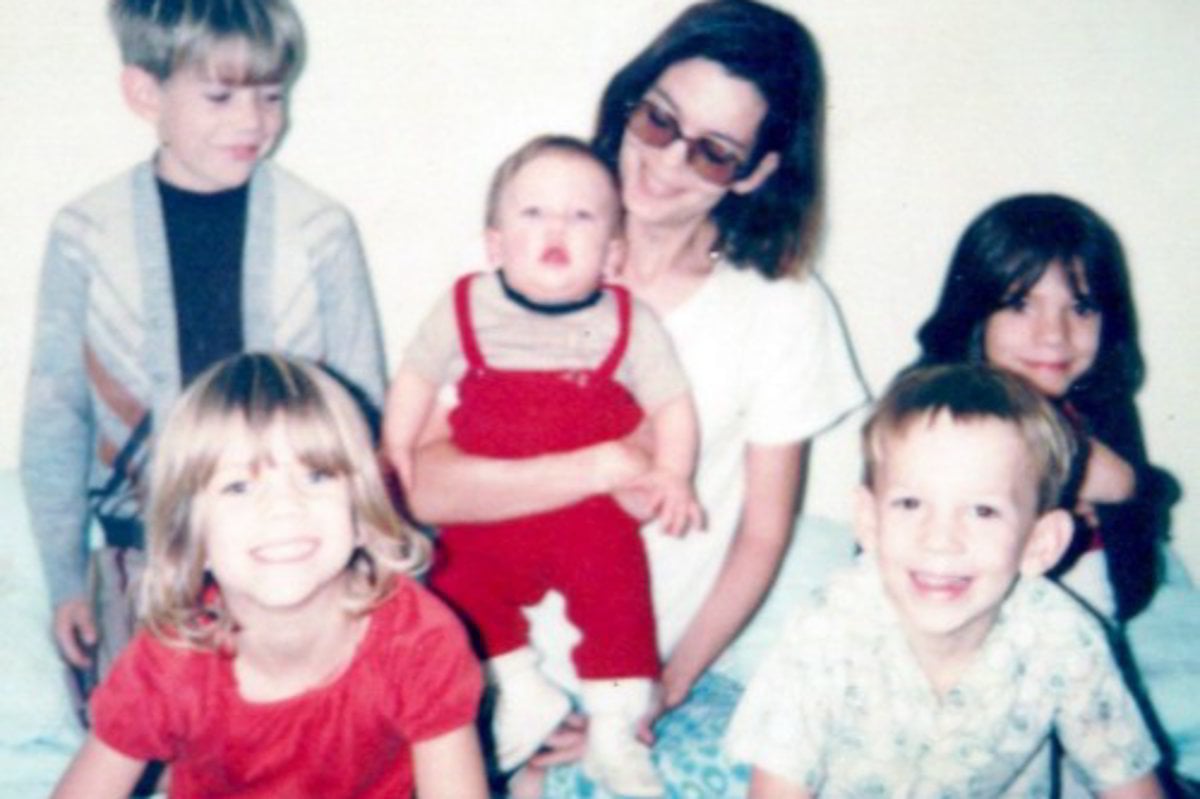 In 1980, Sue Sharp made up her mind to leave her allegedly abusive husband.

She took her five children, whose ages ranged from five to 15, and moved them to the Sierra Nevada mountains in California. The family made a new home in a wooden cabin in the resort town of Keddie.

The setting was idyllic. But just a few months later, Sue, her oldest son and her son’s friend would be found brutally murdered in their cabin, and Sue’s youngest daughter would have vanished.

Fourteen-year-old Sheila was spending the night with the Seabolt family in the cabin next door.

John, 15, and his friend Dana Wingate had gone to the nearby town of Quincy to catch up with friends, but were planning to be home later that night.

Mum Sue was looking after Tina, 12, Rick, 10, Greg, five, and their friend Justin Eason, who was sleeping over.

At 7:45am the next day, Sheila arrived home from the Seabolts. She opened the front door of her family’s cabin to a scene of horror.

The bodies of her mother, John and Dana lay on the floor. They’d been attacked so brutally that the ceiling was spattered with blood. Rick, Greg and Justin were asleep in a bedroom. Tina was nowhere to be found.

Sheila ran back to the Seabolts’ cabin. The Seabolts helped the three boys out of the bedroom window so that they wouldn’t have to see the bodies. Police arrived soon afterwards.

All three victims had been bound, and Sue had been gagged with her own underpants.

The only items missing from the house were Tina’s shoes and jacket, and a box of tools.

The police were told that Tina was missing, but it was several hours they took this information seriously and began a search.

No trace of her could be found.

At first it was believed that the three young boys had slept through the whole thing, but then police found blood on the inside doorknob of the bedroom that they were sleeping in.

Justin changed his story several times – saying he’d seen nothing, saying he’d witnessed the murders, saying it had all happened in a dream that took place on a boat (he’d been watching The Love Boat before going to bed).

He was put under hypnosis and questioned by police, but it was hard to know if any of the information he gave was helpful.

There were two main suspects. One was Justin’s stepfather Marty Smartt, who lived in a cabin just a couple of doors down. He was a Vietnam vet suffering PTSD.

The other was John “Bo” Boubede, a former bank robber with links to organised crime. He was staying with the Smartts. On the night of the murders, Marty and Bo had been drinking at a nearby bar.

Marty was allegedly abusive towards his wife Marilyn, and it’s believed that Sue had been encouraging her to leave him.

When Marilyn was interviewed by the police, she said she’d left Marty the day after the murders.

Both Marty and Bo were eliminated as suspects after being interviewed by the police. They left town. No arrests were made.

Three years and 11 days after the murders, a bottle collector found part of a skull near Feather Falls, more than 120km by road from Keddie.

An anonymous call to police suggested it might be Tina’s. As it turned out, it was. More remains were found.

Tina was buried with her mother and brother.

Years went by without any progress being made in the case.  Robert Silveria, the Boxcar Killer, confessed to the four murders in 1996.

However, it was later discovered he was in custody for another crime at the time and he recanted his confession. Boubede died in 1988 and Smartt in 2000.

The cabin where the murders had taken place, which had become a drawcard for kids looking for a scare, was demolished.

Sheila developed a drug addiction due to the trauma.

"I then realised that the drugs weren't going to do anything good for me, so I left that behind," she told the Mail Tribune. "Also, I had a kid at the time, and I thought it wasn't fair for him to suffer for my actions."

Twenty years after the murders, Dana’s father Gary said he’d tried to put it behind him.

“Nobody has the faintest idea who killed my son, so I long ago had to let this thing go or it would eat me alive,” Gary told SFGate. “But I do know this. There is evil in this world, and evil was in that house that night.”

Greg Hagwood was 15 when the murders happened, and John and Dana were his classmates. His mother had been Tina’s teacher. Thirty-five years later, as county sheriff, he ordered the case to be reopened.

“For me, personally and professionally, it's been a dark cloud hanging over your shoulder,” he told KOLO in 2016.

Hagwood asked Mike Gamberg, a retired cop, if he would take on the investigation.

Gamberg had taught both Johnny and Dana martial arts, and Dana had been at his house the day before he died. But he hadn’t been allowed anywhere near the original case. He jumped at the chance to work on it.

“If the right things had been done, this thing would have been solved within weeks of the homicide,” he told KOLO.

Once the word got out that the case was being reopened, information came flooding in.

“I'm telling you, the internet went nuts," Gamberg said. "My phone was ringing off the hook."

One tip led to the discovery of a hammer in a pond, believed to be one of the murder weapons.

Gamberg also came across a letter written from Marty to Marilyn after the murders.

“I’ve paid the price of your love & now that I’ve bought it with four people’s lives, you tell me we are through,” it read. “Great! What else do you want?”

The letter hadn’t been listed as evidence.

On top of that, Gamberg tracked down a veterans’ counsellor in Nevada, who Marty had allegedly confessed to. The counsellor had passed the confession on to authorities at the time, but nothing was done about it.

Hagwood told The Sacramento Bee that he believed there were several people involved in the murders beyond the two dead suspects. He also believed the motive for the murders was related to Tina’s abduction.

“If you kill three people in a front room and extract the little girl from a bedroom, a motive has to be attributed to her,” he said. “There’s no end to speculations on why.”

Sheila told CBS Sacramento that she was starting to have hope that the case might finally be cracked.

“I actually put in my mind that I’ll probably go to my grave, that it will never be solved, and then when all this is coming out, it brought up the hope again,” she said.

In 2018, the Plumas News announced that tape that had been used to bind one of the victims had been found to have DNA on it. Gamberg said the DNA matched that of a known living suspect.

However, as yet, no arrests have been made. Almost 40 years after the terrible killings, the Keddie murders remain unsolved.