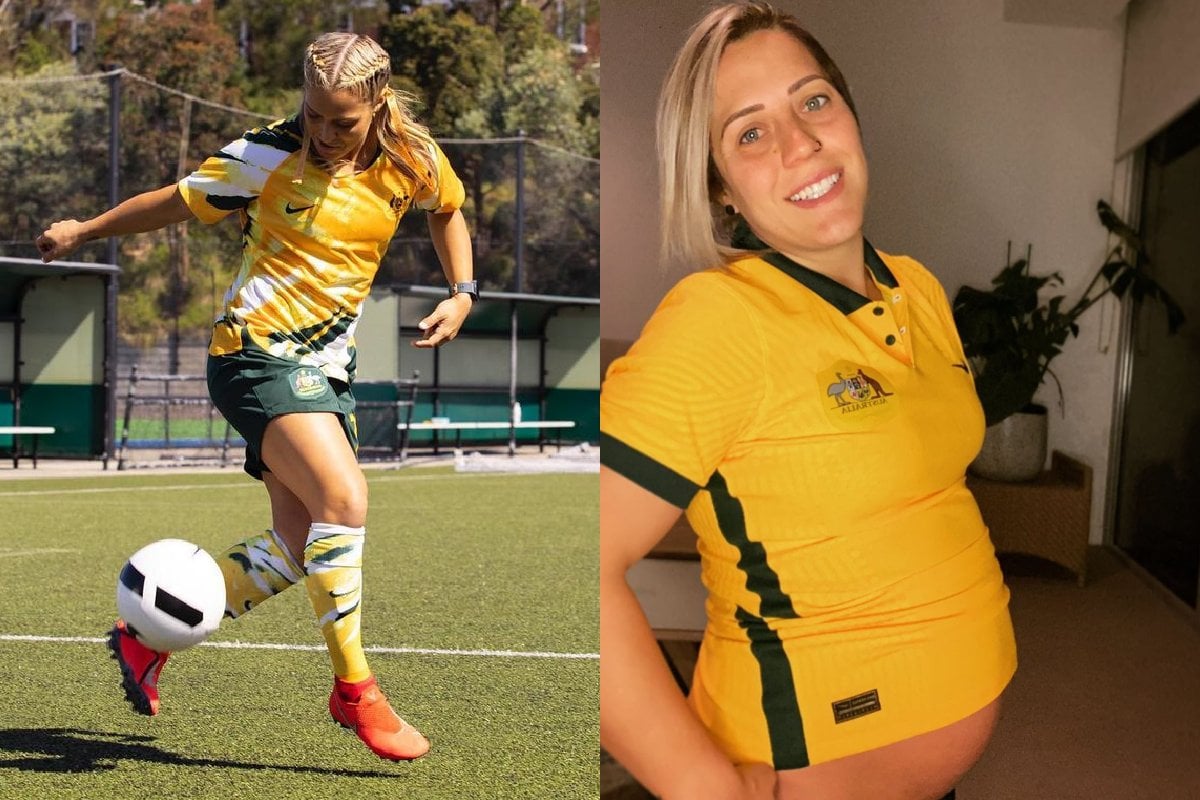 Coming from a large family, the Matildas and Brisbane Roar star knew becoming a mum was in her future, but as a professional athlete, she had to consider the timing.

As the Emamaco ambassador, 28, explained to Mamamia, football players work on a four-year cycle.

"Last year was obviously an Olympic year and 2021 was when I had always planned to fall pregnant, to get back for potentially the World Cup in 2023.

"So obviously with the Olympics getting pushed back, it threw a spanner in the works," she said.

The change in timings forced Katrina to consider where her priorities lay.

"I kind of sat there and thought about all my options," she said. "I knew at that point in time, I was ready to start a family.

"I [also] knew that if I was trying to go for the Olympic Games, then maybe I wouldn't be 100 per cent in it. So I decided I would let the universe decide for me."

When she signed with Norwegian football club Avaldsnes IL in early 2020, she chose to undergo IVF there - and there were a few reasons she felt comfortable doing so.

"I always wanted to do it over in Europe. The donor pool is much bigger over there," she explained.

"In Norway, you tell them the main characteristics you want and they go out and choose your data for you and you never really find out [who the father is]," she said.

Contrary to what you might expect, she preferred this approach to knowing more details about her sperm donor.

"At the end of the day, it's my baby and it's the way I bring her up. You don't go out and find partners and pick the pieces - what you want and don't want - by their looks and how good they are at things."

She went through five days of injections followed by a 36-hour trigger shot before they collected her eggs.

"I was actually injured over in Norway at the time, so it all worked out pretty perfectly... I was able to go to my appointments pretty freely," she said.

Half an hour before catching a flight home to Brisbane, Katrina had her egg transferred.

"That was pretty crazy. It didn't really feel real," she said. "And then when I touched down in Brisbane, I had to quarantine for 14 days."

Hoping she was pregnant, Katrina took a test early.

"It was very long for me to be in quarantine just wondering and thinking about all the things that were happening in my body and if I was feeling pregnant," she said. "I was questioning everything."

"My first test came back negative. Then I took one the next day, it was negative again, and I left it on the counter and came back about an hour later. I could see a really, really faint line."

Three days later, Katrina took the test again and the line got stronger.

"I was sitting in quarantine and I was an absolute mess," she told Mamamia.

"It was hard not being able to celebrate with everyone because I still had quite a bit of time to go in there," she said.

"[But] it was nice just to sit there and kind of relax and be excited in the moment as well. Because as soon as I got out, it was all pretty full on from there."

As someone who's used to intensive training, watching her body evolve during pregnancy has been eye-opening for the mum-to-be, she shared.

"I think being an athlete, it's always hard to see your body change so quickly. But I've really enjoyed feeling my baby grow with me... It's hard to stop all the training, but it's been really enjoyable," she said.

In the past, Katrina has openly spoken about her eating disorder and having an unhealthy relationship with food.

She's found that pregnancy has given her a newfound appreciation for what her body is capable of.

"It's massively [changed my perspective]," she said. "For a while there, I put [my body] through hell. And for it to give me life like this, I think it's something pretty incredible. It's really made me really change the way I think about food and the way I look at my body."

"I've never really loved it this much," she added.

Now, with just over a month of her pregnancy to go (Katrina's due on August 10), she's excited to meet her daughter and hopefully return to football a couple of months afterwards.

"In the last couple of months, I've really noticed how much I've missed football," she said.

"Being [a] professional athlete for so long, your body burns out and your mind burns out. For me to get to this point, I have the determination to get back and hopefully get into that World Cup 2023 squad."