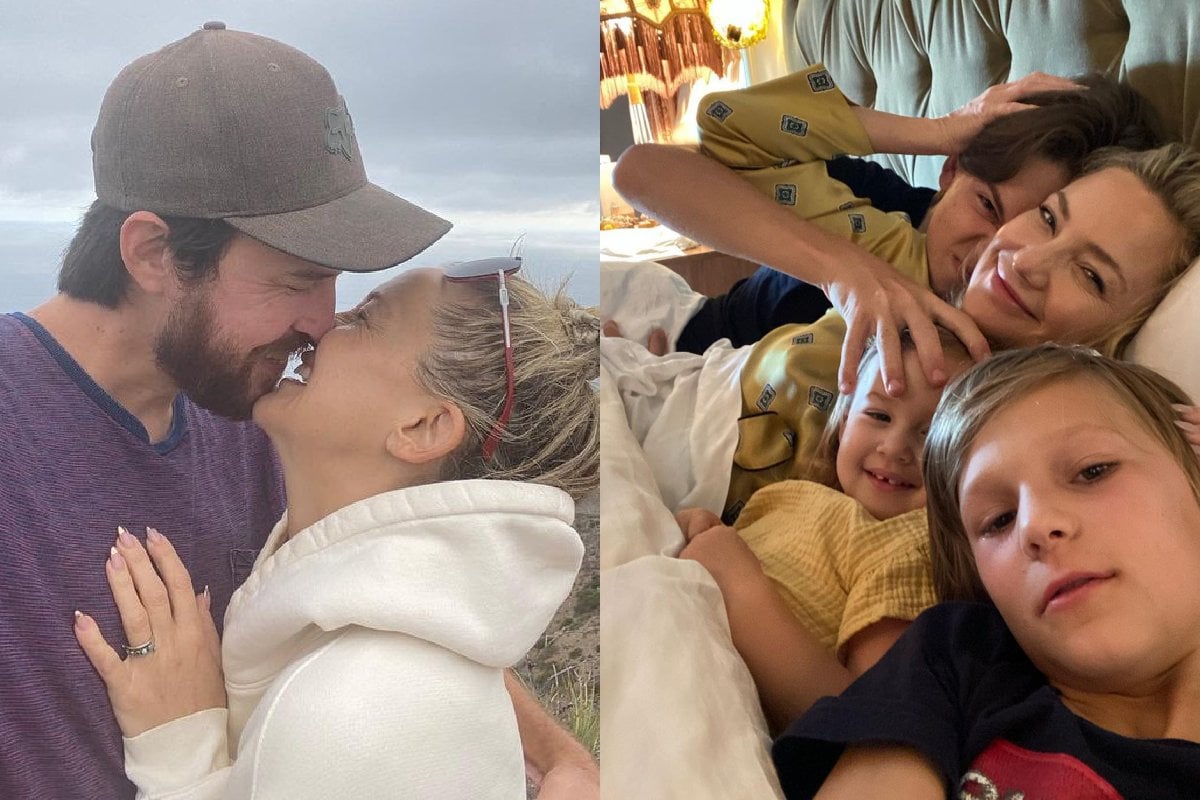 When it comes to family relationships, Kate Hudson has a more complicated one than most.

"I’ve got multiple dads, I’ve got kids all over the place," the actress and businesswoman told Sunday Today with Willie Geist earlier this year.

“The only expectations I really have that are really high in my life is with my kids," she said. "And with like family stuff. Other than that, it's like, I just let it go. I work my ass off and then I walk away and I hope for the best.”

The 42-year-old also opened up about how she and her brother Oliver Hudson are estranged from their biological father, musician Bill Hudson, and were raised by their mother Goldie Hawn and her partner, Kurt Russell.

"It’s a 41-year-old issue," Hudson, who rarely speaks about her father, said."I have a great family. I have a beautiful mother. I have a stepfather who stepped in and played a huge, huge part in sharing what it is to have a dependable father figure in our life. But it doesn't take away from the fact that we didn't know our dad."

The actress went on to say that "estrangement is unfortunately quite common".

"I think it's important for people to talk about that. Sometimes [we] need a little bit of talk and humour to move us into places where we can heal some of the wounds," she added.

Hudson has previously spoken about her estranged father and her relationship with her other siblings on her podcast Sibling Revelry, which she co-hosts with her brother Oliver.

"We've been talking so much about sibling relationships and distraught relationships or good relations — and we're sitting here like we have the best family, we're so great and yet we don't ever acknowledge the fact that we have four other siblings."

After Bill Hudson and Hawn divorced, he had two kids - daughter Emily in 1982 and son Zachary in 1986 -with Laverne and Shirley's Cindy Williams. He also had a daughter Lalania in 2006.

Last year, the actress opened up about raising her own children and the struggles of homeschooling them amid the COVID-19 pandemic.

Speaking on The Ellen DeGeneres Show, Hudson shared she was finding it difficult to balance her children’s schooling with running her own four businesses.

“The schooling thing is a huge adjustment to the kids. It’s a juggling act and an adjustment. I’m doing more reading than I’ve ever done in my life.”

Hudson has three children from three different fathers. As she explained to DeGeneres, the three kids differ in age, making homeschooling a little more difficult, as each child has very different needs and abilities.

Hudson also shares her two-year-old daughter, Rani Rose Hudson Fujikawa, with musician Danny Fujikawa; who she just got engaged to after five years of dating.

In March 2019, Hudson opened up about her experience of co-parenting with her former partners, sharing that her situation is “quite amazing”.

Speaking on the podcast Divorce Sucks! with Laura Wasserthis, she explained that in her situation, the key to maintaining a healthy co-parenting relationship has come down to three points: communication, self-sufficiency and always putting the kids first.

“As much as I would say I don’t recommend it to most, my situation is quite amazing,” Hudson shared.

She elaborated: “When you get divorced, you’re still in a relationship.

Hudson said she’s learnt how to deal with divorce and relationship breakdowns where children are involved from her mother, who split from Hudson's father in 1982, and has been with Kurt Russell since 1983.

“I think the one thing that I learned from my mum is that no matter what you’re feeling… when I see my friends talking sh*t about their ex-spouses in front of their kids, I get so upset because they don’t recognise how much that affects their child and how resentful their child will become of them,” she explained, adding, “I never heard a bad word about my father.”

“Kids are not only incredibly intelligent, but eventually they can make their mind up themselves,” Hudson continued. “They will see with their own eyes whatever needs to be seen and they need to come to that on their own terms. It’s not our place to tell them how to feel about the other parents. I think that’s so important.”

However, Hudson acknowledged that the fact that she is financially comfortable on her own, and does not require any assistance from her partner or ex-partners, makes things much easier.

“I think it’s important for a woman – obviously, for me personally, I am self-sufficient,” she said. “I do not rely on my partners for any financial stability. I think that allowed me a little bit of freedom … [for it] to be a little bit easier for me to walk away from certain relationships and maintain a good relationship with my partners.”

The Almost Famous actress also discussed her two exes' solid, positive dynamic not only with her, but with each other.

Though she admits she knows it’s rather unusual.

“They all get along,” she said. “It’s funny and we laugh about it. I never thought my life would look like that, but it is what it is. All I care about is happy kids, and we all make that the priority.”

Surprised the boys tonight with their favorite band @twentyonepilots ???? Thank you guys and the whole TOP family for making it so special ???? We had a blast ????✨

“Matt and I vacation together,” she added of the 43-year-old Muse frontman. “To me, it’s like the better friends you can be, the better everything is.”

She says above all else, making sure the children have the same rules in each household makes co-parenting as close to seamless as possible, and avoids confusion.

“Matt and I, we have a great way of talking to each other about Bing and instilling the same rules in the house. We find that to be really important for Bing to feel that there’s, ‘No, you’re not going to get away with anything in each other’s house. Mummy and Daddy are on the same page.’”

“Chris and I, we’re good,” Hudson said of the 54-year-old former Black Crowes singer. “It’s kind of funny too: Ryder really can’t get away with anything.”

“I also see this great feeling, a warm feeling, in my kids when they hear us talking and laughing and a real connection,” she said. “We might not have been able to live together and sustain the distance, but at the end of the day, there’s real love there. When the kids feel that I think, to them, it makes them feel safe and good.”

This post was originally published in December 2019, and updated on 14 September 2021.