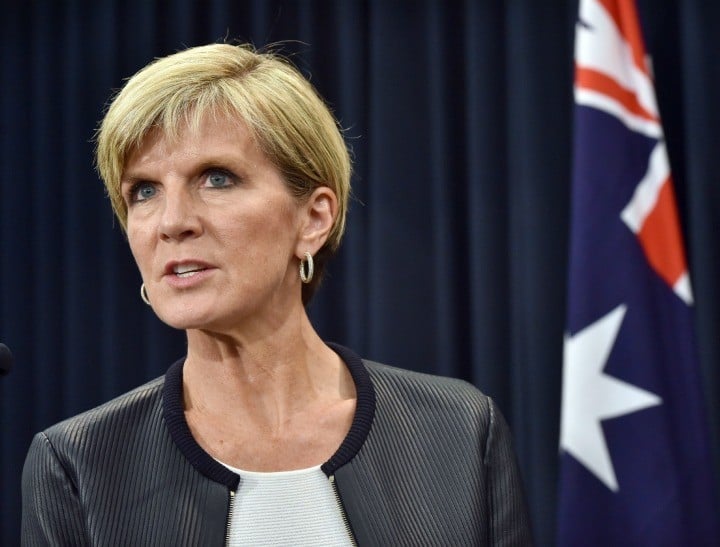 In her Mamamia column this week, Foreign Minister Julie Bishop writes about the radicalisation of vulnerable young Australian women.

Over the past six months there have been attacks on two police officers in Melbourne, the death of two innocent hostages in the Martin Place siege, and a thwarted but imminent terrorist plot for a random beheading in Sydney.

In December two young girls fled Sydney to become Jihadi brides in Syria and last week we learned of the extent of preparations for terror attacks on Australian soil – preparations of an 18-year-old from Melbourne whom we believe has killed himself in a suicide bombing in Iraq.

Vulnerable young Australians are being radicalised by violent extremist groups and are seeking to join Daesh (ISIL) and other terrorist groups in Syria and Iraq. While most of these foreign terrorist fighters were initially men, they are now being joined by increasing numbers of women and girls.

Women account for an estimated one fifth of all foreign fighters and supporters in the conflict. Over 500 women are from western countries. I estimate that 30 to 40 Australian women and girls are either engaging in or supporting terrorist activity in Syria/Iraq and at home.

There are a number of reasons for this deeply concerning development. One of the most pressing is Daesh’s exploitation of social media to radicalise and recruit online vulnerable young women.

Related: Girls are being raped by the Islamic State. Why aren’t we talking about it?

Daesh propaganda paints rosy but fabricated pictures of life in the conflict. Female extremists portray the so-called “caliphate” as a paradise for Muslims while using the lure of marriage to groom targets. They offer the false promise of a sense of belonging for those who might feel marginalised at home.

Australians thinking of joining Daesh need to know that the “caliphate” turns into the worst kind of prison for those who change their minds and want to leave.

It defies logic that young Australian women seek to join or support Daesh when we know how it views women. Daesh has published instructions for its followers on the treatment of sexual slaves which encourages raping and beating women. Even children are not immune, with Daesh supporting the sexual abuse of girls who have not yet reached puberty.

Related: The situation in Syria is now the worst humanitarian crisis since WWII.

Young women who have joined Daesh are being exploited in the most appalling way – forced into abusive marriages, used as sexual slaves, and manipulated for propaganda and recruitment purposes. In some cases, they end their lives as suicide bombers.

Related content: Islamic State is burying girls alive. So why aren’t we talking about it?

Some join an all-female militia known as the Al-Khansaa brigade which detains and punishes civilian women who do not follow Daesh’s medieval interpretation of Sharia law. In an unspeakable act of treachery to woman, the brigade reportedly operates brothels where non-Muslim Iraqi women and girls are held as sex slaves for Daesh terrorist fighters.

Efforts to prevent young people from travelling to Syria and Iraq are hampered by the fact that many have not previously been on the radar of our security and intelligence agencies. It is often family and friends, particularly female, who are the first to see changes in a person who is being radicalised. Family and friends should be aware that both men and boys, and women and girls, are at risk of falling prey to terrorist organisations.

The Government is committed to doing everything possible to stop young people travelling to the terrorist conflict. We are countering the propaganda that terrorist groups spread. We are cancelling passports of those seeking to travel and have made it an offence for Australians to travel to Daesh-controlled areas – al-Raqqah province in Syria and Mosul district in Iraq.

As sisters, wives, partners, friends and mothers, we can all play a role by denouncing or reporting extremism when we see it, including on social media. The website www.livingsafetogether.gov.au is worth viewing.

I urge Australian women to play a part in addressing the radicalisation of vulnerable young Australians, including women and girls, to help keep our people safe from terrorism.

I think as a community we can all play our part in making sure groups don't feel marginalised - #illridewithyou was a good start. The louder good people are the better! Part of the problem is the narrative of the media, and the unhelpful words of Tony in saying Muslim leaders aren't doing enough to portray Islam as a religion of peace. People can close down when they are scared but we can all rise above that with intelligence and empathy.

Bet you weren't offering to ride with any soldiers, who put their lives on the line to defend this country and the freedoms we all hold dear, when they were told not to go outside in the uniforms or risk being assaulted. The Muslims weren't the victim in the Martin place siege, however a Muslim was the perpetrator.