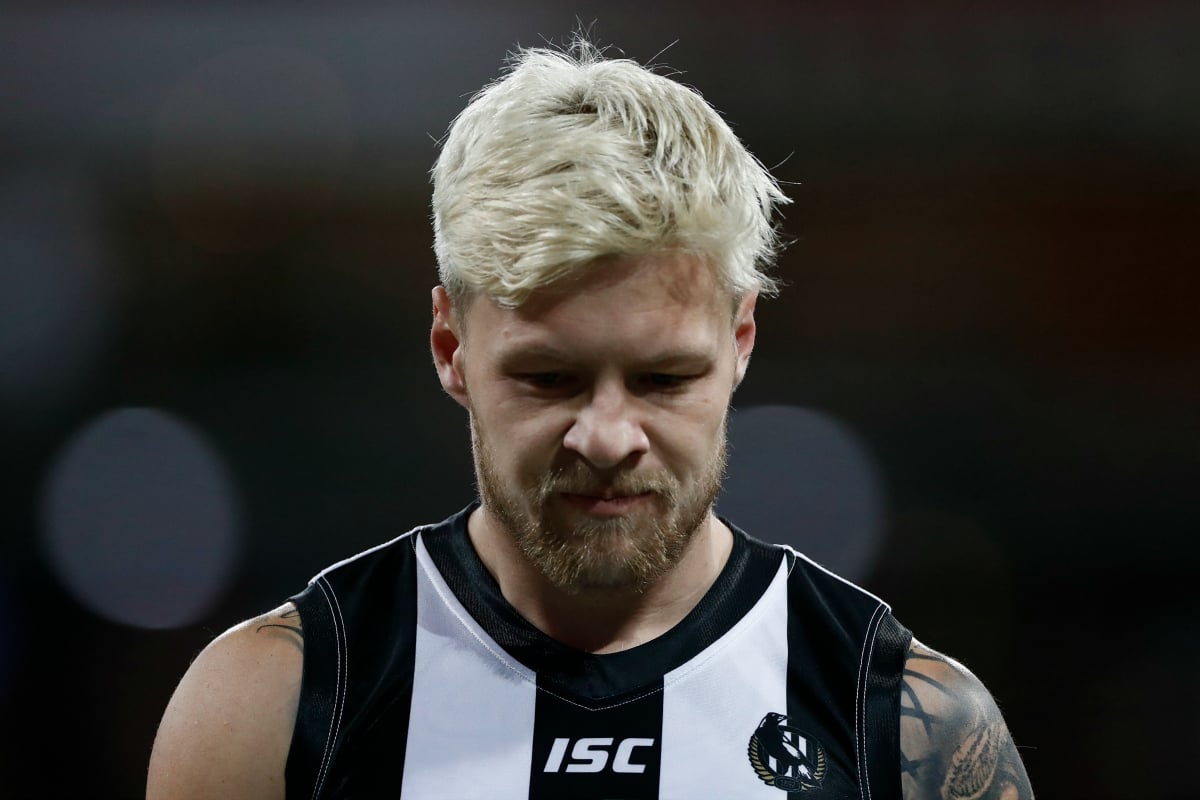 The following deals with allegations of sexual assault, which may be triggering for some readers.

The AFL has a famously loyal female fanbase.

Research out of Melbourne University found that its games attract the highest rate of female crowd attendance of any football code in the world. An average of 41 per cent over 20 years. That's more than the English Premier League, or the NFL, or NRL.

But lately, it seems, that loyalty is being tested over a critical issue.

That is the AFL's response to players facing allegations of violence against women. Or rather, it's lack of response.

The debate has been revived this month after Collingwood's Jordan De Goey continued to take the field despite being charged with indecent assault.

"These truly troubling issues are not going to go away": Caroline Wilson slams AFL's silence on Jordan De Goey's charges.

The 2015 incident was investigated by Victoria Police and the AFL Integrity unit in 2018, however, no charges were laid at the time. Yet when that changed on July 4, the AFL not only allowed De Goey to play on like nothing happened, it did so in silence.

And that's precisely where the growing discontent lies.

While other industries and sporting codes have finally begun to make meaningful, structural change to the way they handle allegations of physical and sexual violence against women, the AFL and several clubs seem to have sat on their hands.

Collingwood even tweeted "Welcome back Jordy" upon De Goey's return, and posted game footage in which commentator Bruce McAvaney described the charges against the star midfielder as "a hiccup".

After strong backlash from followers and viewers, the veteran broadcaster later apologised for minimising the situation.

In a searing op-ed, Chief Sports Writer for The Australian, Jessica Halloran, argued that it's AFL leadership, more than McAvaney, that deserve our outrage.

By allowing De Goey to play, she wrote, "they pretty much told the AFL community to be cool with sexual assault allegations. It then means a stale culture hasn’t shifted the slightest and it should be no shock to anyone when someone on TV ends up alluding to a sexual assault charge as a 'hiccup'."

"There are many senior women in the AFL community who have grave misgivings about this, and it is a terrible look," she said on Channel Nine panel show, Footy Classified earlier this month.

"In a profession such as coaching or teaching, he wouldn’t be working."

Others, including broadcasters Mick Warner and Tim Lane, echoed Wilson's call for clarity from the league—at the very least—about allowing him to play

"I would suggest, that the AFL have to really consider this, and try [to] draw some lines so that everyone understands where they stand," Lane told 3AW.

The frustration is clear, and the calls for procedural change are loud.﻿

One suggestion being floated by several columnists, sporting commentators and footy fans is a "no-fault" stand down policy, similar to that adopted by the NRL in early 2019. (A Change.org petition calling for an AFL version is circulating online.)

The rule sees players automatically suspended if they are charged with a criminal offence that carries a jail term of at least 11 years. On top of that, the league also has the discretion to stand down players accused of any charge of violence against women or children.

Presumption of innocence is a cornerstone of Australian legal system, of course. But a no-fault standdown policy doesn't make a judgement on the accused's guilt; it simply acknowledges the seriousness of the charges in the eyes of the law and the public.

"There needed to be an explanation."

It's worth noting that De Goey's charge wouldn't qualify him for automatic suspension if the 11-year threshold was applied. But the suggestion is not about him specifically; it's about the AFL taking a clear stance on the issue.

As NRL Commission Chair Peter Beattie said announcing his code's policy, "This is not about being popular, this is about sending a clear message the game does not tolerate violence, against women or children. Our job is to rebuild the reputation and protect the game."

Dragons star, Jack de Belin, wasn't as enthusiastic. He challenged the NRL policy in the Federal Court last May, after he was stood down over aggravated sexual assault charges.

His bid was unsuccessful, but had he won, Beattie said the consequences for the game would have been dire.

"I don't want to be melodramatic, but let me be frank, had we not got this no-fault rule in place and had it not stood the test of challenge, this game would've withered and died," Beattie told Fox Sports' League Life.

Beattie was referring to the fact that mothers are typically responsible for deciding which sport their child plays and, he argued, many wouldn't favour a code that appears to be weak on allegations of violence against women.

Could the AFL be at risk of the same fate? Could it end up alienating that loyal female fanbase and its many male allies?

If the code's leadership continues to sit on its hands on this issue, it seems almost inevitable.

Mamamia reached out to the AFL, but it was unable to comment by the time of publishing.