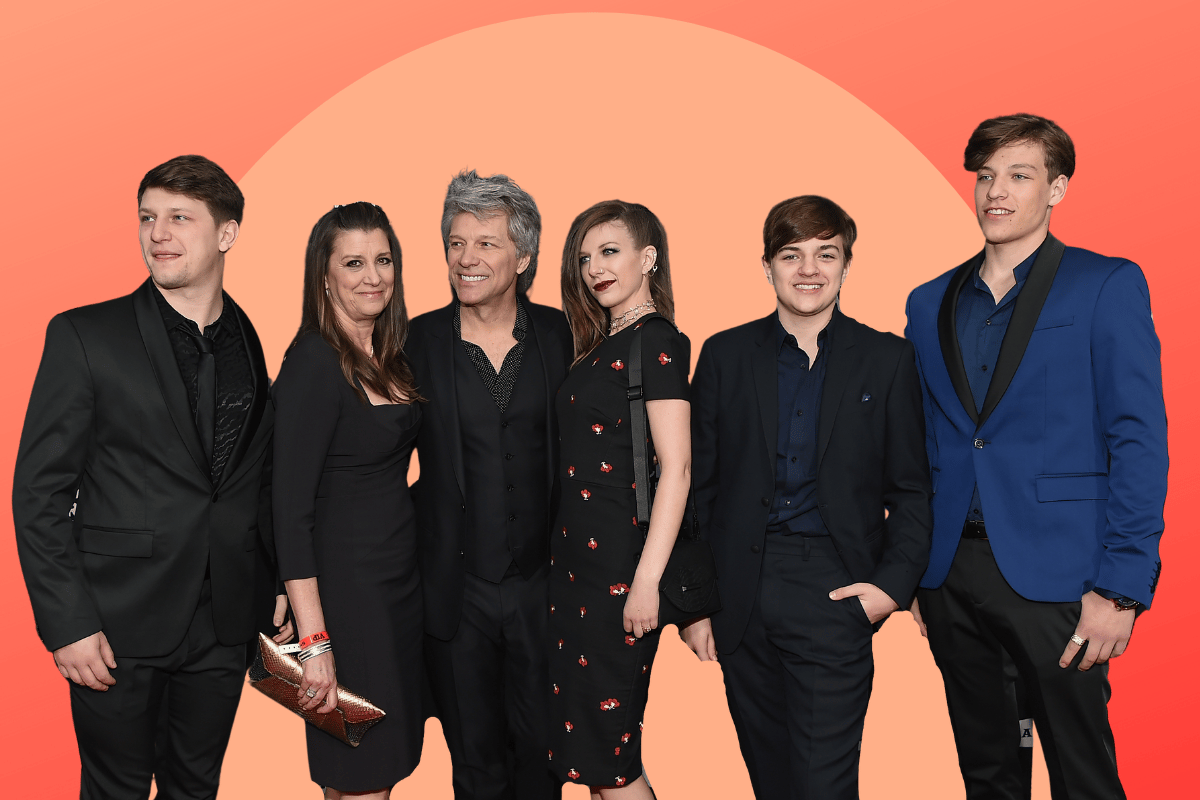 Jon Bon Jovi was a musical icon in the ‘80s and continues to be to this day thanks to classic hits such as It’s My Life, You Give Love a Bad Name, Bed Of Roses and Livin’ On A Prayer.

The legendary rock ‘n’ roll star is known for his incredible music and charismatic stage presence - but behind the scenes, he has always aimed to keep his family life grounded.

With the news that one of Bon Jovi’s sons is dating Stranger Things actress Millie Bobby Brown, we thought it perfect timing to unpack Bon Jovi’s three-decade long marriage with wife Dorothea and his relationship with his four kids.

Bon Jovi and Dorothea Hurley met in high school in New Jersey, with Bon Jovi apparently trying to cheat on a test by catching a peak at her work. So, love at first sight!

The pair didn’t start a relationship until they were in their 20s.

During a stop in LA on The New Jersey Syndicate Tour in 1989, Bon Jovi secretly travelled to Vegas to marry Dorothea. 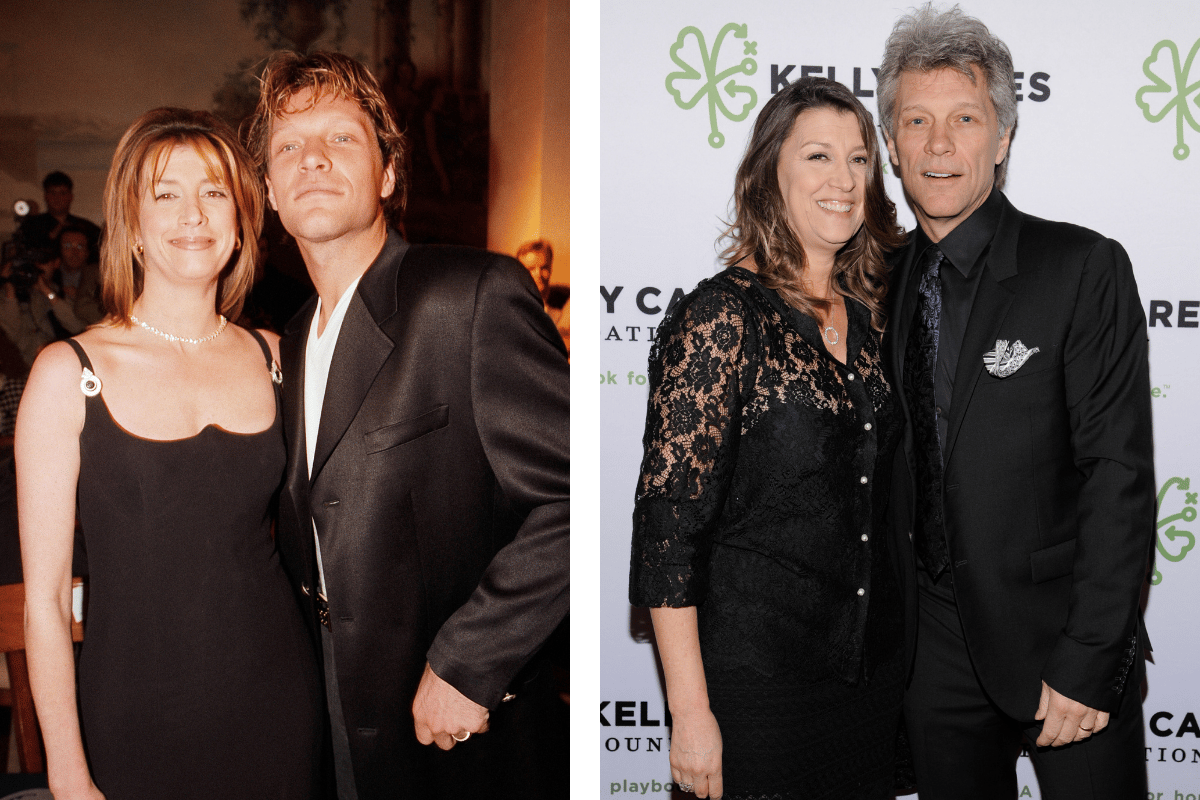 Image: Getty. The duo marked their 30th wedding anniversary in the last few years, putting their lasting marriage down to mutual respect.

“Having grown up together and grown together, we really like each other. We want to hang out,” Bon Jovi said to People in 2020.

In the same interview, Dorothea said: “I always said I was good at spotting potential too. I have a gift. We work hard at it, but we enjoy each other and we never fell for the trappings of what celebrity can do.”

Dorothea is a professional karate instructor and restaurateur.

The couple have been together for over 40 years and share four kids together.

Life at the moment looks to be good for the Bon Jovi family.

When Coronavirus was at its highest in the US, particularly New York, Bon Jovi and his wife decided to leave Manhattan for New Jersey. The couple and their four kids bunkered down together.

“I said, ‘we’ve got to get out of town. We've got to get all the kids back.’ For about a month, our whole family was intact,” Bon Jovi said to People.

“We spent more time in that house than we have in over a decade. Then the big kids finally said, ‘we’re out,’ and made a run for it,” he said. 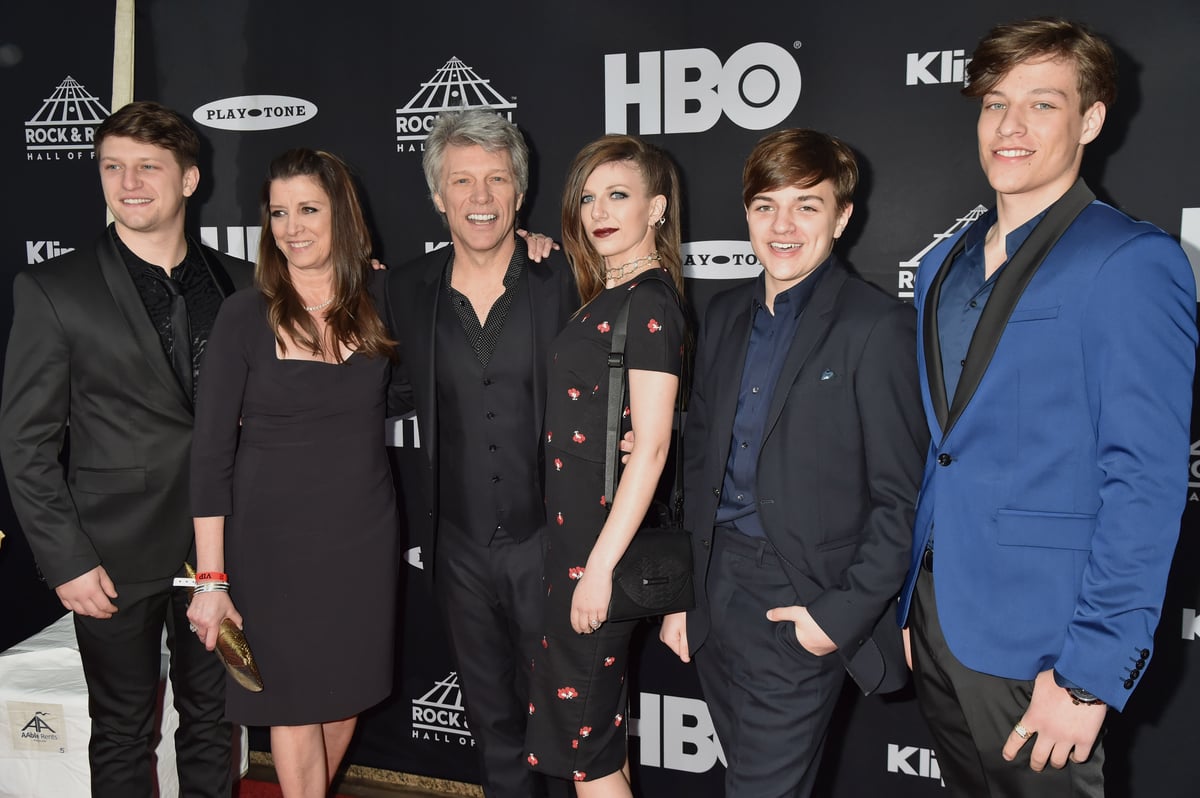 From left to right Jesse, Dorothea, Jon, Stephanie, Romeo, Jake. Image: Getty. Dorothea also spoke positively about their time reunited as a family saying, “our focus has always been family first and making sure that people are doing well.”

“We like each other. We spent a lot of time together, and it was more than we have spent in many years, but it was nice.”

Like his sister, Romeo is more of a private person, especially considering his age. He currently attends high school in Manhattan.

Bon Jovi and Dorothea expressed excitement for their youngest to graduate, revealing to People they are “definitely looking forward” to that empty nest life after raising four children. 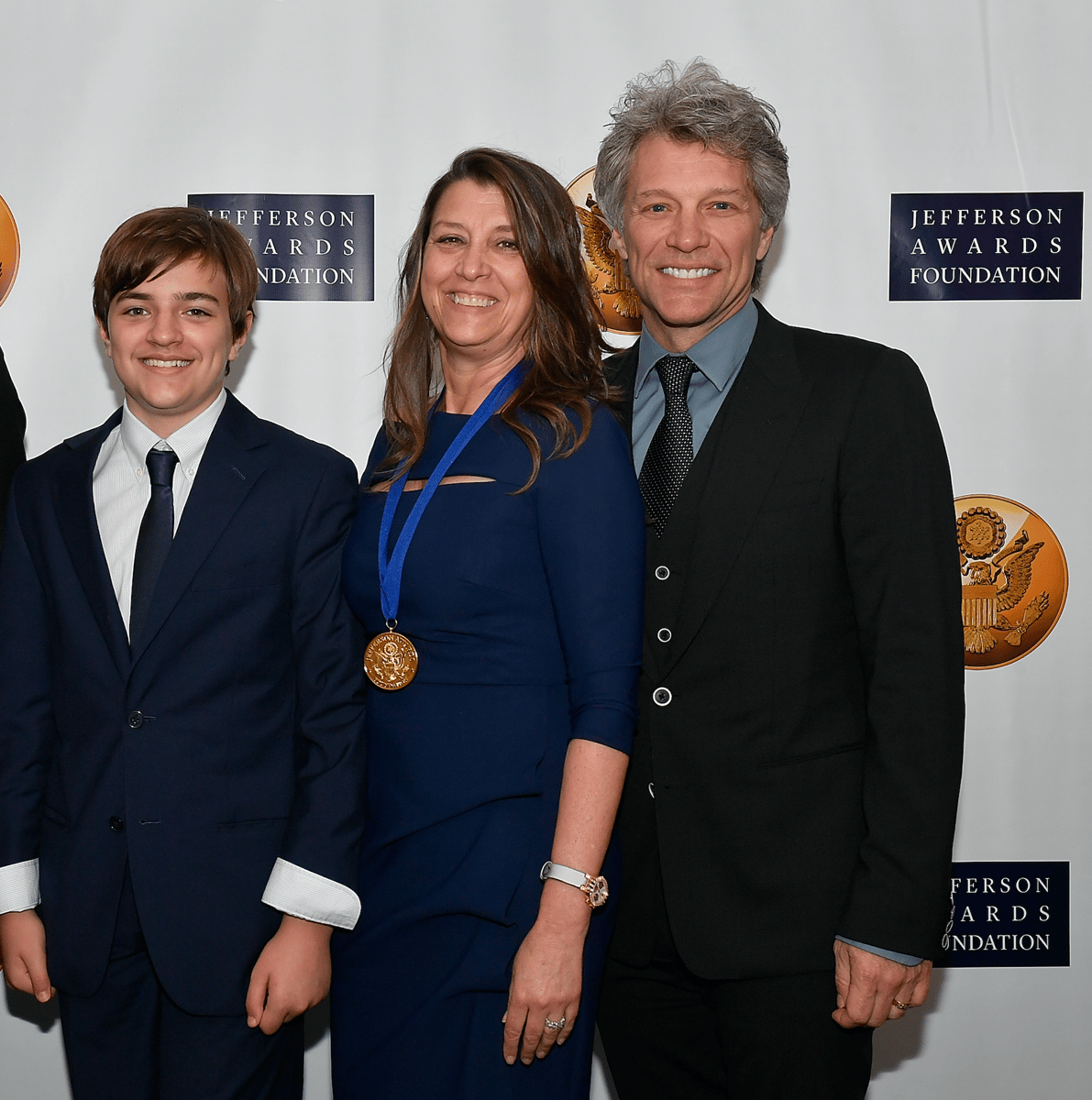 “I might finally get out of high school!” Dorothea said in the interview, adding: “just not being stuck to a schedule and being able to travel [will be nice], but we like to see our kids. It’s not like we’re going to disappear.”

According to Bon Jovi himself, his youngest isn’t so interested in his dad’s career, and even declined to attend his shows in the past!

Listen to the latest episode of Mamamia's entertainment podcast, The Spill: The real fury behind the Celeste Barber and Emily Ratajkowski controversy. Post continues after audio.

In 2018, Jake made headlines for helping organise his school’s rally on gun violence. The national student walkout was in reaction to the Marjory Stoneman Douglas mass shooting on February 14, 2018.

“It’s enough. It’s happened too many times that we watch it,” Jake said at the time to nj.com. “And we cannot let it go away this time.”

Jake is a student at Syracuse University in New York.

But what Jake is arguably most famous for currently is his newfound relationship with actress Millie Bobby Brown.

Jake has posted a few shots with his girlfriend Millie since June, but it was only this week that Millie confirmed the news on her socials.

The picture shows the pair kissing one another during a ride on the London Eye Ferris Wheel, with Millie splitting her time between the UK and US.

Jesse is Bon Jovi’s third eldest child. At the age of 26, Jesse has made quite the name for himself because of his start-up business.

Jesse runs Hampton Water Wine Co., which is a rosé wine brand that he co-founded with Bon Jovi in 2017. They decided to start the business after Jesse graduated from university.

The brand was even named within the Wine Spectator’s Top 100 Wines in 2018.

In an interview last year with Thrive Global in April, Jesse said: “We wanted Hampton Water to challenge the norms of the rosé market and shift perceptions that rosé was consumed by females, in warm weather months.”

“Our goal was to establish Hampton Water as the go-to year-round rose; a brand that challenged ‘traditional’ gender roles through our ‘Pink Bottle Boys’ brand extension. Real men drink pink!”

Prior to finding success as an entrepreneur, Jesse played college football for Notre Dame University.

“Sports were always a huge part of my life,” Jesse said to Sports Keeda in 2019.

“I played lacrosse and football since I was really young. I’ve always been an incredibly competitive person and sports were also where I got that out.”

Stephanie is Bon Jovi’s only daughter and his eldest child.

She works as a camera operator for TV. Although she works in the entertainment industry, Stephanie has chosen to live a relatively private life.

In 2012 at the age of 19, Stephanie was found unresponsive at her university due to a heroin overdose. She was then taken to a local hospital and, thankfully, recovered from the overdose. 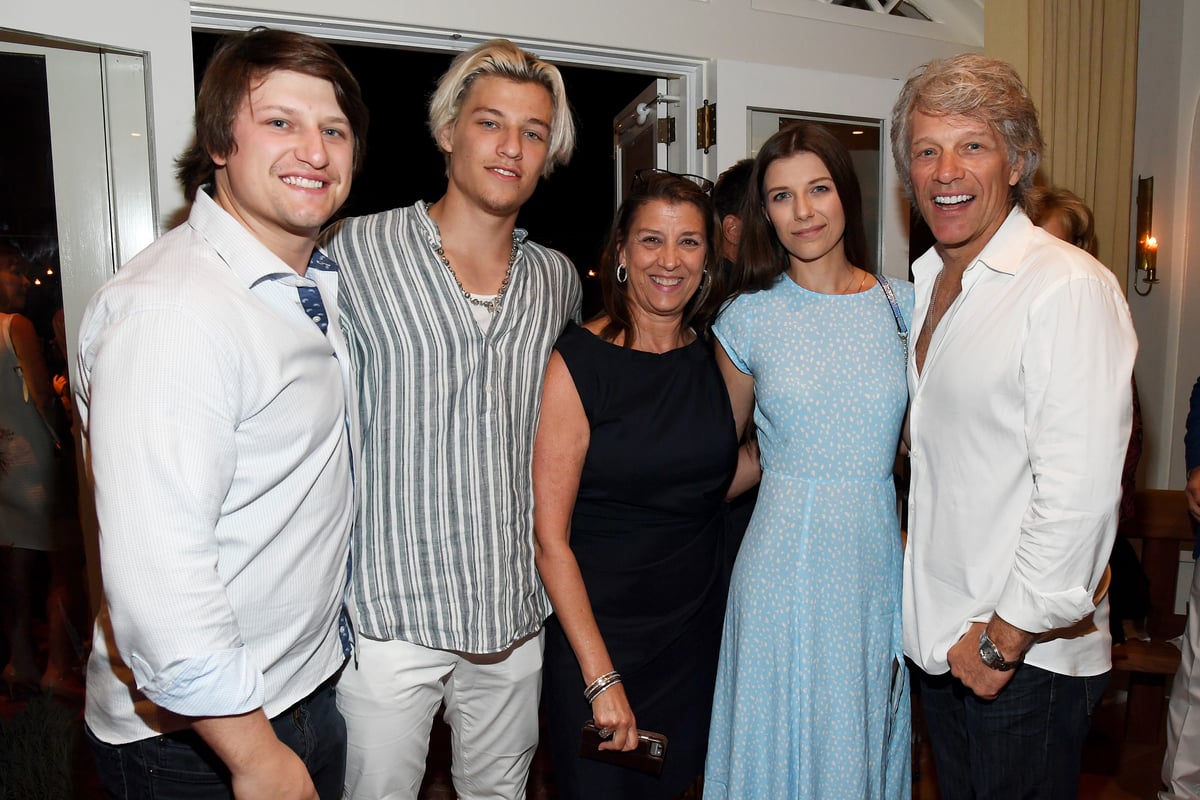 Stephanie second from the right. Image: Getty. She was also arrested for being found in possession of heroin, marijuana and drug paraphernalia.

However, the charges were later dropped via New York’s Good Samaritan law, which encourages reporting of overdoses to prevent deaths. 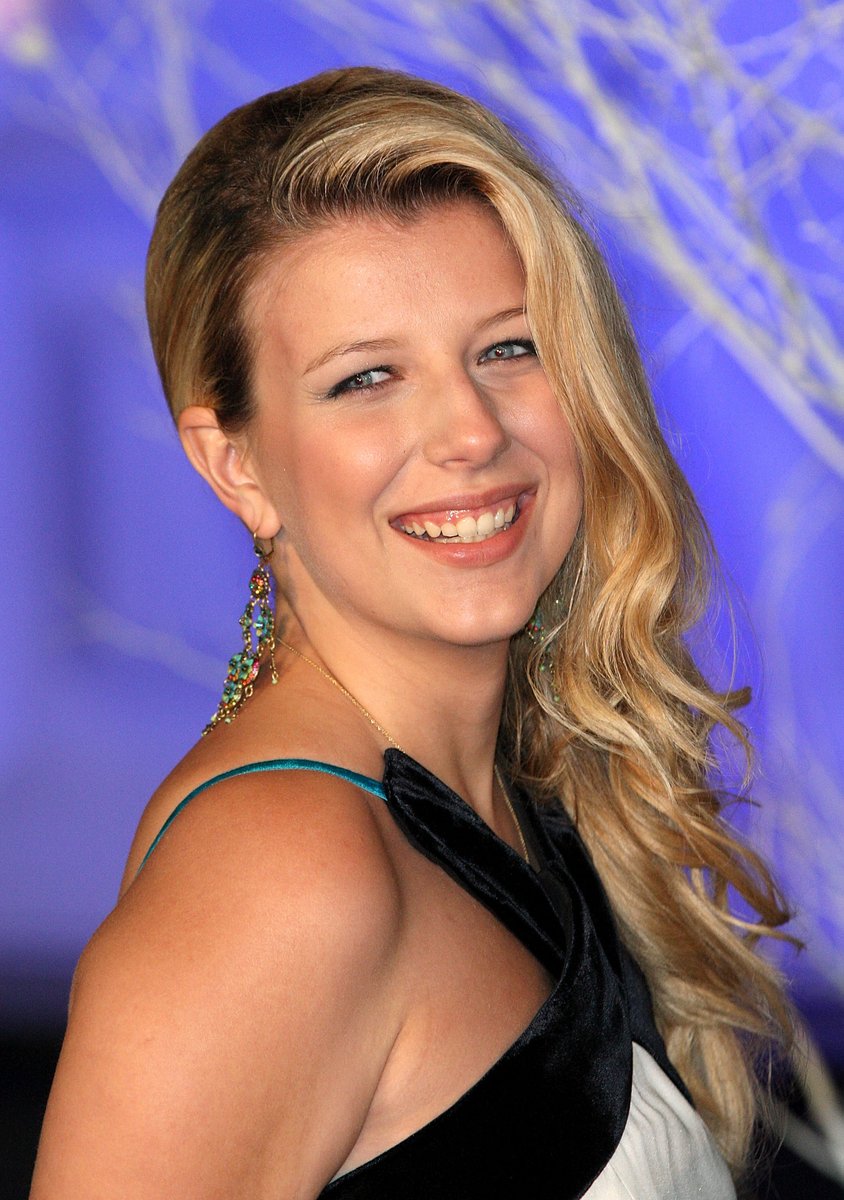 “It was a terrible speed bump that we got over. It happens to a lot of families that you would never know... We dealt with it as a family,” Dorothea and Bon Jovi said to People in 2016.