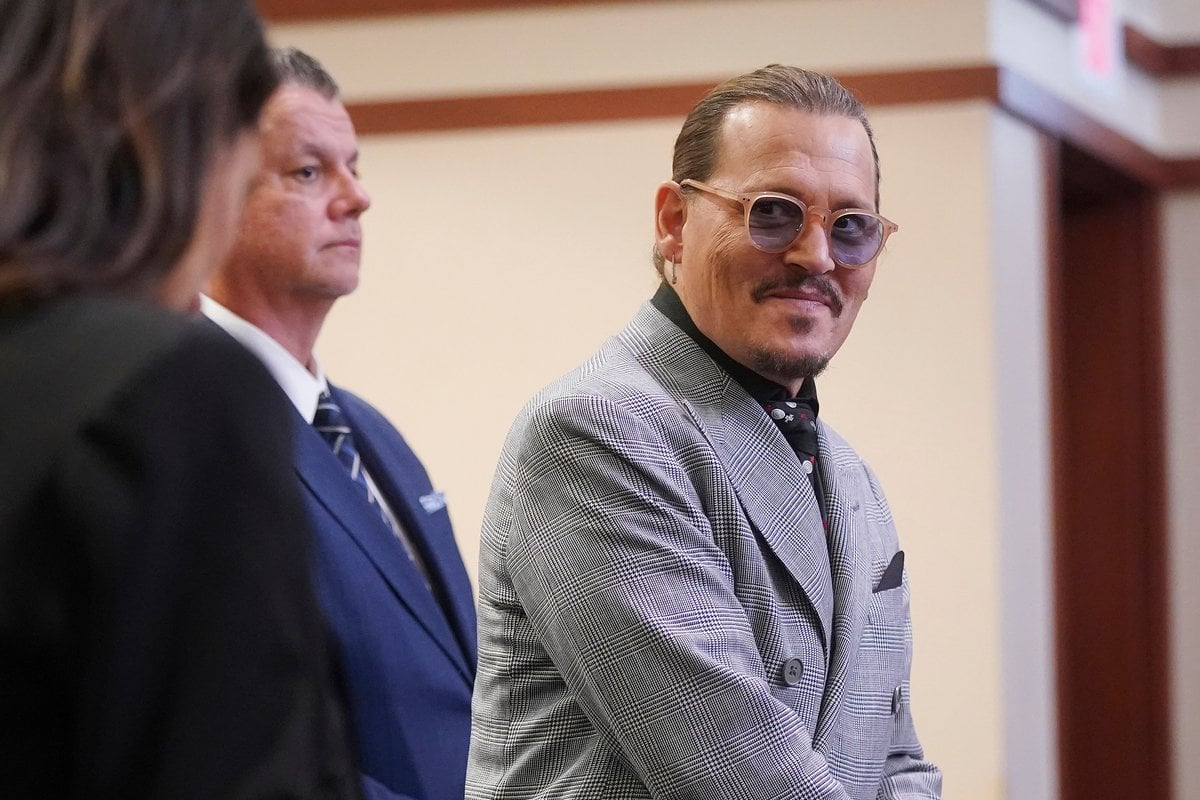 The court may still be in session for the defamation trial between actors Johnny Depp and Amber Heard, but in the court of public opinion, a winner has long since been crowned.

For those of you who have been living in the jungles of some remote island where there is no internet or social media, here is the 411 about the case: Depp is suing Heard for $50 million, alleging she defamed him when she claimed she was a victim of domestic abuse in an op-ed she wrote for The Washington Post in December 2018.

Heard has counter-sued for $100 million, alleging that Depp smeared her by calling her a liar.

While most of these cases play out behind closed doors, with details being drip-fed to media, this trial is being live-streamed for every Tom, Dick, Harry, and voyeur out there.

Headlines and stories about the case have not only taken up space in newspapers and websites, it has ballooned on social media. On TikTok alone, the Justice for Johnny Depp hashtag has three billion views. Three BILLION.

On Instagram, the hashtag has almost 350K compared to the Justice for Amber Heard hashtag's paltry 9K. When I checked on Twitter, there were 440 tweets in the past hour supporting Depp - Heard didn't even register. If you look for support for Depp on Facebook, hundreds of pages show up. If you do the same for Heard, you'll find about five.

Add to the fact that there are over four million signatures in a petition to remove Heard from the second Aquaman film (which appears to have worked to some degree, with the actor revealing in her testimony that her screen time had been reduced significantly from the original script), then it is pretty easy to see that Depp is winning the popularity contest.

A lot of this is, of course, due to the longevity of Depp's career versus Heard's. He's been acting since the 1980s and has 99 acting credits to his name, including roles that are beloved by an audience of all ages.

On the other hand, Heard has been acting since 2004 and has 51 acting credits. In her resume, you won't find iconic characters like Jack Sparrow, Gilbert Grape, Donnie Brasco, or Edward Scissorhands.

Basically, Depp has mainstream appeal, and his fame far outweighs hers. The savvy team behind him made sure to capitalise on the public's fondness for his films, and by extension, for the man himself.

It's why Heard fired her own PR team days out from taking the stand. A source told the New York Post that Heard was "frustrated with her story not being told effectively".

This was especially true while Depp was providing testimony. Much of the public took his word as gospel because the tabloid media reporting on the case did not make it obvious that Heard had yet to give her own side of the story. This meant that when Depp claimed Heard pooped in their bed or cut off the tip of his finger, it was taken as fact rather than testimony.

And who could blame people? It's not every day that we get to sit in on legal proceedings.

Listen to The Spill: The Uncomfortable Reason Amber Heard's Testimony Is Hard To Hear. Post continues after audio.

Yet beneath the layers of PR spin, there has also been a layer of fake news. Do you remember when Russia was obsessed with America, instead of Ukraine? That was back in 2016, when Donald Trump and Hillary Clinton were campaigning for US president. A 2018 report showed that Russia meddled big time in the election, trying (and succeeding) to sway the outcome in favour of Trump. The strategy was to spread fake news about Clinton - hence PizzaGate - to ensure Trump came out looking like the knight in shining armour.

Similarly, media nonprofit the Citizens has recently revealed through VICE that conservative outlet The Daily Wire has spent "tens of thousands of dollars promoting misleading news" on social media about the Depp/Heard trial.

The Daily Wire was founded in 2015 by former editor of Breitbart News Ben Shapiro and film director Jeremy Boreing. It is the second most popular news publisher on Facebook. Last year, NPR ran a story titled "Outrage As A Business Model: How Ben Shapiro Is Using Facebook To Build An Empire" to discuss the extremely high engagement on The Daily Wire's Facebook page. NPR found that stories published by the conservative outlet received more "likes, shares and comments on Facebook than any other news publisher by a wide margin".

According to VICE, the outlet has spent between $35K and $47K on both Facebook and Instagram ads that promote negative articles about Heard and/or positive articles about Depp. Analysis by the Citizens on Facebook advertising showed that The Daily Wire sought to capitalise on the trial by pulling in readers while pushing its conservative agenda.

One of the ads it has been running promotes an article titled "The Attempted Character Assassination of Johnny Depp". It purports that the only bad press ever written about Depp came from film critics and that it was only until Heard came into his life that the bad press escalated. The article discusses the libel case that Depp lost to UK's The Sun newspaper (after the paper called Depp a "wife beater"), falsely stating that Depp "was able to disprove 12 of Heard's 14 allegations" and that the judge branded him "a monster".

However, the judge on the libel case said it was "more likely than not that 12 out of the 14 instances of abuse alleged had occurred." He also called Depp a monster because Depp himself had said he had a "monster side to his personality." The judge was merely quoting him.

When VICE contacted The Daily Wire for comment, an editor's note was added to the article "The Attempted Character Assassination of Johnny Depp", saying that a previous version of the article incorrectly stated Depp was able to disprove 12 of the 14 allegations.

Conservative political commentator Candace Owens, who has more than five million followers on Facebook, promoted the ad on her page. She captioned the sponsored post with: "I hope Johnny Depp bankrupts Amber Heard with his lawsuit. It has been absolutely ridiculous to see what that woman has been allowed to do because she flew under the radar of the MeToo movement. Amber Heard is the perfect example of what I refer to as 'toxic femininity'." 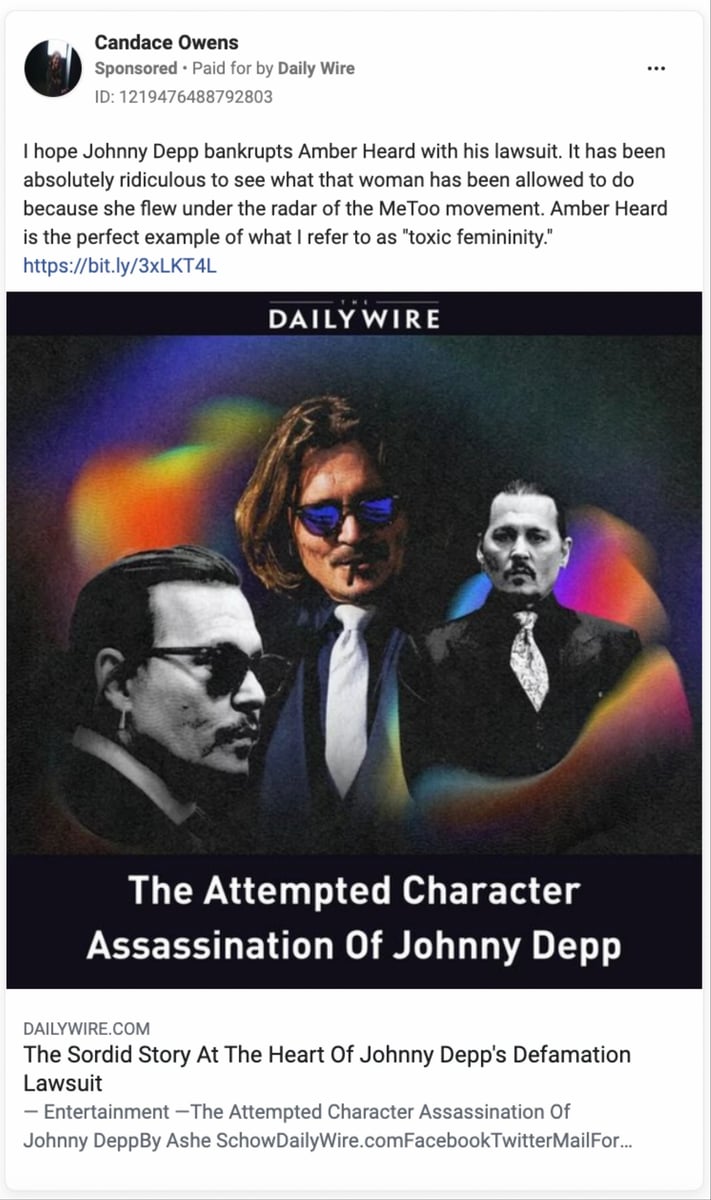 In another ad, The Daily Wire spent between $10,700 and $15,799 promoting an article titled "The 14 Most Shocking Revelations In The Johnny Depp, Amber Heard Defamation Trial", which was again published on Owens' page. The article repeats Depp's claims of abuse, with 11 of the 14 points listed in favour of Depp.

A number of videos featuring Owens and another conservative commentator, Michael Knowles, has also been promoted by The Daily Wire on Facebook. In these videos, the commentators attack Heard's character and paint Depp as the victim, saying there is absolutely no evidence that Depp abused Heard, despite him losing the UK libel case, and the testimonies and witness statements currently being heard in court.

"Amber Heard is at fault. This man lost his entire career based on allegations absent of a shred of evidence. It is everything that I say is wrong with the MeToo movement. It is emblematic of the idea that women should just magically be believed," Owens said in one video.

Knowles called Heard "a complete lunatic" in one of his videos and also blames Depp for not "taking control of his household."

"Where are the strong men?" He asked. 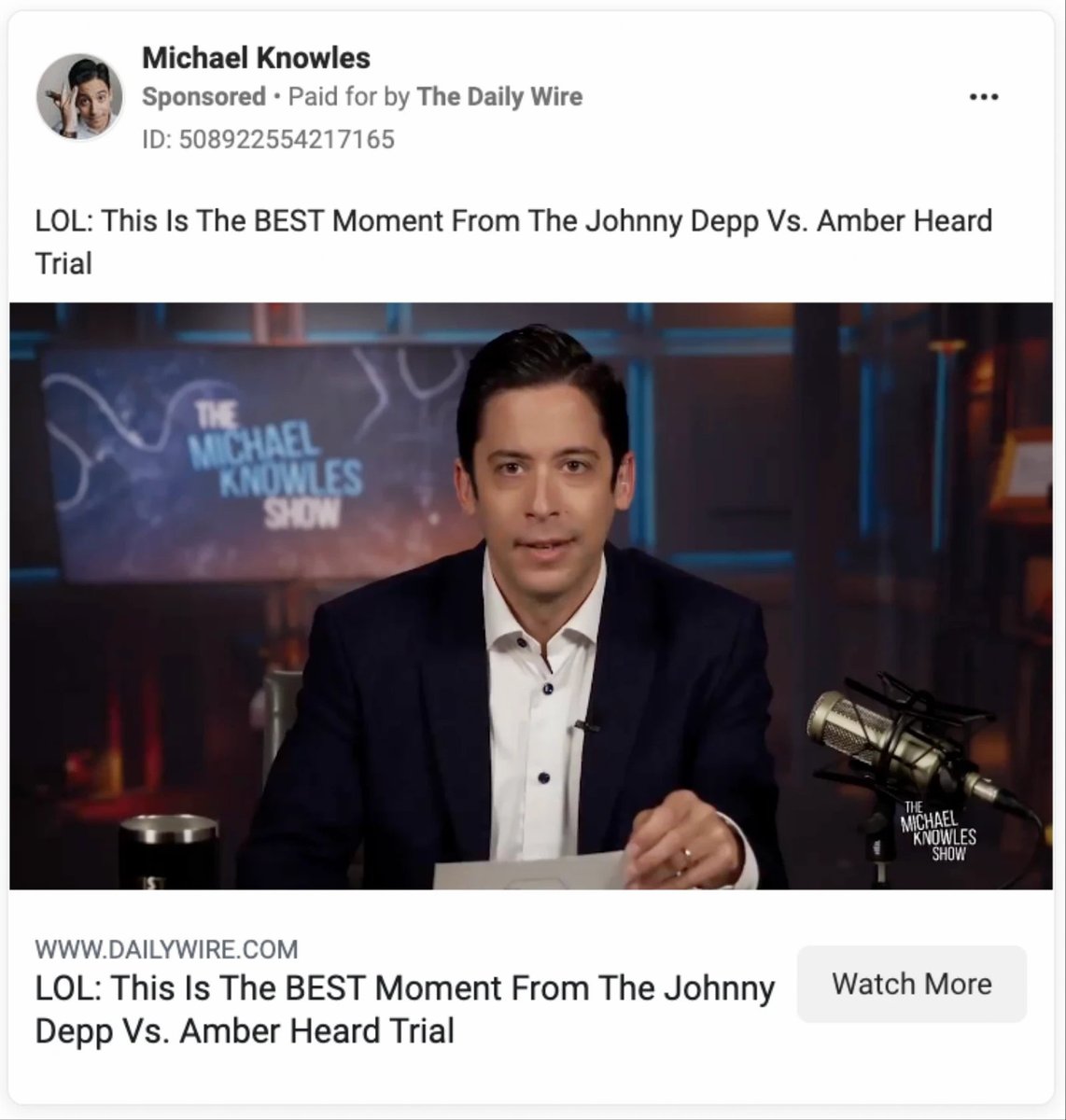 Of course, it can be argued that part of the blame lies with the giant organisation that is Facebook. There have been numerous calls for the social media platform to better regulate its content, especially fake news and articles/advertisements that spread hate and disharmony. Until the "internet" is regulated, well, it's a lawless place.

"The louder and more obnoxious and more conspiratorial content is, the more engagement it's going to get," Matt Rivitz, co-founder of social media activism campaign group Sleeping Giants told VICE. He noted that Facebook’s business model was "tearing us apart as a society."

"[The Daily Wire] is a very successful conduit of material from the far extremes and mainstreaming it into the conservative circles. The ultimate outcome of this is the demonisation of women. Women face a completely different online milieu and offline milieu than men do," Heidi Beirich, co-founder of the Global Project Against Hate and Extremism said to VICE.

Indeed, misogyny and a dislike of the MeToo movement may play a big part in why Depp is believed over Heard.

I don't expect you to change your mind after reading this. I don't think anything will change people's current perceptions. Some things are just too big for that.

But I hope some part of you thinks there is something quietly distasteful about the TikTok memes mocking Heard while she talks about being sexually assaulted with a bottle or slapped so hard across the face she fell off the couch. I mean, even if you side with Depp, no one knows FOR SURE what happened between the pair, besides themselves. So surely, some element of decency should prevail, right?

Because at the heart of this case, beyond the glitter of Hollywood and paparazzi and press, beyond the fans and social media, is domestic violence. That insidious destroyer of lives.

Years from now, we might look back on this time and go, "What the hell were we thinking?" We have done just that with the likes of Monica Lewinsky, Brittany Spears, and, closer to home, Lindy Chamberlain.

Will we do that with Amber Heard? Time will tell.

Reply
Upvote
Johnny Depp insisting on a live streamed trial reminds me of Woody Allen calling a press conference to announce that police had exonerated him of child abuse (they definitely had not). If you say something loudly enough and have a powerful media team who can prevent other people getting press time, facts become completely irrelevant.

Totally agree about the MeToo backlash, you can sense it in the irrational rage around this case. There are a group of both men and women who have been waiting for the first chance to claim everything has gone "too far" & Johnny strategically crafted it for them.
L
lavender 3 months ago