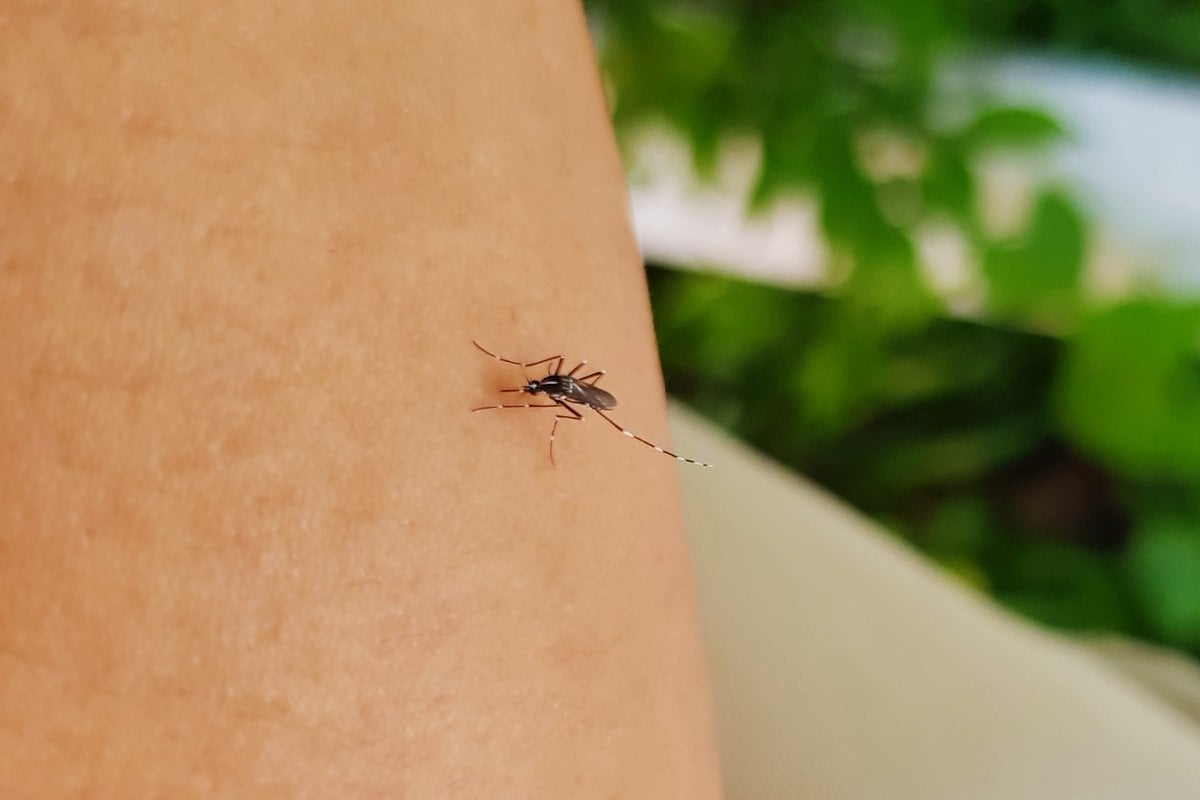 Just when we thought we've heard enough about viruses, a new one has been cropping up in the news.

The Japanese encephalitis virus has been spreading across our country's east coast, being passed to humans via mosquito bites.

As of March 14, there are currently 18 confirmed cases of the virus here in Australia, including seven in Victoria, six in New South Wales, four in South Australia and one in Queensland.

But where did this mosquito-borne virus come from? And how concerned should we actually be?

To find out, Mamamia's news podcast The Quicky, spoke to two experts in infectious diseases about what we need to know about Japanese encephalitis.

Here's what they told us.

Where did Japanese encephalitis come from?

Before we get into where the Japanese encephalitis virus came from, lets go over what it actually is.

"This is a virus that's different to SARS," Professor Jason Mackenzie, International expert on flavivirus and norovirus replication and pathogenesis at the Peter Doherty Institute for Infection and Immunity told The Quicky.

"This is a virus that's more related to Dengue virus, which many people in Australia have heard about. And also Zika, which sort of hit the headlines around 2015, 2016. So it's one of these viruses that is transmitted by mosquitoes."

"It's a virus that is very harmful, because the virus can obviously infect the body. When it gets into the brain, which is one of the unfortunate consequences of infection, it can cause a lot of harm."

So far two people have died from the virus in Australia, a Victorian man aged in his 60s and New South Wales man in his 70s. But the virus is rarely fatal.

Japanese encephalitis was first documented in Japan in 1871, hence its name.

Fast forward one hundred years and the virus was being reported in Australia in the 1990s. It's only usually found in parts of far northern Australia but now it's started spreading south as far as Victoria and South Australia.

There's a theory that it came into Australia either from mosquitoes pushed across from one of our southeast Asian neighbours, or from a waterbird who had it and then migrated to our shores.

Why is the virus spreading?

Health authorities recently discovered the Japanese encephalitis virus, which can infect animals as well as humans, has been spreading in piggeries down the east coast of Australia.

It has now been found circulating in more than 40 pig farms across Queensland, New South Wales and Victoria, with staff who work closely with the animals given a vaccine for protection.

So why is it spreading so far south this year? Well, Professor Mackenzie says there's a whole bunch of factors, including increased rainfall and flooding.

"[You're] getting increase water pooling and you're getting a lot more mosquitoes coming down."

"We have noticed a lot of migration of water birds coming down as well. So I think it's just one of those rare times when all of those factors come together. Unfortunately, the incursion was around where there are a lot of pig farms and we do know that pigs are the amplifying host. So that's really driven a lot of the high levels of the virus within the area."

Listen to The Quicky's full explainer on Japanese encephalitis. Post continues below.

What are the symptoms to look out for?

Not everyone who gets infected with the Japanese encephalitis virus will have symptoms. In fact, according to NSW Health, less than one percent of people infected will experience symptoms.

The health department says some people who get infected may experience an illness with fever and headache, while people with severe infection may experience neck stiffness, disorientation, tremors, a coma or seizures.

Dr Michelle Giles, Professor and clinical appointments at Alfred Health, Monash Health and the Royal Women’s Hospital, and an Infectious Diseases Physician, told The Quicky the "worst case scenario is the encephalitis".

"It's an infection in the brain, and it can lead to death [and] we have unfortunately had deaths already."

"The other thing that can happen is if you survive, because there is no specific treatment for the encephalitis or for this viral infection, if you survive, you can be left with long term neurological disability. And that can occur in between 30 to  50 percent of survivors who have the encephalitis. But by far and away, the vast majority of people infected with this virus have no symptoms or only mild symptoms."

Are we looking at another pandemic?

While talk of another virus going around may sound concerning, Professor Mackenzie says it doesn't look like we're facing a pandemic like we are with COVID-19.

"It's more of a virus that can be contained rather than a respiratory or aerosol, which can be spread wide further into our community. So I can't see this one as being a pandemic, little small epidemic outbursts, that we've seen for sure, but not a pandemic."

He also says people in infected areas are taking up precautionary methods, such as fogging around pig farms.

"In the last resort, you could actually cull a lot of the pigs, which they do in Southeast Asia and it does limit the spread."

Professor Mackenzie also suspects we won't see a lot of infections over winter as mosquitoes aren't as active in colder months.

"We know a lot of mozzies lay dominant over winter and so if you take out that vector and it can no longer bite you then it won't be passing on the infection."

What can we do to protect ourselves against Japanese encephalitis?

Right now, there are two Japanese encephalitis vaccines in Australia.

Both of these vaccines have been "around for a long time" and have been recommended for particular groups such as piggery workers, laboratory workers and travellers.

Last week, the government announced it is purchasing 130,000 JEV vaccines, on top of the 15,000 already in Australia, that will be available from late March and April.

But at this stage, there is currently no recommendation for the wider population to get vaccinated.

As Dr Giles told The Quicky, "we don't want to unnecessarily use or recommend a vaccine if someone is not at any risk."

"There is ongoing work being done now to test birds, to test mosquitoes and to test obviously, peak populations, and find out exactly how extensive it is... Whilst we're getting that information, we need to protect those who we know are already at the highest risk."

Dr Giles said the vaccine may be considered for wider populations in the future, as it has been in other countries, but right now "we need more information to make sure that we're making the best use of the vaccine".

In the meantime, the best thing you can do to protect yourself from the virus is to avoid getting bitten by mosquitos, which are more active at dawn and dusk.