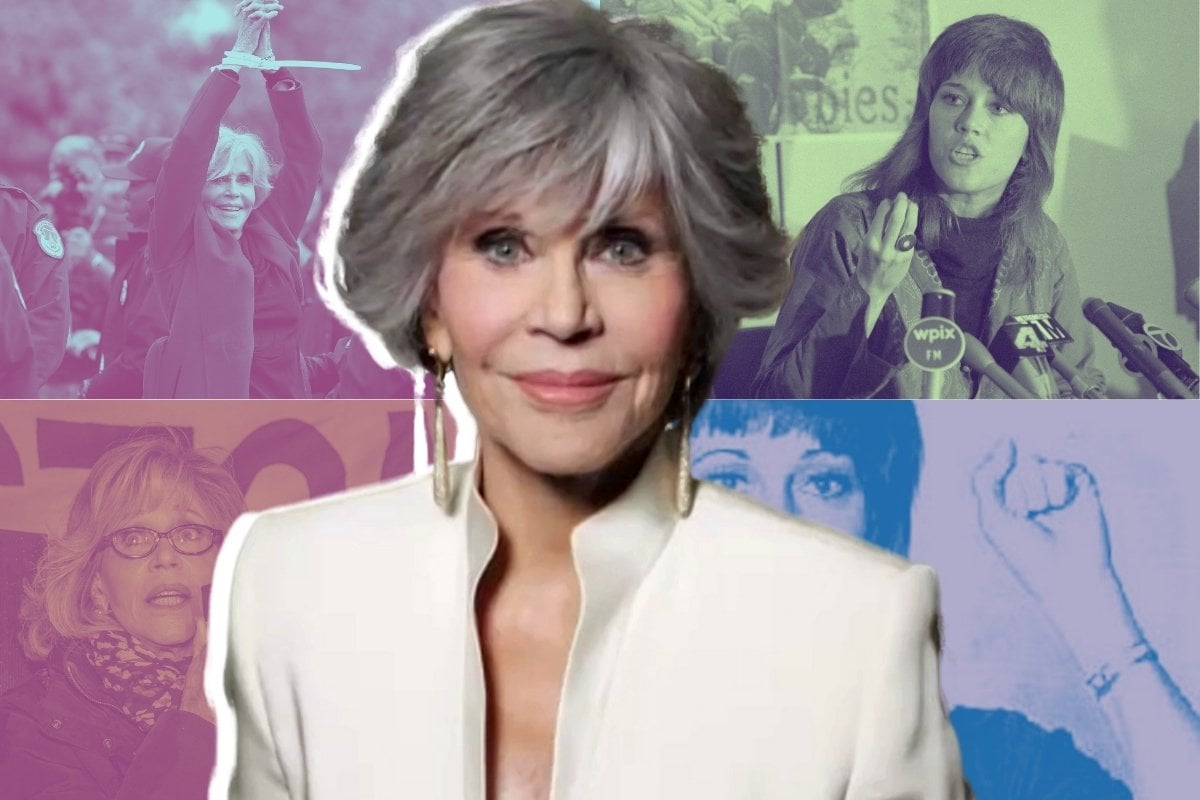 Grinning behind large sunglasses, the two-time Oscar winner was filmed being led away from the US Capitol building in Washington D.C. for engineering a sit-in at the Hart Senate Office Building. Her goal: to encourage lawmakers to take urgent action on the climate crisis.

These 'Fire Drill Fridays', which she coordinated with Greenpeace and Code Pink, attracted many of Fonda's famous friends and concerned citizens eager to curb global greenhouse gas emissions.

The movement adopted the colour red, and so each Friday, Fonda wrapped herself in a chic, crimson coat she'd bought on sale (her last ever clothing purchase), and marched down to the Capitol. As well as becoming a pop culture meme of 2019, Fonda's coat had a dual purpose. She later told the Washington Post that when she spent the night in jail after her fourth arrest for civil disobedience in late November, she used it as a mattress to cushion her sore bones.

It's just the latest cause in the career of one of Hollywood's most dogged activists.

Jane Fonda was born to a life of privilege. White, wealthy, and the daughter of famous actor Henry Fonda and Canadian socialite Frances Ford Seymour. But her childhood was a traumatic one.

Her father lived with undiagnosed depression. Her mother struggled with mental illness and spent several periods in a psychiatric facility where, in 1950, she took her own life. Fonda was just 12 years old.

The loss had a lasting impact on her.

"If you have a parent who is not capable of showing up, not capable of reflecting you back through eyes of love, it has a big impact on your sense of self," she told People.

"As a child, you always think it was your fault... because the child can’t blame the adult, because they depend on the adult for survival. It takes a long time to get over the guilt." 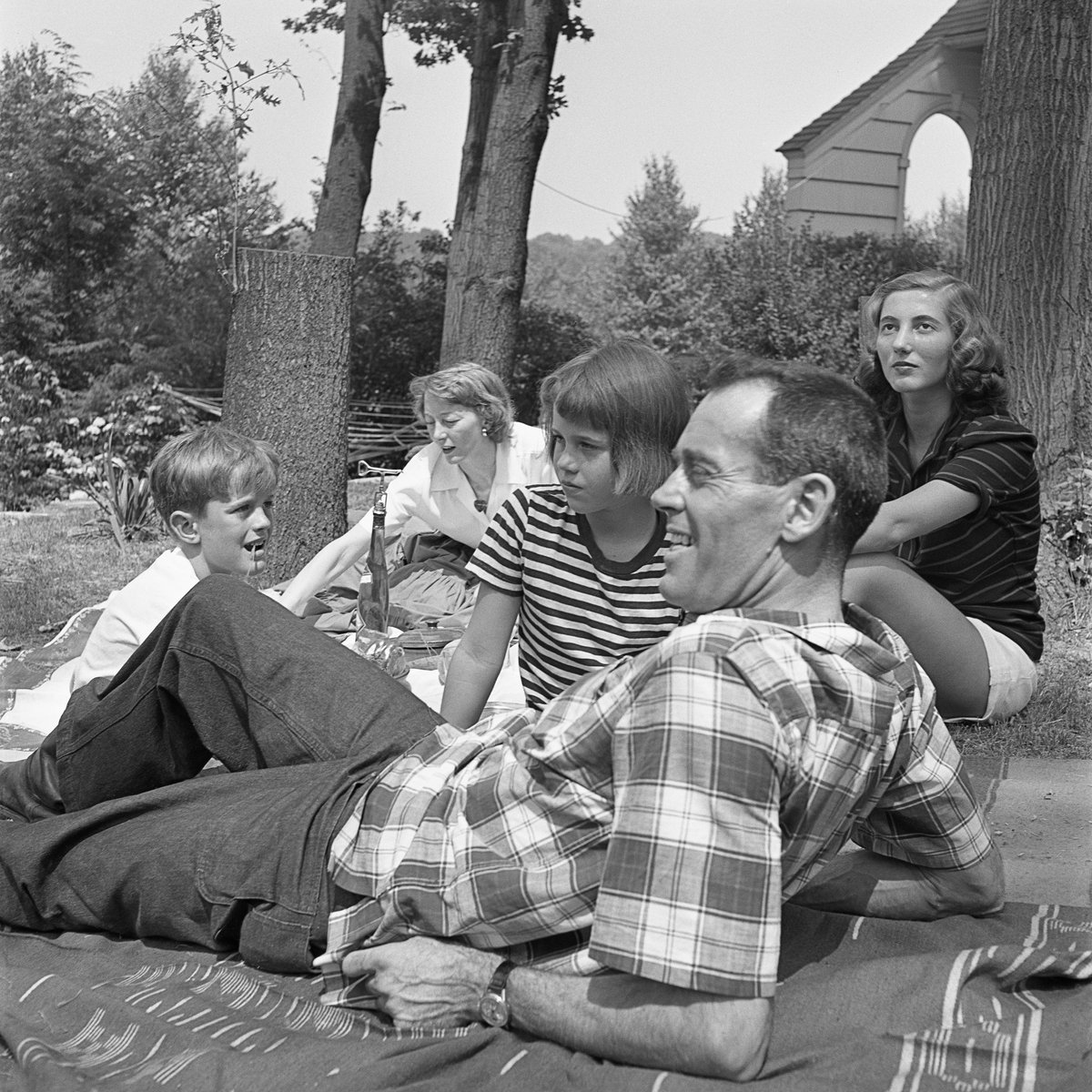 Jane Fonda (centre) with her parents and siblings in 1949. Image: Getty.

The path to healing was activism.

"I started off my life as a pretty depressed person," she told Jameela Jamil's I Weigh podcast. "And I sort of was that way until I became an activist in my early 30s. And then everything changed.

"I felt that I had a reason to be on Earth, a purpose in life."

Women's issues were central to that purpose.

In 2014, Fonda told a benefit that her mother had been a victim of child sexual abuse, and three years later, revealed that so had she.

"I've been raped, I've been sexually abused as a child and I've been fired because I wouldn't sleep with my boss and I always thought it was my fault; that I didn't do or say the right thing," she told fellow actor Brie Larson during an interview for The Edit.

"One of the great things the women's movement has done is to make us realise that [rape and abuse is] not our fault. We were violated, and it's not right."

Fonda has been right among that movement throughout her career, establishing the Jane Fonda Center for Adolescent Reproductive Health to prevent teen pregnancy, and lending her profile to causes from preventing violence against women to advocating for pay equality.

In 1972, Jane Fonda, then best known as the star of film Barbarella, was photographed sitting on a North Vietnamese anti-aircraft missile while on a trip to observe the damage being done to the country's water system by the American-led war.

The photograph outraged many Americans, as did her vocal opposition to the conflict in the press and via speaking tours.

Critics lobbed smoke bombs through her bedroom window and staked out airports to greet her and her children with attacking signs. Some confronted her directly. 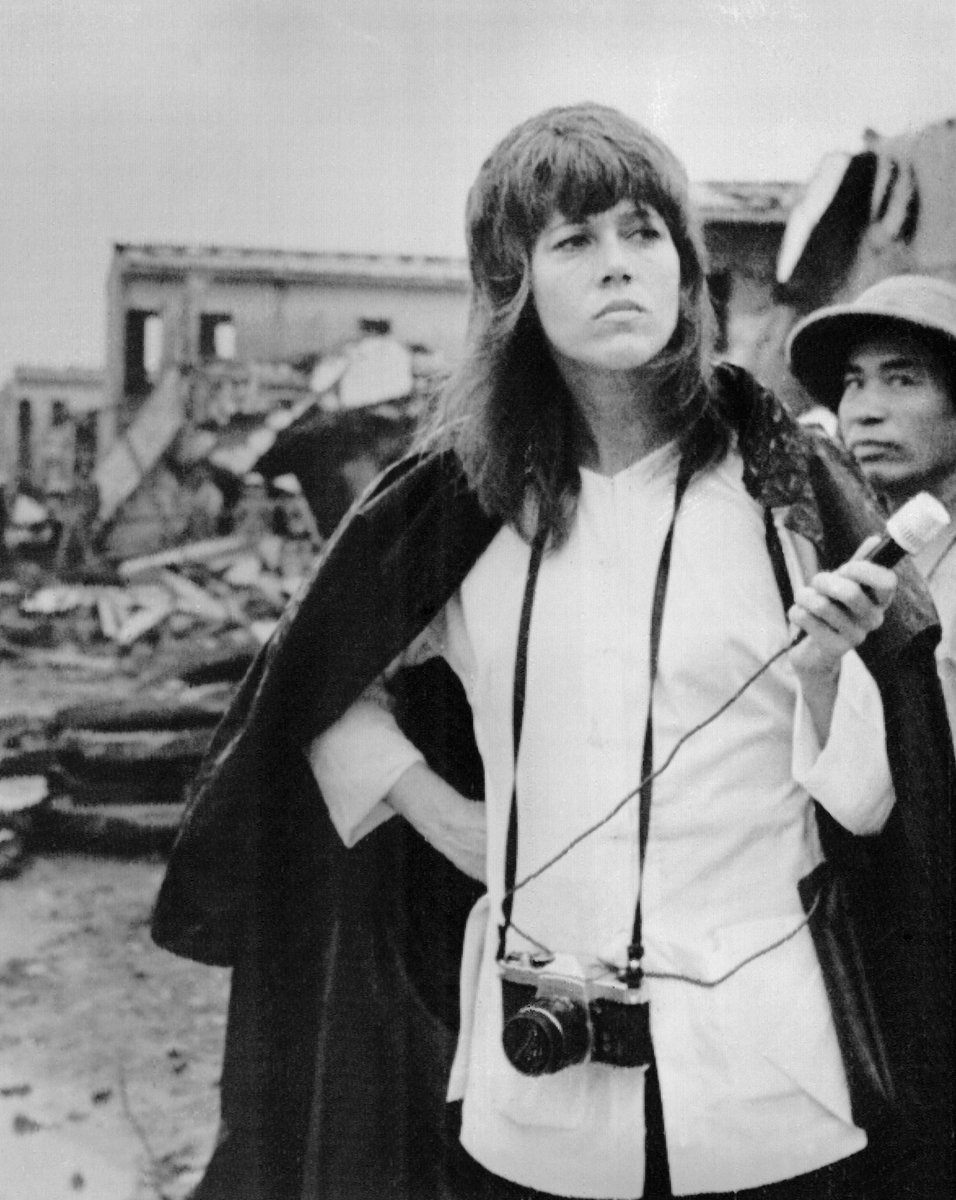 "I remember going someplace and I looked up and this gorgeous man in a pilot's uniform was walking towards me with this beautiful, big smile on his face. He came right up to me, and the smile disappeared," she recently told Jameela Jamil's podcast, I Weigh. "He said, 'I'd like to cut your f**king throat.'

"That was a real shocker."

It wasn't just the public looking to silence her.

Fonda later learned through a Freedom of Information request that she had been the subject of a three-year targeted counterintelligence effort to neutralise her impact — part of the F.B.I.'s broad attempts to silence activists. Her mail had been intercepted and opened (the first time for a US citizen), and her bank had been pressured to turn over her records despite not being issued a subpoena.

In 1970, she'd even been arrested on drug trafficking charges, after she was found with a bottle of pills at an airport after returning from a rally. The pills were later proven to be vitamins, a fact that Fonda told the arresting officers. But in a piece written for her website in 2009, she claimed they said they were under orders from the White House to detain her.

"I think they hoped this 'scandal' would cause the college speeches to be cancelled and ruin my respectability," she wrote.

The mugshot from that arrest is one of the most famous images ever taken of her, a symbol of individual defiance in the face of institutional power. 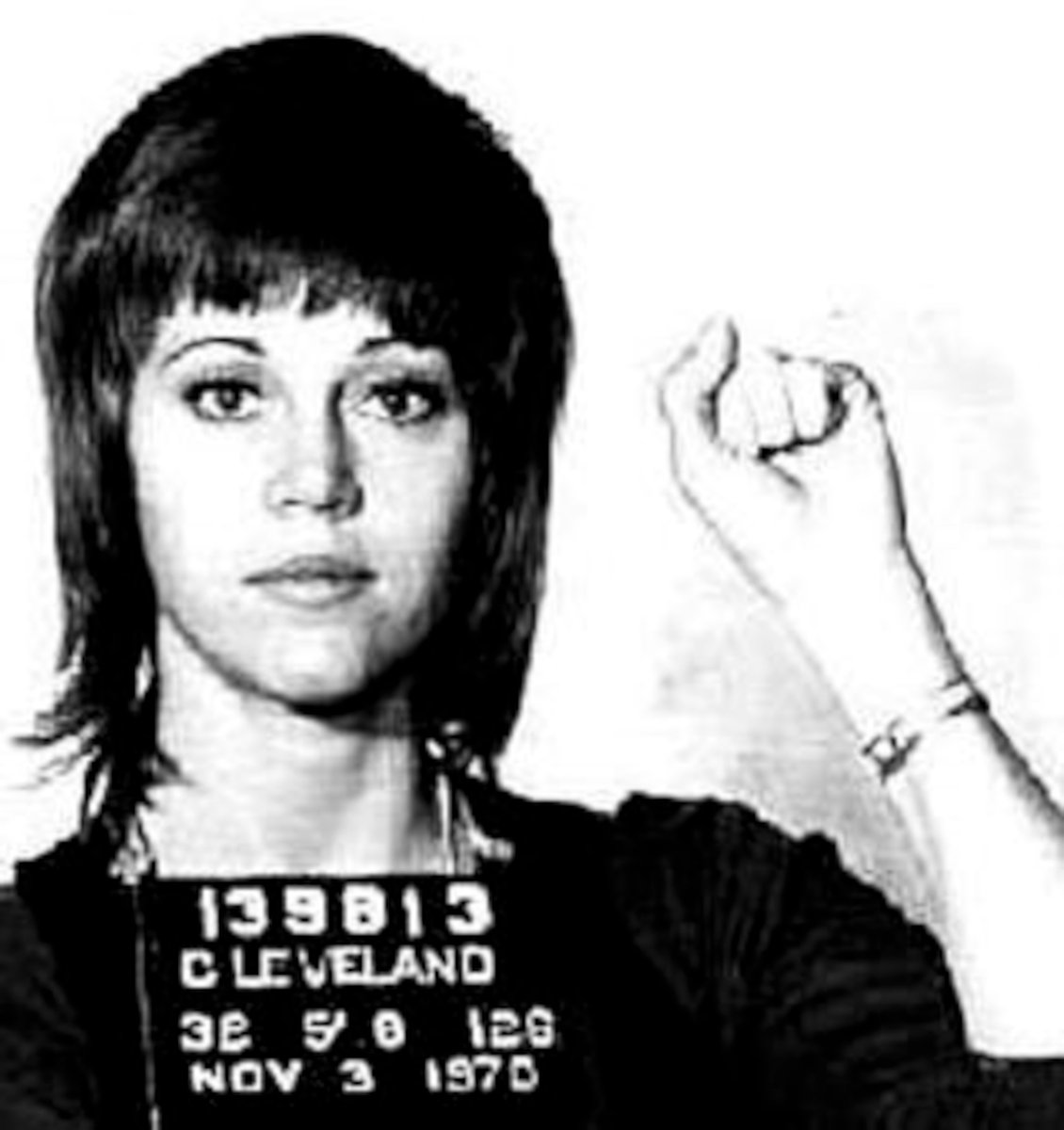 "It was scary, but I'm very stubborn," she told Jamil of that period. "And the more that they tried to do that to me, the more determined I became to not stop. They thought I was some kind of weak little daddy's girl... [But] I was gonna show them that no matter what they do to me, they're not going to scare me."

As well as focusing on the climate crisis, in recent years Fonda has been active in amplifying the message of the Black Lives Matter movement.

Speaking with CNN in the wake of George Floyd's death in 2020, Fonda said she'd spent the preceding three years studying racism in America.

"Because we’re white, we have had privilege, even the poor of us have had privilege, and we need to recognise that and we have to understand what it is that keeps racism in place — the policies, redlining, banking policies, mortgage policies — all of the things that are making it really, really difficult for Black people to lift themselves up," she said.

Racial equality has always been high on Fonda's agenda. In the 1960s, she aligned herself with the Black Panther Party and was embedded in civil rights protests.

The rest of Jane Fonda.

Activism has been such a central part of Jane Fonda's life that she's said it demoted others. Including her career.

Though the encouragement of legendary acting coach Lee Strasbourg nudged her down the path to stardom, she never truly felt at home in the industry.

Yet somewhere in between it all she managed to earn two Best Actress Oscars (for '70s films Klute and Coming Home), eight Golden Globes (including the prestigious Cecil B. DeMille Award for outstanding contributions to entertainment), form a production company and conceive films like Coming Home, Fun with Dick and Jane and, of course, 9 to 5. Plus, she's the star of the hugely successful ongoing television series Grace and Frankie. 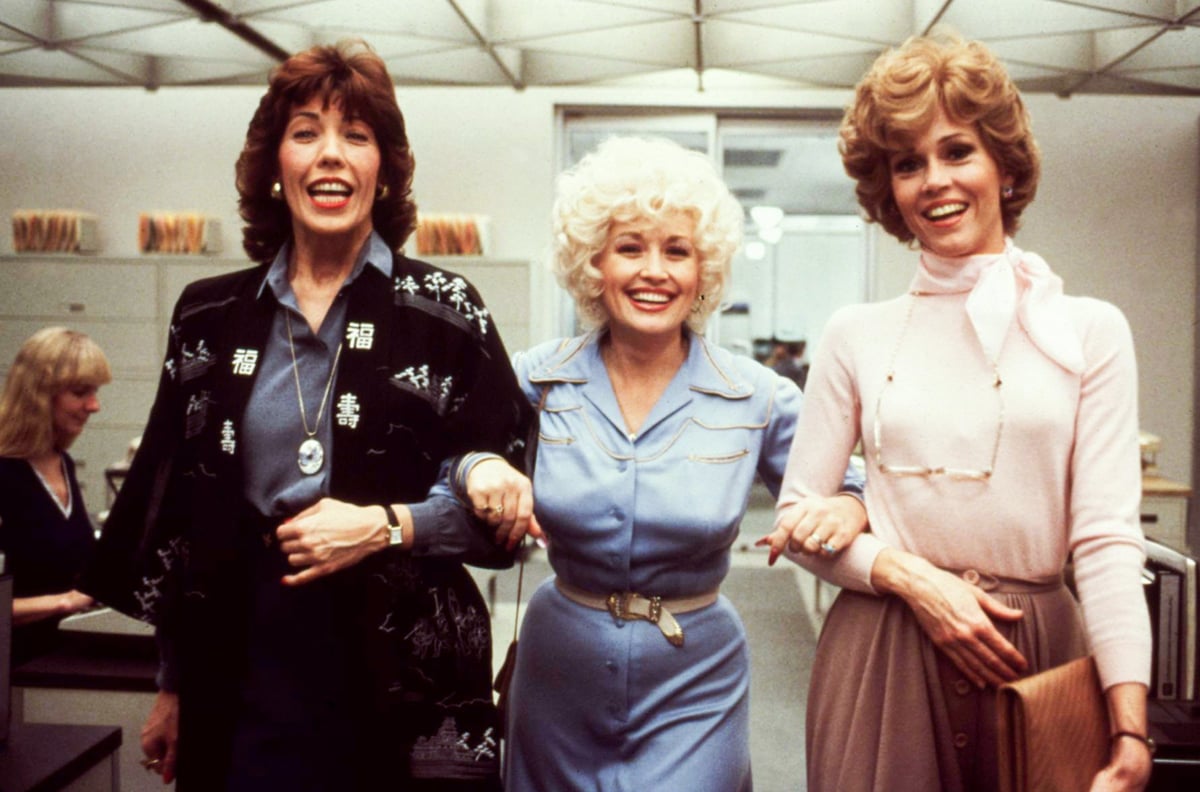 And of course, her legendary '80s workout video series. Although, even that was to raise funds for lobbying organisation the Campaign for Economic Democracy.

Then there were her relationships.

Fonda married three times, first to French film director Roger Vadim in 1965, with whom she had a daughter.

Three days after their divorce was finalised in '73, she wed activist Tom Hayden. She was three months pregnant at the time with their son, and together they unofficially adopted a daughter.

That son, Troy Garity, is now 47 and recently became a father; an event that's led Fonda to reflect on her own parenting. 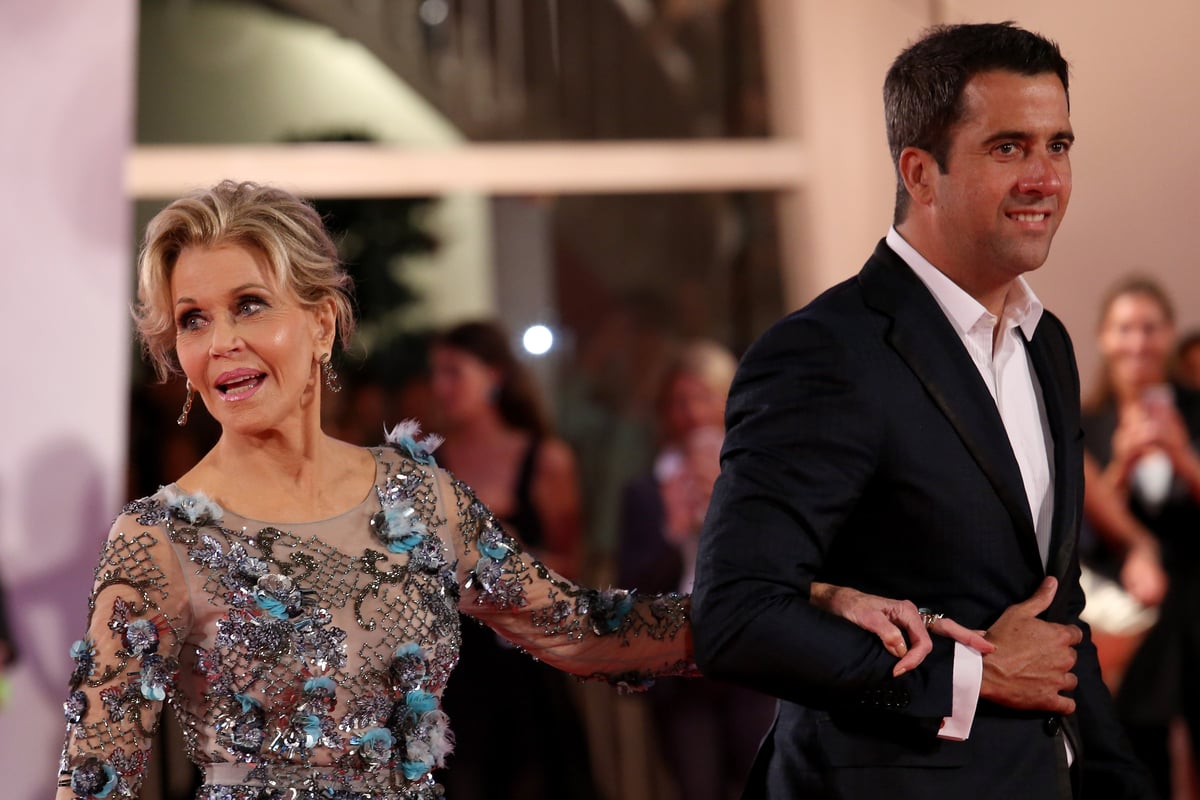 Though she had brief relationships afterward, she's content being single. Herself, and her causes, are first.

"I realised that I'm really just not gifted at relationships. You wouldn't know it because I do what women do: I really put myself wholeheartedly into it, I give myself over a lot. But then a point comes when I realised that I have to separate myself and go my own way if I'm going to grow," she told I Weigh.