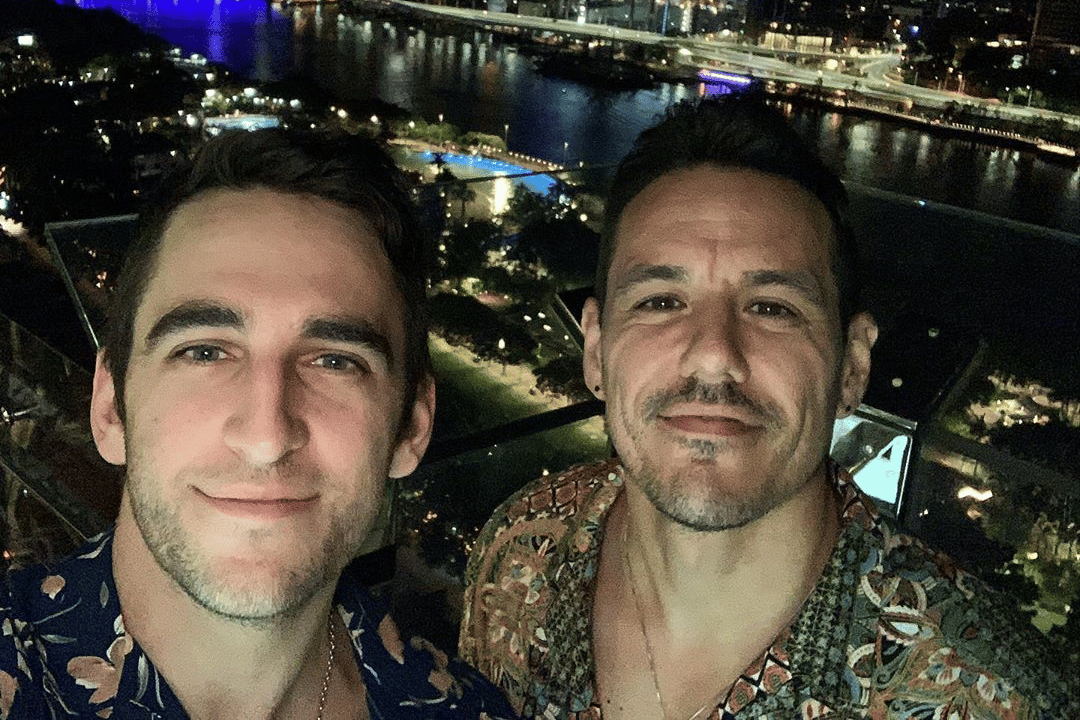 Jack Chambers had his wedding to fiancé Grant Almirall all planned. It was going to be in Brisbane in April this year. And then, just weeks before the big day arrived, the wedding had to be postponed.

“We were so, so close, almost there, and then COVID-19 came along,” Chambers tells Mamamia. “We’ve postponed to May next year. We just thought we need to put it a little further in the distance because we just don’t know when things will start to come back to normal.”

It was dance that made Chambers a household name when he won the first season of So You Think You Can Dance Australia in 2008, and it was dance that was responsible for Chambers meeting Almirall.

Four years ago, Chambers was playing Cosmo Brown in the Australian touring production of Singin’ In The Rain. South African performer Almirall had been brought into the cast as standby understudy for the role of Don Lockwood, played by Adam Garcia.

“He was able to save the show when Adam injured himself,” Chambers explains. “On stage we were best mates because we were Don and Cosmo, but we just started getting to know each other and then something else happened! So it’s been wonderful.”

Because Almirall is from South Africa and is often touring, the two have spent a “good chunk” of the past four years in a long-distance relationship.

“We talk every single night on Skype,” Chambers says. “I feel like Skype should sponsor our wedding!”

He says a long-distance relationship is actually not that hard “when you really, really love a person”, but after four years, they’re sick of being apart.

“We’re dying to get into the same country.”

Chambers says he and Almirall would both be happy to be in New York, only “probably not right now”.

New York was Chambers’ dream when he went on SYTYCDA, when he was a “very, very green” 19-year-old. Although he had an “absolute blast” on the show, he struggled afterwards with being recognised when he went out in public.

“People would stare at me if I was at a café or a restaurant or going shopping, things like that. I started to get a little bit of anxiety in making sure I never left the house with my hair not done. It did make me a little bit anxious.”

What made him happy was knowing that the show had given confidence to boys who wanted to be dancers.

“I remember, at the time, classes had a bit more of an influx of boys starting dance. So that was an amazing thing.”

A year after SYTYCDA, Chambers went to New York to pursue his dream. He got plenty of work, including performing with Liza Minnelli, but a Broadway role proved elusive, due to visa complications. He ended up returning to Australia to star in Hairspray. Since then, he’s gone “wherever the work has taken me”, which included touring the world with Hugh Jackman last year in The Man. The Music. The Show.

Chambers first met Jackman the night that he won SYTYCDA, 12 years ago.

“I went on Rove,” he remembers.  “We crossed paths and he congratulated me, and I was very starstruck. Who knew that so, so, so many years later I’d get to share the stage with him? That was one epic world tour.”

On tour, Chambers says Jackman really wanted to get to know everyone who was touring with the show, not just performers but also crew.

“We would actually do social things together on days off,” he says. “In Australia we went to the zoo. Whatever you’ve heard about Hugh and how lovely he is, he is that, but 10 times more.”

When Chambers isn’t touring and performing, he teaches dance. The age of some of his students reminds him of how long ago he was on SYTYCDA.

“When I’m teaching and I’m realising that this person was not even one when I was on the show, or not even born, things like that, you go, ‘Oh my goodness.’”