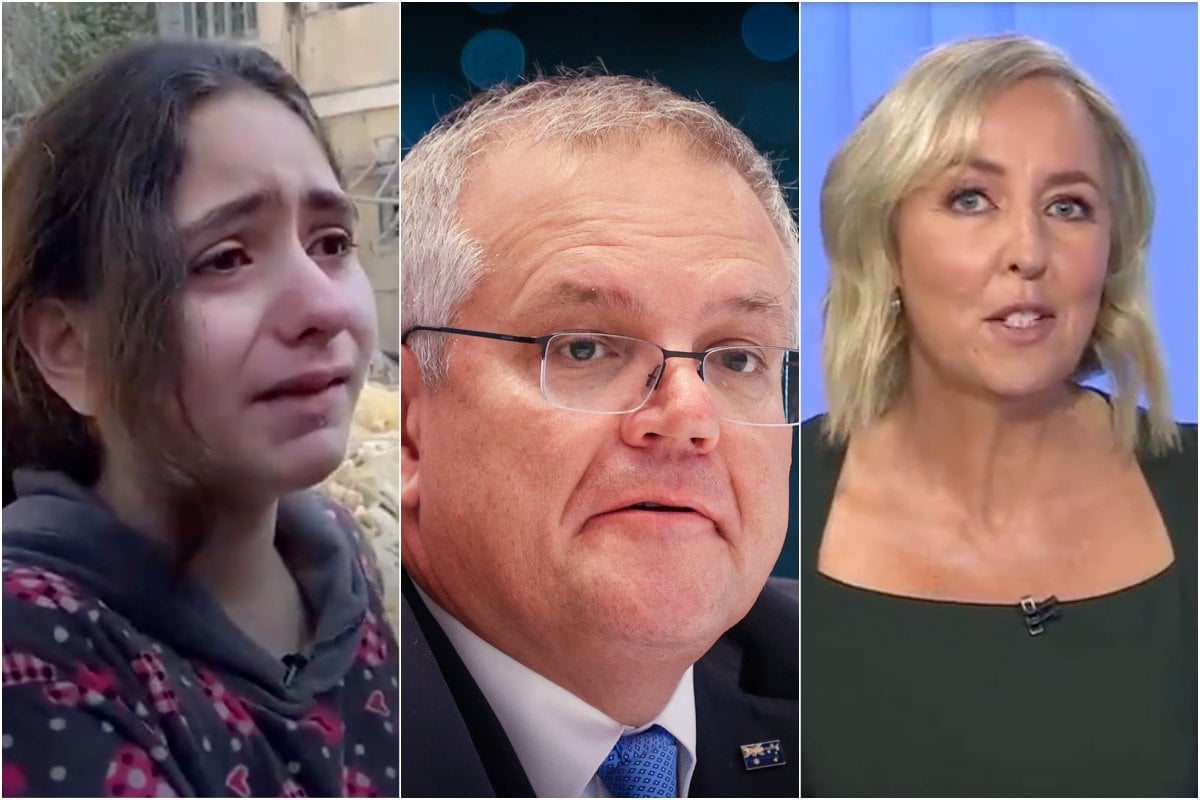 An Israeli air strike in Gaza has destroyed several homes, killing 42 Palestinians, including 10 children, as militants fired rockets at Israel with no end in sight to seven days of fighting.

The Israeli military said the 42 civilian casualties on Sunday were unintentional. It said its jets attacked a tunnel system used by militants, which collapsed, bringing the homes down.

10-year-old Nadeen Abdullatif, who survived a bombing in Gaza’s Al Shati camp, gives her account of the attack pic.twitter.com/vpHE4PaKGm

Netanyahu also defended an Israeli air strike on Saturday that destroyed a 12-storey building where the Associated Press and the Al Jazeera TV network had offices. He said the structure also housed a militant group's intelligence office and was thus a legitimate target.

"We are acting now, (and) for as long as necessary, to restore calm and quiet to you, Israel's citizens. It will take time," Netanyahu said in a televised address after meeting with his security cabinet.

“We note that Israel has not presented any evidence to support its claim the [al-Jalaa tower] building was used by Hamas”, said The Foreign Press Association.

The association has asked for a meeting with Israeli officials over the incident https://t.co/Dna74sMZdg pic.twitter.com/0dLxiDoJnt

The death toll in Gaza has jumped to 192, including 58 children, its health ministry said, amid an intensive Israeli air and artillery barrage since the fighting erupted last Monday.

Ten people have been killed in Israel, including two children, Israeli authorities say.

Scott Morrison has hit back at calls for Australians to be brought home from overseas whether they have tested positive for COVID-19 or not, saying it doesn't make sense.

About 80 returnees are now in quarantine in the Howard Springs facility in the Northern Territory after they landed from India on Saturday following the lifting of the travel ban from the virus-ravaged country.

Australian cricketers who fled COVID-ravaged India will land on home soil shortly with all players and staff going straight into hotel quarantine. #9Newshttps://t.co/bLtZG5p9EM

The plane was only half full because more than 40 people who tested positive pre-flight along with about 30 of their close contacts were barred from returning.

However there are reports of some inconsistency in the testing results, adding to the frustration of Australians wanting to return home.

The prime minister conceded India is a very difficult environment to operate in right now.

"We will work closely with Qantas who are obviously conducting that testing regime as part of their process and they will get every support from us," Mr Morrison told reporters in Gladstone, Queensland on Sunday.

But he said it was essential to have a rigourous testing regime when coming to Australia, whether it is India or other countries like the UK.

"I have seen the suggestions from others who seem to think that we can put people who have tested COVID positive on planes and bring them into Australia," he said

"I mean that just doesn't make any sense."

Even so, Opposition Leader Anthony Albanese said if Australians had been brought home by last Christmas as the government had promised, they wouldn't be COVID positive now.

The next government-facilitated flight is expected into Darwin on May 23.

Acting Victorian Premier James Merlino says a government MP's purported use of their parliamentary office for sex was distressing and inappropriate but he won't endorse a formal ban on sexual activity in parliament.

The government has raised concerns about the accusations with Victorian Speaker Colin Brooks, with a spokeswoman saying this was "the appropriate avenue to make or refer complaints about MP conduct".

The claims were first raised in March, with News Corp reporting on Saturday that a government MP allegedly had sex in a parliamentary office last year.

Mr Brooks is leading a cross-party process to develop a new framework for MP conduct intended to include new and independent avenues for complaints.

Mr Merlino on Sunday told reporters he didn't want to pre-empt Mr Brooks' proposals but admitted he was concerned by the MP's reported conduct.

"The conduct was inappropriate, it doesn't reflect community values (and) concerns were raised with the Speaker," Mr Merlino said.

"I would expect that individual reflects on that behaviour. There's critical work the presiding officers are doing in regards to conduct of members of parliament.

"That work is almost finalised, it will be responded to by the government and will see some broader change in terms of how we deal with those issues, and I think that's a good thing."

The MP's identity is yet to be publicly identified.

A woman's body has been found inside an inner Melbourne apartment with her death being investigated as a homicide.

The 63-year-old woman was found in the apartment on Surrey Road in South Yarra about 9pm on Saturday, Victoria Police said in a statement.

A man is behind bars, arrested over a woman's death in Melbourne. Neighbours made the grim discovery, finding her body in the stairwell of a public housing block. | @brendancrew pic.twitter.com/rfU5TeM8Yb

The Herald Sun reports neighbours discovered the body and a "horror scene" in a stairwell.

The woman's cause of death is yet to be determined, but police have arrested a 41-year-old man who was arrested on Sunday afternoon.

Police have charged a man with attempted murder and multiple domestic violence-related offences following a house fire in the northern Brisbane suburb of Wooloowin.

Emergency services were called to a property in Eveleigh Street early on Sunday morning following reports of a house fire.

Two women were in the house at the time of the fire and escaped without injury.

A man will face court this morning accused of burning down a home near Brisbane while two women were inside. #9Today pic.twitter.com/gZGObL2b4W

He has been charged with two counts each of attempted murder and arson (vehicle and house), and one count of contravention of a police protection notice, assault occasioning bodily harm, common assault and wilful damage in relation to earlier incidents at the same address.

On Fox Sports on Wednesday night, Daily Telegraph columnist Paul Kent was addressing reports that Stuart's relationship with some of his Canberra Raiders players was on shaky ground, and paraphrased the coach's response.

"As Ricky said to me - 'If I can't have tough conversations with my better players I might as well coach netball'."

Stuart later apologised at a press conference saying, "I respect netball. I'm sorry if I offended any girl or boy that plays netball. All sports are tough. I understand that," Stuart said.

But Ellis told Sports Sunday, "Firstly, I don't think that it was a proper apology that he made. Secondly, I didn't want an apology. All I wanted was for him to come out and say, 'You know what, I've reflected, poor choice of words, I won't do it again'. He doesn't have to apologise. He just needs to acknowledge that he got it wrong."

She added that people are saying 'why are you offended by this? Get a life.' But "it's a build-up," she said.

"It's paper cuts, over a 1000 little paper cuts that actually get to the point where you go, 'You know what, you have to stop. It's the 21st century, you have to stop making netball and women's sport a euphemism for being soft. You can't just have a throwaway line'."

Coronavirus restrictions across Greater Sydney will ease from midnight on Sunday after NSW recorded another day of zero locally acquired COVID-19 cases.

It means mask usage will not be compulsory on public transport and the limit on private gatherings in the home will lift, restrictions that were imposed 10 days ago after a mystery case was reported.

Masks will no longer be compulsory on public transport or for customer-facing staff in hospitality venues, however NSW Health continues to strongly encourage their use on public transport and in other settings where physical distancing is not possible.

From Monday people over the age of 50 can get their COVID-19 vaccination from a GP.

Since opening up the vaccination process to this age group in the past couple of weeks, it has only been available at special vaccination hubs.

Australia's vaccination program topped three million on Friday and Prime Minister Scott Morrison believes it is now going from strength to strength, noting even on Saturday a record 30,000 people got the jab.

"If you are over 50, you can go to your GP who are providing these vaccines," Mr Morrison told reporters in Gladstone, Queensland on Sunday.

"So I think we will continue to see that build."

He said about 85 per cent of residents in aged care facilities have now been vaccinated, but he urged more people over 70 to get the jab.

But he remains cautious on when Australia's borders can open up again, even as some of his backbenchers are calling for an early resumption to travel.

Forecasts in last week's federal budget assumed all Australians who want the jab would be vaccinated by the end of the year, but international flights would not get into full swing until mid-next year.

A new poll has found an overwhelming number of Australians don't want the international border to reopen until at least mid-2022 or until the pandemic is under control ✈️❌ pic.twitter.com/uWUzdvTA4B

India has reported a reduced rise in daily COVID-19 cases for the third straight day, but the number of deaths in 24 hours was higher than 4000, taking the country's overall toll to 270,000.

Deaths grew by 4077, while infections rose by 311,170 - the smallest rise in daily cases in more than three weeks, health ministry data showed on Sunday.

Infections have risen by more than two million over the past week and deaths by nearly 28,000.

Shahnawaz Shaikh -- better known as the "oxygen man" -- runs an NGO providing free oxygen to Covid-19 patients in Mumbai as India battles a devastating second wave of the virus.

He even sold his car to raise funds. https://t.co/YvN5ksHceN

Cases have fallen steadily in states hit by an initial surge of infections, such as the richest state of Maharashtra and the northern state of Delhi, after they imposed stringent lockdowns.

But surges have been seen in states such as Tamil Nadu in the south and rural areas.

Prime Minister Narendra Modi on Saturday called on officials to strengthen health care resources in rural areas and step up surveillance as the virus spreads rapidly in those areas after ravaging the cities.

- Prince Andrew, the Duke of York, has been removed from as many as 50 of his royal patronages, a further sign he won't be part of Prince Charles' slimmed down monarchy.

- Seven people have drowned and two are missing after a tourist boat carrying 20 people capsized in a reservoir as the passengers tried to take a selfie in Indonesia's central Java.

- A fast-spreading COVID variant first identified in India could knock lockdown-easing off track in the UK, with the government set to make a decision on June 14.

- Two American half-brothers who spent decades behind bars after being wrongfully convicted of the rape and murder of an 11-year-old girl have been awarded US$75 million in damages.