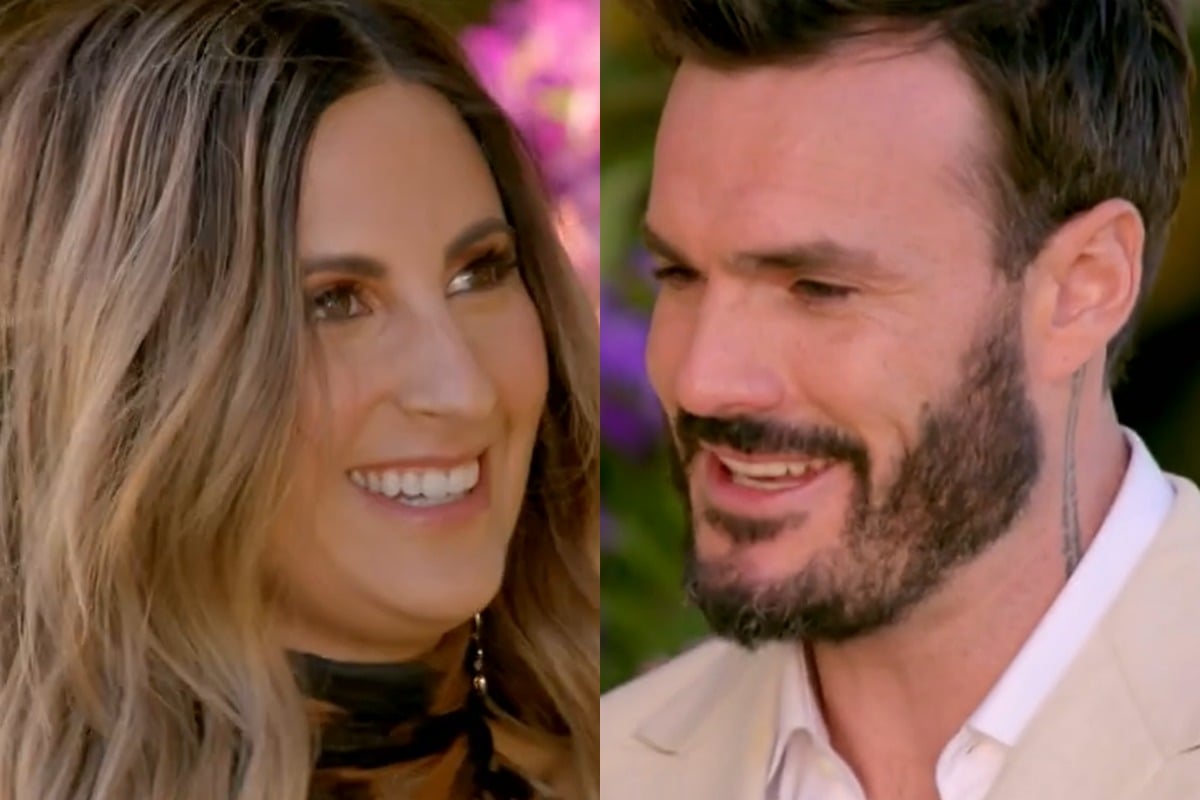 It's hard to imagine anything more awkward than watching your boyfriend tell you and another woman that he's in love with... the both of you.

But last night, that's exactly what Locky Gilbert and Irena Srbinovska did.

On last night's finale episode of The Bachelor, Australia watched on as Locky Gilbert boldly told Bella Valeris that he was falling in love with her, before brutally dumping her on national television.

It was a moment that quite frankly overshadowed Locky and Irena's first moments as an official couple.

And before the reality show finally made it to air on Thursday night, Locky and Irena were forced to have an awkward conversation about that very moment.

"Locky and I actually discussed the finale right after we finished filming. I have had a bit of time to process it all," Irena told Mamamia's daily entertainment podcast, The Spill.

"Obviously you don't want to see the guy you're in love with tell another woman that he's in love with her but we've had some time to process it and talk about it," the 31-year-old added.

"Locky was just being real and honest with his emotions and I can't fault him for that."

In the final episode of The Bachelor, viewers (and contestants alike) were left feeling confused when Locky told both Irena and Bella that he was falling in love with them.

"It's ripping me apart that I'm in love with both of them. Like, it shouldn't be this way, but it is," he said.

"How do you break someone's heart when you're in love with them?"

Speaking to The Spill's co-host Kee Reece, Locky admitted that his final decision ultimately came down to his hopes and plans for the future.

"I was madly in love with the both of them but for completely different reasons," he said.

"With Irena, it was the future and a lifelong relationship. With Bella, it was the now and then. In the end, it was just the uncertainty. Normally I would go for that, but it's just not sustainable. Whereas with Irena, I'm going to be with her for the rest of my life," he continued.

"I'm 31 and I can't really live like I used to with just going with the flow. I needed some stability.

Early on in the show, Irena and fellow frontrunner Bella shared a close friendship.

But after 'Love in Lockdown', their friendship seemed to fall apart with little explaination.

During her interview with The Spill, Irena shared that she hasn't spoken to her former best friend since the show.

"Unfortunately, the friendship did end," the nurse shared.

"I think the biggest thing was that we were both falling in love with Locky and we both realised that we couldn't maintain a friendship and continue our relationship with Locky.

"I wish her nothing but the best and I hope she finds happiness and I'm just focusing on my future with Locky now."

Locky chimed in as well, adding that Irena "never once said a bad thing about the other girls" in the mansion.

"Some people are saying that Irena was saying stuff about the girls to me and trying to put people down. The thing is, Irena never once said a bad thing about the other girls. Not once," Locky said.

"If it was anyone, the other girls were saying bad stuff about Irena," he added.

"I'm not too sure where it started, because Irena went through a really hard time towards the end and I only saw that when I watched the show back. Irena never once [told me] that she was doing it hard or that the girls had isolated her.

"[It's weird] watching it back and hearing all these girls say, 'You haven't seen the full story, Irena's been saying this stuff.' Irena never once said a bad thing about anyone. She still hasn't. Even when people bag out Bella on Instagram, Irena gets upset and kind of defends Bella."

Now the show has wrapped up, Locky and Irena are looking forward to the future as Irena prepares to move from Melbourne to Perth.

Unlike Bachelor couples before them, the pair haven't seen each other since filming the finale due to COVID-19 restrictions.

"We were apart for a couple of months and it's been difficult but that's obviously the situation with border restrictions and COVID," Irena said.

"We've done the best that we can, we've been on the phone non-stop, video calls, texting. I think we've come out of it stronger."