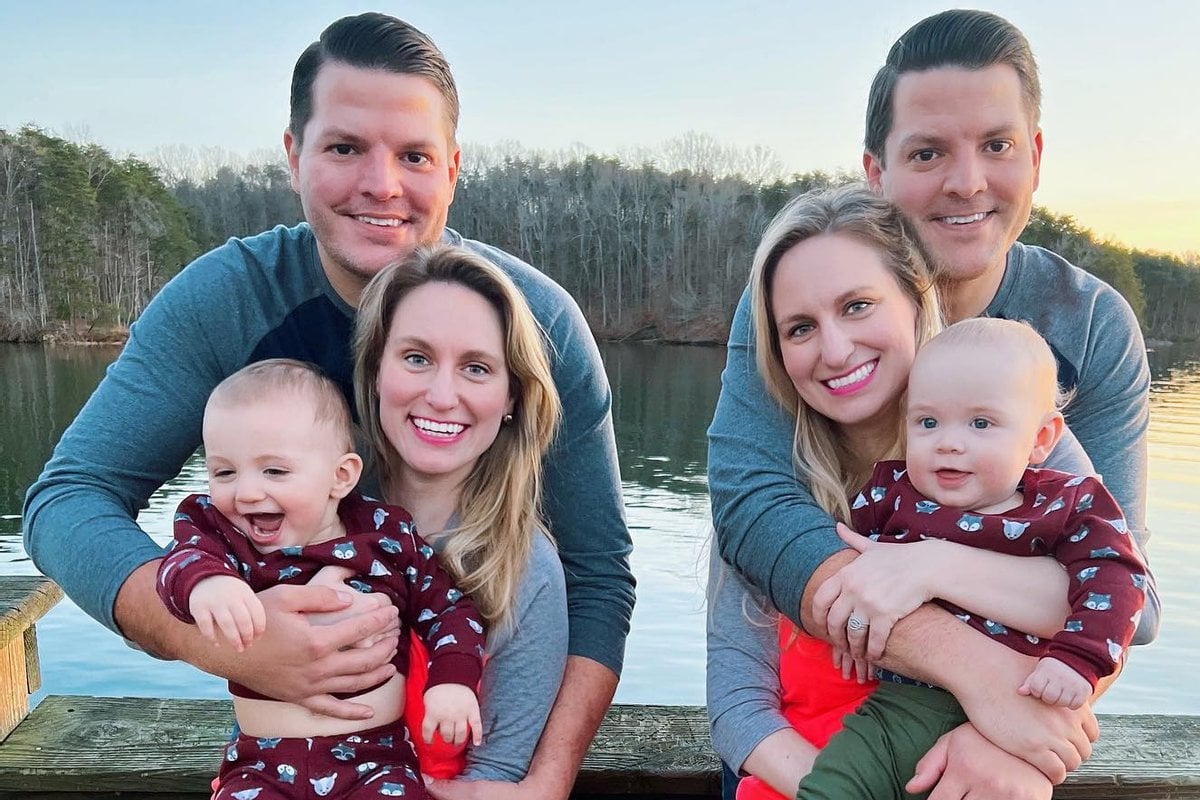 Identical twin sisters Brittany and Briana always dreamt of marrying another set of identical twins; and in 2018, those dreams came true.

At the 2018 Twins Day Festival in Twinsburg, Ohio, Brittany and Briana married Josh and Jeremy Salyers in a joint ceremony. The couples met at the festival the year before and got engaged in a joint proposal at a park called Twin Lakes.

On their wedding day, the couples were married by identical twin chaplains, had a twin procession as part of their bridal party, and said their simultaneous "I do's" surrounded by friends, family, and thousands of twins and multiples.

Despite having dated "singletons" in the past, Brittany and Briana knew that having relationships with another set of twins was ideal.

"I think for a lot of people in the dating world, specifically singletons, they are looking for their other half. We each already had another half – a literal other half," Brittany, 35, told USA Today.

"And we each previously had experiences where we dated people who were annoyed that it was not them who was considered the other half. But the four of us all understand the twin thing."

Two years after the couples got married, the sisters announced they were both expecting.

Since then, the four of them have lived in the same home together while operating their own wedding venue location company.

"It was something we all four wanted and when we got engaged, we all wanted it that way," Brittany told the publication.

"It's something that's very nice. [Josh and Jeremy] understand the twin bond like we do. We get to have a lot of together time."

Jeremy and Briana welcomed their son Jax in January 2021, while Josh and Brittany welcomed Jett in April of the same year.

Their children are considered more than first cousins.

"But we have quaternary twins."

"Such children are not only cousins but also full genetic siblings, who are the same age, making them a very rare type of sibling set," Briana told the publication.

The sisters hoped this would happen.

"We were hoping that we would have overlapping pregnancies so that this would happen," Briana said.

"We thought it would be really cool. There [are] only 300 quaternary marriages known in the history of the world."

The couples are raising the babies as if they have four parents.

"Technically Josh and I are the parents of baby Jett - I gave birth to Jett. But really, Jett has four biological parents because Briana and I share DNA and Josh and Jeremy share DNA," Brittany said on Extreme Sisters.

"We are raising baby Jett as though he has four parents."

Brittany and Briana are also considering whether to try for another baby each.

"We are debating if we should go for one more pregnancy each or not. We will make a decision pretty soon," she continued.

"The babies are still pretty young [and] we are trying to wait a little longer to see what to do.

"If we do expand our families, we would hope to be lucky enough to experience overlapping pregnancies together again."

Reply
Upvote
AMAZING!  And quite perfect really.
B
base2567 6 months ago