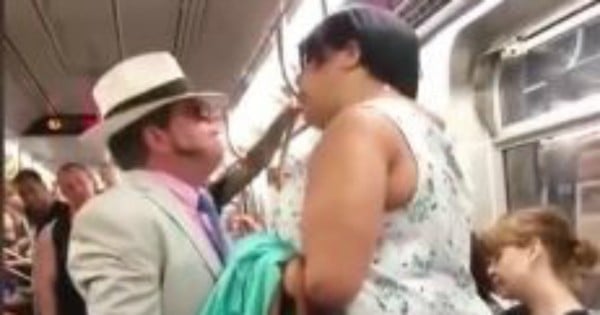 The New York Subway is insane.

As a person who grew up in the New York City area (and is now living in Brooklyn) it’s very normal for me to see at least one ridiculous fight, rodent or unwelcome bodily fluid before 9 a.m. Every morning on my commute, I watch the circus that is the L train (the main line between Brooklyn and Manhattan, and one of the most notoriously busy in the city) unfold around me. In fact, it’s almost weirder if something doesn’t happen. It’s too many people, with too many opinions, all shoved into a small train car together. And as the weather heats up, people become exceptionally cranky.

But a few weeks ago I saw a subway fight unlike any I’ve seen before. And I’ll say it again: I’m a New Yorker. I’ve seen my fair share of nuts.

Then .Mic published a video on Facebook. It now has over 16 million views. I immediately realized: it was the same fight. In fact, I was in it.

You can see my cameo in the background right at the start. I’m on the left, holding a coffee and watching the horrifying bigotry unfold in front of me.

This is how things unfolded.

There was a small, red-faced man in a seersucker suit, wearing a straw hat, and sunglasses—inside the subway.  I didn’t catch his name, but can only assume he was an extra on Miami Vice.

Mr. Miami Vice got on the train and started yelling racial slurs at a black woman sitting across from me. She had a seat, he didn’t, and this was enough to make him go off.

He called her horrible names, and just…didn’t stop. It was terrifying. He called her a c**t, multiple times. He told her he was supporting Republican presidential nominee Donald Trump—so she would “go back to the fields”. I have never experienced such scary, blatant racism in my life. Being stuck in a train car with this hate-filled man was hell on earth.

I can’t even imagine what it was like to be the woman he was yelling at.

Back at my computer, I read the comments on the video. There were the usual opinions: Trump supporters defending their candidate, and other commenters who were plain ignorant, just there to rant. There were people addressing mental health concerns and gun control. "What if this man had a gun?"  they asked—a valid and frightening concern.

But the comments that hit me hardest were the ones that asked why nobody had helped. I've always considered myself somebody who does the right thing, who stands up in situations like this and helps. But on the train, I didn't. I froze. I got scared.

Watching the video, I was angry. Not because I felt guilty (which I did). But because somebody did help, and she got cut out of the video.

In the middle of this turmoil, in the middle of this scary, racist, hate-filled moment one woman stood up and helped. At the end of this video you see her hands, but that's all she gets. The bravest woman on that subway car got cut out of the video.

To be fair, it might not be anyone's fault the video ended there. It could be an issue of timing, or just low battery. And I'm so glad .Mic put it up. People need to see this. But they also need to know what happened after it.

This other woman, who was right at the back of the train, stood up. She came over and put her hands on the man's shoulders, firmly steering him away from the situation to calm him down.

I don't think she knew him, but as she moved him away, he stopped yelling, and just walked with her. She saw a person in need (let's be clear, this was the woman being showered with verbal abuse) and helped, while everyone else, including me, stood there staring.

This unknown, off-camera woman is the most important part of the whole story.

Sadly, an out-of-control man on the subway is not uncommon. But the woman who stood up and helped? She is. She risked the wrath of someone who was clearly unstable.

And to me, she was magic—pure calm in the face of pure crazy. She did not raise her voice or validate his opinions. She simply did what she needed to do to diffuse a frightening situation, and help a woman under attack.

Then she got off the train, and, I guess, just continued on with her life. But I will never forget her.

That video sickened me to the core and i want to know what happened to the man to make him so bitter. I felt so sorry for that woman and i hope she is doing well.

I cannot for the life of me understand why people fail to realise that it doesn't matter if you're white, brown or purple, it doesn't matter if you believe in Bhagwan, Jesus or Allah, the fact is that some people in this world are nice and some are not. Having more Melanin in your skin does not determine whether you're a good person or not.

New York City has over 8 million residents, the same as one third of the entire Australian population combined. To focus and draw conclusions from a subway incident with one nutcase and one person being decent to make your point is disingenuous.