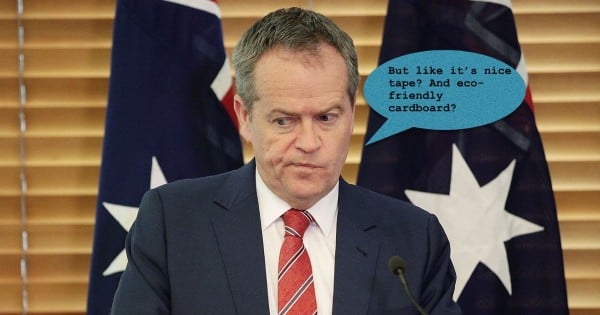 If you’re anything like me, you’re probably feeling a tad disillusioned with Australian politics at the moment. I mean, you really want to give a shit. You want to be informed. You want to exercise your voting right as a conscionable tax-paying Australian citizen – and you want to do it responsibly.

But when you’re being asked to choose between an out-of-touch millionaire who declares that parents should “shell out” to help their children buy into an impossible housing market, and a man who was recently likened to “a pile of wet cardboard boxes held together with tangled sticky tape,” you’d be excused for pouring yourself a tall glass of wine at 4pm and Googling cheap flights to Canada.

Of course, you could always vote for the Greens. But for those of us only semi-knowledgeable (to be generous) in local politics, what the hell's to be made of the rumours already circulating that the Greens have done a secret back-door deal with the Liberals to be placed higher than Labor on the Libs’ how-to-vote card in exchange for support for the Coalition’s Senate voting reform bill?!?!

ARE THERE NO GOOD GUYS LEFT IN THE WAR FOR OUR HUMBLE ISLAND NATION?

"Nobody cares about nothing – you don't have to be engaged with politics or like the duds we've got to choose from to know what you want from an election," says GetUp! Campaign Director Sally Rugg.

"My advice would be to think of the thing you really care about - whether it's about your ability to buy a house or about your internet speed, or something wider like tackling domestic violence or the Great Barrier Reef getting bleached."

"Whatever it is you care about, use your vote to back it."

So with that in mind I present to you a comprehensive guide to voting in this year's federal election, even if you honestly – you know, deep down – don't give as much of a shit as you probably should. When it comes to election day and you have to scrape yourself off the couch to go vote, if only to avoid a fine, it's important that you can do so in a way that minimises national damage.

Because Donald Trump is a real thing, and he is happening right now.

Typically driven by apathy, protest or just plain ignorance, donkey voting is a dirty term synonymous with uneducated pot-heads reluctantly dragging themselves away from their Nintendo 64s to cast their unconsidered vote at the nearest church or primary school. It essentially means that you list your party preferences in the order they appear – like in a multiple-choice exam. When you're all out of reasonable options and facing a ballot sheet complete with as many as 50 tiny boxes and unfamiliar smiling faces – it might be a tempting option. However, the Donkey Vote, is the least productive method of voting without giving a shit. You're basically reverting back to a toddler-like state and proving that you can count. Don't do it.

Outside every voting station you'll find dozens of passionate volunteers for each major (and minor) party. This can be either incredibly annoying or super helpful. However, if you're shooting political blanks, it might be handy to use these people to your advantage – most are pretty knowledgeable and will be more than obliging when asked for an elevator pitch on their respective candidate.

If anything, it might help you clarify who not to vote for.

It might seem smack-over-the-head obvious, but so many of us are “rusted-on” voters – in that we proudly carry the voting traditions of our parents and their parents, with little understanding of what policies that party actually stands for.

I remember with alarming clarity the night we had our extended family over for dinner/drinks to watch the election results between John Howard and Mark Latham. I was ten years old at the time, and more focused on waging high-stake Pokemon battles on my gameboy. Now, please keep in mind that my family wasn't to know that Latham would later become a borderline-psychotic and hideously misogynistic columnist for Rupert Murdoch. But my family has always voted ALP and Howard's name carried Voldemort-like consequence when mentioned favourably. As such, I've always voted ALP too – until this year.

Now my vote's up for grabs.

There are so many factors to consider when voting in this election – and they don't have to revolve around our vast collection of pretty unlikeable candidates. For example, if you're a Queenslander and enjoy a cheeky trip to the local nudist beach, you might consider voting for the Australian Sex Party – who plan on introducing legislation to legalise nudist beaches in our Sunshine State.

If you appreciate your local parks, you might want to consider the Greens – who are passionately challenging the construction of additional highways and roads in place of family hang-outs.

If marriage equality is your vibe, you could consider a combination of Greens/Labor – each of whom have adopted an ASAP approach to the legalisation of same-sex marriage.

Basically, you're legally required to vote – so unless you have some spare cash lying around, there's no point in fighting it. Oh, and don't know what negative gearing is? Me neither. The good news is that you really don't have to give a flying merde about politics or our politicians to cast an informed vote this election day.

Give the Secular Party a go.

They believe in ending funding to religious bodies, for a number of reasons as they feel this funding could be better placed elsewhere, but also because many religions have oppressed women, the gay community etc.

They still believe in freedom for people to be religious, they just don't think our taxpayer money should fund it.

They aren't officially left or right, but you will find most of their policies are left wing in terms of social justice, support for gay marriage etc, support for public education etc.

As a woman I'm very impressed with them because I have always been left wing but am really concerned about how the left nowadays has really gotten into bed with Islam, I mean when did the left become the mouthpiece of the oppressors of women? I though the left was supposed to be about helping the oppressed. On the other hand the right wing has always tried to oppress us with their obsession with right wing Christianity.

So as a woman I was looking for a party that really cared about women's rights, and the Secular Party does.

You're legally required to have your name ticked off, not vote. You can literally get your papers and put them in the box blank.

I know, it's a pointless system. If you don't want want to vote you shouldn't have to turn up to a polling place not to vote at it.

This and the last couple of elections are particularly uninspiring for voters. If forced to vote we should at least be offered a significant choice. At the moment we have pretty much one choice, a Labor leader, Shorten or Turnbull, no genuine plan to recovery the economy and further escoriation of our own wealth wherever they can find it to pay too much for stuff we don't want.

I intend to write on my ballot paper something like, "None of you are worthy to lead" and wait for Trump to win in November which will matter more.

Well what stupidity. When peoples of other nations line up for days to cast a ballot you willingly and publicly declare that you'll forgo this privilege. There is zero Australians can do about the American presidency but a whole lot can be done here - especially voting on the Senate ballot. Donkey votes are for donkeys. Guess you are one.

I cant understand this, we don't want either leader, how does our vote help when one of them will get in?

It's true some women have referred to me as a donkey, but outside of that, I guess we differ on what is an act of stupidity. Is going to a polling booth, joining the line and waiting not to vote seems pointless and stupid to me.