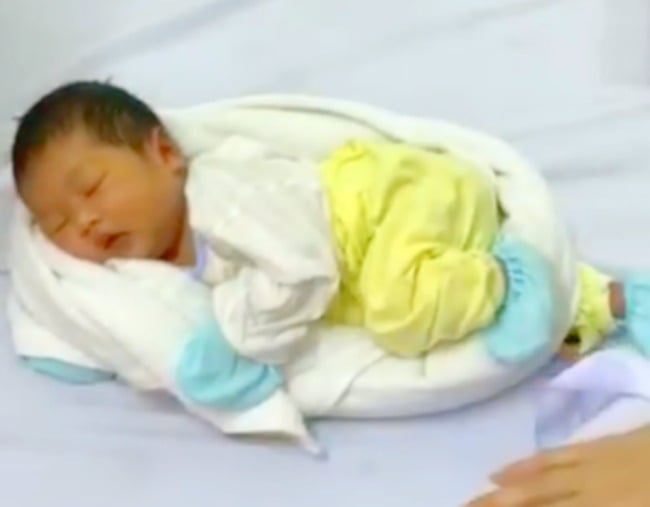 Every parent has been there; you bring a newborn baby home, and chaos ensues. It’s a chaos you could handle, were it not for your sleep-deprivation, raging hormones, your recovering body – oh and your life being turned upside down by the newest addition to your family.

So it’s understandable that new mums try every trick they can think of to get their babies to sleep, whether it’s been passed down by their mums, advised by friends, suggested by midwives – or that they’ve seen on the internet.

Which is exactly why a video of a nurse using a simple trick to put a newborn to sleep has gone viral.

Lê Thi Ánh, 23, from Vietnam, posted the video on her Facebook page earlier this year. Expressing her gratitude in Vietnamese, the young mother thanked the nurse at the hospital where she gave birth for teaching her the trick.

In the video, the nurse can be seen to roll a large towel diagonally, then place the baby on its side, using the thickest section of the rolled-up towel to support its back. The thinner ends then go around the infant’s body, underneath the baby’s head and neck, and a section is placed in-between the legs.

This Glorious Mess discuss the couple in the UK who might be evicted because of their noisy baby. Post continues after.

Speaking to smartparenting.com, the mum explained that the technique was common practice at the Thái Bình Obstetric Hospital.

“I am still using the method,” she added.

“It’s easy to do and helps the baby sleeps very well.”

However, in Australia, using supports such as pillows and positioners for sleeping, and side-sleeping, is not advised by most experts.

Red Nose – a leading Australian authority on safe sleeping practices and works to eradicate sudden and unexpected death in infancy – expressed concern about the video.

“Red Nose understands the needs of families, especially when it comes to babies’ and parents’ sleep. However, the chances of your baby dying suddenly and unexpectedly is greater if slept on their side or tummy.

Sleeping your baby on its back significantly reduces the risk of sudden and unexpected death in infancy (SUDI), which includes SIDS.

Red Nose doesn’t promote the use of positioners in bed, such as towels or wedges, for these reasons. This is also an increased suffocation risk due to airway obstruction if these objects become dislodged.

If your child has a rare or severe medical condition and needs to be slept on its side, be sure to discuss this with your medical practitioner. If they advise you to use another sleep position rather than on their back, make sure the reason is fully explained and that you ask for a written explanation.”

According to the Red Nose website, “annually, 3,200 Australian families experience the sudden and unexpected death of a baby or child.”

With such alarming statistics, it’s imperative that any parent considering this technique inform themselves of the risks.

You can see the sleep technique video below, or here.