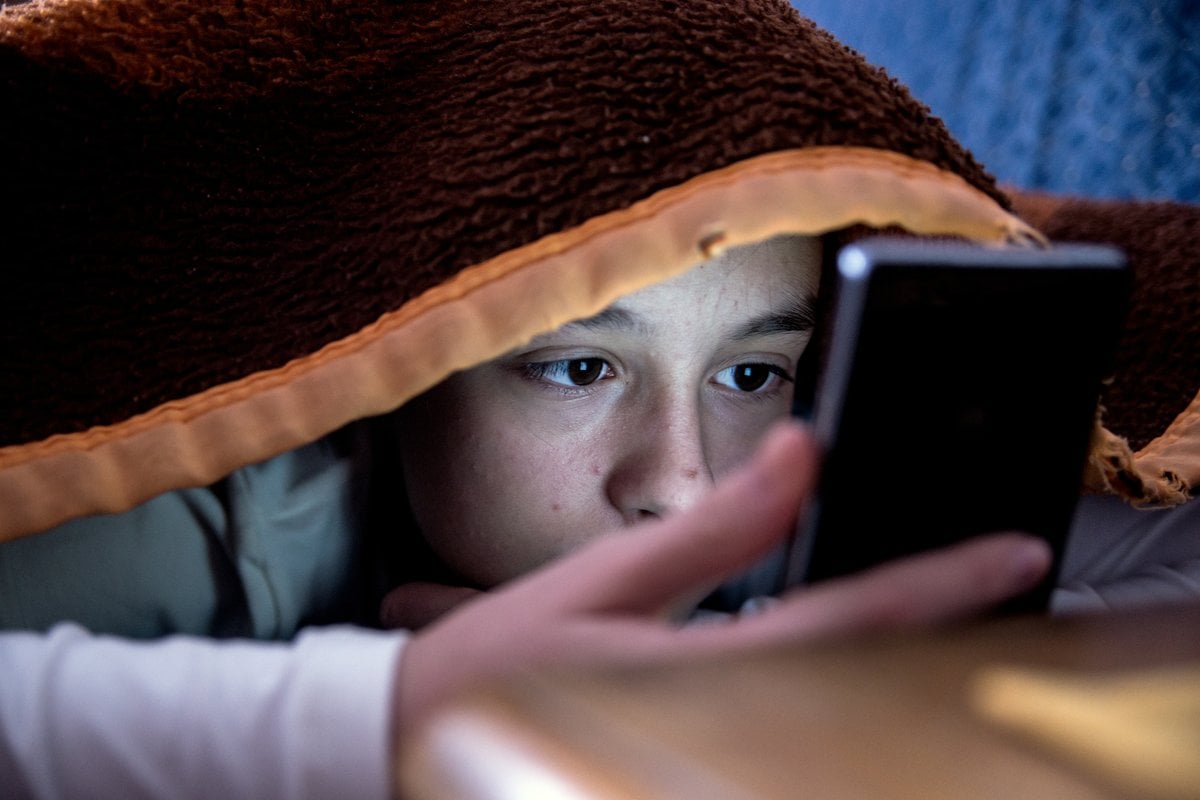 I love my two girls. With every fibre of my being.

I would walk to the end of the earth if it meant that they were healthy, safe and loved.

I’m sure I’m not the only parent who feels like this.

But what if you couldn’t guarantee their safety?

What if you couldn’t guarantee that kiss on the forehead as they walked through the school gate wouldn’t be the last?

What if the biggest threat to their beautiful lives was themselves?

High school is all about five-minute moments. Post continues below.

My daughter’s friend Chloe* is this threat. She lives with it every day. She walks into the classroom with her head down for fear of what other kids may read on her face.

My daughter’s beautiful friend is nine. And she’s being bullied online.

At just nine years old, I can’t even fathom how her young brain is managing to wrestle with such mature emotions.

Chloe, at just nine, is already wishing her life was over, long before it has even started. She’s telling her friends that she is going to kill herself. She is telling her mum that she hates her life and wants to go to heaven.

I never imagined that I would have to sit my own daughter down and talk to her about the importance of living after Chloe told her that she wanted to die. I had to plead with my daughter to always come to me and talk, that no hole is too deep or too wide for us to dig out of together. She had no idea what any of this meant or how to process it all. She thought the hole was literal, not metaphorical.

Many of us born before the invention of social media can recall what it was like being picked on at school. The teasing would happen in the playground, and you would want the concrete to swallow you up. But then home time came and you could feel the breath that you had been holding escape your lungs as you stepped into your safe, warm bubble at home.

But not today, not for our kids. Advancements in technology have allowed the teasing, bullying, and even death threats, to come home with them.

Chat functionalities in online games like Roblox and messaging apps such as Kids Messenger means that at any time, kids can be sending and receiving nasty words, images and videos. It never ends. They simply cannot escape the torment of their bullies.

According to a recent study by Headspace, one in two young people have experienced cyberbullying. This is a statistic that has remained unchanged since 2018. For three years, there has been no change in the occurrence of online bullying among our kids.

I first met Chloe a few days after my daughter started at her school. She was polite, made eye contact with me when she said hello and smiled big as they walked into the school gate together.

I first met Chloe’s mum at my daughter’s birthday party after she rushed over expressing what felt like an overabundance of gratitude for inviting her daughter to the party. It wasn’t until we got talking that I understood why that day was such a big deal – Chloe had never been invited to a child’s birthday party. Not once.

She had been told that she was 'too fat' to be invited to a pool party. And too slow for laser tag. Another child didn't invite her to a birthday party because 'I don’t like you and you should kill yourself'.

And these weren’t just face-to-face comments. They were also typed up by kids in their bedrooms, adorned with fluffy rugs and twinkle lights, and sent via their iPads.

All I could muster up in response was: 'What the actual f**k?'

'She has told me multiple times that she wants to end her own life. That she just wants it to stop. She has said it to kids at school. I have no idea what to do about it,' her mother told me pleadingly.

There are many parents out there who will question iPads in bedrooms and laptops on desks, but these are staples in most children’s bedrooms these days thanks to the COVID-19 pandemic. And if they’re not in their rooms, they’re in rumpus rooms, home offices, or literally sitting on the lounge for use at any time.

Many parents will also question why these bullies have access to Chloe via online games and messaging apps. However, it’s important to remember that kids want to be connected and they want to be where everyone else is. Chloe has friends, and they are using these online portals to chat.

The fact of the matter is, Chloe should be able to be online like everyone else without constantly being tormented. She has a right to live free from prejudice and to feel safe and free from thoughts of suicide, no matter what environment she is in.

Listen to Mamamia's No Filter below. On this episode, host Mia Freedman chats to Dr Ginni Mansberg and clinical psychologist Jo Lamble about the hectic lives of teenagers. Post continues below.

Just like Dolly Everett. And Jessica Cleland. And Libby Bell. And every other child and teen that took their own life because the online torment became too much.

Chloe and her mum have spoken to the school a number of times and the perpetrators have been reprimanded. But then they create new profiles and load new pictures. The onslaught simply continues.

I’ve completed an online safety course to better understand ways to protect my own daughter online, and I knew what Chloe’s mum needed to do. She had to gather evidence. ALL OF IT.

From online conversations to screenshots from games, anything Chloe has been sent needs to be saved.

Schools will always do their due diligence and investigate any reports of bullying, but without solid evidence, it can be tricky for them to do much more than reprimand the accused, speak to their caregivers, and set the victim up with coping strategies through the school counsellor.

Education is key and not just for the bullies, but for the victims, their parents, and the school and community as well. Schools need to implement online safety education as part of their everyday classroom lessons. Parents need to educate themselves in online safety, just like I did through Safe on Social.

Cyberbullying is one of the biggest concerns I have heard from other parents and it’s not going to stop until we educate ourselves and our children.

Chloe is seeing a professional to talk through the way she is feeling and her mum is busy collecting evidence to present to the school and local police.

Every day that my daughter tells me that Chloe wasn’t at school, I get a lump in my throat. The questions swirl in my head. Where was she? Is she okay?

I can only imagine what her mum feels every single day, wondering if today is going to be the last.

So educate yourself and educate your kids. Another child does not need to take their life because of cyberbullying.

*Name has been changed to protect the child’s identity.

Reply
Upvote
1 upvotes
I get so frustrated with the way education around bullying is taught. There is such an emphasis on the victim. Nobody stops to educate parents and, most of all, children and teens, about not being a bully.
In my job we do compulsory bullying and harassment training every year. It covers what is bullying and also what is victimisation. Victimisation is what kids fear if they speak out.  In a workplace, it's not tolerated. Why should it be any different for our kids?
I just really wish the schools would educate around what is bullying and how not to be one as well as victim support.
C
cat 5 months ago

Reply
Upvote
1 upvotes
@shelly7011  I think kids are very clear on what bullying is & when they are doing it, the same way adults are. The difference is that  adults have more agency to avoid situations they don't like, whereas kids are trapped in their school environment.
We all know that bullying occurs in almost every situation where adults are forced to be around one another, from families to workplaces (no matter how much training there is), to every PTA or local sports club or other organisation. You can turn on TV and see politicians literally bullying each other in parliament.
News
General
Opinion
True Crime
Politics
Sport
Explainer
Entertainment
Celebrity
Reality TV
Movies
TV
Books
Rogue
Royal
Lifestyle
Beauty
Fashion
Weddings
Home
Wellness
Health
Fitness
Travel
Food
Parents
Before The Bump
Pregnancy
Baby
Kids
Teens
School
Parent Opinion
Work & Money
Money
Finance
Career
Lady Startup
Relationships
Sex
Dating
Separation
Friendship
Family
Real Life
Couples