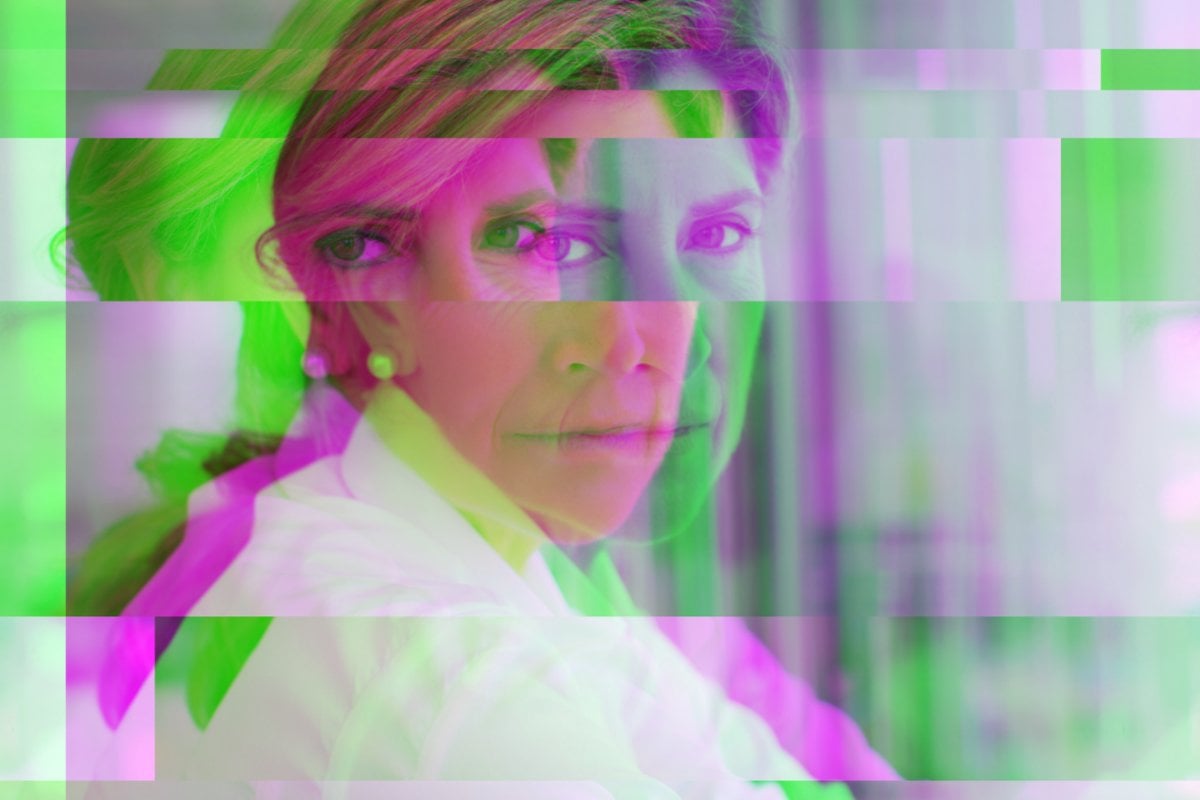 There’s a unique kind of feeling a woman experiences when her relationship ends at 38. With the usual grief comes a cocktail of something akin to four parts panic and two parts determined (and strategic) hopefulness.

If I meet a new partner by 40, I mused, I might still be able to have a baby.

That’s, of course, assuming one has any control over when they fall in love. And assuming I fell in love with a man. And assuming he, in or near his 40s, would want to have a baby when he’d likely already had at least two kids…

Nevertheless, my strategic timeline helped me from succumbing to the panic.

Even when my friends, who’d gotten divorced at the same time my relationship ended, found new husbands within six months of their breakups and squeezed out one more — and sometimes two more — kids before the age of 41. Even when I hit 39 and a half and still had not found someone I would actually want to have a kid with.

And then… I don’t know how to explain what happened. I can’t say that I don’t want to be a mum anymore. Or that I made a decision about motherhood, one way or another.

I think, at 43, I stopped being so certain that I wanted to have my own baby. I wasn’t sure I wanted to go through a pregnancy in this phase of my life. I am not against it… but I also wouldn’t purposefully pursue it.

The summer of my 44th birthday, I found myself seriously considering adoption. I remember having a really long conversation about it with my brother and his wife during our camping trip. And yet, there was an undercurrent of apathy there. I came back to the same conclusion I’ve always had: I do not want to be a mum by myself.

I wanted a partner with whom to take that journey.

In the absence of that, the idea of motherhood doesn’t feel so right to me.

So somewhere in the past six months, it feels like I’ve let go of that dream.

I mean, sure, anything could happen. I suppose I could meet someone in the next year and decide I want to get pregnant and find out that it’s not so hard for this woman who once got knocked up while on birth control. Or maybe (more likely) we would adopt.

But… none of that feels real to me, anymore.

My 45th birthday is this summer and I find myself thinking of motherhood less and less. When I look into the future, I don’t see myself with kids, anymore.

There was no revelatory moment during which this happened. I couldn’t even identify the first time this vision entered my consciousness.

On the contrary, I feel like I was holding a balloon by a string and, somehow, I lost hold of the string and the wind tugged the balloon up into the sky.

I’m watching it disappear into the clouds now, with a deep sense of detachment and confusion. Did that just happen? Why had I been holding that balloon in the first place?

Do I feel sad that it’s gone? Am I supposed to feel sad?

I always hated going to the movies. That seems a strange thing to say for someone who loves cinema as much as I do, and who wanted to be a director someday.

But notice I said going to — not watching.

The cinematic experience always left me with such a feeling of let-down and abysmal disappointment in life.

For example, after watching The Fellowship of the Ring, and witnessing these humble characters set off on a life-threatening journey in order to save Middle Earth from the worst evil in the world, my heart was pounding with the drama of it all, the inspiration I drew from that courage, the desire to set my own course toward something even half as meaningful…

And then I walked out of the theatre, into the garish light of day, only to face hundreds of people going into and out of the shops in the shopping centre. Women in their twenties walking by with pink bags dangling from their 2-inch nails, older men looking bored while they waited outside for their wives, teenagers spitting milkshake at each other and laughing hysterically.

Every time I walk out of a theatre, I feel despair at these sights that greet me. This is it? This is life?

I want to do something important. Meaningful. I want to take the ring to Mt. Doom and destroy it.

I don’t want this. Picking up some stupid candles. Endlessly trying to keep myself sexy for a male partner. Saving up my money to buy a $100,000 SUV like the ones in the parking lot outside the movie theatre.

None of those things are wrong. (Hell, I love a good candle.) But is this all there is to life?

For a long time, I thought there were at least two routes I could take to make my life feel meaningful: motherhood and writing.

Granted, the latter would require me writing something of great social importance. Something Pulitzer-worthy. (Which is still, I confess, my dream.) So you know… that might not happen.

But becoming a mother… Of course that would happen. It was a given.

I only knew a handful of older female relatives who never got married or had kids. Nobody ever talked about them, except to utter things like, “She was always a strange one…” The implication was that something was wrong with them. Their singleness, their childlessness was an anomaly.

Everyone else had kids. There’s no way it wouldn’t happen.

That was my ring. My quest. My hero’s journey.

I’d have kids one day, and finally, my life would feel meaningful. Finally, I’d be doing something worthwhile.

These past six months are the first time in my entire life that I’ve begun making peace with the reality that I will likely not become a mother.

I’m okay with that. Sometimes.

But I find myself asking the question: What now?

I don’t have the noble quest of motherhood to make my life meaningful. And indeed, our culture is savage with women, insisting that we can’t make our lives meaningful outside of motherhood.

I don’t believe that. There are plenty of childless women who have made an impact on the world, throughout history.

But like all humans, I need a quest. I need a purpose. I want my life to matter. I want to leave this world a better place than it was when I arrived.

Of course, the mind wanders to grandiose visions of travel and high-powered jobs — things that might not be accessible to the average, middle-aged, childless woman.

Why is this, I wonder? Why is that where the mind goes? Do I need to literally trudge my way through the Dead Marshes and sneak myself into Mordor in order to feel like I’m doing something worthwhile with my life? Especially in light of coming to terms with my identity as a childless woman?

What makes a meaningful life? Is there some metric out there that we’re supposed to meet? (It would certainly seem so.) Or do we get to decide for ourselves?

Does coming to know ourselves count as meaningful? Expressing ourselves? Learning how to be better people? Creating beautiful things?

As I inch toward 45, and take in the knowledge that the likelihood of becoming a mother is almost nonexistent at this point in life, I realise I do not have a plan. I never had a plan. I always thought I would become a mother.

In the absence of my “Plan B” (what a dreadfully ironic term), I find myself with another interesting emotional cocktail. Yes, the grief is there. The panic.

And in some ways, a little excitement. I mean… I could do anything I wanted. I literally have no strings -which is both a deeply freeing and heart-stoppingly panicky feeling.

Maybe I will journey deeper into film and make the documentaries I always dreamed of making. Maybe I will start to build a portrait practice, as I have longed to do for so many years. Maybe I will write that Pulitzer-worthy novel. (Count on it.)

I suppose I might never have a plan, and maybe that’s okay. Because the truth is — as we hate to think about — one day, we will be forgotten, whether we have kids or not. We were meant to leave a mark on those we lived beside, and if we’re lucky, a generation or two beyond. Other than that, human lives were meant to be fleeting and forgotten.

I won’t be making the trek across Middle Earth. I live here, on regular, ordinary, mundane Earth where I must try to make meaning out of a world filled with GAPs and Goops and bored husbands waiting on footpaths.

Meaning out of a world in which I will never know myself as “Mum.”

And that is all there is.

Yael Wolfe is a writer, artist, and photographer whose work explores relationships, gender equality, and spirituality. She is passionate about female sexual empowerment and won’t stop howling until all women have achieved it. You can find her on Instagram and Twitter.

Reply
Upvote
I hear you, I don't have children either at age 39.  I am educated and didn't believe in bringing a child into this world without someone to play with so a must have 2, and that would be even more money needed and security first.  Plus, I too wanted to do this with someone.  Not just have "fun" first, then figure it out as it comes.  The world doesn't work that way anymore.  It's soooo expensive to live even half the quality of life that was once had back in the 1960's or earlier.  And kids need even more education to be successful that ever before also.  It's like our generation got caught in this whirlwind of change of prices going up, qualification for jobs becoming ever more complicated and we got lost in the middle of it.  I see many more men and woman, because I'm a man and want to include men in this too not having children and realizing with each day we are older and older.  I think the "fun" of having children without having to plan so hard to get them and raise them in a quality way has been gone since the 1980's left.  That's the last time I remember mom's talking with excitement about their raising their children and the last time raising a family was a bit less stressful and just more living in the actual joy of life.  Life has become way too complicated!  So to say I love your story and it brings me some peace about my life and not having children.  Thank you!