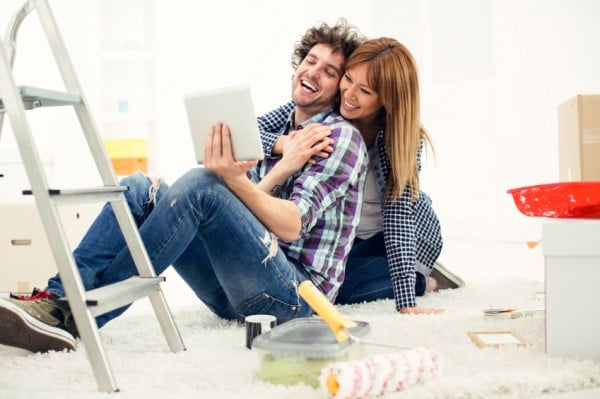 Inexplicably, some years ago, we decided to sell our new(ish) house and purchase a 50 year old  “renovator’s delight”.

It was the quintessential “worst house in best street”. The market was high, we were starting to panic and all five of us (including a teething 6-month-old baby) were bunking with our in-laws. It’s fair to say I wasn’t exactly thinking straight.

That’s not to say I didn’t do my research. I dragged 3 children through countless homes in 35 degree heat with no air-conditioning in the car, and I had inspected house after house after shitting house, yet all of them felt, somehow, wrong. I was running out of patience and, to be honest, the will to live.

That’s the only feasible reason why we purchased what we eventually dubbed ‘The Money Pit’.

It was a deceased estate, and Hazel - the 80-year-old former owner - had lived a good life of orange shagpile carpet, lead-based paint, cleverly concealed shower leaks. She'd then carked it in the house somewhere.

I wholeheartedly believe she was still in that house, roaming around being a pain in our collective arses, until the day we sold it.

When I originally inspected this house I immediately wrote it off, despite it's close proximity to the water. It was too small and needed too much work. The my husband sold me a dream viewed through his eyes - renovator's eyes.

It would be easy to rip up the shagpile, put down some timber floors, re-do the only bathroom, build another level up, put in a pool.

We redesigned that baby in our heads within 15 minutes. So what if the built-ins weren’t even big enough for my clothes, let alone his? One toilet? Pffft, I was married to a plumber - he could easily just whack in another one.

We made them offer 30 minutes later, then slept uncomfortably all night, doing our best impression of a prayer, hoping old Hazel's crazy kids said yes. They counter offered and before you knew it we were the proud owners of the hardest house on earth to renovate. Well done, Morleys.

Our intention was to renovate and flip that thing within a year. Our reality? We were still living in a half-finished home with an asbestos roof and one toilet between five people four years later.

So, here are a few tips from someone who has renovated, (barely) survived it and will never, I repeat NEVER, renovate again:

Never ever, ever, ever, ever, buy a house with only one toilet. I don’t care who you are, how many people are in your family, one toilet is not adequate. Sure, I’m married to a plumber, but that doesn’t mean he can throw in a second toilet anywhere, especially where there is no basic infrastructure.

There was a constant line up for that toilet and more than once, emergency provisions had to be mocked up in the back yard. I am not talking about number ones here.

Just forget it. There will be no Desperate Housewives scenario with a hot guy who wants to have his way with you on the freshly laid tiles. Reality: He will be an old, fat, hairy guy who turns up too early and cops an eyeful of you in your pyjamas minus support bra.

No, you are not a plasterer. No, you are not a plumber and no, you are most certainly not an electrician. You also do not know how to kill termites yourself (as evidenced when my husband almost set the house on fire by trying to blow torch them in combination with bug spray). Just, call the exterminator. Or you’ll be calling the fire brigade.

After all, it's not as easy as they make out in Better Homes and Gardens:

Video via Better Homes and Gardens

Tip 4: The kitchen is your most important room.

You know what? I seriously think my husband and I sat down and smoked a giant spliff the day we bought that house. It is the only reason why we didn’t see how useless the kitchen would be for a family of 5. Or a family of 1 for that matter.

Not only was it tiny, there was zero bench or cupboard space. It was also falling apart around us at an alarming rate.

Tip 5. Borrow more money than you think you need.

Seriously. Whatever you think it’s going to cost you, just double it. We had big, massive and unrealistic ideas about what we would do with our place. Then we got a few quotes. Even though we were lucky enough to do a fair bit ourselves, the compounding costs just blew us out of the water.

Tip 6. Get used to going to bed shitty with one another.

Our worst renovating day was the "white on white" day. Let me explain. We had both agreed upon the roof colour and the outside wall render colour. We tested them against each other and were pleased with our choices. So the day we both arrived home from work at the same time and found that we now lived in a Greek Palace (ie white on white), instead of getting stuck into the painters, we both got ridiculously angry at one another.

This was just compounded by the fact we had received a bill for the addition, which was double what we had been quoted, and I was pretty sick of playing toilet roulette (or it was genuine asbestos poisoning).

Every minor issue you have will be magnified and, because there’s no one else to take it out on, you turn on each other. They say that buying a house is one of the most stressful things you’ll ever do. They’re wrong. Renovating it is.

Tip 7. Don't make friends with the people in your street.

... nless you want to get sidetracked and never leave. Initially we meant to walk in, renovate the place and be gone a year later. Flip it and do it all over again. That was the plan.

There were factors that stopped us of course - sicknesses, deaths, diagnosis of behaviours etc etc, but to be honest it was the street. We stopped renovating and started socialising and loving our neighbours. The days of wallpaper removal got replaced with days of indoor cricket and pool parties. And it wasn't the worst thing.

So there you have it, just a few tips on how to successfully avoid being a shit renovator. Have any of your own?

Do you suffer from renophobia. SO many of us do…

16 Things I No Longer Care About.

Can you reinvent yourself halfway through life? Of course.