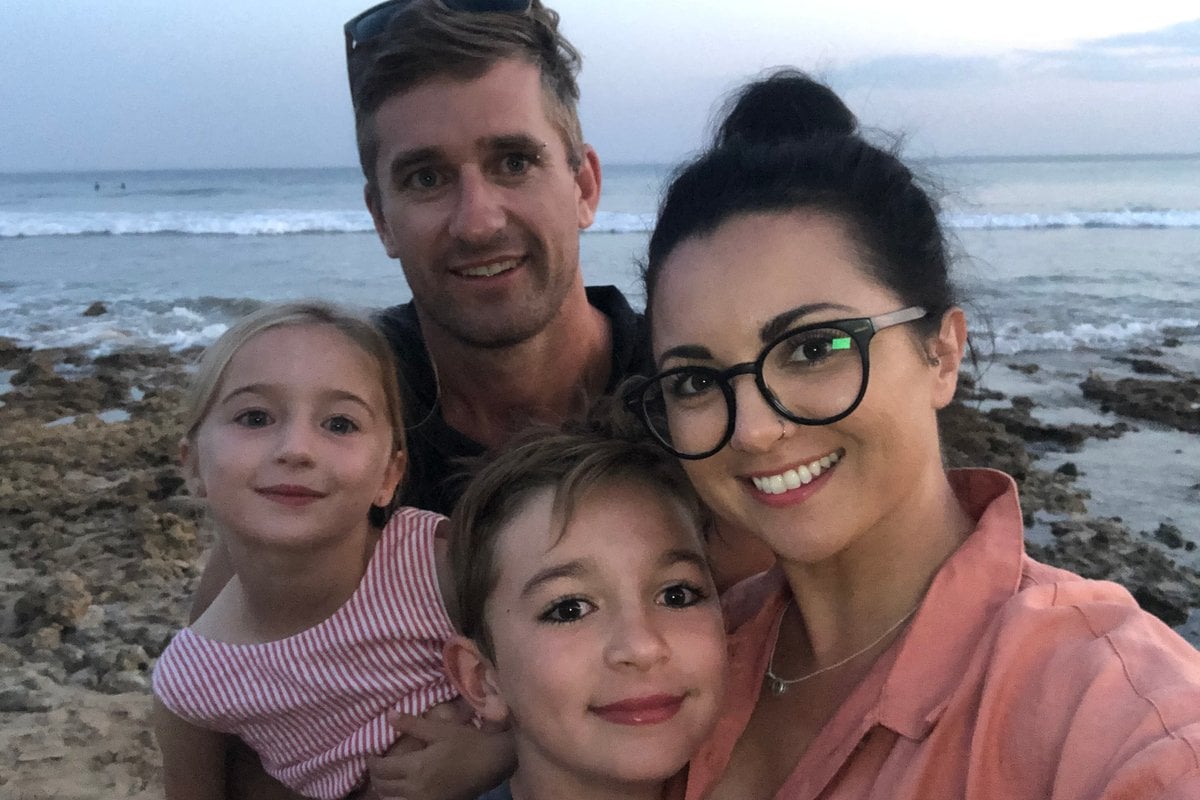 We were in lockdown, so I was home with the kids while my husband Andrew was still working (his role was classed as essential).

We all got up and had breakfast together like we always did. As the kids got ready to start their online learning, Andrew was getting ready to head off to work. He gave us all a kiss and a hug and said goodbyes with an ‘I love you’ from the kids echoing as he headed out the door.

The day was just a standard day in lockdown. The kids finished their homeschooling and we played outside in the sun. Andrew would always text and call during the day, and on this day he called and said he would be home at 4pm for us to do a workout together.

He got home, gave the kids and I a kiss and a cuddle, had a chat with the kids then changed into his gym gear.

We went out and did a solid 45 minute session. - he said he felt good for doing it.

We came inside and the kids were all over Andrew. He went and jumped on the trampoline with our son Taj, who was 10, then played inside with our daughter Zali, who was 7.

During lockdowns he would come home and take the kids to give me a break, so I would cook dinner to have some time out.

We ate dinner together, he cleaned up and then got the kids ready for a bath. Once the kids were in bed, we had a nightly routine where we would have a cup of tea and some chocolate and chat about our day. I always had to take the chocolate away from him as he had the biggest sweet tooth! 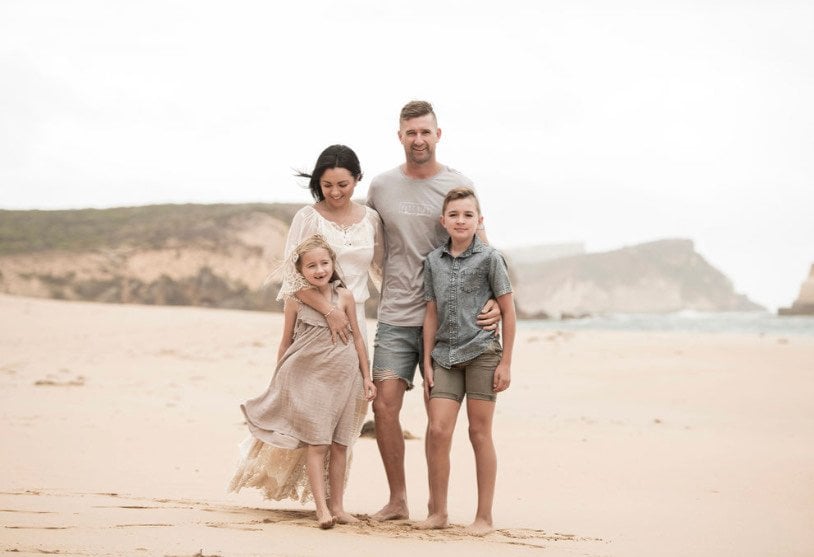 We sat up and paid bills together before getting ready to go to bed. I headed off for a shower, where he would always come in and chat.

After showers, we were in our room and I had my back to him. I said something but there was no reply, and I turned around to see all the colour start to drain from his face. He turned grey very quickly.

He started to collapse so I had to help him down and I laid him on the floor so he didn’t hit his head.

I thought he had fainted as he had fainted only a month before. I started tapping him on the face saying, ‘come on, wake up Andrew,’ and getting the face washer to put on his forehead which is what I had done the last time. But the last time he was only out for 30 seconds, and this time it was different. He looked different.

I noticed he was barely breathing and his pulse was really light. His eyes were open but glazed. I went into shock and panic, I could barely speak.

I remember scrambling for my phone and calling our friend who lived around the corner. He was there in a split second and on the phone with the ambulance. She asked him questions about Andrew's breathing and pulse and then instructed him to start performing CPR until the paramedics got there.

I ran down to the kids because I wanted to make sure they stayed asleep, so closed their doors and all the doors to the front of the house. Our kids are very light sleepers so I was expecting to see them, but somehow, they slept through the whole night.

I know he was helping them to stay asleep that night.

Paramedics arrived fairly quickly and they moved him from our room to the larger room across from ours. I had to wait outside, and they would come out and tell me what was going on. They weren't taking him to hospital because they were giving him everything they would at hospital here, and they wanted to keep him comfortable.

They worked on him for an hour, before telling me he wasn't responding. They asked me what I wanted them to do and I said they just had to keep trying, so they did.

I have the sound on that flatline machine seared into my brain because I could hear it every time they tried to jump start his heart.

After another 25 minutes, a paramedic looked at me and said 'I'm so sorry. He's passed away.'

Those are words you never think you will hear about your 35-year-old husband. How could someone so young, fit and healthy just die like that? 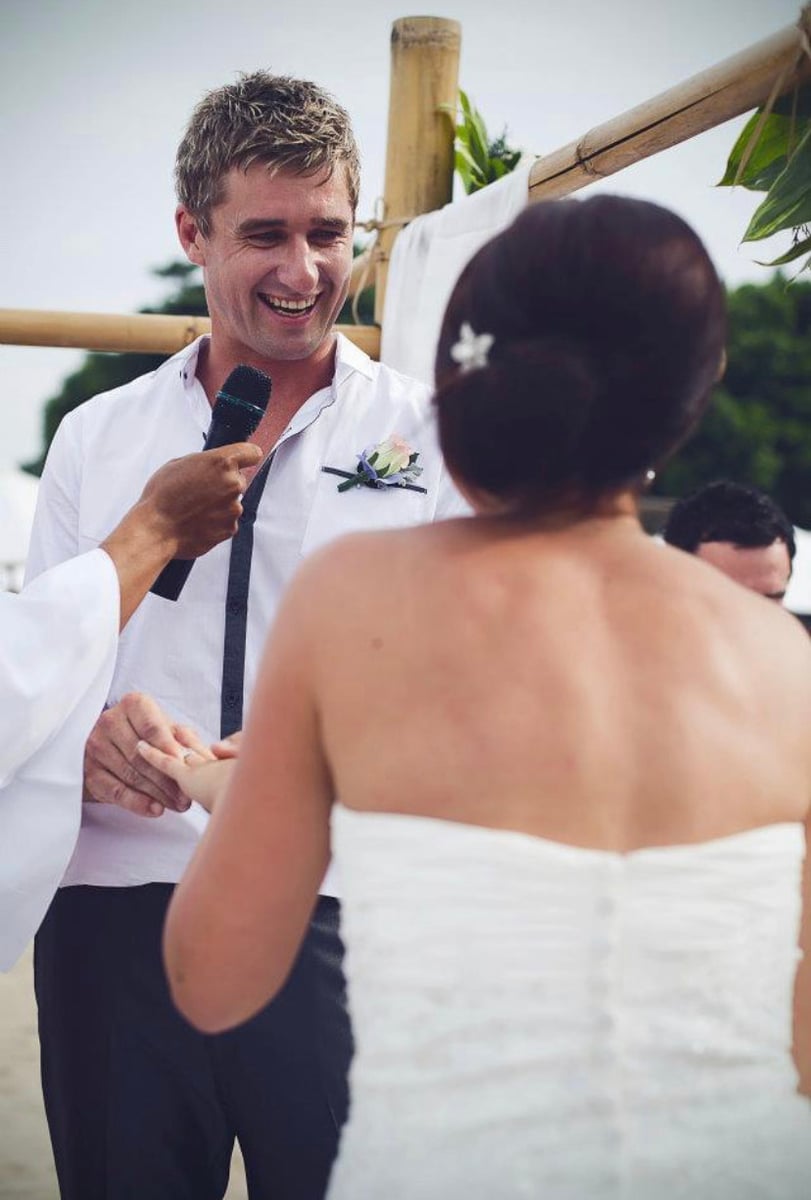 I remember after I heard the news, my legs crumbled from underneath me and I collapsed on the ground with my parents around me, uncontrollably crying and screaming ‘what the actual f**k’, ‘this can’t be happening’, this is all a dream’, ‘someone wake me up PLEASE’.

I managed to walk into the room where he was and sit with him, where I cried and cried and cried. I talked to him, I looked at him, I hugged him and just laid there next to him for as long as I possibly could.

I was asked many questions after this and the only one I remember is: ‘would you like an autopsy completed?’ My answer was yes - I needed to know why, how, what it was that took my husband's life.

It was well after 1am once all the paramedics and police had left. I went inside with my mum and dad and knew what was next: telling my children that their dad was no longer with us. How do you tell two kids who went to sleep with kisses and cuddles from their dad that they'll never see him again? I didn’t wake them, I wanted them to sleep. So I sat until morning, just staring at their bedroom doors, wondering how I was going to do this.

After what felt like a lifetime, the autopsy results came back. Andrew's cause of death was arrhythmogenic ventricular cardiomyopathy, more commonly known as AVC. AVC is a rare heart disease that can lead to sudden cardiac death.

Andrew didn’t know he had this rare disease - which they call a silent killer, because it has no ‘real’ symptoms other than fainting, dizziness and fatigue. After he had his first fainting episode, we went to the doctor and he had all the relevant testing done, including an ECG, Holter monitor, an EEG, and so on. He was deemed healthy, and the only other test he could have had was an ultrasound on his heart, which would have shown that he had AVC.

Andrew’s older brother Dale has AVC. His was detected before it took Andrew's life. Dale’s heart rate was so high that when he drove himself to the hospital doctors were shocked he was still alive, so he now lives with a defibrillator in his chest to keep him alive.

They say AVC can be genetic. Dale has three children and I have two who all now have a 50 per cent chance of having this disease. But the specialists say there's simply not enough information currently available on this disease, and it leaves a lot of questions. So I knew something needed to be done.

Andrew and I had always wanted to create a clothing label, own our own business. Once everything had settled a little, I wanted to do something to take my mind off my own grief and help the heart foundation.

I've created AVC The Label in honour of Andrew to keep his legacy alive and to raise much-needed funds to get more information, and potential cures, for this heart disease.

That's why 10 per cent of all sales from my apparel will go towards the National Heart Foundation of Australia.

I have hoodies, tees, caps, wrist bands and more for men, women and children.

We have fundraising activities coming up and are involved in MyMarathon with the National Heart Foundation of Australia in October, which we are very excited about.

You can check out AVC The Label to keep up to date with what we're doing to fight the silent killer that took my husband.

For more from Rebecca Barry, you can follow her Instagram here, or AVC The Label here. You can also check out the AVC The Label website.

E
enndee93 a year ago

Reply
Upvote
1 upvotes
I'm truly sorry for your loss. I have 3 young children and I wouldn't have the slightest clue about what to do if this happened to me. I'm so proud to hear you've created some good out of this tragedy
J
jo1703 a year ago