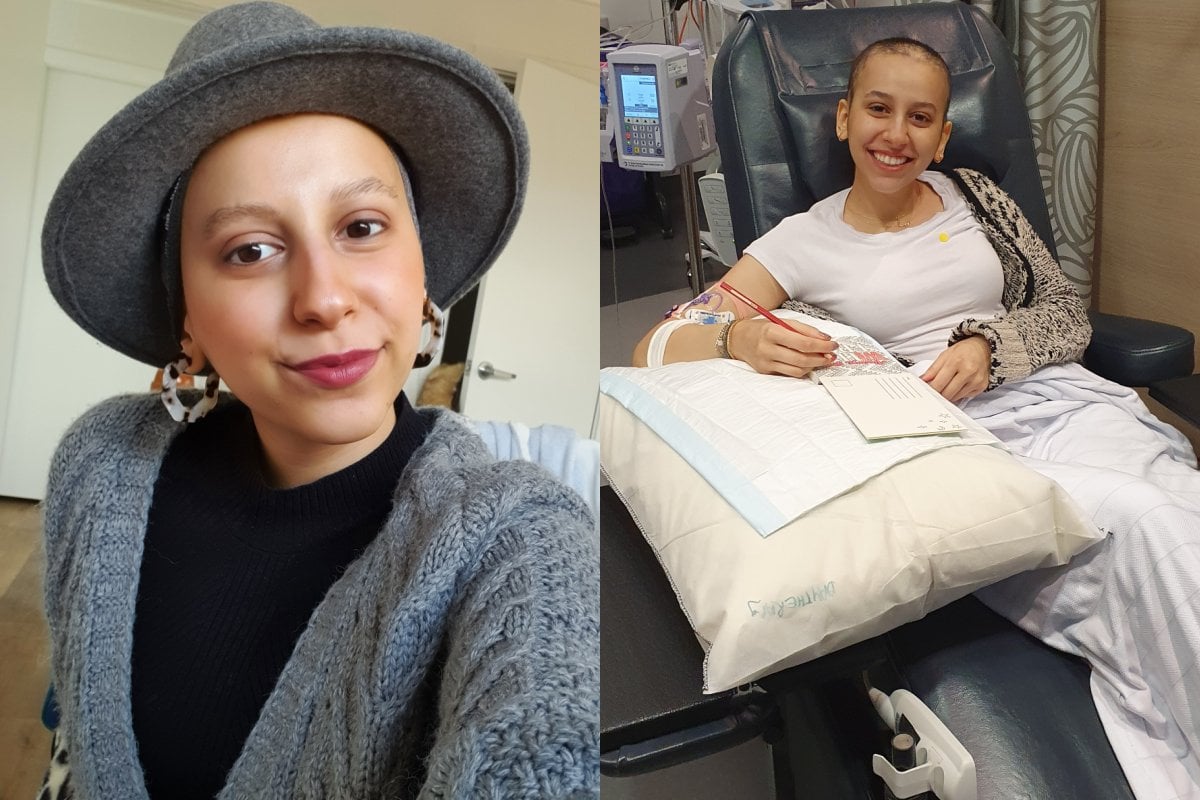 Lea Chaybane is an international student from Lebanon. She's been living in Sydney for the past four years studying for her bachelor's degree in science, followed by a master's in teaching.

In February 2020, a month before the world changed for the better part of two years, her own life changed dramatically: Lea was diagnosed with stage four Hodgkin's lymphoma. She was 21.

"Before being diagnosed, I was having fevers almost every day for three weeks," Lea previously told Mamamia.

"I went to the GP and we tried going on antibiotics first because everything was okay - I didn't have a sore throat. But every day in the afternoon, I'd spike in temperature," she explained.

After going for a blood test, the GP sent Lea to the hospital for a PET scan which confirmed cancer. It was advanced and had spread to her liver, spleen, lungs, neck and bones.

"I think that was the scariest part because I wasn't expecting it," she said.

"Because it was stage four Hodgkin's lymphoma, I just wanted to move quickly," she said. 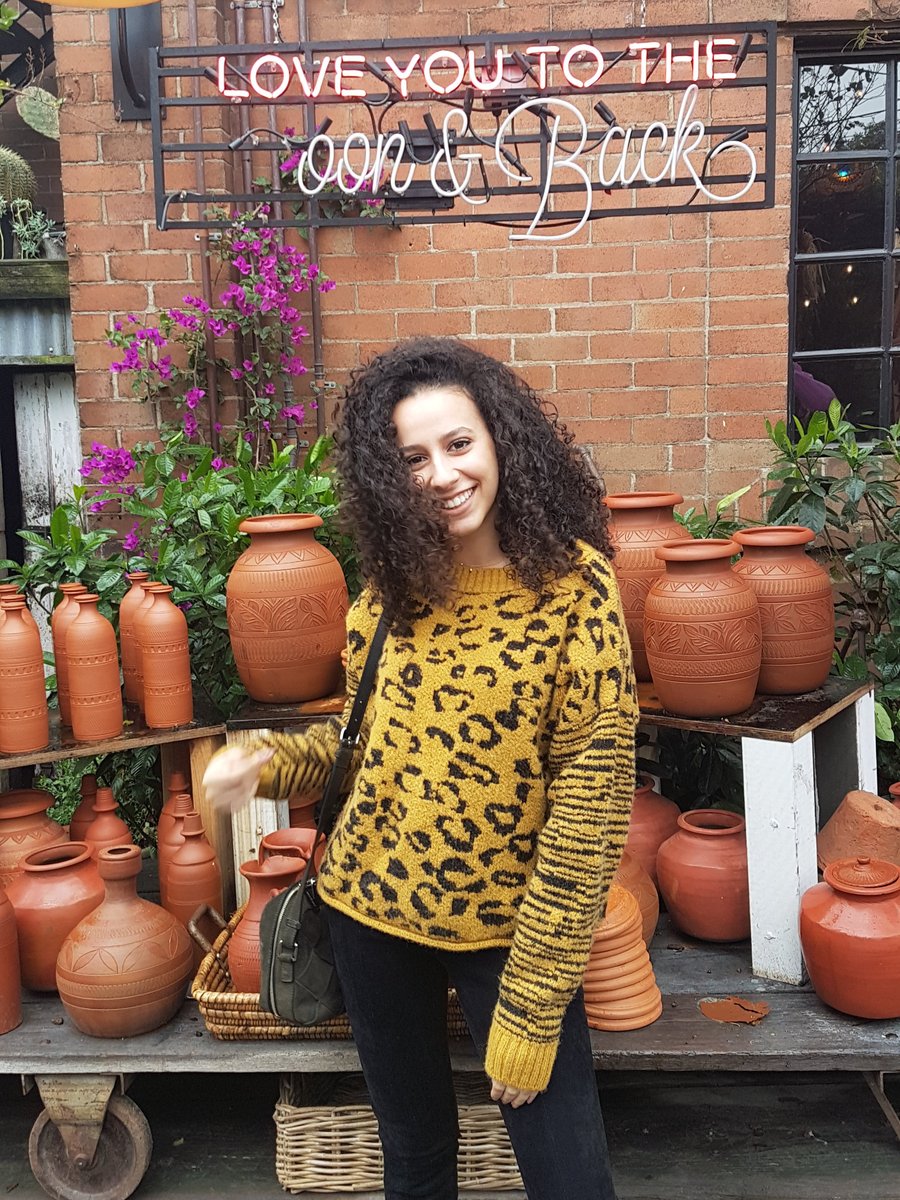 Lea went through six rounds of chemotherapy, and each round would go for three weeks.

During those three weeks, she'd spend four days getting chemotherapy through an IV and eight days taking it through a tablet, resting her body in between.

During a typical day getting IV chemotherapy at the hospital, Lea woke up between 7.30 and 8am. First, she'd check her temperature and take her medication. Then, it was time for breakfast.

As Lea was immunocompromised, she couldn't risk bacteria in food potentially giving her food poisoning. And therefore, she would cook most of her own meals. On chemotherapy days, she stuck to pretty bland foods.

"I knew that chemotherapy would make me very nauseous and my body would be wrecked after the session. So, I had to take that into consideration. I'd usually have something plain like bread with cheese," she told Mamamia.

After breakfast, Lea would get ready and head into the hospital for her appointment between 9.30 and 10am. 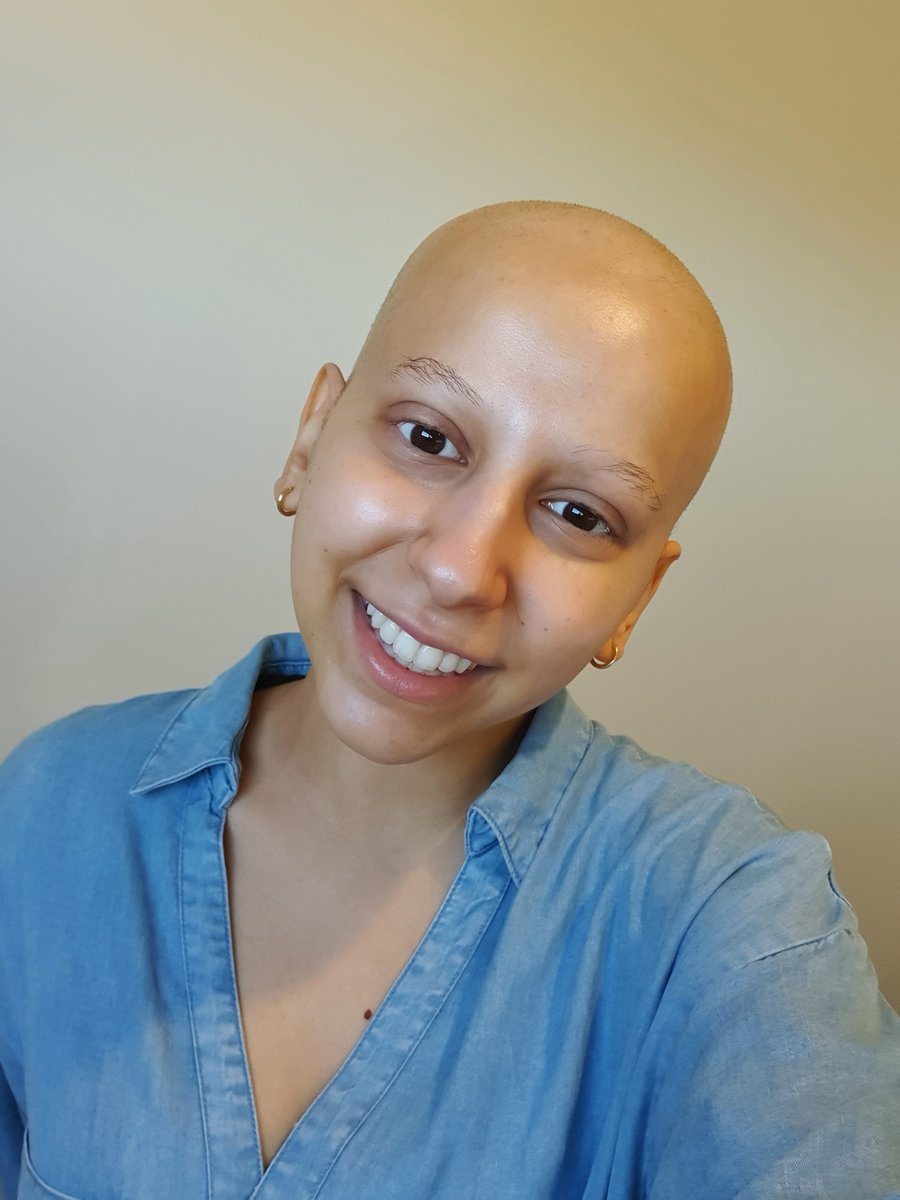 Two weeks into chemotherapy treatment, Lea started losing her hair. So, she shaved it off. Image: Supplied.

As Lea was getting treatment soon after the pandemic began, there were new rules implemented to keep patients, visitors, and staff safe from the virus. For example, when she arrived at the hospital, they would take her temperature before she was allowed inside.

Once that was sorted, she would go upstairs, get a blood test and wait for the results for an hour before starting chemotherapy treatment.

"They would see that everything is normal, my body has recovered after the last cycle, and then it's ready for new chemotherapy," she said.

Despite stage four cancer and going through chemotherapy, Lea continued studying for her Master of Teaching.

"I was doing one unit," she said. "I felt it was better than not doing uni at all. It worked better for me to get my mind off cancer."

While getting her treatment, Lea would either study, scroll through her phone, draw in her colouring book or mostly, sleep.

"It was kind of the only way not to think about it," she said. 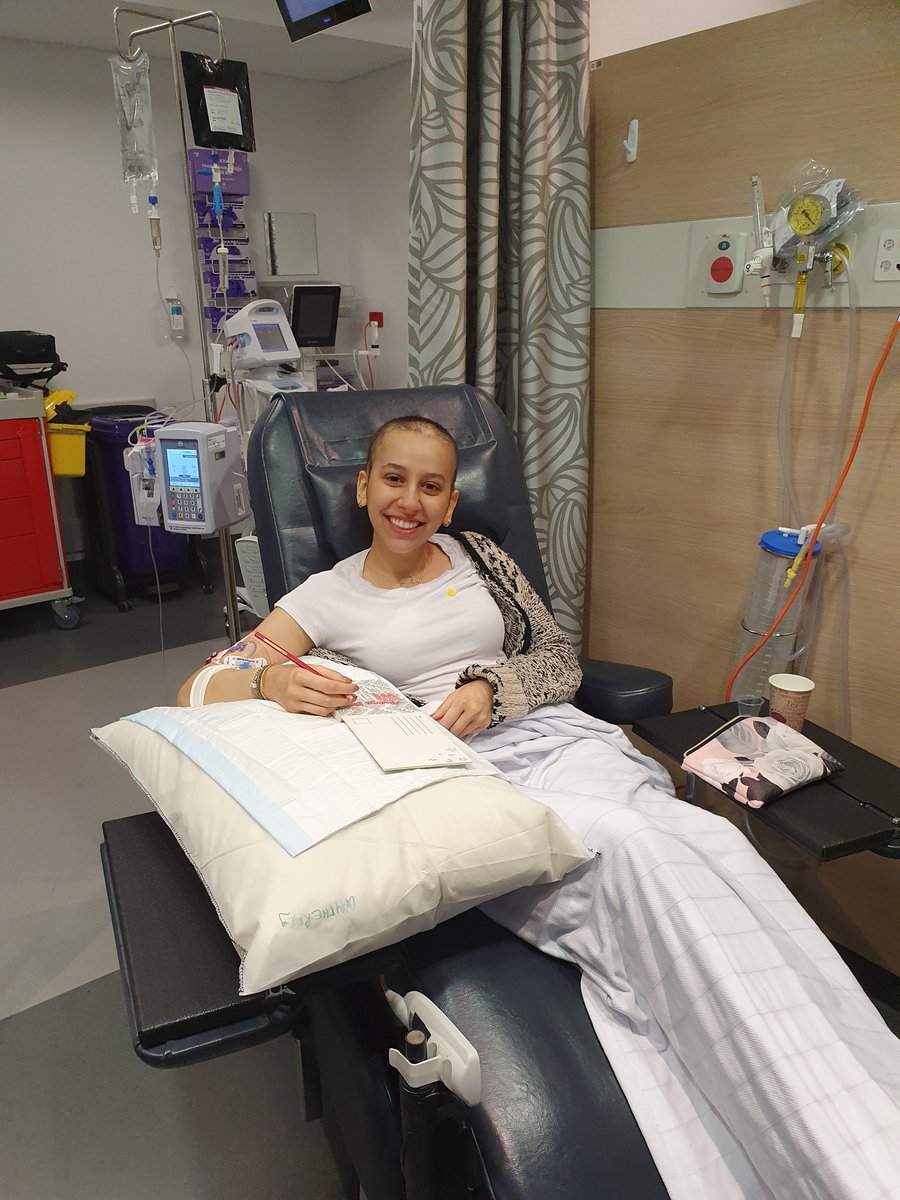 Pre-pandemic, cancer patients had access to services such as physiotherapy, meditation, yoga and a wig library. During 2020, those services were all closed.

Lea was also only allowed one visitor for an hour, per day.

"I would've liked my family to be there more," she said. "[But] I'm grateful for video calls."

Treatment would finish mid-afternoon and Lea would get home between 3 and 4pm.

"After a day of chemotherapy, I would feel very nauseous. I would be very tired," she said. "It's kind of like my whole body doesn't have energy."

"My team would give me tablets for nausea but they didn't really help," she added.

During the first few cycles of chemotherapy, Lea didn't know how to cope with the side effects. Until she realised sleep was the best way to let the nausea subside.

When she woke up, it would be dinnertime; and similar to breakfast, she would opt for something plain. 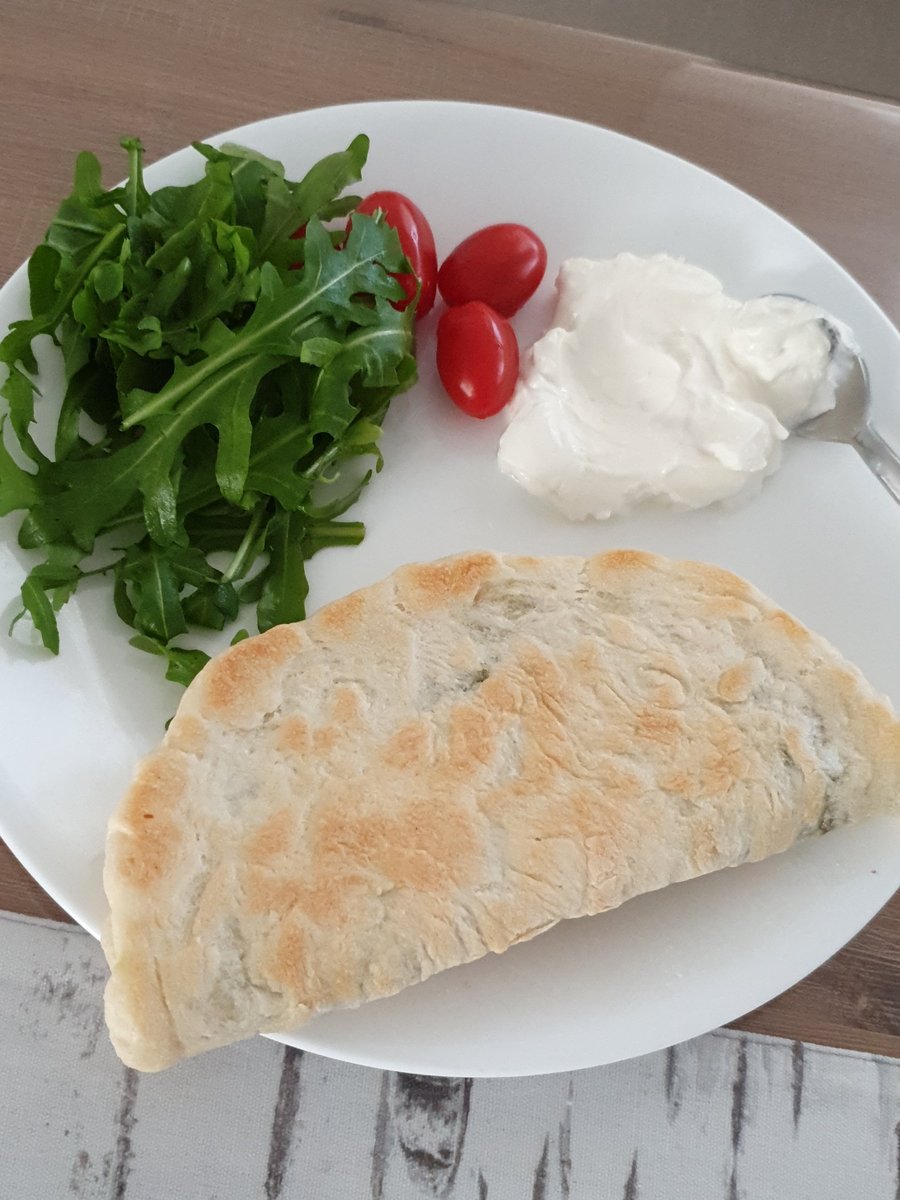 On days when Lea was feeling better, she'd try to get some exercise in.

"I do either yoga or Pilates," she said.

"Meditation was also something that was helping me, especially to fall asleep. One of the drugs you take with chemotherapy is steroids and steroids really mess up your sleep. So, that was kind of helpful."

After dinner, Lea would wind down for the night and watch some TV and prepare for bed.

"I'd watch Friends, brush my teeth, there were a few like droplets that I needed to take before bed, so of course, get on top of that, pray and then fall asleep," she said.

On the second day of Lea's three-week cycle, she would take a different chemotherapy drug. And every afternoon after taking it, she would spike a temperature.

"Spiking in temperature is not a good indicator when you are immunocompromised because it could be an infection, I could be septic, something could be going on in my body," she said.

Every time this happened, she'd have to go to the emergency department to see what was going on.

The nurses would check her bloods and wait for results, before admitting Lea to a bed, giving her a dose of antibiotics and monitoring her for a few days.

This happened four times before they realised Lea was having a reaction to the drug. 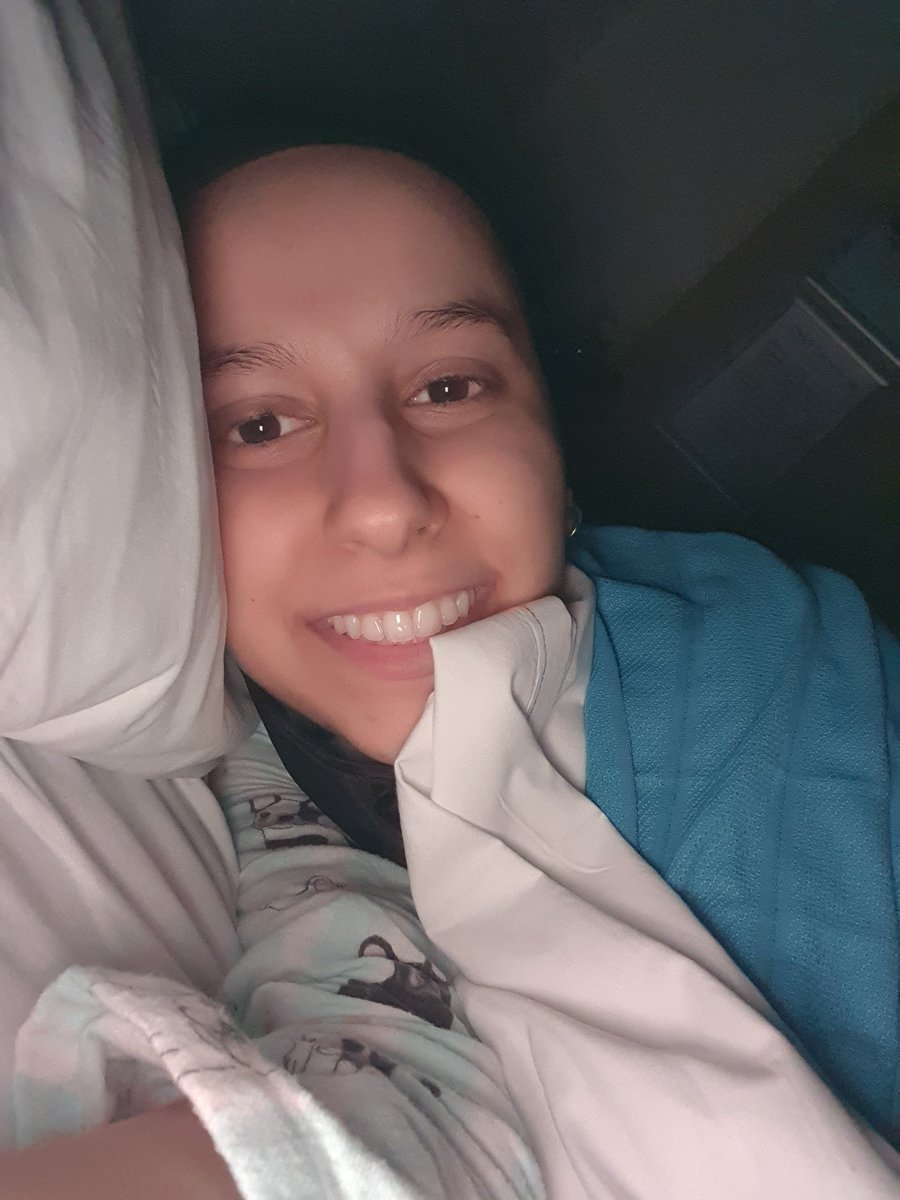 "There was no running away from going to hospital and being admitted every cycle," Lea said.

"And that stay in hospital - when not having family or friends - was the hardest because I'd stay for around three, four days."

Now, over a year and a half since her diagnosis, Lea's happily cancer-free.

She's been in remission since August 2020 and has returned to full-time study. 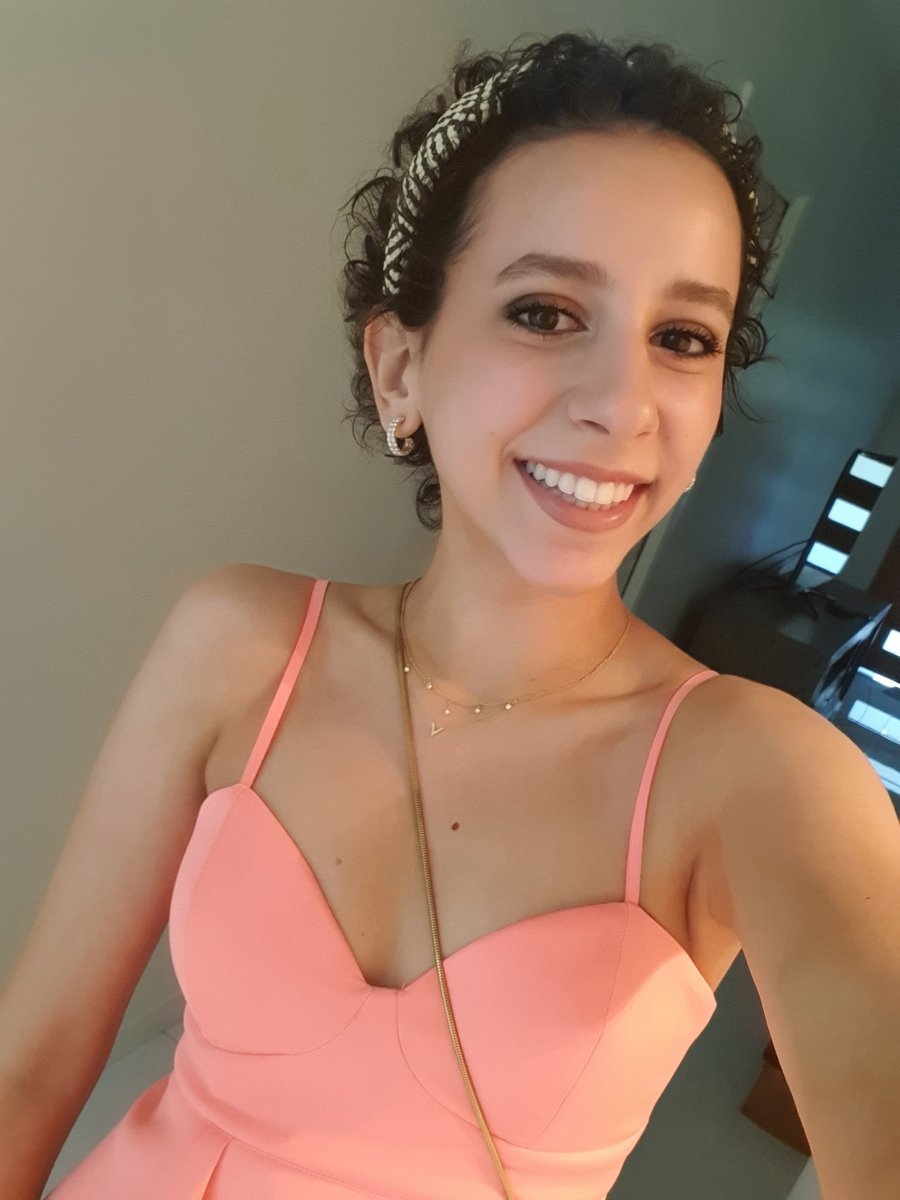 "Cancer changed what I see important in life," she said. "It has changed the way I look at myself. It has also taught me to put myself first.

"To look back at it and think, oh wow. I was so strong. I went through that and I was resilient and I can go through anything.

"I definitely surprised myself with how strong I was."