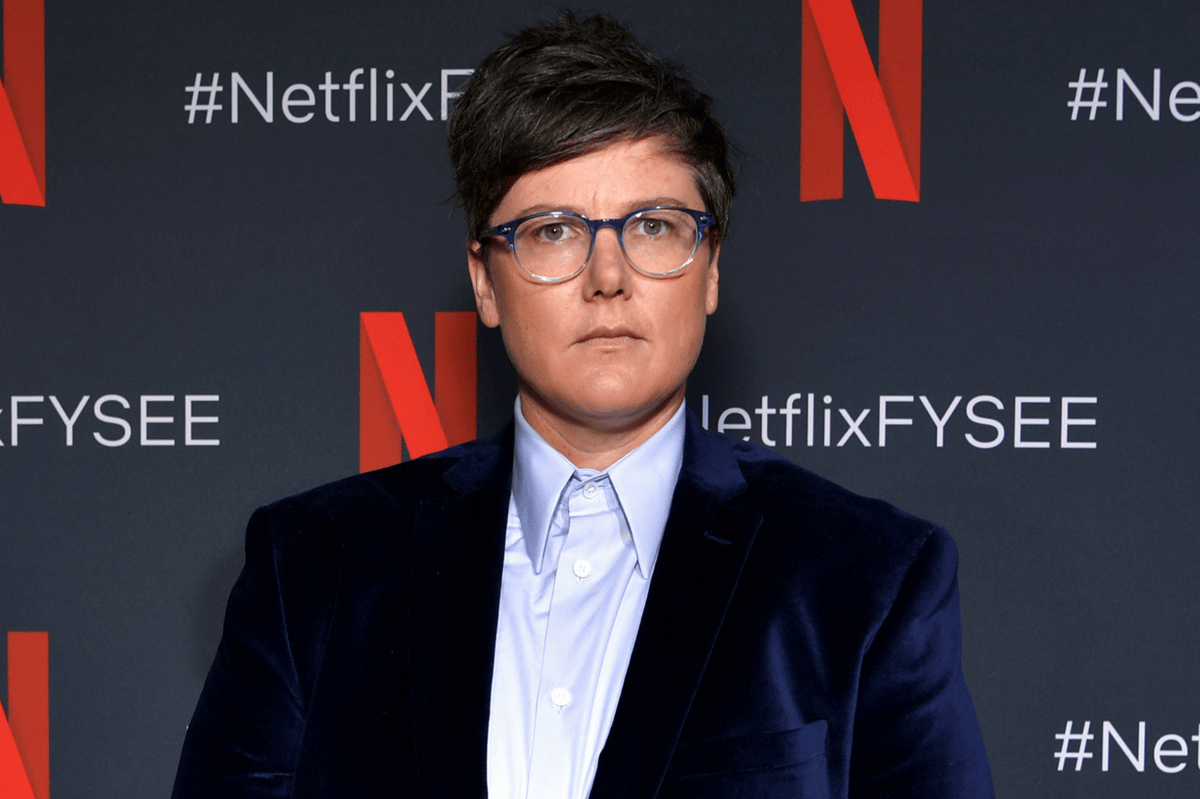 Hannah Gadsby discovered she was funny almost by accident.

She would say something, and people would laugh. She didn't understand why, at first, but after figuring it out, it became the go-to socialising tactic of young Gadsby.

"I learned [humour] as a deflection method," the 42-year-old said in an interview with ABC's Conversations on her experience at school.

"Often I'd say things and people would laugh and I'd have to work out why it was funny. And once I'd done that, I'd do it again. That was a way of showing people I was participating, but I wasn't. I worked it out as a way of being involved without being involved."

Of course, now the world knows Gadsby is funny.

But her journey from a child not sure of her place in the world, to a stand up comedian with two Netflix specials under her belt, has been far from an easy, linear one.

Gadsby grew up in Smithton, a small town on the remote north-west coast of Tasmania, as the youngest of five children.

Home life was a little chaotic, "because you know, five kids", but wonderful.

"For someone like me who didn't know how to find a place in the world without being told, being a member of a large family was really great," she told Conversations interviewer Sarah Kanowski.

Gadsby played hockey until a knee reconstruction forced her to give it up, then she took up golf (she was pretty good, a blue-ribbon player who won state champion twice). 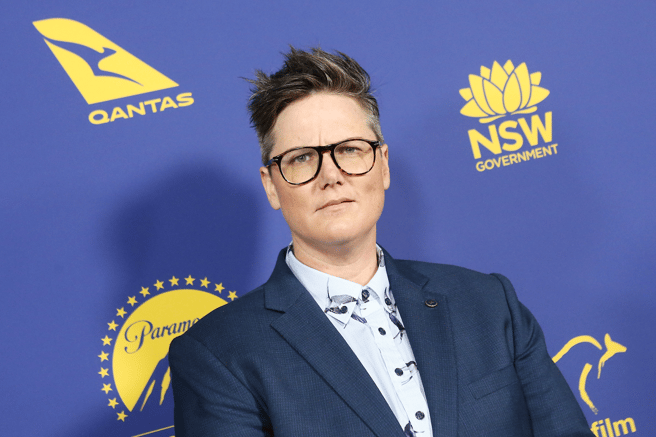 After school, Gadsby moved to Canberra to study art history at the Australian National University. She graduated in 2003, and worked for a while in bookshops and as a cinema projectionist in Darwin.

Then she spent two years as a farm labourer along Australia's east coast.

"It's a cycle of poverty that's almost criminal," she said.

She was effectively homeless, and reflecting on that time in her life is traumatic, even now with it well and truly behind her.

"I think I was busy just disappearing... I didn't think I had a place in the world or deserved one," she explained.

Gadsby credits two things with helping her out of that period.

Finding comedy and reconnecting with her family, who she had just "drifted away" from in her years of being lost.

She lived with her sister in Adelaide for a while, and then her brother in Melbourne, which helped her find her "adult feet". 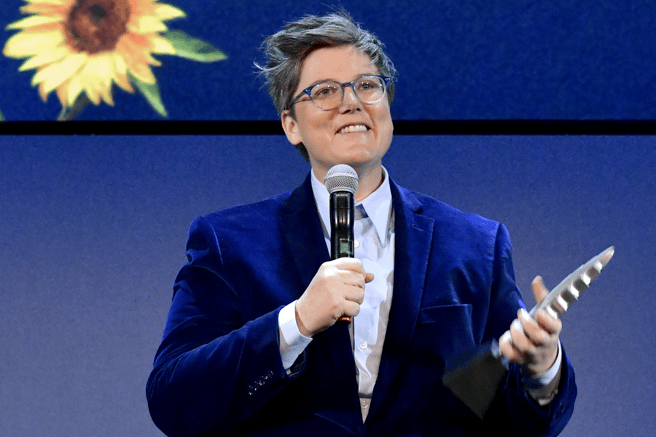 In 2006, she entered Raw Comedy and progressed through the heats to win the national competition.

She told the New York Times her ability to speak to a large room in a comedy set was like backward wiring, considering how frightened she was of smaller interactions.

In retrospect, her diagnosis with autism - which came in 2015 - helped her understand these idiosyncrasies.

"I could never reconcile how I could be both childlike and really, really smart," she said. "Like, I've got an incredibly high IQ, but I can't read a bus timetable."

Gadsby told Conversations she had to fight for a diagnosis, after a doctor dismissed her queries about hormone fluctuations and prescribed her the contraceptive pill, something she also documents during her latest comedy special, Douglas.

After taking the pill, she found herself in a deep depression.

Thankfully, she had also recently got a dog: Douglas.

"What brought me out of that [depression] was Douglas, who was still a bit of a pup at that time, just staring at me while I was eating porridge off a wooden spoon at 8pm at night, like 'this is not living'.

"It was that sense of empathy that I felt for my dog that gave me an about face because I identified this just staring at me as empathy, that I didn't necessarily experience from humans. That's really the triggering for me looking more closely at autism."

There’s a bit of cat in him...#douglas

A diagnosis took a while, but after receiving it, Gadsby felt both relief and grief, because it meant looking back over her entire life - of feeling 'wrong' or confused - and realising why.

And if it wasn't for comedy, she may not have got it at all.

"[A diagnosis is] not incredibly accessible, and I don't think I could have chased that as successfully had I not been a sort of middling famous comedian," she explained, saying it wasn't necessarily the clout of being Hannah Gadsby but the confidence she had built over a decade of comedy that helped her push for it.

"I never had the confidence, I slowly built it up.

"If you're living with undiagnosed autism, a lot of the time it can feel like you're just wrong. It means that you overcompensate when people tell you stuff, and it just doesn't feel right but you think 'well I'm wrong' all the time, so you don't get the help you need, you don't ask for the help you need out of shame or confusion or isolation."

The clarity also lead her to write; specifically, to write Nanette.

For years, Gadsby had been - to use her words again - a "middling famous comedian".

She had toured a number of shows since 2007 across Australia, New Zealand, London and at the Edinburgh Festival. 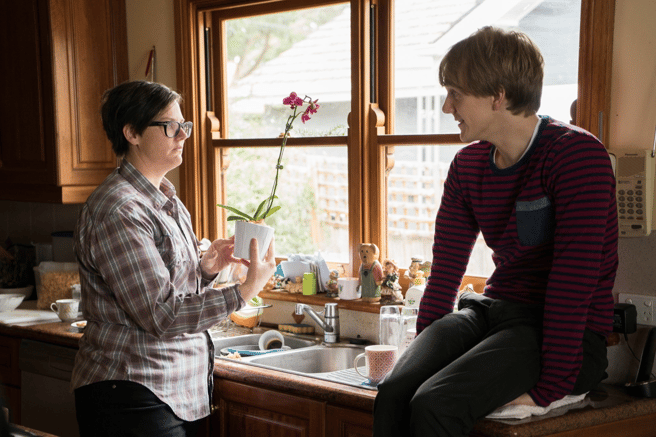 Hannah Gadsby and Josh Thomas in Please Like Me. Image: ABC.

But in 2015 to 2016, Gadsby felt her career had plateaued, and she was mad about it, especially as she watched mediocre men climb the entertainment ladder.

"I do what they do, and probably better, and from a harder point," she told the New York Times.

She was bitter, so she resolved to tear comedy down, to leave her career behind and well, alienate everybody - so she wrote Nanette.

"When I wrote Nanette I didn't think I could make it in this industry, so why not go out with a bang?" she told Conversations.

It was more than a bang. Nanette redefined comedy.

When a filmed special of the set was released on Netflix in June 2018, it became the cultural phenomenon everyone was talking about.

Before your very eyes, the show transformed from a punchline-filled comedy to a scorching critique of her own medium. By the end of the hour, your understanding of comedy – plus sexuality, misogyny and power – profoundly shifted. 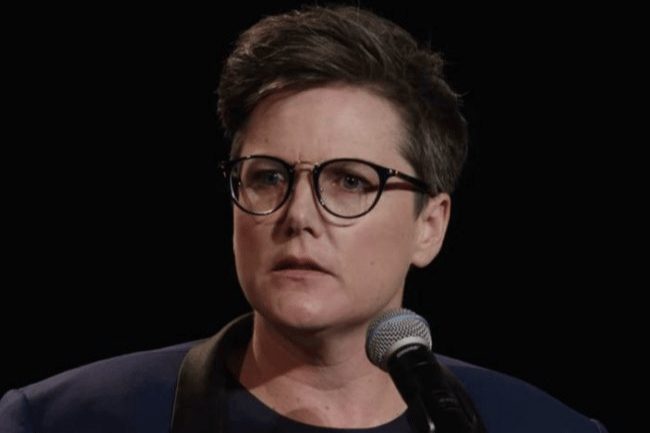 The show was immensely successful, even before Netflix. She toured it around her normal locations; Australia, London, Edinburgh, plus a run in New York.

Gadsby had all the successful she could possible imagine, but it was more frightening than anything else.

"I didn't understand what was going on around me... I was experiencing the highest point in my career but I couldn't enjoy it in the way that I always had assumed success would feel because the show was so traumatic to perform," she explained.

"Everyone was really excited but I was just so exhausted. I wasn't engaged, I'm only just starting to sort it out now."

Performing Nanette took its toll so much she "shut down a little," kept her world very small, and lost friends because she "didn't have anything left in the tank".

The payoff of Nanette came later.

"The catharsis is a long game. It was brutal and traumatic to do it night after night, but in the wash I feel like I'm on the other side of the trauma. I didn't think I was a candidate to be able to escape the trauma loop.

"I think I have a healthier sense of self than when I went into it, now the exhaustion is starting to wash away."

Safe to say I did not quit. Instead...I did 147 shows over 369 days in 40 cities across 12 countries and 432 NYT Monday crosswords from the archive: the Douglas Tour is done! I had a very nice time. I hope y’all did too. Wash your hands on the regular and be as well as you can.

And she went back on her onstage decision to quit comedy.

"But it became cathartic for me to say it onstage and kind of believe it.

Gadsby told the publication she was not a powerful person before Nanette: "I am not, as an individual, oppressed any more. But I still represent a collection of identities that are oppressed minorities".

Her most recent show Douglas is "starkly different" to Nanette, as much as it could be and still be a Gadsby show. It documents her autism diagnosis, some classic Gadsby art history humour, and a Louis CK joke.

It's fun and less stressful to perform, she said.

Gadsby told Conversations she felt lucky to have stumbled into a career that allows eccentricity, and since being diagnosed as living with autism, she's learned she doesn't have to act how society expects her to.

These days, Gadsby spends her time gardening, taking the dogs for a walk, learning piano and writing.

"I'm becoming more reclusive and I'm enjoying it," she said.