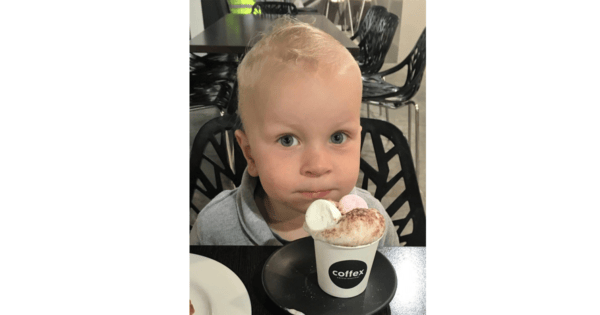 Thanks to our brand partner, Karicare+ Toddler

Kids can be spontaneous, unpredictable and impressively resourceful, especially when they’re hungry. My two kids, aged two and three, are always up for a snack and resort to various tactics and behaviours to silence their grumbling tummies. Here are some of the more ingenious, hilarious and unscrupulous things my little ones have done to get their hands on some grub.

I frequently find myself at the park, sans snacks. Despite my kids’ very dramatic protestations of starvation, they refuse to leave the joy of the swings to head home for a sandwich. Instead they loiter around the kid whose mum is switched on enough to bring food. They attach themselves to the snacked-up kid like Velcro and stare at the plentiful lunchbox until the poor child is guilted into sharing their cheese and cabana sticks.

There’s nothing like a cute toddler’s doe eyes to charm a barista into loading that babyccino with an extra marshmallow. My two-year-old has the routine down pat – smile, point to the marshmallow container then stick the bottom lip out ever so slightly and flash the baby blues. Works every time.

He's got it down to a fine art. Image: Supplied.

Hungry toddlers are extremely adept at grabbing items off the supermarket shelf, when your back is turned, and trying to unwrap them in the trolley. I’m pretty sure I have bought $328 in unnecessary items from our local supermarket, thanks to my kid’s penchant for stealth eating attempts as we brave our way through the weekly horror of grocery shopping.

4. Risked their life to reach a snack.

I blame Bob the Builder for this one. Can a hungry toddler construct scaffolding to get to a snack? Yes, they can! Occupational health and safety is thrown out of the window when height stands in the way of a toddler and a container of carbs. My kids have constructed steps using a side table and an upside-down washing basket to get to the carefully hidden treat box.

Little kids cotton on quick to the fact that grandparents are a gateway to any kind of food their tum tum desires. Custard? Strawberry yoghurt? Left over butterscotch pudding? Just stand at Nanna’s open fridge and point and it’ll be making its way down your gullet before you can say “sugar high”.

6. Lost the plot over a broken banana.

Hell hath no fury like a toddler whose banana is broken. When my little one is hangry, you’d better make sure that banana stays intact. Give it to him peeled and in one perfect piece if you value your ear drums and your sanity.

I have frequently returned from hanging out the washing or having a shower to find that the contents of our fruit bowl have rapidly diminished. As I search for the hiding offender, I find apples and pears scattered throughout the house featuring between one and three bite marks each…because eating one piece of fruit in its entirety is clearly way too cost effective.

"I find apples and pears scattered throughout the house." Image: iStock

If your munchkin is hanging for a yummy feed, be prepared to face unfounded accusations about giving their sibling a bigger portion. The penalty – an epic whinge fest with or without a side of head-banging tantrum. Make sure you measure that serve of bolognaise in perfectly equal portions and evenly distribute the parmesan or put in your ear-plugs and duck.

My kids have also resorted to eating grass, snacking on the dog’s food and retrieving hors d'oeuvres out of their noses.  Not my favourite parenting moments. Your best bet is to try and ensure your kids never get hangry by always keeping nutritious snacks with you. That snacked up kid at the park will be ever so grateful.

What is the funniest thing your child has done while hangry?