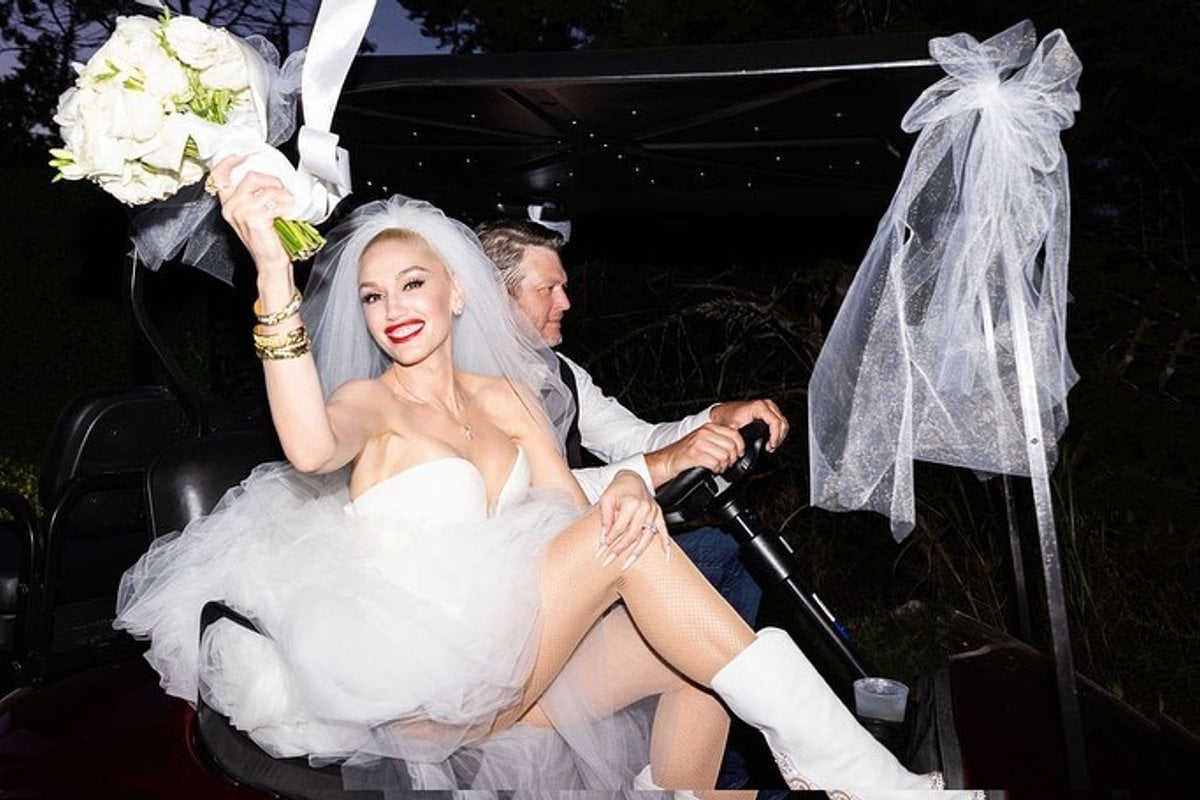 On Tuesday, Stefani announced the news on Instagram, sharing photos of the couple on their special day.

After five years of dating, Gwen Stefani and Blake Shelton announced their engagement back in October 2020.

At the time, Stefani was still married to her first husband Gavin Rossdale, and Shelton was married to fellow country singer Miranda Lambert.

While Stefani and Shelton were merely acquaintances, the pair became close when they began to experience the breakdown of their marriages at the same time.

After Shelton shared with the cast that his marriage with Lambert was coming to an end, Stefani asked to speak with him privately.

"I thought it was going to be another one of those things-are-going-to-be-OK talks," Shelton recalled.

"She didn’t tell me much, because we didn’t know each other at the time, but she said, 'I’m going through something very similar to what you’re going through. I understand. And I hate it.' That’s kind of how our friendship and bond started."

"It went from that, to checking in on each other once a week through email — 'This shit happened to me, what happened to you?' — to maybe three times a week, then every day, to 'Hey, here’s my phone number if you ever want to text.' Next thing I know, I wake up and she’s all I care about, and I’m ­wondering if she feels the same about me."

He added: "Gwen saved my life. Who else on earth could understand going through a high-profile divorce from another musician?"

After several months of rumours, the pair announced that they were dating in November 2015, with Stefani telling Ryan Seacrest: "To be super honest, it is kind of crazy we both went through the same thing at the same time."

At the time, the couple faced backlash over their relationship, with some fans even doubting whether their connection was real or not.

In 2017, fellow The Voice judge Adam Levine defended their relationship in an interview on The Howard Stern Show.

"It’s really beautiful," he told Howard Stern. "Because it’s in the public eye, a lot of people want to have their own bullsh*t opinions about it, but I’m there. I see it every day. I have a pretty unique perspective on it and it’s real, man."

While Shelton doesn't have any children of his own, the 43-year-old has fully embraced his role as step-dad to Stefani's three sons.

"He is a good dad, actually. He's been helping me out a lot," Stefani told The Today Show. "I literally get to the point where I’m like, 'You gotta get home, I need some help.' It’s hard. I’ve got three boys."

In fact, the band’s popular song ‘Don’t Speak’ was written about the couple’s break-up. While Stefani dreamed of marrying the bassist, Kanal ended their relationship in 1994.

“We were on tour for [No Doubt’s album] Tragic Kingdom for 28 months. We were going through the breakup, and in every interview, we were talking about it so we were opening this wound on an hourly basis. It was so brutal but I don’t know how we made it through,” Kanal recalled in an interview with The Guardian.

While the breakup was hard on the pair, the former couple continued to work together for many years afterwards.

In 1995, Gwen Stefani, the former lead singer of No Doubt, met Gavin Rossdale. At the time, No Doubt was on tour with Rossdale's band, Bush, and the Goo Goo Dolls.

"I threw a party in New Orleans just as an excuse to hang out with her," Rossdale recalled of their first date in 2010.

"We drank a bunch of hurricanes and went around the French Quarter. We had our first kiss that night."

In the early years of their relationship, Stefani and Rossdale were considered rock royalty. After six years of dating, the pair were engaged on New Year's Day in 2002. They later married in London in September 2002, with Stefani wearing a custom pink and white silk Dior bridal gown.

Shortly after their wedding, however, their marriage faced a number of issues.

In 2004, the Bush frontman learned that his goddaughter, Daisy Lowe, was actually his biological daughter. At the time, Daisy was 14.

Daisy's mother, Pearl Lowe, who was close friends with Rossdale, had neglected to tell him that Daisy was the product of a one night stand they had.

For several years after the paternity test results were revealed, Rossdale cut off all contact from Pearl and Daisy.

However, Rossdale and his daughter, who is now 31 years old, have since formed a closer relationship.

"[It was] a very interesting time," Daisy told the Evening Standard.

"That age is when you're at your most malleable; you're developing frontal lobes… I now have a really good relationship with my father. It's been blossoming for the past year but it really happened over Christmas. We got to spend time together."

After the bombshell about Rossdale's daughter dropped, Stefani and Rossdale faced another hiccup in their relationship.

In 2010, Courtney Love confessed to sleeping with Rossdale while he was in a relationship with Stefani.

"You mean he was having sex with you while he was with her?" Howard Stern asked Love.

"Everyone… yeah… and a few other people," she replied. "We didn’t have a lot of pressure on each other, but we did like each other quite a bit."

In response, Rossdale shared this message on his Facebook page: "Gwen and Gavin Rossdale would like to assure their fans that anything that may have occurred prior to their marriage has no impact on their current situation. All is well with the Rossdale family."

Amid the ups and downs in their relationship, Stefani and Rossdale welcomed three children together – Kingston in 2006, Zuma in 2008, and Apollo in 2014.

In 2015, however, the pair announced their divorce after 13 years of marriage, with Stefani citing "irreconcilable differences".

At the time, it was reported by Us Weekly that Rossdale had been caught having an affair with the couple's nanny, Mindy Mann. It was reported that the affair had lasted three years.

"It was the beginning of hell," Stefani told Harper's Bazaar, reflecting on her divorce.

"My dreams were shattered. All I wanted my whole life was to have babies, be married, like what my parents have."

I am in heaven - Grateful for these 4 miracles

Stefani and Rossdale's divorce was finalised in April 2016. But although the pair continue to co-parent their three children, they struggle to get along.

"They do their best to get along for the sake of the kids, but they only communicate when they need to for the kids," a source told Hollywood Life.

"They have trouble even being in the same room together."

Amid the COVID-19 pandemic, Stefani has been co-parenting her three children with her ex-husband, Rossdale.

While the kids normally see Rossdale more frequently, the pandemic has meant that he hasn’t seen his children as much as usual.

"It’s a tricky one for all divorced parents," Rossdale said in a recent radio interview.

"I know who’s around me — no one is,” he added. “And I know who’s bringing me the coronavirus — no one is. But you send your kids out to someone else, and they come back to you and now you’re prone to whoever they’re with."