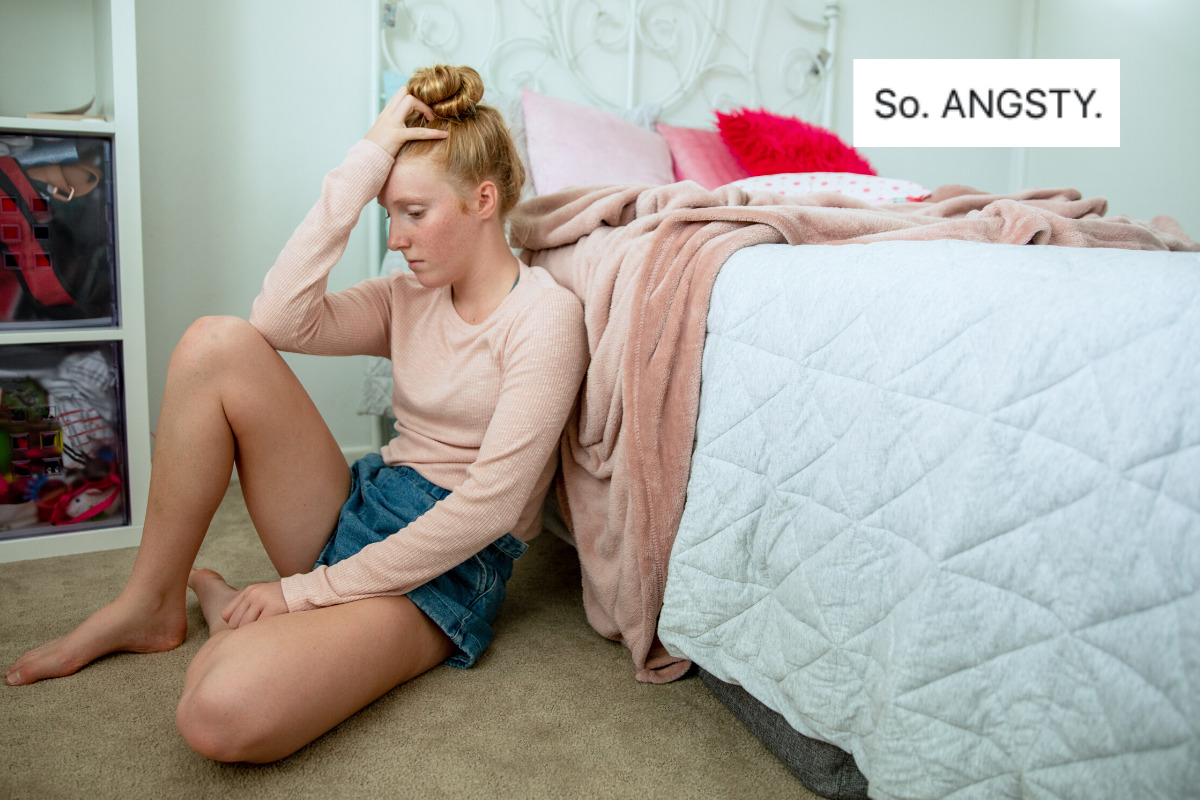 ﻿Puberty. It happens so fast. One minute they’re cute little munchkins looking up at you with adoring eyes, the next they’re tall enough to look you in the eye. That is, if they’re not looking at their phones the entire time.

It’s such an awkward stage. The strange smells. The weird moods. The tricky conversations. The trickier silences.

At the same time, it’s an amazing stage, as you witness them morph from childhood into adulthood, and sometimes you catch your breath because you can’t believe that you created someone so gorgeous (if a little stinky.)

We asked Mamamia readers to share some of their experiences of parenting tweens and teens through puberty. Hands up if you can relate...

No matter how carefully you explain the human reproductive system to them, they’ll end up with the wrong idea about something.

"I spent time explaining periods to my daughter thoroughly. I was quite proud of my clear and comprehensive explanation until it emerged down the track that I forgot to tell her it happened every month. She thought it was a one-off."

They’ll grow lots of hair, and you’ll end up seeing it… somewhere.

"SO MUCH PUBIC HAIR in their bathroom. Incredible."

"Then once they discover deodorant, they won’t know when to stop."

"Either BO or too much deodorant… all the smells. It’s feral."

Showers will go on forever, but you won’t be sure what they’re actually doing in there.

"My son NEVER seems to actually wash in his 500-hour shower, as it’s affectionately known by his three younger sisters."

Or maybe you will be.

"One part of them is really clean. Just for the record, I have two teenage sons."

"As soon as I accidentally walked in on son number one, I gave him a box of tissues and said, 'Wash your own sheets if necessary and enjoy.' It was talked about in the house, so number two had a tissue box in anticipation."

They’ll get emotional for all sorts of reasons, or no reason at all.

"A few days ago, my daughter was a bit tearful in the morning but she couldn’t work out why. She kept saying, 'I just feel like I’ve done something wrong.' After ruling out every other fathomable reason, we put it down to mood swings. Poor love."

"My eldest girl initially found many of the conversations awkward: 'When do I shave?' 'When do I start wearing a bra?' 'When do I need to start looking at skincare?' 'I don’t want to wear makeup – do I have to?' We forget how utterly confusing these times are."

You’ll need to talk to them too, but you’ll have to choose your moment – ideally, when they can’t escape.

"I used to have sex talks in the car to school, starting off with teaching respect of others, girls/guys you like, but also those who might like you and you not reciprocate. Then as they got older, more details!"

If they get comfortable enough with talking to you about sex, they’ll have a lot of questions.

"My kids are 14 and 10 and come to me daily with questions like, 'Can you break a penis from vigorous sex?' or 'Can you have sex when you have your period?'"

They’ll need you more than ever.

"One thing I absolutely know to be true is that they will look to you to be a sounding board and a punching bag, but also their soft place to fall."

Parents of tweens and teens, what would you add? Share your thoughts in the comments.