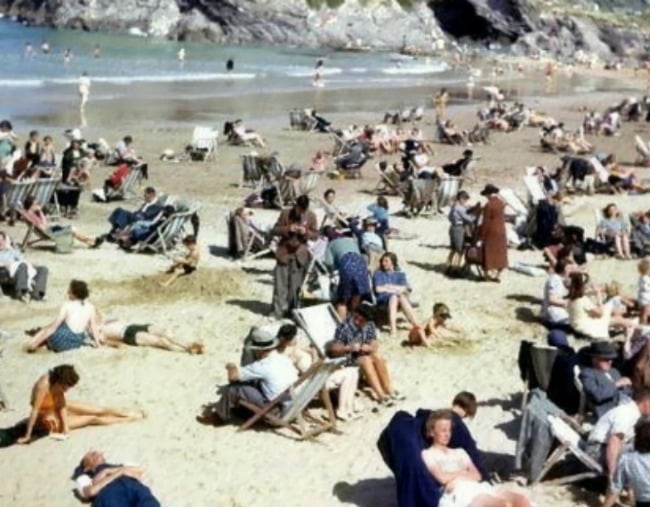 It’s Tuesday, the last instalment of the ABC‘s gripping Keli Lane documentary is on tonight and, oh, by the way, time travel is real.

You see, last week, a man named Stuart Humphryes, who has a particular interest in British history, tweeted a colourised photo of British war workers on a Cornish beach in September, 1943.

British war workers escape to the seaside - this Cornish beach was photographed in September 1943. (It would be lovely if one of you were able to identify which beach!) ❤️ pic.twitter.com/BpLyuwSb8z

The photo itself is fairly unremarkable apart from a few key points:

Please observe a man I have decided to name Paul doing something rather odd for 1943.

Is he... is he checking his phone?

Paul is looking down at a gadget between his hands, and he seems highly invested in it.

A number of time travel experts weighed in on Twitter, with one man writing, "clearly the man in the shot is a time travelling tourist checking his mobile device. Finally the evidence we need that time travel is real.

"We now see things in old photos that we missed before but [now] we know they’re phones."

One woman pointed out that when you zoom in, it's "not a phone in his hands".

"It's a round circular tube looking object about 5-6 inches tall in front of his face."

Humphryes, however, had a clever point. "But that's *exactly* what mobile communicators look like in 2243," he wrote. "So he is a time traveller after all, only from our future."

But while it's all well and good to accept that Paul is a time traveller, there's an issue.

Who... who is he texting? Or stalking on Instagram? No one else has a phone because it's 1943.

Well, obviously he's texting other time travellers, about his time travel observations such as the fact people randomly sit with their backs to the sea in 1943.

In conclusion, Paul is irrefutable evidence that not only time travel is real, but also that the entire plot of Outlander is a true story.

Now excuse me while I go to Inverness and try to find myself a Jamie.

B
Barry Clark 3 years ago

The beach is in Newquay,Cornwall.The 'Island' is in the background.I think the beach is called Towan Beach.I grew up there 50+ years ago.

Since the fourth Doctor Who is also on the beach, he must be communicating with him.