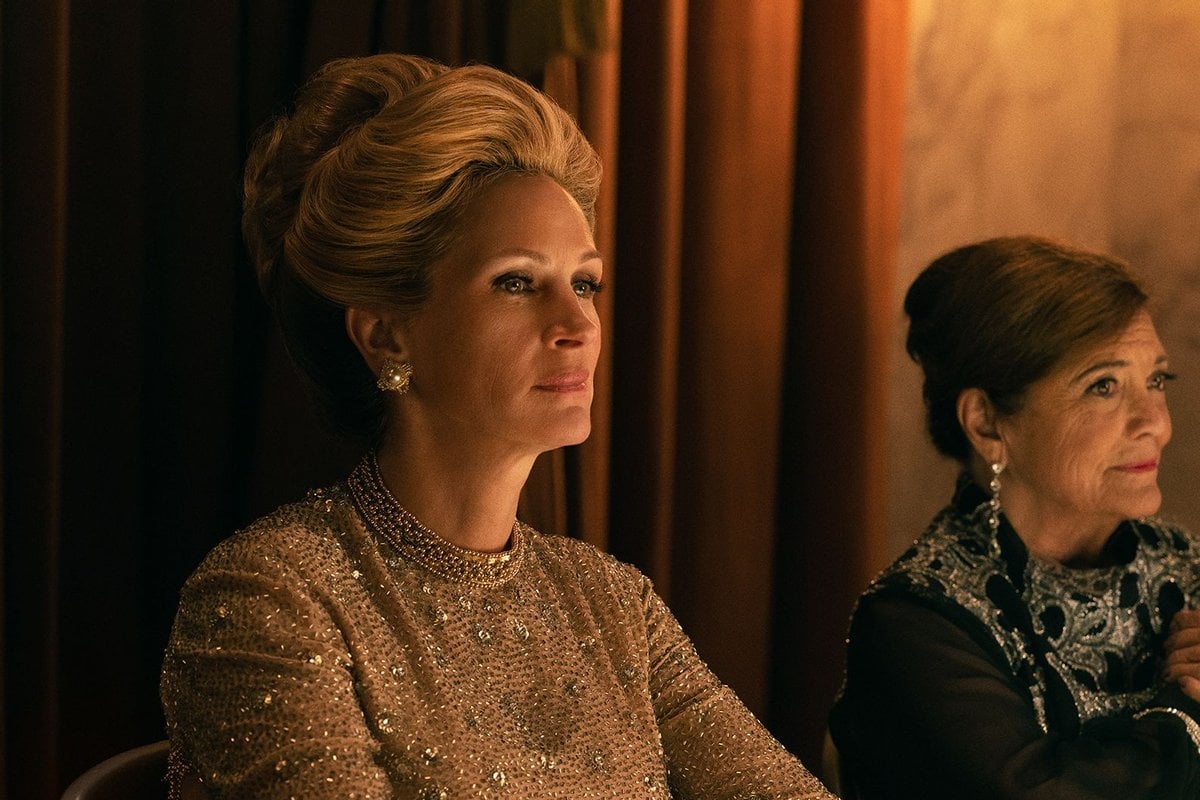 There's nothing quite as intriguing as a well-made political thriller and Stan's newly announced series Gaslit really fits the bill.

Starring Academy Award-winner Julia Roberts as Martha Mitchell, the series is a modern take on Watergate, focusing on the untold stories and forgotten characters of the history scandal.

The Watergate scandal took place in the United States and involved the administration of US President Richard Nixon from 1972 to 1974 and ultimately led to Nixon's resignation.

Take a look at the trailer for Gaslit on Stan below. Post continues after video.

The scandal stemmed from the Nixon administration's continual attempts to cover up its involvement in the June 17, 1972, break-in of the Democratic National Committee headquarters at the Watergate Office Building in Washington, D.C.

Gaslit, which is based on the first season of the critically acclaimed Slow Burn podcast, will centre on Julia Roberts' character Martha Mitchell, who is described as "a big personality with an even bigger mouth".

Martha is the wife of Nixon’s loyal Attorney General, John Mitchell (played by Sean Penn), and is also very much seen as a Arkansan socialite.

The twist in the story comes when Martha, despite her party affiliation, is the first person to publicly sound the alarm on Nixon’s involvement in Watergate. An act that causes both the Presidency and her own personal life to unravel.

John Mitchell might be President Nixon's most trusted advisor and best friend, but he's also hopelessly in love with his famously outspoken wife, leaving him forced to choose between Martha and the President.

According to Gaslit creator, executive producer, and showrunner Robbie Pickering, the goal of the series is to bring humanity to this subject and take the story further than the standard male-driven political dramas that usually dominate this time period.

"Gaslit is the Watergate story you’ve never heard before. At the centre of the show is Martha Mitchell, an unlikely whistleblower who is the first person to bust the whole scandal wide open and ultimately becomes the subject of a vicious White House smear campaign enacted in part by her own beloved husband, Attorney General John Mitchell," Pickering said in a statement.

"I can’t wait for viewers to experience the extraordinary performances in this remarkable ensemble, led by Julia Roberts, brought to life in this thrilling, stranger-than-fiction tale of marriage, love, betrayal, and ultimately, hope."

Gaslit will premiere Sunday, April 24, same day as the US and only on Stan.