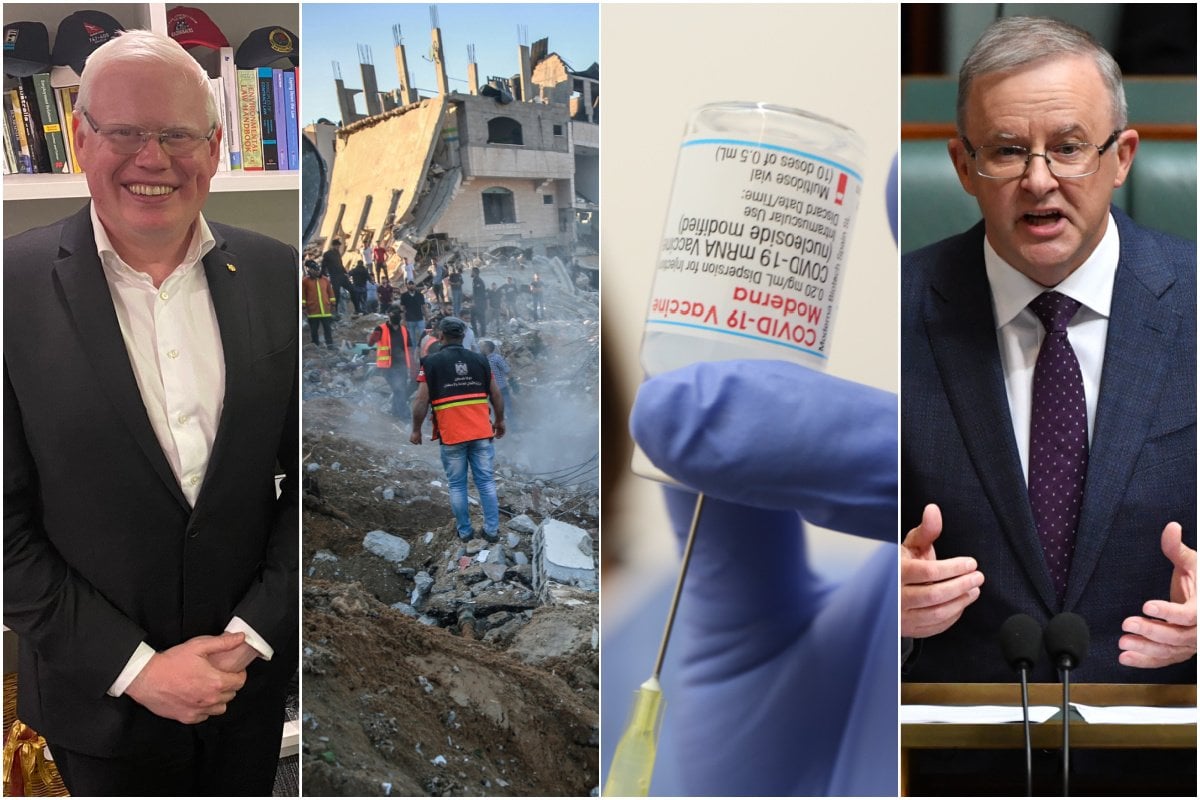 The NSW government has been forced further into minority after it lost its second MP in as many months to sexual assault allegations.

Kiama MP Gareth Ward on Thursday night stepped aside as a minister after naming himself as the politician under investigation for "sexual violence-related offences" dating back eight years.

Police are investigating the allegations, which reportedly took place in 2013, they confirmed on Thursday.

NSW Liberal MP and minister for families Gareth Ward has released a statement:

“I have not been contacted by Police in relation to any allegations. I deny any wrongdoing.”

But he and Premier Berejiklian confirm he will stand aside as minister and from Liberal party room pic.twitter.com/ap7hKKOK34

In a statement on Thursday night Mr Ward denied any wrongdoing, and said he had not been contacted by police.

"Today I have been made aware by a journalist of an investigation into me by NSW Police," he said in a statement.

"I have not been contacted by police in relation to any allegations.

"I deny any wrongdoing."

However, Mr Ward said he would step down as the minister for families, communities and disability services and remove himself from the Liberal Party room while the investigation is ongoing.

Mr Ward's move to the crossbench means the coalition government is three MPs short of a majority, with former sports minister John Sidoti also sidelined amid a corruption inquiry.

Flights from India are due to resume on Saturday, following a pause to allow the Howard Springs quarantine facility to catch its breath.

The Qantas flight due into Darwin on Saturday morning is expected to have around 200 repatriated Australians on board, who will do two weeks of quarantine at Howard Springs.

The operation to repatriate the first Australians from India is launching today as 40 cricketers and crew - currently in the Maldives - prepare to travel home. #9Today pic.twitter.com/i6vbxCVVeM

Around 900 Australians who are listed as vulnerable by the Department of Foreign Affairs will be given priority on the resumed flights.

40 Australian cricketers and support staff currently quarantining in the Maldives after fleeing India could be home as soon as Sunday after a deal was allegedly struck with the NSW government for Australia's IPL contingent to fly to Sydney via Kuala Lumpur on the weekend.

Every Australian adult could be vaccinated by Christmas as Moderna deal struck.

Every Australian adult could be vaccinated by Christmas with the government securing a deal for 25 million Moderna doses.

Health Minister Greg Hunt has also said an approach to market would be launched within the next 10 days for companies to locally produce mRNA vaccines, such as that produced by Pfizer and Moderna.

He expects at least one to be made in Australia by next year.

"I won't make a guarantee on that, but I am confident that over the future period we will have mRNA production in Australia," Mr Hunt told reporters in Canberra.

Moderna has expressed interest in setting up an Australian base, as Mr Hunt confirmed 25 million doses of the US biotech company's vaccine had been secured.

The first 10 million are due to arrive this year while the rest - booster jabs for different variants - are slated to be delivered next year.

The Moderna jab has not yet been approved by the Therapeutic Goods Administration but the company is expected to apply for that soon.

Anthony Albanese has promised to build 30,000 social and affordable houses over five years if Labor wins the next election.

The opposition leader used his budget reply speech on Thursday night to unveil plans to borrow $10 billion for a housing future fund.

Investment returns would pay for 20,000 social houses, including 4000 for women fleeing violence and older women at risk of becoming homeless.

A further 10,000 affordable dwellings would be built for health, emergency services and other frontline workers.

LIVE: Watch as I deliver Labor’s #BudgetReply – our plan for a better, stronger Australia: https://t.co/0M66oQ2S6a

"The security of a roof over one's head should be available to all Australians," he told parliament.

Labor expects 21,500 full-time jobs in construction and the broader economy will be created in the first five years, with a guarantee one in 10 on-site workers will be apprentices.

The Future Fund Board of Guardians would manage the program, with investment returns annually transferred to the National Housing Finance and Investment Corporation.

The returns are also slated to provide $200 million for repairs and improvements on housing in remote Indigenous communities.

Some $100 million would be spent on crisis housing for women fleeing violence and older women at risk of homelessness.

Veterans who are homeless or at-risk of falling into that category would be provided with $30 million in new houses and specialist services.

A further six Victorians may have been exposed to the virus after staying at the same South Australian quarantine hotel where a Melbourne man is suspected of catching COVID-19.

The Department of Health has identified six people now in Victoria as having left the third floor of Adelaide's Playford Hotel during the potential transmission period.

All have been contacted and are now urgently being tested as they undergo another 14-day quarantine stint.

It comes as the Victorian government cracks down on businesses flouting QR code check-in rules after the state's latest coronavirus scare exposed flaws in the system.

Contact tracing efforts were hampered this week as some patrons at the Curry Vault restaurant, where the infected Melbourne man dined on Friday night, failed to use the QR code system.

In response, the state government on Thursday announced businesses breaking check-in rules will face a new $1652 on-the-spot fine, and further penalties of up to $9913 and prosecution for repeated breaches.

Vaccinated Americans told they can ditch the mask.

The US Centers for Disease Control and Prevention on Thursday advised that fully vaccinated people do not need to wear masks outdoors and can avoid wearing them indoors in most places, updated guidance the agency said will allow life to begin to return to normal.

The new guidance will still call for wearing masks in crowded indoor settings like buses, planes, hospitals, prisons and homeless shelters but could ease restrictions for reopening workplaces and schools.

The more people get vaccinated, the faster infections will drop - and the harder it will be for the coronavirus to mutate enough to escape vaccines, according to health experts.

This move comes as nearly half of the US population has received at least one dose of a vaccine and coronavirus cases are at their lowest rate since September.

Coronavirus-linked deaths in the US are at their lowest point since last April.

Scott Morrison has raised concerns about escalating violence between Israel and Palestine, which the United Nations fears could explode into full-scale war.

The prime minister has also expressed disappointment after a woman was charged in western Sydney for burning an Israeli flag.

Dozens of people have been killed in the worst violence between Israelis and Palestinians in several years and which shows no sign of letting up.

Prime Minister @ScottMorrisonMP has cautioned Australians not to “import the troubles” of other countries, as the ongoing clash between Israel and Palestine escalates.https://t.co/jYAYu6y1Sz

The conflict flared up after Israeli forces tried to forcibly evict Palestinians from their homes in the neighbourhood of Sheikh Jarrah and stormed the al-Aqsa mosque in Jerusalem.

Mr Morrison said it was important the conflict in the Middle East did not spill onto the streets in Australia.

"Of course we are all very concerned about what is happening there," he told 2GB radio on Thursday.

"We have been urging restraint from all parties involved there to not take any unilateral action on those very stressful and tense situations we are finding there.

"But those things should not be played out here in Australia."

Mr Morrison restated the government's policy of a two-state solution between Israel and Palestine, describing Australia as an agent for peace.

He urged Australians with ties to the conflict to act with tolerance and respect.

Mert Ney to be sentenced for CBD murder.

The man who repeatedly stabbed a woman in Sydney's CBD is due to be sentenced for her murder and for stabbing another stranger in the street.

The 23-year-old also admitted other violent offences including wounding with intent to cause grievous bodily harm for stabbing Lin Bo on the street during his CBD rampage.

The day Mert Ney struck terror in the heart of Sydney on a stabbing rampage a family was robbed of a daughter and sister. Today Michaela Dunn's family shared that loss with the court ahead of her killer's likely decades-long sentence. | @Kim_Pratt10 pic.twitter.com/n6tiJAnNiX

At his sentence hearing in the NSW Supreme Court in March, he gave graphic evidence about his fatal attack saying Ms Dunn had asked him a number of times if he was OK before he pulled out a knife.

The sex worker then "screamed very loud" so he started stabbing her repeatedly to make her be silent.

Ms Dunn's mother left the courtroom as he testified to having reached "the point of no return" after there were 20 or 30 stab wounds in her neck.

"She was going to die, no question about it."

He said he was then fully committed to his "final chapter" of being killed by police.

Ney denied a suggestion that he was motivated by religious extremism. He said he only yelled "Allahu Akbar" on the street and delivered the Islamic State salute so that the police would shoot him.

Prosecutor Craig Everson submitted Ney should be sentenced to life behind bars, despite his young age, guilty plea and mental health issues.

Justice Peter Johnson is due to sentence him on Friday.

The grieving parents of Aishwarya Aswath, who died from an infection at Perth Children's Hospital, say they were treated without compassion and have no doubt she would still be alive if their concerns had been addressed.

Aswath Chavittupara, 39, and Prasitha Sasidharan, 33, have laid bare their devastation at the loss of their seven-year-old daughter.

The couple say an internal report into the Easter Saturday incident has raised more questions than answers, and have renewed calls for an independent inquiry into their daughter's death and other critical incidents at the hospital.

The parents of Aishwarya Aswath have described a report into their daughter’s death at Perth Children’s Hospital as “inconsistent” and have renewed calls for a full independent inquiry. https://t.co/1gzgVCWzFx

"We didn't get the answers that we were looking for," an emotional Mr Chavittupara told reporters on Thursday.

"We knew they would only look at some of the areas and ignore the rest. That's why we've been pushing for an external inquiry."

Aishwarya was taken to the $1.2 billion hospital's emergency department with a fever and triaged by staff in the second-least urgent category.

Her parents pleaded for her to be assessed after her eyes became cloudy and her hands turned cold but were forced to wait for almost two hours.

She died soon after she was finally seen.

A report by WA's Child and Adolescent Health Services found Aishwarya died of sepsis after contracting an infection related to group A streptococcus.

The McGowan government has ruled out an independent inquiry into her death, while Health Minister Roger Cook has fended off calls for his resignation.

- Lebanese security forces say at least three rockets have been fired from south Lebanon toward Israel. They landed in the Mediterranean Sea causing no damage or casualties. Meanwhile, Israeli fighter jets have continued attacking high-rise buildings in the Gaza Strip.

More than 100 Palestinians have been killed in the past four days of military conflict, including dozens of children.

- Coercive policies in China's far western region of Xinjiang have led to a sharp decline in birth rates for Uighurs and other minorities, which could add to evidence of genocide, an Australian think tank says in a report.

- Prince Philip's life will be celebrated in a series of commemorative stamps showing the Duke of Edinburgh over the years.