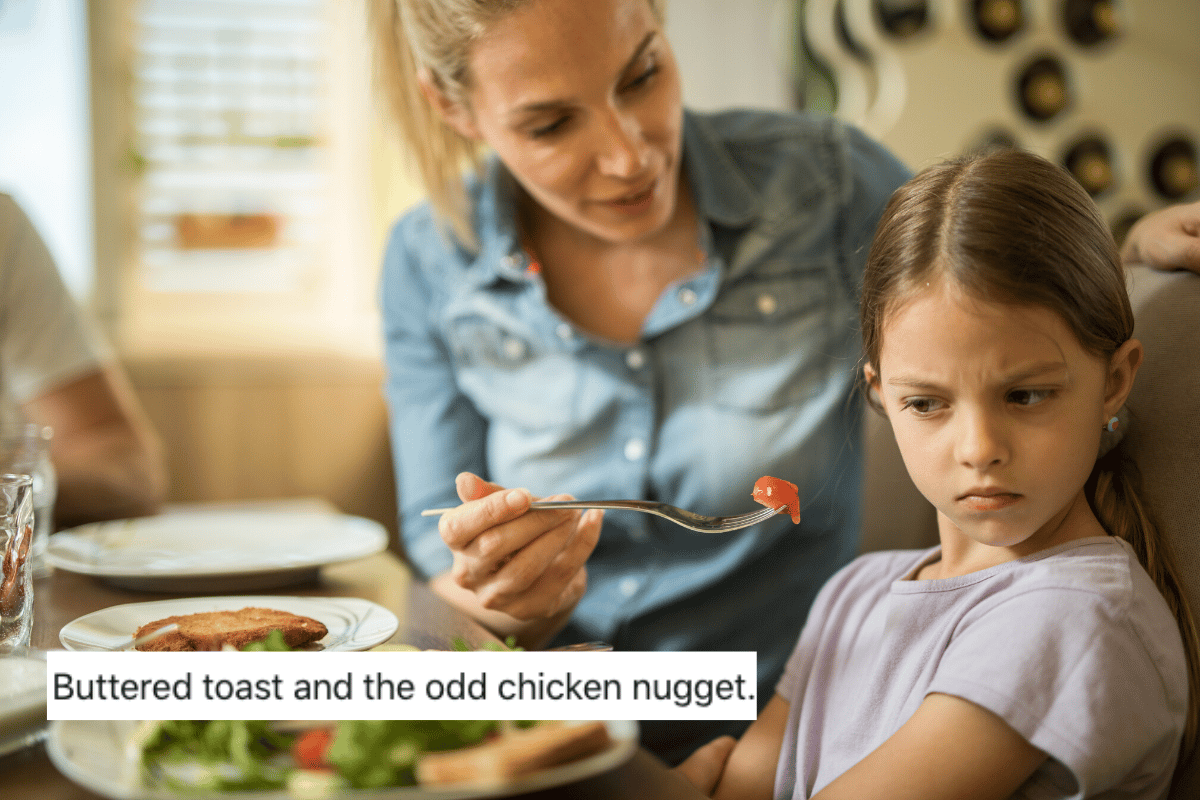 This is not a post listing magical veggie-filled recipes that every fussy eater will supposedly gobble down. There have been plenty of those posts.

This is not a post telling parents of fussy eaters what they’ve done wrong. There have been plenty of those posts, too.

Truth is, most parents of fussy eaters are sick of magical recipes that don’t work on their kids, and they already spend enough time beating themselves up.

The chances of getting our kids to eat steak and veggies are as tiny as this food. Post continues below.

I know that, because I’m one of them. (My daughter went through a toddler phase when she would only eat plain yoghurt and cheese Twisties.)

No, this is just a post to help parents of fussy eaters feel less alone. There are plenty of us who know how soul-destroying it is when our children refuse to touch the delicious, healthy food we’ve lovingly placed in front of them.

“The yearning I feel when I open a hipster parenting mag to see another chubby toddler hand captured in sunset light reaching for a sushi roll… only to turn back to my own three-year-old who hasn’t knowingly consumed anything healthy for over six months,” one mum admitted to Mamamia.

“I feel like a massive failure when I see other kids sit down to a plate of vegetables and meat, and they eat it up with delight,” another shared.

Even if you think your child’s eating habits are the absolute worst, know that there are other parents out there thinking the same thing.

Here, 13 parents of fussy eaters share exactly what their children will eat.

“My middle child basically lives on Vegemite toast. He also likes chicken nuggets. He used to like plain pasta but won't have that now, although he will eat plain rice. I love, love, love vegetables, fruit and salad, so I make all this delicious food that my kids just won't touch.”

“Tinned spaghetti and butter sandwiches, all day, every day here at the moment (nearly three years old). She goes through better stages, but she is yet to actually eat a green vegetable.”

“Chips, chips, chips and, thankfully, fruit. My two-year-old could live on passionfruit and chips if I let her."

“My eldest daughter lived on yoghurt and cheese for the longest time while she was little. She was ridiculously fussy up until about four years old, then she started trying things.”

“I have a kid who only eats plain cheese rolls, vanilla yoghurt, vanilla ice cream and Dairy Milk chocolate. I constantly think he lives in a state of malnutrition. He will eat veggie lasagne once a week but then the carrots are ever so slightly too obvious and it ruins my covert veggie operations. My six-year-old, on the other hand, will eat steamed spinach with a poached egg on a muffin with smoked salmon.”

“My son currently lives on fruit, bread, crackers and cheese (sometimes). I serve up the same meal we have, but he never eats it. We’ve tried toddler formula and toddler vitamins because seriously, we pull our hair out daily!”

“My three-year-old is pretty much sustained on buttered toast and the odd chicken nugget. It’s not for lack of trying. But I’m giving up. No more zucchini and cannellini bean cakes for me!”

“My son barely eats anything apart from sushi. It costs us a fortune, but at least he eats it! He doesn’t do bread, pasta, rice, noodles. He might have the occasional sausage and mashed potato, but he lives on sushi, chicken fingers and apples.”

“My four-year-old has been fussy from 18 months. She eats Vegemite toast and Vegemite sandwiches, yoghurt (but only certain types and it is always changing, and she never tells you until you have bought the wrong one) and grapes and strawberries. I don't have the energy to care anymore.”

“The main things my two kids eat are sandwiches (usually jam) and yoghurt. The amount of bread and yoghurt I buy in the weekly shop is embarrassing!”

“My son is three and for the past six months he will only eat pasta for dinner. I’m talking pasta cooked in stock (are there veggies in there?) with the fake powdered parmesan cheese on top. Anything else is like pulling teeth, so you can imagine I was queen of the pasta hoarding during COVID!”

“For six months, my son (four at the time) lived on raisin toast with peanut butter. Now he eats mainly white foods, and getting him to eat anything for fruit break at school is nearly impossible. Luckily his twin sister is a lot more open to trying new things and loves her fruit (not so keen on the veggies, though). They’ve just turned six, and deciding what to feed them is often the most stressful part of my day!”

Hang in there. A whopping 95 per cent of Aussie kids aren’t eating the recommended daily intake of vegetables, so there aren’t too many parents who can be genuinely smug. For most kids, fussy eating is just a phase, so at some point they’ll start eating different things.

Don’t give up, and don’t feel bad about asking for help. Just know that you are not alone.

Do you have a fussy eater? Share your contribution in the comments below.

Reply
Upvote
1 upvotes
Pure curiosity and no judgment... I’m wondering how children get to the point of only eating these few items when I’m guessing they were fed lots of veggies, fruit etc as babies?  I’m lucky to have big eaters that have never been given the choice to eat “what they want”. Can’t imagine the struggle so I wish you all the best!

Reply
Upvote
1 upvotes
Omg my son was horrendous growing up with food. There were three meals on rotation, toast, lots of fruit and junk! And to top it off he had allergies to nuts & sesame seeds! I gave up forcing him to eat different foods and eventually he just wanted to try different things and now eats most things without complaining. He’s 11, 170cm tall & doesn’t look like he’s malnutritioned & is always in pretty ok health. Hang in there it gets easier & they will get better. One thing I did do while he was younger was give him vitamin gummies. He thought they were lollies but I felt better that he was having vitamins to replace lack of veggies. And to top it off I’m Italian and his dad is Greek. We cook all the time and even grow alot of our own food! So we were stumped with our son & how fussy he was.
News
General
Opinion
True Crime
Politics
Sport
Explainer
Entertainment
Celebrity
Reality TV
Movies
TV
Books
Rogue
Royal
Lifestyle
Beauty
Fashion
Weddings
Home
Wellness
Health
Fitness
Travel
Food
Parents
Before The Bump
Pregnancy
Baby
Kids
Teens
School
Parent Opinion
Work & Money
Money
Finance
Career
Lady Startup
Relationships
Sex
Dating
Separation
Friendship
Family
Real Life
Couples