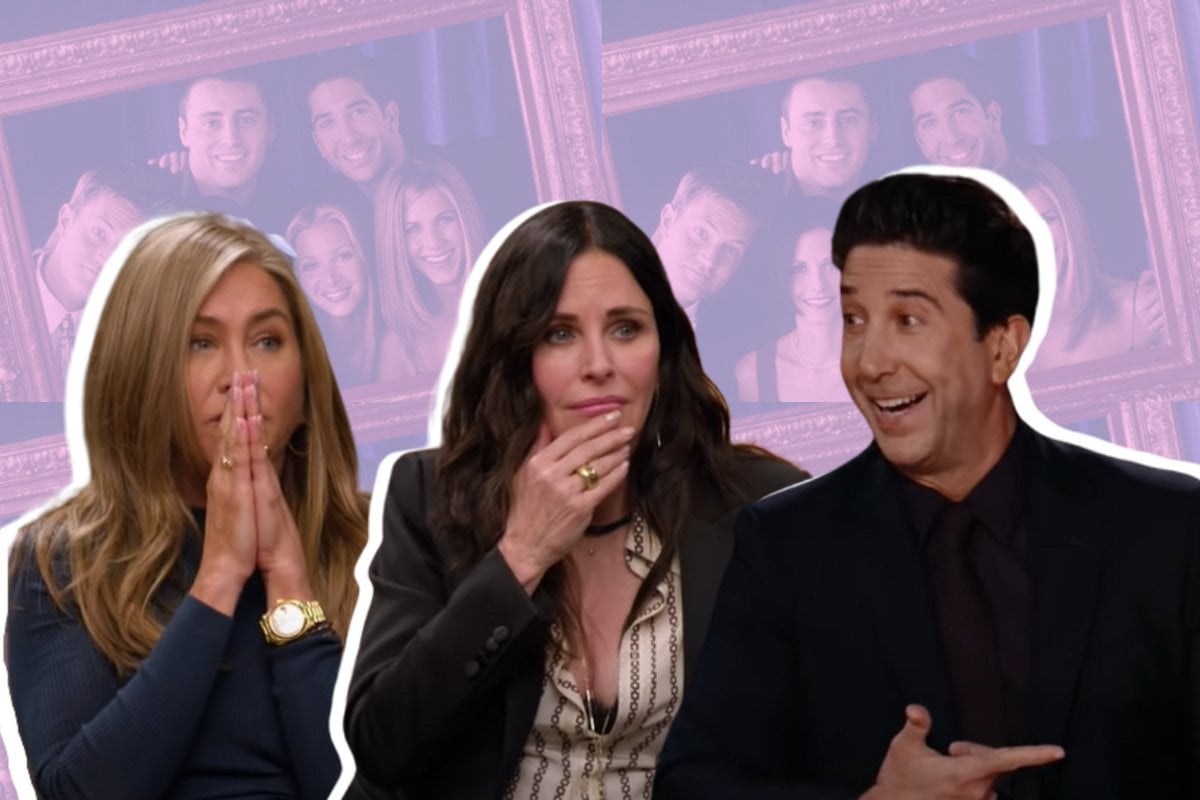 After months of rumours, Instagram teasers and deceptive YouTube fan edits (we've all been there), the Friends reunion special has finally aired. And could we BE any more excited?

Fans will no-doubt remember that the reunion was first announced back in February last year, when the six friends posted to their respective Instagram accounts, "It’s happening".

Now, the reunion has finally dropped in the US in honour of the show's 25th anniversary. And us Aussies were able to watch it for ourselves on the streaming service BINGE.

While the reunion didn't follow the usual format of a regular episode, we still got to see the cast reunite, revisit the sitcom's set and share behind-the-scenes footage (which had us feeling all the feels).

Here's 15 things we learnt from Friends: The Reunion.

1. Since the finale, the six cast members have been in a room all together only once.

The episode opened with this statement, which frankly seems a little rogue as we've left many jobs and seen colleagues many times... But we'll ignore our gut intuition that this means there's been some kind of feud because we want to ENJOY THIS PLEASE.

2. Apparently, the cast made a pact to stop aging all together.

They all look ridiculously good and we're sure witchcraft is involved.

3. Courtney Cox memorised none of her lines, ever.

Matt Le Blanc casually outed that 'Monica' had all her lines written on the dining table or hid a script in the sink because she rarely memorised her lines for the show.

4. The cast nabbed something from the set.

Yep, the cast helped themselves to a little 'souvenir' from the show. And we honestly can't blame them.

Lisa Kudrow took home the cookie jar (of Nestle Tollhouse fame), which we love her for.

5. We now know the origin of the name 'Chandler'.

Every wondered where the name 'Chandler' came from? Because we did. Often. And now we finally know!

The show's producer, Marta Kauffman (of Bright Kauffman Crane), explained that Chandler was a friend of hers and the character 'Chandler' is named after them.

It was only until after the six actors landed their roles, that they were able to meet for the first time.

"The first table read ever, that's the first time I laid eyes on any of you," said Lisa Kudrow.

And in true Rachel fashion, Jennifer Aniston remembers exactly what Kudrow and Cox were wearing.

7. Reese Witherspoon felt like she "won the lottery" when she landed a role on Friends.

"When my agent called me and said, 'Do you want to play Rachel Green's sister on Friends?' I was like 'have I won the lottery?'" said Witherspoon, who played Jill Green.

The actress went on to say that the most exciting part of the show was when Joey asked her character, "How you doin?"

"It was this iconic line, and I was so excited."

"We we're having a tough time finding Monica and we really saw Courtney as kind of a Rachel," said one of the show's creators.

Eventually, Cox explained to them that she saw herself as more of a Monica "and she was right".

9. Rachel was the hardest role to cast.

It turns out finding the perfect 'Rachel' was quite the challenge. Not only was it the last role that was cast, it was also the hardest.

They eventually found Aniston who, just like Perry, was already signed onto another show.

Thankfully, she quickly fell in love with Friends and asked a producer from the other show to release her from her contract so she could be part of the now famous sit-com.

When an audience member asked the actors if there was anything they didn't like about the show, we certainly weren't expecting David Schwimmer to say his... monkey, Marcel.

"I loved the monkey," said Aniston. "Yeah, because you didn't have to touch it," quipped Schwimmer.

While the actor said he "love animals" he would get frustrated when Marcel "messed up" on set and caused the actors to re-shoot their scenes.

Schwimmer also said that Marcel's handler would feed him live bugs, while he was on the actor's shoulder.

"I would have monkey grubby hands all over. It was time for Marcel to f*** off!"

11. Joey had to have his arm injury written into the show.

Remember when Joey ended up having to wear a sling on his arm after falling off the bed?

Well, that was all because Matt LeBlanc injured his arm while filming a scene on set.

"I went just to jump over the coffee table and somehow tripped and my legs went up in the air. And my shoulder came out of the socket," he explained.

12. They would do a huddle before every episode.

Before filming every episode the six actors would do a big group huddle on set.

Interestingly, they did a huddle every time except the day that LeBlanc injured his arm... which sounds seriously suspicious.

"After that, we always did it," said Kudrow.

Perry said he needed the audience's approval so much, that if he didn't make them laugh, he would "freak out".

"I felt like I was going to die if they didn't laugh," he said.

"And it's not healthy, for sure. But I would sometimes say a line and they wouldn't laugh and I would sweat, and go into convulsions. If I didn't get the laugh I was supposed to get, I would freak out. I felt like that every single night."

14. Chandler and Monica were meant to just be a one-night fling.

We seriously can't imagine a world without Chandler and Monica. But according to the show's creators, their relationship was only meant to be a casual fling.

"The original plan was that they would sleep together in London. It was a brief thing and we would have some fun with it afterwards," said one of the show's creators.

But after they say how the audience reacted to their relationship, they decided to make it a longer story-line.

15. Ross and Rachel had a crush on eachother in real-life.

It turns out, Jennifer Aniston and David Schwimmer had a "crush" on each other in real-life.

"Yeah, in the first season we… I had a major crush on Jen," said Schwimmer, before Aniston added that it was "reciprocated".

At least, we'll always have that!

Friends: The Reunion is available to stream now on BINGE.