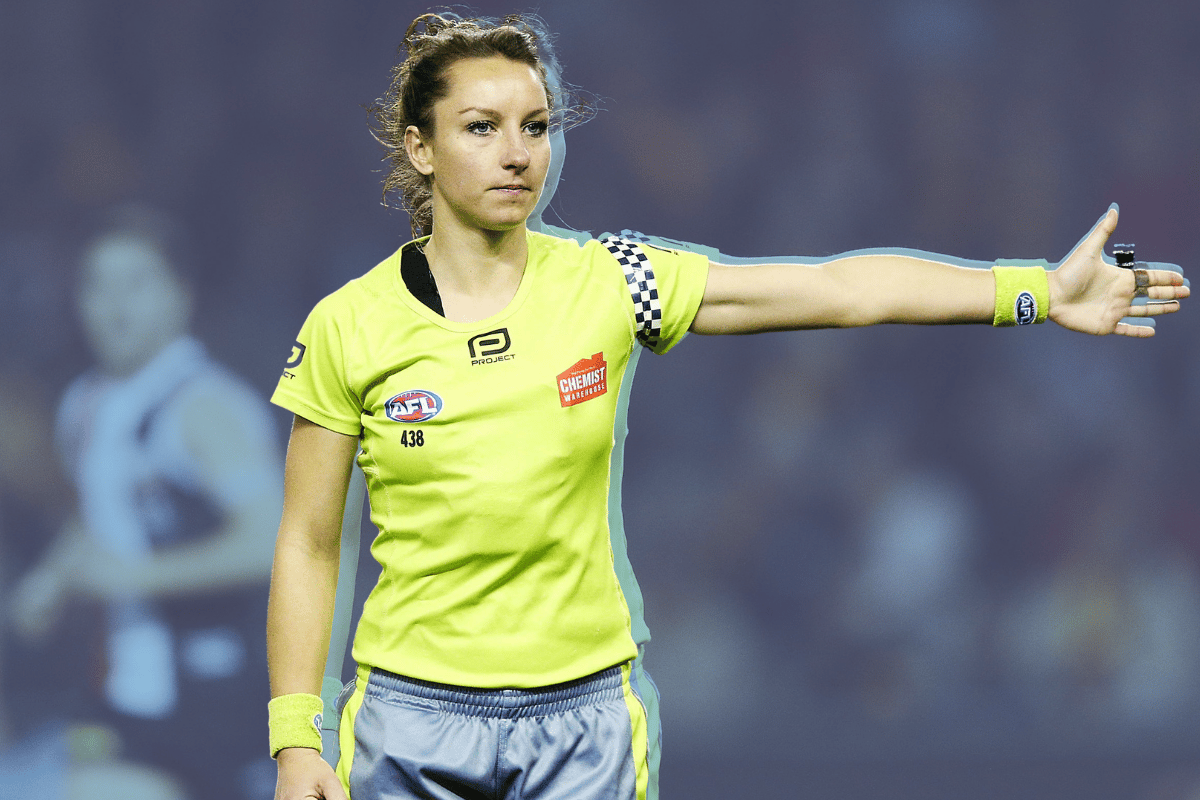 "Have you seen her tits?"

"Why don’t you open your eyes instead of your legs, you stupid s**t!"

"I don't want you to umpire, you're a female, you can't umpire."

These are just some of the harrowing comments female umpires face at work.

Last week, these comments became public when the Herald Sun published a damning new report commissioned by the AFL.

The report, which was initially published back in August, looked at the experiences of women and girls at lower league level to try to understand why female umpires still make up a vast minority in the sport.

It found that female and non binary umpires at both the state and community level face sexual harassment not only from the crowd, but from their fellow umpires and coaches.

Some of the 26 female and non-binary umpires interviewed, recalled incidences of sexual harassment and discrimination, including one woman who quit her job after being sent unsolicited nude photos by fellow umpires.

"I used to receive messages of nudes that other umpires would send to me. And umpires during games would inappropriately touch me, like when we’re umpiring together and things like that. That’s what made me quit," she recalled in the report.

Another said, "I openly overheard a group of guys talking about my boobs at training one night… I was walking up the stairs, and I overheard them being literally like, ‘Oh my god, have you seen [redacted] tits?"

And it's not just sexist abuse women are subjected to.

"When I used to run and I was a boundary umpire, a lot of people used to be like, 'run n****r run!' And they often scream that from the side," an umpire said in the report.

"In reading this research, I felt frustrated that girls and women in umpiring roles are still facing the same obstacles and challenges that I faced almost 16 years ago," she wrote in a foreword for the report.

"I had hoped things would have improved. They certainly should have."

Speaking to Mamamia's daily news podcast, The Quicky, Dr Victoria Rawlings, who co-authored the report, said the findings have "helped people really understand that umpiring is not a safe space currently for girls and women and other minorities."

"In the report there's a whole experience of subjugation or marginalisation or oppression that happens to girls and women and umpiring in many, many different ways."

For Dr Rawlings, there was one story that upset her the most.

"There was a young woman who was a state league umpire, and she had encountered quite traumatic and ongoing neglect of care, and some feedback that really undermined her mental health and wellbeing. And that led to her spiralling in terms of her mental health, and she developed a pretty intense eating disorder [and] some really problematic mental health issues."

Dr Rawlings says her case is a "really good example that coaching has to be holistic and it really has to care for umpires."

Listen to Dr Victoria Rawlings' fully interview on The Quicky. Post continues below.

What needs to change.

To improve the toxic culture of umpiring for women and girls, the report laid out 11 recommendations, including education initiatives, inclusive change room policies and a centralised tool for umpires to report discrimination.

With women only making up 2.6 percent of umpires at AFL level, she says the league has to, "give genuine attention and investment into how do we actually confront these problems.

The AFL issues an apology.

"On behalf of the game we apologise to any woman who suffers harassment or sexism of any kind, and would encourage them to report it to their local club, to their league or to the AFL itself," she said, according to the ABC.

In a separate statement, Rogers said the report's 11 recommendations have "formed the basis for action on ensuring change in our pathways and program."

"I want to make clear on behalf of the AFL that those incidents and those behaviours are wholly unacceptable," she said.

"There are many umpires making a great contribution to football, and our game will be better when there are more women and girls not only in umpiring, but playing, coaching and administrating football. As part of our work we need to develop more programs and initiatives that will encourage and support women to take on these roles."