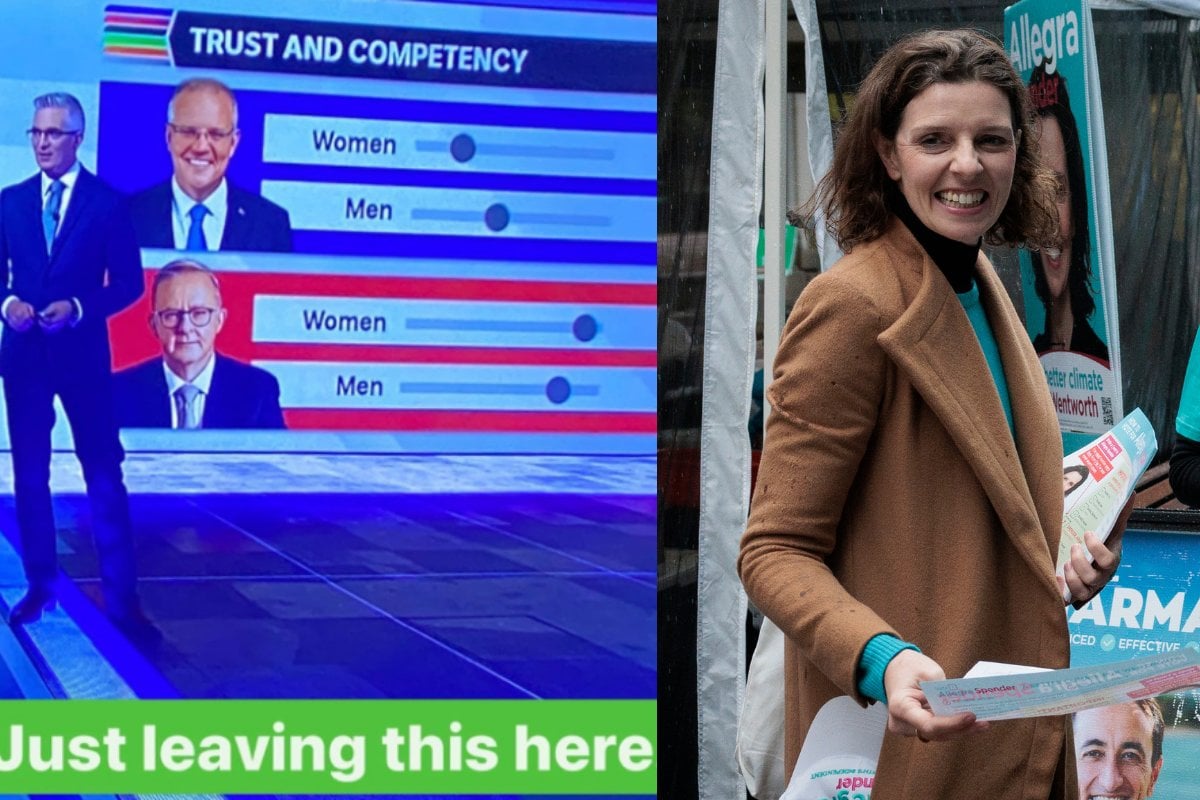 You know what’s great about the election result?

Some women are pissed off about it.

Yes, the female voters roared on Saturday night. Yes, the “stale males” underestimated the volume of our fury. Yes, female candidates will likely hold the balance of power in both political houses. Yes, it’s about damn time. But still, some women are just… not thrilled.

They didn’t want a Labor government. They’re not sure about Teal being the new blue. They’re concerned about taxes and inflation. They’re unimpressed by affable Albo and they are cynical about the idea that everything that ails our toxic political landscape can be swept away in one bright night of tumbling Libs.

Because “the women’s vote” is not one thing. 50 per cent of the population do not all agree with one another. We do not convene at secret meetings sipping tea and spritz, holding hands and settling positions on everything from petrol prices to temporary protection visas to climate action to interest rates.

That’s not how women work.

But until Saturday, you might have been forgiven for thinking that it was.

Because until last night, women were a burden for the government to bear - the much discussed “women problem”. And the “women’s vote” was a monolith to climb, to capture, to own.

I'd like to suggest there's no such thing as the “women’s vote”.

Women just vote. We are half the electorate, yet we are treated like a niche special interest group.

In the past, we’ve been carved up into convenient little demographics based on what we’ve done with our uterus lately. We’ve been marketed to as “Soccer Mums” and “Doctors’ Wives”. This time, there was a lot of discussion about “professional women” and who had "won" them. Political issues have been characterised as "mummy issues" - childcare, for example -and "daddy issues" -like, national security. It's assumed women care about soppy social issues, while blokes do the bean-counting.

Are we doing enough for the women, the major parties ask, as their leader pulls on another high-vis vest.

“Vote for her, she’s a woman,” more than one person I know was urged at the polling booths last week, as if that was all that mattered. Not policy, not position, not values or alliance.

That’s not how women work.

It is absolutely true that the party who listened to women the least lost the election on Saturday night.

The party who steadfastly refused to implement quotas or targets to improve diversity of representation in their ranks. The party that skilled and respected women have quit in high numbers. The one whose boss seemed to view half the population only through the lens of his wife, something that has left him and his party reliant on cheap stereotypes. Women support, men do. Women counsel, men decide.

But that doesn’t mean that all women were cheering for the Opposition. Far from it.

It does mean that women, in all our diversity and complexity, felt overlooked and underestimated. We felt unheard, like we were screaming silent words in a bad dream. Like the boss was deaf to us, even when we were standing right there.

And we were standing right there.

We must have looked cute, 14 months ago, marching on town halls, railway squares and seats of power, waving our witty signs, wearing our suffragette purple, responsibly masking up against a virus most of us hadn’t met yet.

We must have looked, to the men in navy suits who make the calls at Parliament House, like the usual suspects.

Young people. So idealistic and energised. They never vote for us anyway.

The “green-left”. They’re always angry about something.

A smattering of high-profile TV presenters and journalists. Attention-seekers, all.

And then there were the women whose traumatic shared experiences had started it all. They’ll get over it, won’t they?

Those men who underestimated those women weren’t looking beyond the masks and slogans. They weren’t feeling what we were feeling. That this anger and frustration at being silenced and dismissed - it was unstoppable. Empowerment is like that. It’s contagious.

The voiceless frustration was no longer contained to the usual quarters, and this weekend it spread, breaching and blurring the lines between red and blue.

And if we hadn’t been shouted down and talked over and shushed and smirked at quite so much, the men in the navy suits might have noticed we were done pretending we didn’t count. They would have understood that the “women’s vote” is broad and bold.

That women are no longer sitting politely in “mummy issues”.

Women are just voters. You ignore us at your peril.

Women own their own businesses. Yes, it's shocking, Scott, but it's true.

Women are nurses and carers. They’re also doctors and surgeons and specialists.

They are parents and not.

They are partners and not.

They are vulnerable. And not.

They are from every background, every social demographic.

We're everyone and we're everywhere and so don't dare tell us we're special, pat us on the head and ignore what we're really asking you.

The women’s roar heard on Saturday night was not a chant of 'Albo for PM'. It was an insistence to be heard. Respected. Represented.

And now you’ve heard it, it can never be silent again.

T
TanyaF a month ago

Reply
Upvote
You have articulated the situation perfectly Holly!!! I feel SO proud to be both a woman and an Australian since Saturday night. Like I did when I was younger, I feel empowered, hopeful and like my vote can count (even if it didn’t in my electorate).
T
t.souvlis a month ago