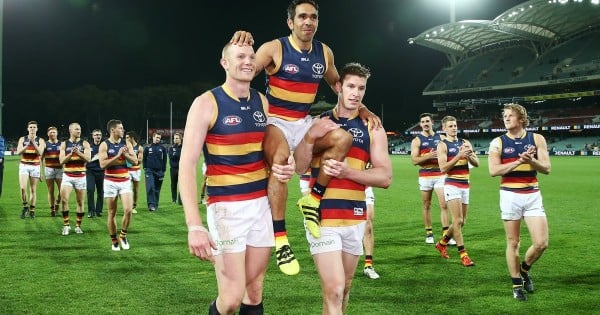 The Port Adelaide fan who was filmed throwing a banana at indigenous Adelaide Crows player Eddie Betts has gone into hiding, but a man who claims to be her father has defended her.

Speaking to an Adelaide radio station this morning, the man, who said his name was Don, claimed his daughter has been “demonised,” and argued that the “racist card” was being played.

‘Don’ said he is yet to speak to his daughter, who is allegedly 27-years-old and lives with her mother. He told FIVEaa radio that he only found out about the incident yesterday, when his older sister called him to tell him the news.

"You won’t believe it, but my older sister rang me yesterday afternoon. I knew nothing about it.

"I knew the incident had occurred, and then there were people that I knew and I said ‘look, show me on the phone’, and there it was — my daughter.

"I am just absolutely shocked. I’m just beside myself. Because it’s just so uncharacteristic. This kid is a beautiful kid.

"She’s very similar to her mother — unassuming, honest. This was so uncharacteristic."

The woman is alleged to have called Betts a 'monkey' as well as throwing the banana, and has been accused of displaying poor behaviour at previous games. In video footage taken of the incident, Adelaide Crows player Josh Jenkins can be seen catching the banana, which was obviously aimed at Betts.

Following the attack, Port Adelaide president David Koch announced: "If it was racially motivated, not only would she be banned for life from the club, we would encourage her to come and sit with our players, our Aboriginal players, and try and understand what these actions mean to them."

On Sunday, a statement said it was "clear that the offender’s behaviour was racially motivated," and the woman was issued an indefinite ban from the AFL. She has since agreed to participate in the club's Aboriginal cultural awareness programs.

But the man claiming to be her father says there's "no way in the world (it was premeditated)."

"Unless my daughter was on drugs overnight, no way in the world.

"I accept that (throwing objects at players is wrong), but don’t demonise someone. The thing that irritates me the most is that we’re playing the racist card here. It was more an act of frustration than a racist act where she’s thrown a banana.

"This is called media rubbish. Why do you people sensationalise things?

"(Should she be banned) totally? No. In this country, the law says you are innocent until you’re proven guilty. Sure, she’s committed an act. Why not give her the chance to explain?

"I haven’t spoken to her, because I can’t get hold of her. She has been ripped apart by this.

"Believe me, if you knew the young lady, you would say ‘what a shame’. If my daughter was a ratbag … I wouldn’t do what I’m doing. I know what this kid’s like."

After witnessing the event, one spectator wrote on social media, "This happened in the row in front of me. I am proud to say that I yelled at her and told her she took it too far."

"She responded by saying, but he’s a monkey. I yelled back, no, ur (sic) just a racist.

Indeed, ever since the attack, where Betts was celebrating his 250th AFL game, fellow players, clubs, the Stadium Management Authority and Premier Jay Weatherill have spoken out against the spectator's abhorrent behaviour.

Absolutely disgusting! Shouldn't ever be allowed back into enjoy the football. Very disappointing. https://t.co/F6uzjvvFWK

As for the idiot who thought throwing a banana was funny, it wasn't. It appears this was just a particularly nasty form of racist comment.

In a statement on Sunday, the club said: "As part of this program Port Adelaide’s Aboriginal programs manager Paul Vandenbergh and the club’s seven Aboriginal players would educate her on cultural issues that continue to have an impact on the Aboriginal community today and the hurt which actions such as hers cause others."

Throwing a banana at black football players has long been understood to be a racist attack, ever since the 1970s and '80s, when the act became notorious in Europe and England.

As a port adelaide supporter
This child, she is no woman, does NOT speak for all of us
She is a disgrace to the club
Im ashamed she is wearing the port colours

Regardless of whether or not it was racially motivated it was incredibly childish. 27 years old? Grow up and take responsibility for your actions. No matter what the reasons were it was a pathetic act.