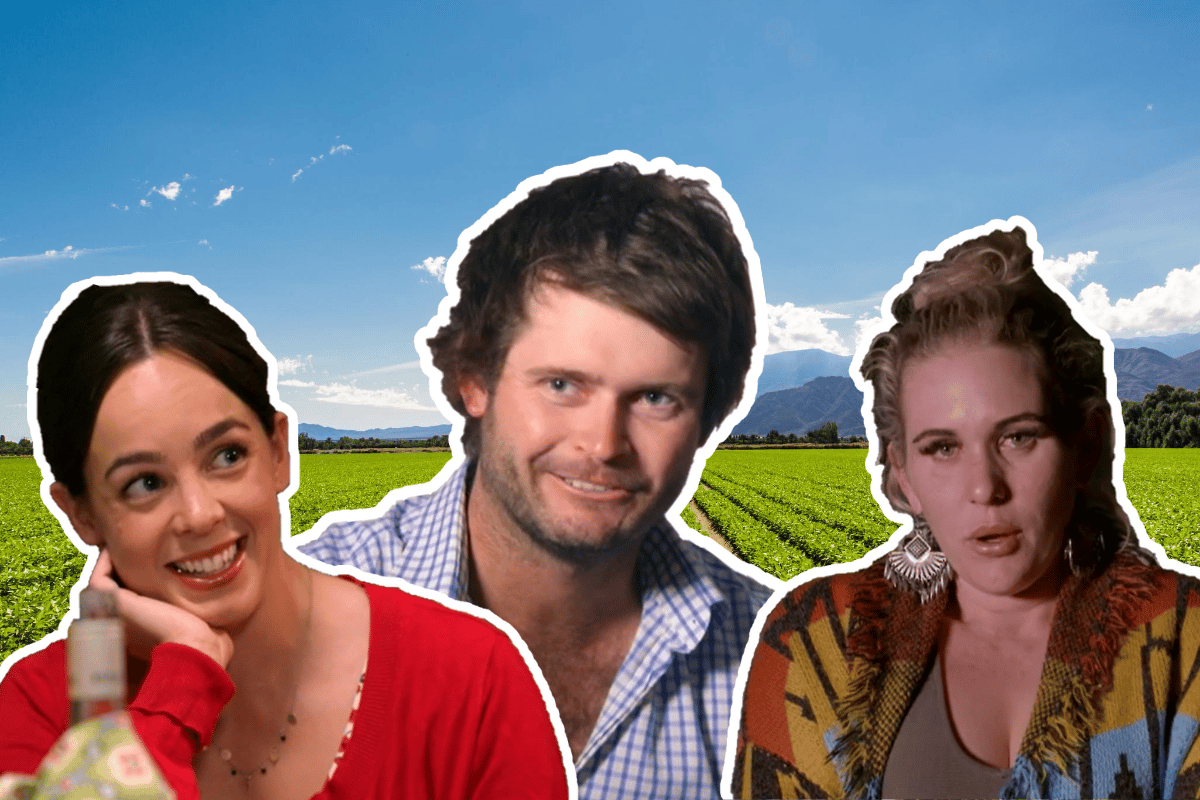 PULL UP THE TRACTOR.

We open on the farmers driving their number one wives to their farms. The women are very excited but also they're kind of missing shops, and restaurants, and... water.

Once they arrive at the farms, the farmers decide to organise dinner for their wives.

This is the exact moment one wife realises she's accidentally moved in with her mother-in-law. 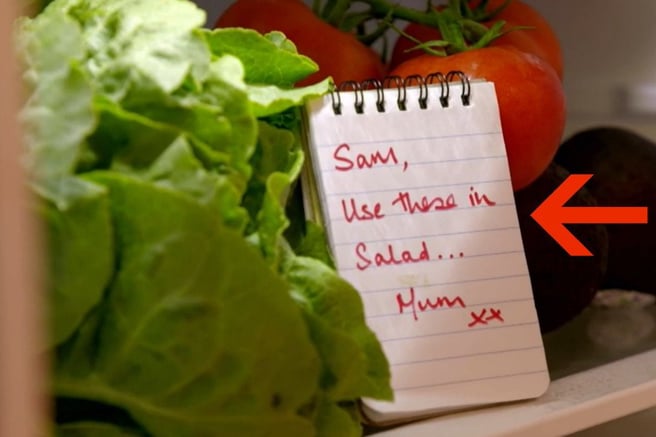 Farmer Neil makes a chocolate fondue for Chantelle (bless him) and then tells her most of their dates will probably just be a steak at the pub. Chantelle says she loves a chicken schnitty and same.

Farmer Nick takes Liz to a local restaurant. Over entrees they settle on having 3-5 kids in the next six months.

Farmer Harry says he's going to get his "lil bit of a roooomantic on" by cooking a roast lamb for Maddison. 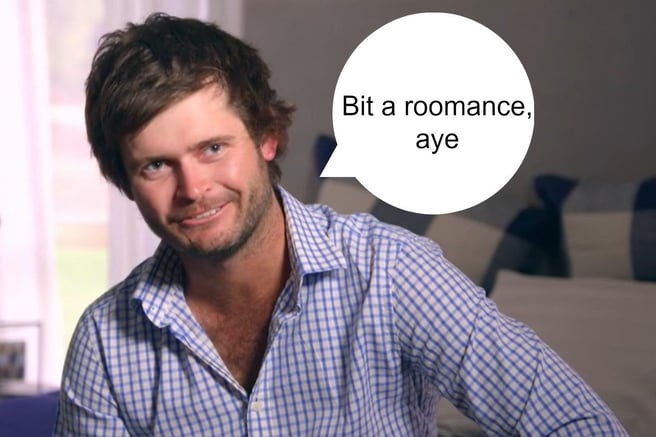 Over at Farmer Sam's, he's managed to assemble the salad ingredients his mother left for him.

Sam and Sophie are just sitting down to a nice meal of lettuce and tomato when there's a knock at the door.

The Italian mother-in-law is here and she's brought a lasagna that could feed the entire cast and crew. 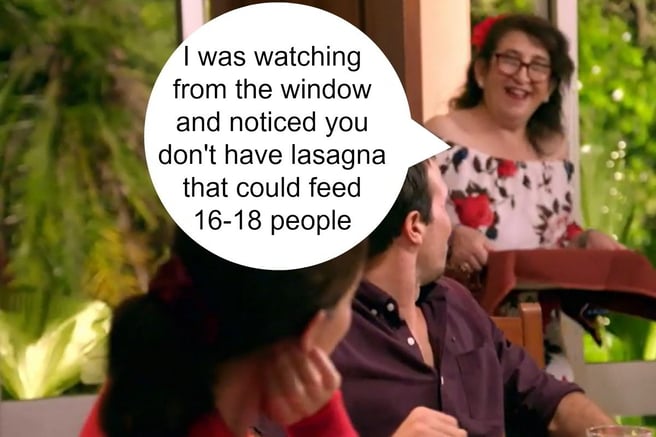 "This should keep you going for the next 26 minutes.' 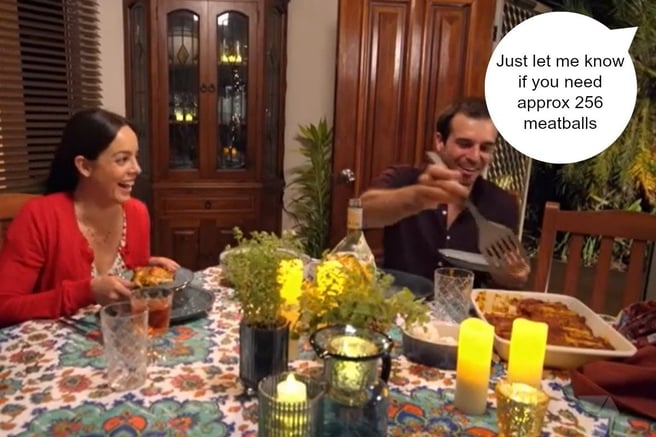 Over at Farmer Alex's, it's raining in Cunnamulla/the Channel 7 interns have been very busy throwing buckets of water off the roof. It's very romantic and Alex and Jess have a lil kiss before Jess remembers Alex's three other wives are turning up tomorrow.

The next morning, Alex says he'll whip up some sangas for Jess as the other girls head towards the farm. Henrietta asks whether anyone has seen Wolf Creek and so true.

The rest of the wives arrive at their farms, and make bunk beds and get stuck into some activities.

The farmers take their wives out to the paddocks (?) to see who's willing to get their hands dirty and pitch in.

It's not all chocolate fondue nights and Italian nonnas watching you from the bushes on the farm.

Chantelle is worried she might have too many sheep in common with Farmer Neil and that he will friendzone her and just want to chat about said sheep. Ah yes, we've all been there. ¯\_(ツ)_/¯

After they've thrown some hay and chased some sheep around (?), the farmers announce to their wives that they have a special letter.

The letter says they can send someone home tonight if they don't think they'll make a good enough farmhard wife.

The farmers have a think and then Liz does a bit of a yell at Neil because his cabin in the woods isn't very child friendly. She's 34 and she's sick of not being able to yell at men about their non-child friendly cabins in the wood, ya know.

Chantelle is worried about the sheep again.

Over at Farmer Harry's, Madison disappears mid-dinner. She says her walls are still up and she's a bit worried about being involved in a 5-way marriage.

Farmer Alex, Farmer Sam and Farmer Nick decide not to send anyone home.

After a roooomantic think, Farmer Harry decides not to send anyone home too.

Strewth, after a paddock think, Farmer Neil decides to send Chantelle home. He'd still like to help her with his sheep though.

He explains it just "got to the point where it was just two blokes leaning over a fence having a chat about the sheep". 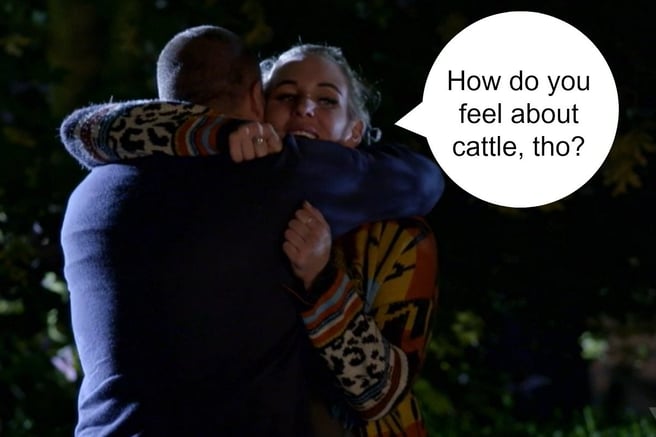 Chantelle takes it like a legend and says she's just going to keep trying until a man can love her, sheep and all.