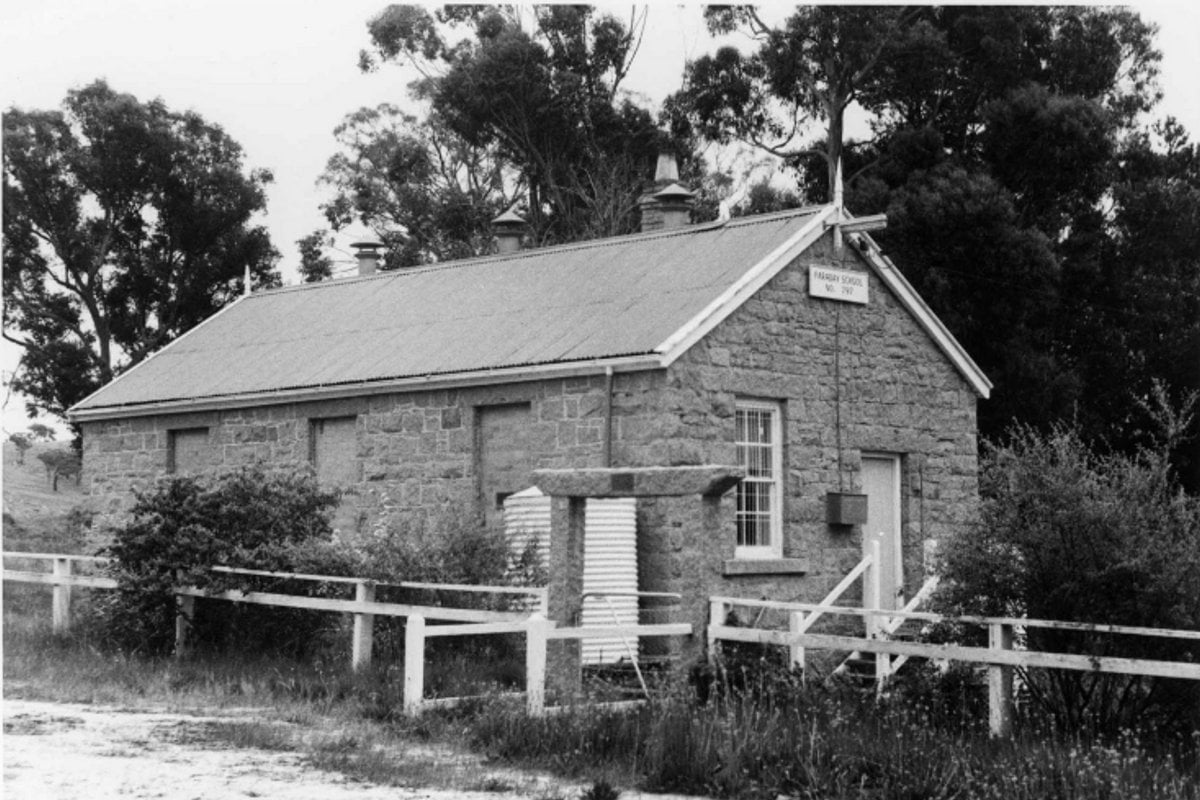 Journalist Wayne Grant was first to learn about the kidnapping at Faraday State School. It was around 4:40pm on Friday, October 6, 1972, when his phone at Victoria's The Sun newspaper rang.

A man spoke. "I'll say this only once. I've kidnapped the pupils and the teacher from Faraday State School."

The caller detailed his ransom, said a note was in one of the front desks in the classroom, and then hung up.

There were only seven students in class at Faraday State School that day; the youngest aged 5, the eldest 11. Four others were off sick.

That was the sum of the tiny Calder Highway town's student body. The schoolhouse was a single granite building constructed in 1869; its staff, a sole teacher named Mary Gibbs.

Miss Gibbs was playing a game with the students that afternoon, shortly before the final bell, when two men burst through the door. Edwin Eastwood and Robert Boland. One was armed with a sawn-off rifle and disguised behind a balaclava, while the other wore dark glasses and a hat.

"There's no more school today, kids," one said, before herding the stunned children and their teacher into a red delivery van and tearing off into remote bushland near Lancefield.

By the time Wayne Grant received the call and raised the alarm, parents had already done the same. They'd arrived for pickup to find the classroom empty. Miss Gibbs' Holden Torana was parked out the front. 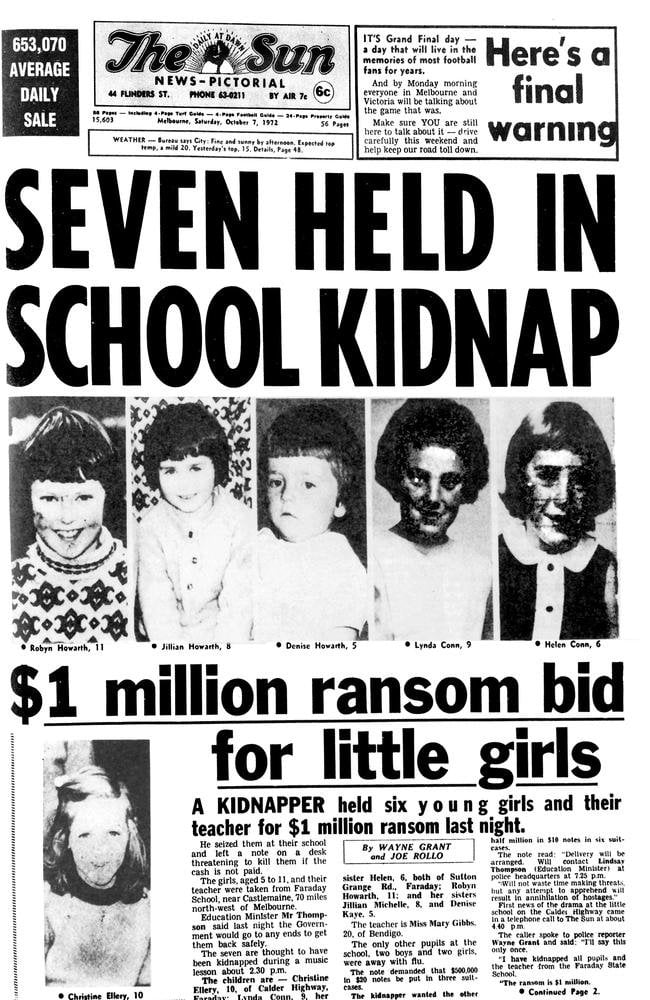 "We are not going to waste anyones [sic] time by making idle threats," the note read, "so we will cut it short by saying that any attempt to trace us or apprehend us will result in the annihilation of every hostage."

In accordance with the kidnappers' instructions, Victorian Education Minister Lindsay Thompson was taken to meet them with the cash at Woodend Post Office in the early hours of the following morning.

Assistant Commissioner W. D. Crowley posed as Thompson's ministerial chauffeur and carried a pistol concealed in his trousers. In the rear of the car, future Chief Commissioner S. I. Miller lay concealed under a blanket clutching a high-powered rifle.

"The quiet was almost unnerving and the pre-dawn darkness made it all quite eerie," Thompson told Rollo in 1989.

"Not quite sure what to expect, I kept going through a plan of action, in case the kidnappers tried to grab me.

"I felt like the loneliest man in the world."

But the pair never showed. According to The Age, prosecutors later stated they'd feared a trap and abandoned the attempt, fleeing to Bendigo.

Listen: True Crime Conversations delves into some of Australia's most infamous cases, with the people who know them best. Post continues after podcast.

Hours before the scheduled ransom handover, Eastwood and Boland left Mary Gibbs and the children in the van. When they didn't return by dawn, the teacher took a brave shot at escape using the heels on her knee-high, leather boots.

"I thought it is now or never and began kicking at the door," she later told The Sun.

They stumbled through the bush where they came across rabbit hunters. After 17 hours, they were finally safe.

The kidnappers were caught days later following a wide-scale manhunt and identified by Miss Gibbs.

Eastwood was sentenced to 15 years behind bars and Boland to 17.

In January 1973, Mary Gibbs was awarded the George Medal, one the highest recognitions of civilian valour awarded in Britain and the Commonwealth. The announcement read that Gibbs "displayed courage, coolness and initiative of a high order and, by her example and leadership, kept the spirits of the children high".

On December 16, 1976, Eastwood escaped Geelong Prison in a stolen car and drove to Wooreen State School in Gippsland, Victoria. 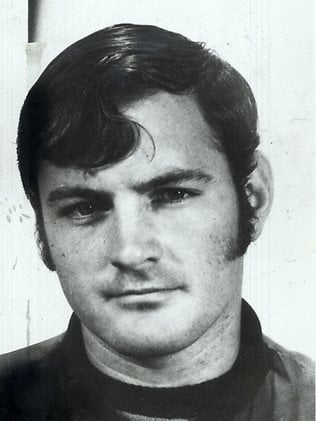 Armed with a gun and clad in a balaclava, he stormed into the school's grounds during morning recess, chained up its nine students and their teacher and forced them into the back of a van.

The teacher, 20-year-old Rob Hunter, was just nine days into his first job.

Before leaving, Eastwood scrawled a fake note in capital letters onto a piece of cardboard and stuck it to the classroom door. He hoped it would appear to be written by Hunter and divert anyone who stopped by. "Gone on a nature study trip. Be back in one hour."

Then he fled with his captives.

Driving recklessly, Eastwood crashed the van into a truck and took its two occupants hostage, along with four other unwitting people who'd stopped at the scene of the crash. A total of 16 prisoners.

He posted a ransom demand to Victoria’s education minister that was even more outlandish than his last. He called for an arsenal of guns, US$7 million, 100 kilograms of heroin and the same amount of cocaine, a late-model car with a full tank of petrol, and the release of seventeen inmates from Pentridge Prison.

Awaiting its delivery, Eastwood held the group at a bushland campsite overnight, until one of the truck drivers, a hero named Robin Smith, risked his life to escape and raise the alarm. When the criminal realised the absence, he forced his hostages back into the van and attempted to flee with them once again.

A high-speed pursuit ensued, with police firing at the van's tyres. Eastwood shot back, but the authorities managed to stop the vehicle and apprehend him.

That November, Eastwood was returned to prison for 18 years. He was released in 1993.