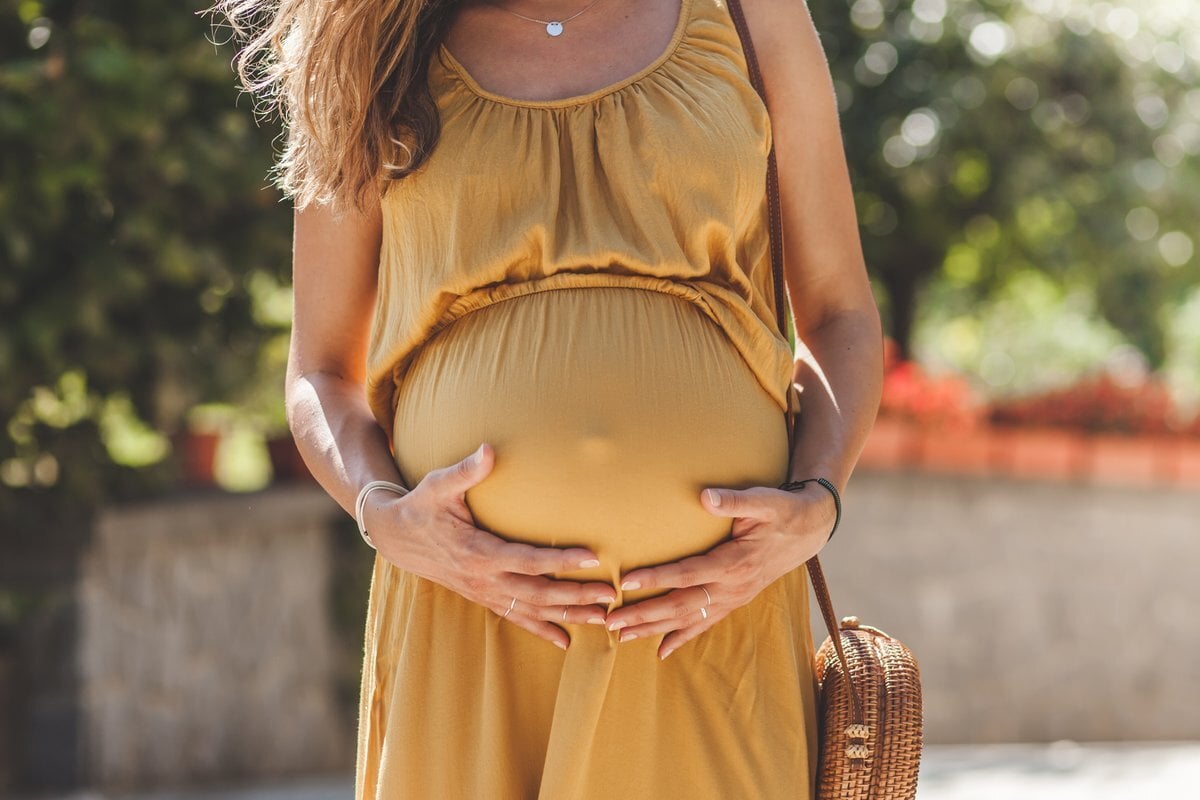 Please note that the names in this article have been changed for privacy reasons. It discusses themes of pregnancy and mental health. If you or someone you know needs support, please call Lifeline on 13 11 14 or call 000 in an emergency.

I first ‘met’ Sarah* in March 2016 on Facebook, through mutual friends. She sent me a DM, and we got chatting.

In January 2017, after months of messaging back and forth, we decided to meet in person as she was visiting the city I lived in.

It was nice to have a new girlfriend in my life. Sarah and her partner came back to visit again in April and June 2018. I was their local tour guide taking them out to restaurants, the beach, shopping and to well-known attractions.

Watch: Mamamia confessions -  The silliest thing I've had a fight over... Post continues below.

As most friends do we opened up to one another and supported each other through difficult times.

In May 2018, she posted an Instagram story of her sitting in a hospital waiting room. When I replied with concern, she wrote back: ''I think I'm pregnant''.

An hour later, she confirmed it. She was six weeks gone. Not only was a first person she told, but she informed I was soon going to be ''Aunty Nicole".

We spent the next few days discussing how she was going to tell her partner and family, agreeing it needed to be simple and personal.

When her partner found out, he wasn’t sure whether he wanted to keep the baby but, Sarah told me she was happy to raise it on her own.

By the 13 week mark, I was sending her messages telling her that her baby was the size of a lemon, she’d send me daily bump update photos, we’d laugh about her weird cravings of pickles coated with peanut butter and the emotional rollercoaster from hormones.

I’d research foods she should avoid, she kept me updated with information from her obstetrician and I even helped her with ideas on how to announce her pregnancy on social media.

When Sarah and her partner last visited in late June 2018 (a week after my 27th birthday) she was stressed, exhausted and they were constantly fighting.

I tried to support her the best I could. I even made her a self-care box filled with everything you could imagine from a face mask, colouring-in book, earrings from Forever New to a photo of us from the last time she visited.

It was a Thursday night, and the three of us went out for dinner.

When the $85 bill arrived, they both said that they didn’t have enough money on their card, so of course I paid and they said they were going to pay me back.

Naively, this happened again the following day with $100 worth of supplies I got Sarah* for her small business. She promised to transfer the funds into my account.

For months I followed her up on it only to be met with excuse after excuse.

We’d go shopping for baby clothes, I was invited to her baby shower; she posted photos from her maternity photoshoot and the nursery she had made for the baby (which we now knew was going to be a girl).

Although we had been talking for years, I had only met her a few times in person. She was not only labelling me as her “best friend” but asking me to be the baby’s Godmother which, I thought was strange.

I’m not one for conflict so after her last visit I became distant, and the messages became less frequent.

I felt frustrated over the money she owed and uncomfortable with how she viewed me and our friendship.

When her due date came and passed, people began to wonder when was this baby coming? I even joked about her being "over-cooked".

Sarah posted on social media revealing that her doctors had got her due date wrong.

In March 2019, Sarah wrote a post on Facebook. I only had read the first two sentences and my stomach dropped.

Sarah was stating that she had been dishonest for the last nine months by convincing everyone she was pregnant.

"There never was a baby," she wrote.

I ran upstairs shouting in utter shock. I didn't know whether to laugh or cry. In the end, I fell to my knees and sobbed.

It felt surreal, like something out of a movie. I felt like I was grieving for someone I thought I knew. Grieving both for a close friend and a child I thought existed. I felt stupid for trusting in her. Looking back at all the conversations we had together I questioned was any of this real?

I typed “12-week baby ultrasound” into Google images and there it was - the exact same image she used for her pregnancy announcement, an ultrasound which she had printed, framed and had presented on her mantelpiece.

For days I had to keep reminding myself again and again that there was never a baby. It was mindboggling.

This wasn’t just about deceiving me, somehow she had lied to her family, friends and even her partner. Had he not gone to an ultrasound appointment with her, not even once?

I went through every emotion, from anger to sadness.

It was possible that she had wanted a child so badly that she had created one, almost believing the deceit herself.

Sarah ended up blocking me on all social media. I know she wasn’t in a space mentally to give me an explanation and I don’t think she even had one herself. But I would have liked a conversation at least.

Three months later in June 2019, Sarah* sent me a text message saying sorry, telling me she and her partner had now broken up.

I respected Sarah for telling the truth in the end as she could as easily have lied again to cover it up. I wish her all the best for her future and hope she has been able to receive the support she deserves.

Reply
Upvote
I worked with a girl who clearly was not pregnant but she showed up to work after a 3 day weekend claiming she had just given birth.  Nobody ever saw the baby.  I wrnt to her apartment once and there was no babu stuff to be seen.  She was cray cray.
P
Pink Plum 3 months ago

Reply
Upvote
I had a friend who was supposedly there for me during a bad breakup. We were so close, we watched chick flicks together, hung out at her place we knew each other’s moms. I kinda felt safe having a close girl friend I could count on. To get over my break up she introduced me to a guy on FB. We started chatting over emails and WhatsApp’s. He sent me recordings of him playing music and stuff like that. Each time I wanted to meet up, there were excuses.
Until one day the music sent over was familiar. Something didn’t add up, I went to YouTube and realise the music clip had been ripped off YouTube and all the lies started to unravel bit by bit. I confronted my friend and she said that was her, she created a fake email account and all the fake accounts to be this “new guy” that I was chatting with. I was freaked out, how can someone orchestrate such an intricate lie that.  went on for months! FYI she’s not into me, she has a boyfriend at that time. People have their reasons for such actions. For this article I guess it could remotely be because Sarah had a miscarriage and she painted everything well and fine. For my friend, maybe was to cheer me up, but I’m a creepy weird way. We’re no longer friends...but I’m still scarred by it.
News
General
Opinion
True Crime
Politics
Sport
Explainer
Entertainment
Celebrity
Reality TV
Movies
TV
Books
Rogue
Royal
Lifestyle
Beauty
Fashion
Weddings
Home
Wellness
Health
Fitness
Travel
Food
Parents
Before The Bump
Pregnancy
Baby
Kids
Teens
School
Parent Opinion
Work & Money
Money
Finance
Career
Lady Startup
Relationships
Sex
Dating
Separation
Friendship
Family
Real Life
Couples