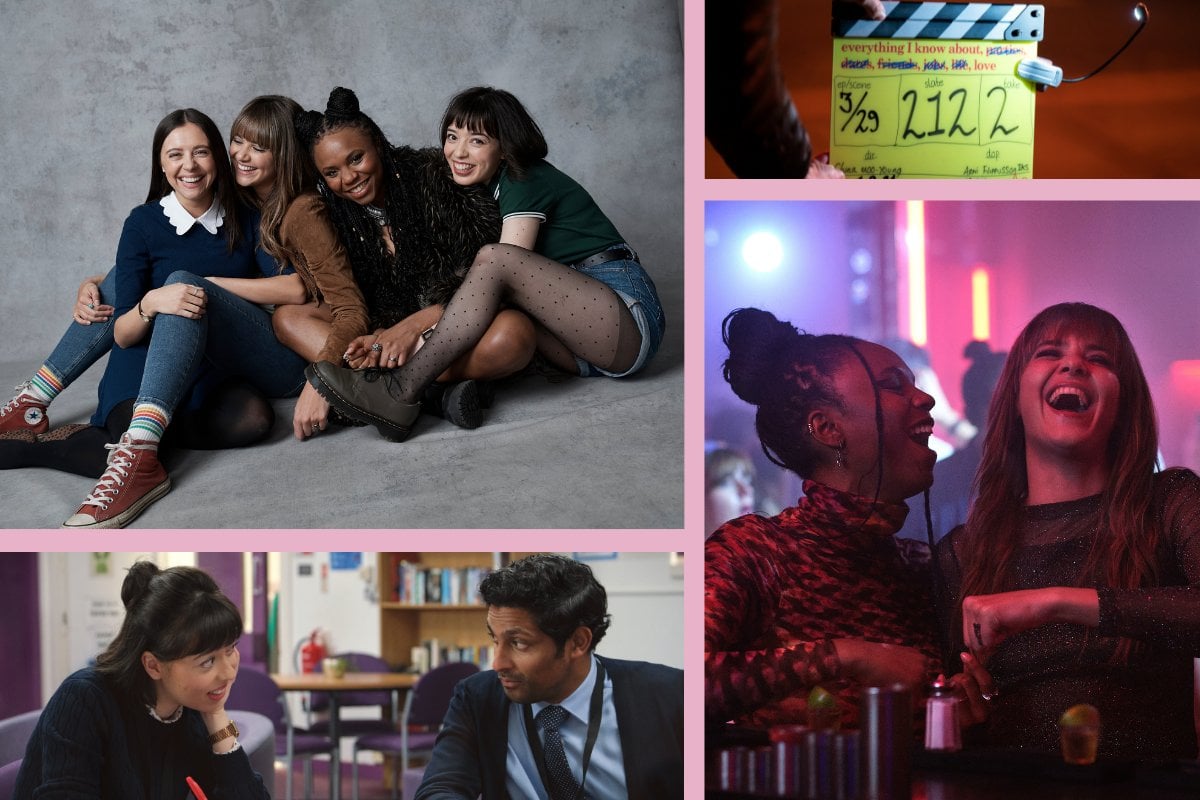 Everything I Know About Love on Stan is the show our group chats will not shut up about. And with good reason.

It's the grubby, funny and unapologetically honest portrayal of your mid-twenties – when your housemates are your best mates, and the focus of your entire being is finding a way to snog a mysterious man with a naff hat.

Watch the trailer for Stan's Everything I Know About Love right here. Post continues after video.

It's a life stage we're either going through, wish we went through, or already did and are now craving a nostalgic look back at.

And that's what the Stan series Everything I Know About Love serves up in spades. Big bucket loads of familiarity, delivered in the form of four best friends – Maggie, Birdy, Amara, and Nell.

...But before we dive in, have a listen to this special bonus episode of The Spill where our hosts discuss the major themes, wins and clangers within Stan's Everything I Know About Love. Post continues after podcast.

For Aliyah Odoffin, playing Amara was her first-ever role – booked in her last year of drama school.

She was in the thick of rehearsals for her final play and received a call from her agent. She took it outside, heard the news, and then walked back into rehearsals where she was practicing a scene at the top of a ladder.

"I was just sitting on top of a ladder processing it all. In my head I was like 'whoa, what just happened?'," Aliyah tells Mamamia.

Whereas Marli Siu, who plays Nell, got the call saying she landed the role while she was wandering down a London high street. "I just immediately went into a coffee shop to buy a cake to celebrate!" she tells us.

The two met each other for the first time for a script read, along with Emma Appleton and Bel Powley, and knew there was instant chemistry. "We always talk about it," says Aliyah. "It was an instant click the second we all came together."

And thank God – because without that connection, the show's main storyline of friendship could have seriously suffered. 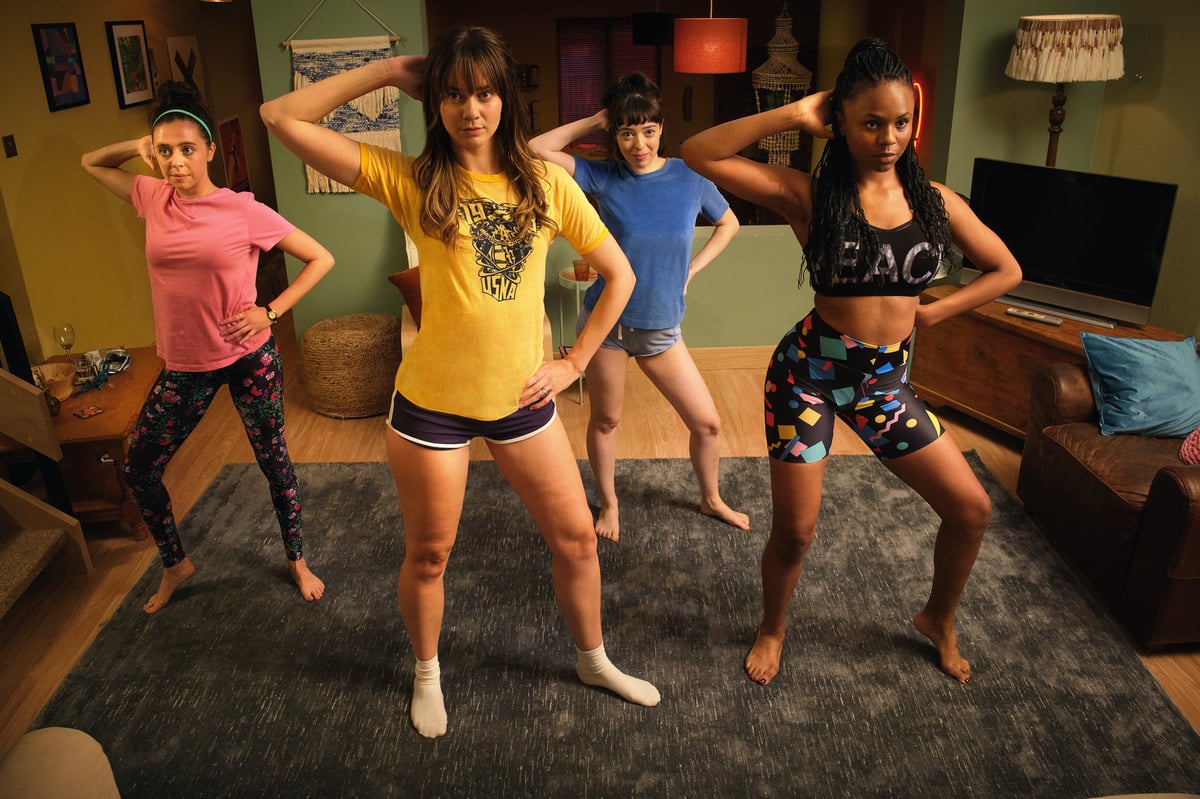 As the show is based on the best-selling memoir of the same name by Dolly Alderton, the characters the four girls play are in fact based on real people. A tricky feat for actors to take up – particularly when the producer of the series is best friends with those people in real life.

"Lucky mine and Marli's characters are actually an amalgamation of different friends that Dolly wrote about in her book," Aliyah explains. "So we weren't verbatim based on one exact character. Instead, we were the best bits and bobs of all her friends."

Marli agreed but admitted she wanted to know more about Dolly's real friends.

"I had ideas of who I thought I was based on, but I was sensitive about how much to ask – because this was someone's real life. I didn't want to push too much and go barging in saying, 'Is this bit real? Did this bit happen?'" Marli explains before admitting that after the show wrapped, she did just that. "Once we watched the show together, I got a lot more comfortable asking those questions!"

And by 'together' Marli really means that Dolly organised a private screening with the four main girls and herself so they could watch it together.

"The first time we actually watched it, we watched it all four of us girls together," Aliyah explains. "There were so many emotions, but you could just hear a chorus of all of us laughing, crying, and screaming. And it was a marathon of every episode, so I don't even think we took breaks to go to the bathroom. It was kind of crazy to do that all in one sitting, but also kind of amazing."

One scene we're sure almost every actor cringes at when watching back is... drum roll... the sex scenes.

And Everything I Know About Love certainly didn't hold back the raunch in this series.

When asked about the sex scenes, Aliyah laughs and says: "Well they were a whole new world. You don't really do that part in drama school!"

She went on to share that her first time filming a sex scene went smoothly because they had incredible intimacy coordinators on set that essentially choreographed the whole thing – so it felt like "another dance scene" to Aliyah.

"Planning the sex scenes became a conversation around what needs to happen to represent this kind of woman in this arena and the best way to show their sexuality. It was actually quite specific in terms of what they were trying to get across," says Aliyah – "But it felt super safe." 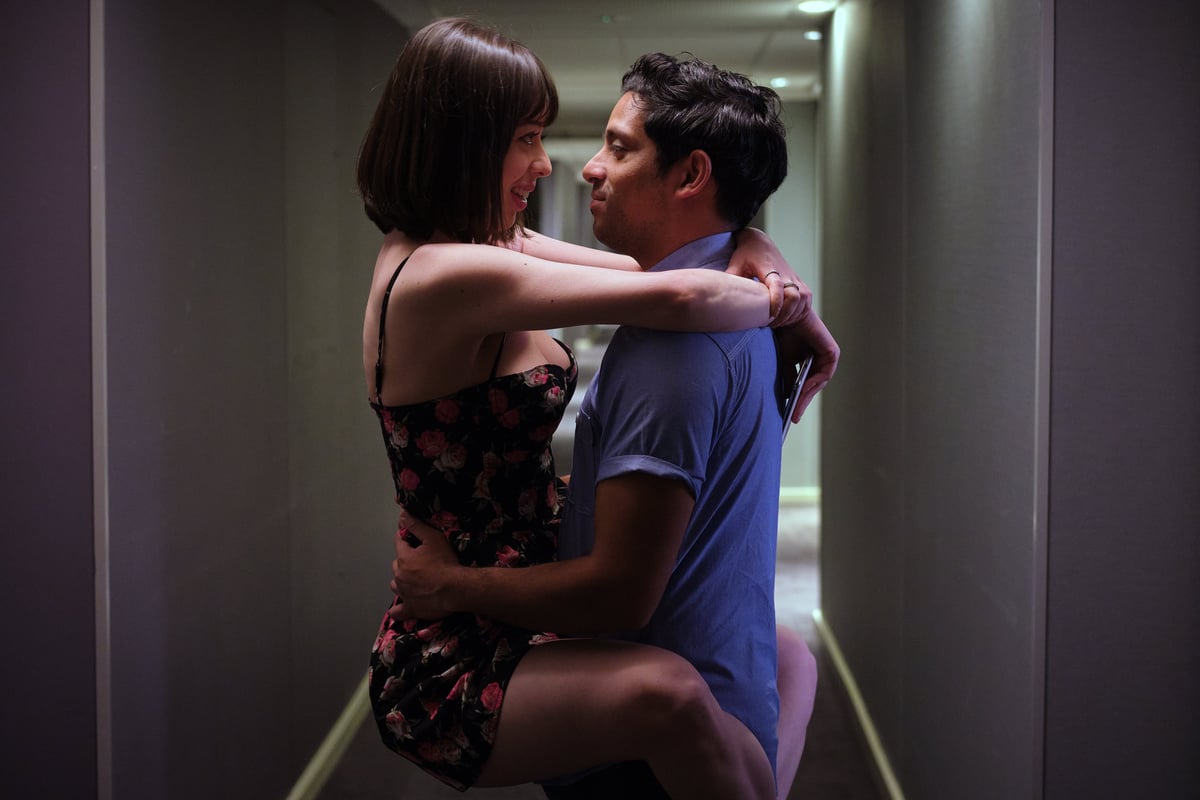 For Marli the filming of the sex scenes wasn't actually that weird, but the rehearsals were.

"Rehearsing [a sex scene] is way worse than filming it, because when the cameras are there you know why you're doing it. When it's not, and you're just practicing, you think 'this is so weird to do'."

But when watching it all back, Marli said she was "actually relieved" because she thought the scenes were going to be so much longer. "It takes half a day to film, so you think it's going to be longer on screen, but then it's about eight seconds and you're like, 'PHEW'."

Now that the girls are in the thick of the show's promotional run, we took the opportunity to ask them how it's been walking red carpets and doing press interviews – especially as this is both Marli and Aliyah's first big promotional tour.

"I've done interviews and bits of press for other stuff, but never on this kind of scale," Marli explains. "This is quite a lot. And it's really fun! It's nice because it's a show I want to talk about and it's girls that I really love personally and love working with too."

Everything I Know About Love is now streaming only on Stan. The book is published by Penguin Random House Australia.