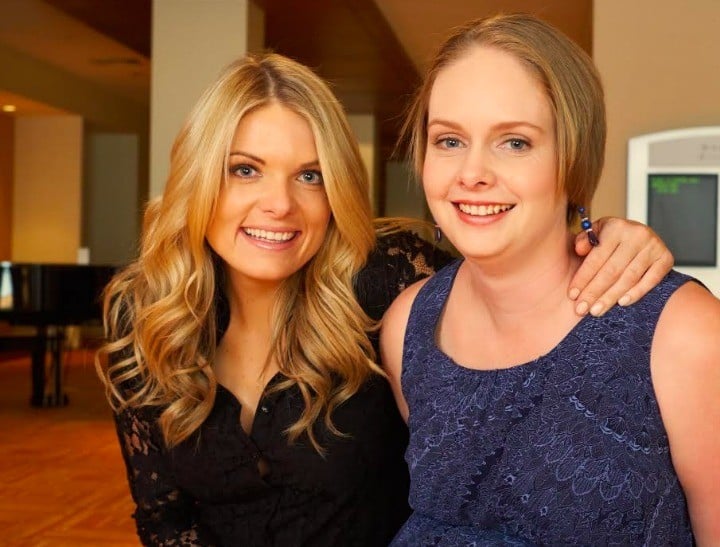 As a journalist I have witnessed first hand some of the most horrific events human beings can be subjected to. The devastation caused by natural disasters; accidents with tragic consequences that no one could have foreseen; diagnoses of incurable diseases where there is no hope, not even a glimmer – where the diagnosis is a death sentence…

I’ve also covered many stories where there is hope – where the human spirit manages to shine above unimaginable terror – where miracles are possible, and where bad news doesn’t have to be the end, but rather the start of a challenging journey.

Erin Molan on her sister: “I wouldn’t have been able to function without you.”

I never thought I’d be doing this kind of story with my big sister, but a few weeks ago I did, on national television, and I did that most unprofessional of journalistic things. I cried.  I’ve never done that before on-air (except when they made me bungee jump, but they were tears of fear, which are totally different!)

I’ve never done an interview like the one I did for the Footy Show on Channel 9. I sat down with my big sis – Sarah Sutton, a 33 year old mother and wife, high school teacher, wittiest person my other sister, brother and I know, loveliest person we know, strongest person we know…

At 28 years old Sarah was diagnosed with bowel cancer.

Bowel cancer is Australia’s second biggest cancer killer – 4,000 lose their lives annually… 15,000 people are told every year they have the disease, but do you know the best thing about bowel cancer? It is not a death sentence – in fact far from it. Ninety per cent of cases can be successfully treated IF it’s detected early enough.

Sarah started to experience symptoms when she was pregnant with her son Angus. She was going to the toilet a lot, and mostly with diarrhea, but she just put it down to changes in her body that come with carrying a child. After trying different diets – including cutting out wheat and gluten – her symptoms weren’t improving. Mum had a doctor’s appointment but gave it to Sars. That appointment would save Sarah’s life.

The experts found hundreds of polyps. Sarah’s bowel was riddled with them, so they removed it entirely. She then went through chemotherapy and radiotherapy.

During her treatment, Sarah couldn’t hold her newborn son, the surgery and treatment made her too weak, and her four-year-old Sophie spent more time in hospitals and treatment centres than any toddler ever should. Her wonderful husband Gavin held the family together, supported by a wide circle of willing and caring family and friends.

I could describe in great emotional detail Sarah’s journey and the difficulties and challenges she faced daily; about the bag she now wears externally because she has no bowel, about having to come to terms with the fact she will have this for life and the fact that every appointment she experiences that familiar niggling anxiety because this might be the day the doctor says the results are not the all clear we hope for.

But the positives are far more exciting and interesting. She’s ALIVE, she’s beaten it, she’s the most inspirational and strong woman I know. We are the LUCKY ones. We caught it late, but just before it was too late… BUT that might not have been the case. Sars could have so very easily just written off the symptoms as pregnancy related and the outcome… well… I can’t even think about it, let alone write it.

In conjunction with the NRL’s fantastic ‘Kick Bowel Cancer’ round, we told our story. We did so for one, and only one reason. And that was to start the conversation. We wanted to get people talking about bowel cancer, and also to act.  Pop along to the doctor if you have symptoms and have them checked – it WILL save lives.

We grow up being told to slip slop slap so we don’t get skin cancer, to check our breasts for lumps that could be breast cancer, to not smoke because we might get lung cancer, but NO ONE talks about bowel cancer, and that needs to change. It’s the second biggest cancer killer, but it doesn’t need to be. And isn’t that wonderful?!

Please get tested. Please don’t ignore irregularities ‘down there’… I know it’s gross talking about bowel movements – but it could save your life!

Click to watch a section of Erin Molan’s interview on the Footy Show below.

I am in the same boat as Aisha now. Although I have IBS too, I now have to be screened every 3 years as my risk of bowel cancer has been deemed much higher than normal. If you don't agree or are still worried after visiting a doctor, then get a second opinion!

A
Aisha Timol 7 years ago

Wow, great story and so brave to tell it - this is definitely something we need to talk about more. I had a brush with bowel cancer too at the age of 32, similar symptoms - and now have colonoscopy every couple of years. Doctors just kept saying I had 'Irritable bowel syndrome' until I insisted on having a colonoscopy. Key message is don't let GPs fob you off - sadly, most of us have to advocate for our own healthcare in the face of primary health care providers who aren't always proactive...