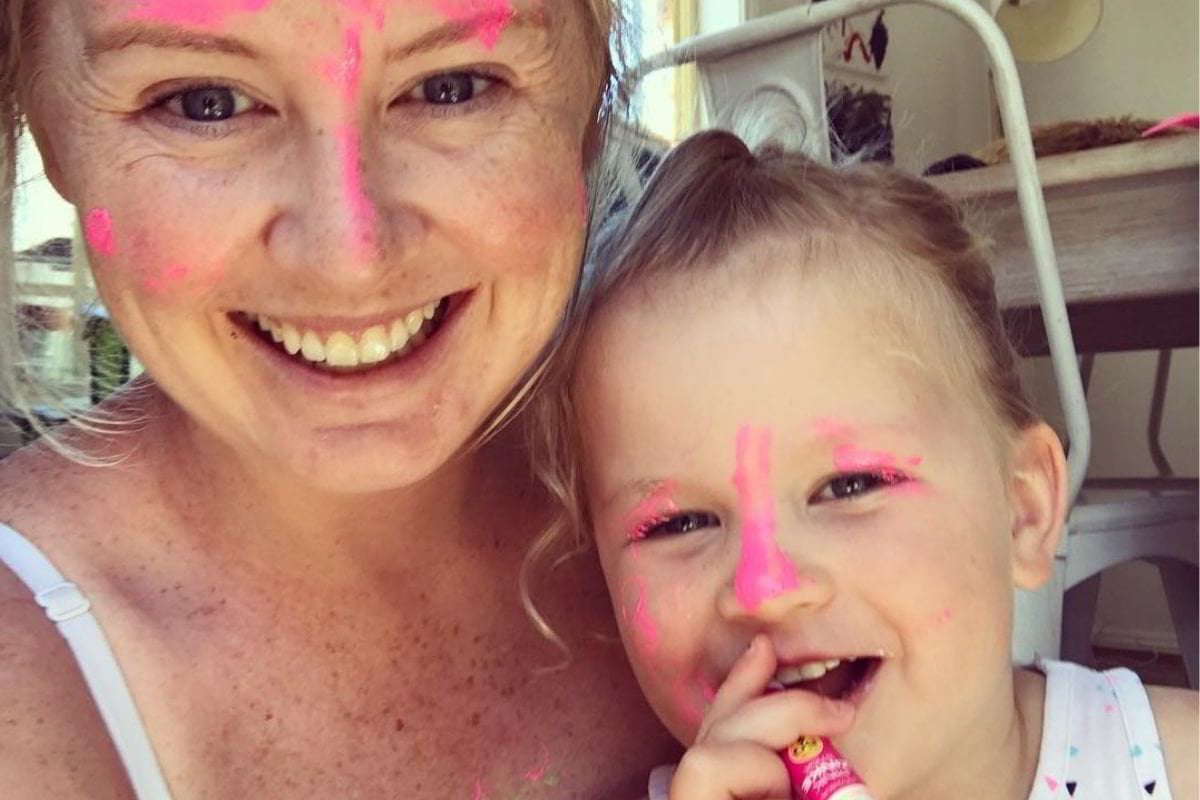 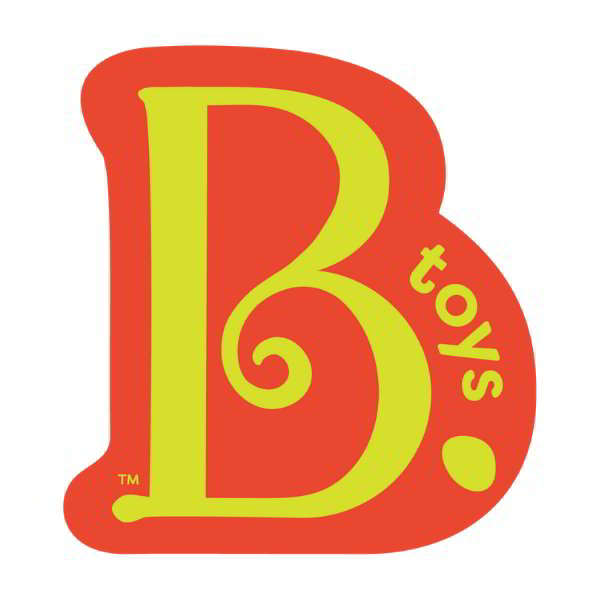 Thanks to our brand partner, B. toys

There are certain parenting moments that are permanently burned into your consciousness.

The first time your baby says your name (or, ahem, your partner's. Thanks for that).

That one time you found them engaged in some beautiful 'creative play' with the $100 worth of brand-new makeup you'd decided to treat yourself with after a particularly soul-stretching week.

Alongside keeping them fed, (relatively) clean and clothed, entertainment takes up one of the biggest slices of the parenting pie. Because kids' imagination and enthusiasm for play is ENDLESS.

My son once told me, upon entering his favourite park, that he was going to 'play so hard he felt like vomiting'. And I think that pretty much sums up the challenge in front of parents - creating experiences that are on par with vomit-inducing, park-based joy. No pressure at all, really.

These are the lessons I've learned over the years about keeping three kids under the age of six entertained (while keeping my own sanity intact - mostly).

﻿﻿1. Structured is great, but the magic happens during the mundane.

With my first child, structured play was my jam. ﻿﻿

I could have filled a Pinterest board with the activities I lovingly constructed for him. Because I had the time and a (slightly misguided) idea that that's what was expected of me as a mum (that's a whole other topic for another time).

Don't get me wrong, he enjoyed those activities. But you know what he liked the best? Taking his trucks in the bath because they needed a 'car wash'. Finding a patch of mud in the garden and excavating it with a spoon. Sitting inside the cardboard box I'd bring our fresh fruit and veggies home in and turning it into a car or a cave or a train for his toys.

Fast forward to my second and then third child and let's just say that structured play was out the window. And you know what? My daughters couldn't actually care less. They are the most creative, wild, innovative little people who will make something out of nothing.

The last time we went camping, my youngest spent close to an hour with a mug full of shells we'd collected earlier that day while walking on the beach. I hadn't directed her towards the activity, she'd sought it out and made it her own.

Giving our kids the space to use their imagination and yes, get a teensy bit bored, is often where the magic happens. 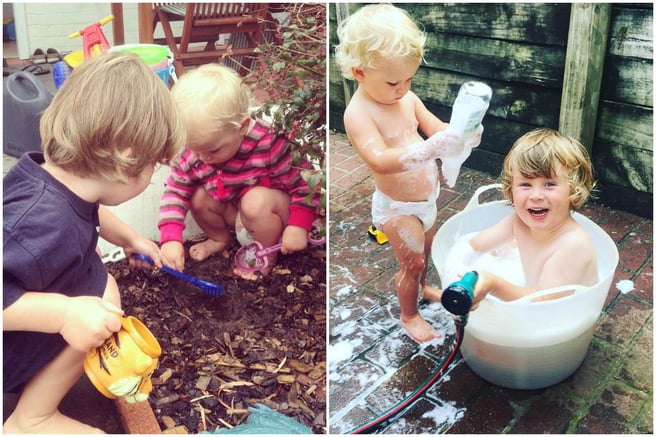 They're pretty satisfied...if it happens to involve mess. Image: Supplied.

﻿2. Never underestimate the fun of the kitchen.

Due to necessity more than anything else, I have always had my kids in the kitchen with me. Whether it was strapped to my back in a baby carrier and observing from a safe distance, sat in their highchairs playing with a bowl of dried pasta or helping with various tasks like washing, grating and blending, they've always been involved.

And they love it. As they've gotten older, my kids have actively sought me out to ask if they can help with favourite recipes. They love rolling out cookie dough or using the food processor to make pesto. As with many (many) activities with kids, you've got to plan ahead.

Certain kitchen-based activities will generally end in tears (anything involving knives or raw chicken is best avoided #lessonlearned), but if you're OK with the mess, keeping kids busy creating something with a tangible result is an amazing way to keep little hands and minds busy. And there's the added bonus of teaching kids a life skill from a really early age. I'll be damned if any of my kids leave home not knowing how to knock up a basic meal from scratch and I assume they'll almost have learnt it being involved in the process, 1000 times, since they could hold a wooden spoon. 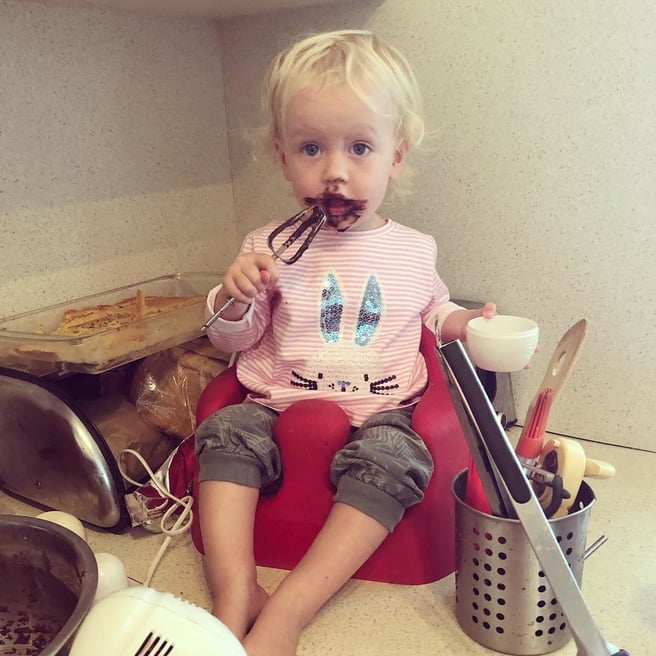 I think she loves the kitchen a little too much. Image: Supplied.

﻿﻿3. Toys are awesome, choose them wisely.

I've had plenty of time to observe my kids' behaviour and attitude towards the toys they own. ﻿

I have been left baffled by their allegiance to certain things and apparent disdain for others (usually the ones that I spent three hours queuing up for at Christmas time).

What I've come to work out however is that certain toys stand the test of time and have been used and loved by all my kids, regardless of age, gender or trends. And those toys are the open-ended, creative ones. The ones that allow kids to use their imagination in a thousand different ways. The ones that are educational, without them even realising.﻿﻿ 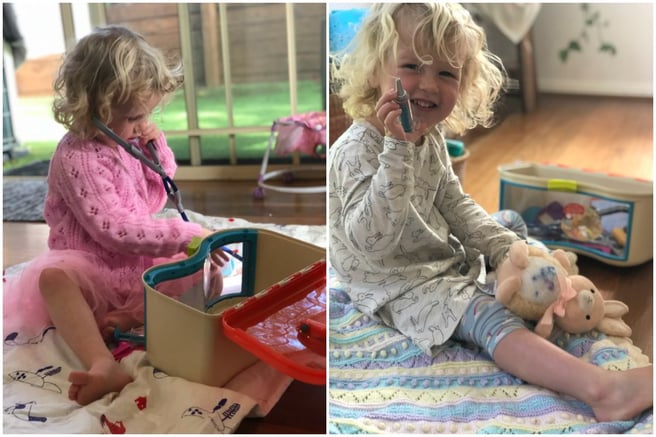 My girls' favourite thing to play with at the moment are the B. toys B.eauty Pops, co﻿﻿lourful beads that can be snapped together to create pretty much anything you can think of. Even my son is happy to get in on the action (though I'm not sure whether a sling shot was the purpose the creators has in mind when designing the kit).

If you haven't checked out B. toys yet, you'll be surprised in a good way. They've got personality. They're educational. They're modern-looking, yet classic in that they're built to last so you can hand them down from one child to another. They're ﻿ also packaged thoughtfully with minimal environmental impact - in some cases they omit packaging altogether. When they use boxes, they use recyclable paper and soy-based inks. So you feel better about getting the toys in the first place, whether for your kids or a gift for others. 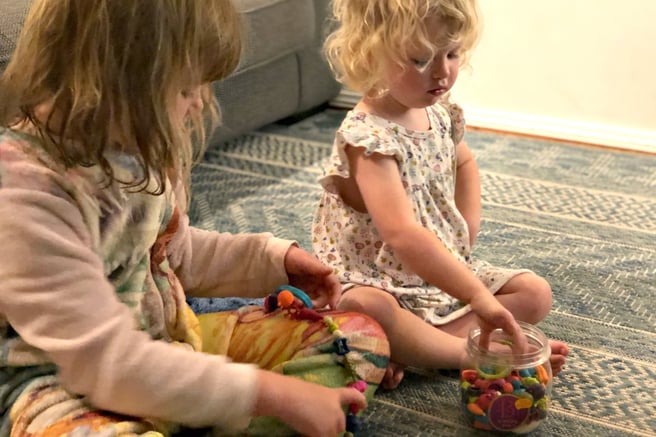 ﻿﻿ ﻿One extra tip if you've got really young kids: keep a selection of their favourite toys in a basket in the kitchen for witching hour. When my kids were younger, I'd pull out the basket and get at least 15 minutes of time to feed the baby/finish the dinner/have the wee I'd been holding for the last three hours. It was like magic. 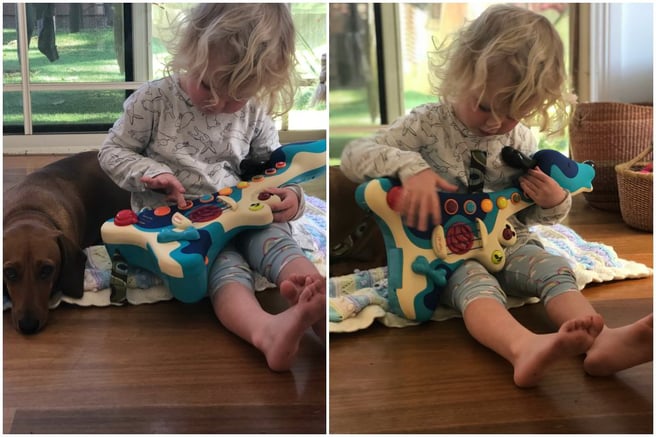 B. toys' WOOFER is a guitar shaped like a dog. Our dog loves it, naturally. Image: Supplied.

A wise midwife once told me, as I held my two-day-old first baby, that fresh air and sunshine always helps.

﻿﻿And it's a lesson I've held fast to throughout parenting all three of my children. The outdoors is an antidote to the worst tantrums, the hardest sleepless nights. Whether it's a park or playground, beach or bucket of water in the courtyard (as you've seen in our photo earlier!). Of course, right now not everyone in Australia can easily get out to a park, so this is very much based on where you live and what the restrictions are. 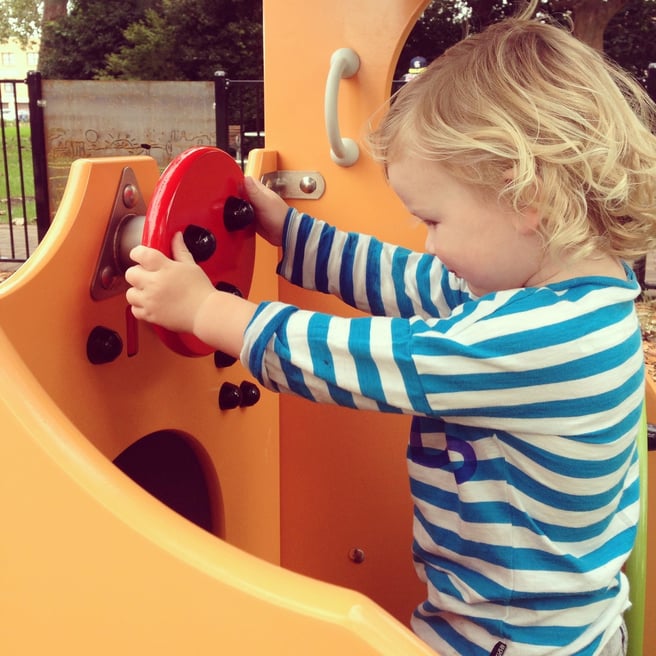 And sometimes, a playground will buy you some chill time. Image: Supplied.

I still have a bag of outside toys that I leave in the car's boot. Buckets and spades, sieves, cups and bowls that have migrated from the kitchen. Over the years various things have been added; rocks, special sticks, cars.

I can pull this bag out and am guaranteed some time to breathe (and drink my coffee). These same toys in the surrounds of home might not be anything special but when they're taken into the great outdoors, suddenly they become keys to a whole new world and one that I reckon I'll be utilising until my kids leave home!

PARENTS. Mamamia has teamed up with B. toys to give you 15 per cent off their range using the discount code MAMAMIA15 on btoys.com.au.

B. toys is also available at David Jones and independent toy stores, and will be in Target this September.﻿﻿

At B. toys, we make quirky and unique toys that will inspire your kiddos' creativity and individuality. Our toys are sensory, educational and of course, fun! But here’s the best part: they can also hold your little one’s attention for a LONG time! And when we say a long time, we mean it. Our toys can be enjoyed by your kids, then given to your sister’s kids, and her neighbour’s kids, and her kid’s kids. Whether your little poppet is practising tummy time, crawling, walking or running, B. toys is here to help with their development...and give you some time to enjoy a cuppa.