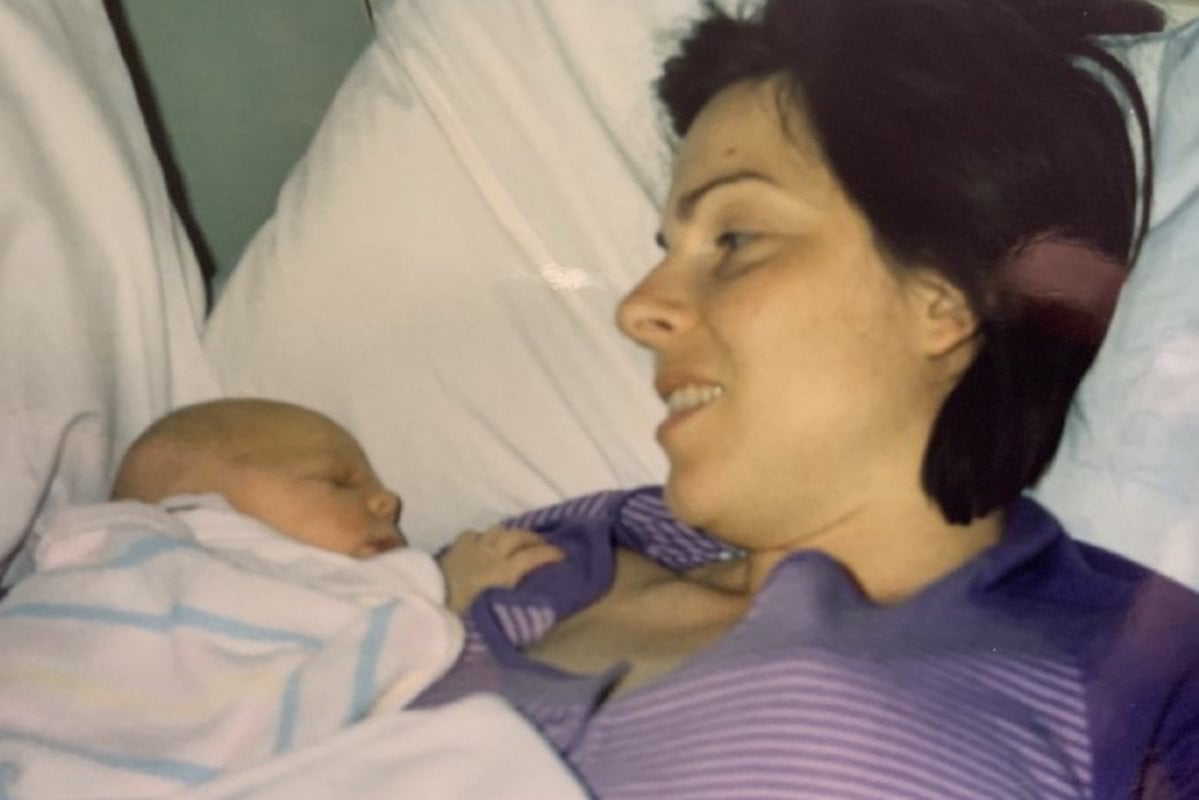 When my son was born 18 years ago, it was compulsory for every single well-wisher to say: ‘Enjoy every moment! It goes so fast!’ I hated them.

At the start, it wasn’t that easy to enjoy any moments and their words were a constant reminder of that.

Fit, healthy me had assumed I’d be terrific at giving birth. I was an efficient and capable young woman. I was good at lots of things, goddammit. But no. Pushing out babies was not one of them. The birth was a sh*t show and my distressed little guy was born by emergency caesarean while I was knocked out under a general.

Thus emerged the persistent inner voice that has accompanied me through much of motherhood: ‘Um excuse me, but really? This can’t be right.’

On my second day in hospital I whined to the midwife that my tea had gone cold while I was trying to breastfeed. “Welcome to the world,” she said wearily. She had zero f***s to give about my cold tea and fair enough too. I mean I guess sustaining the baby’s life should be a new mother’s first priority. Still though.

During prenatal class a few weeks and a whole other life earlier, we had done a ‘newborn calendar’ exercise. It was about coming to terms with how much your daily routine changes with a baby. Every fourth hour was blocked out for feeding the baby and you had to work out how you were going to fit in your other activities. Like feeding yourself. And sleeping. I was appalled.

After taking the baby home, I thought back on that oversized cardboard planner longingly. If only I had three out of four hours without my vampire baby attached to me. Was it possible I was feeding him for five hours out of every four? Usually while hissing at my husband not to blink too loudly in case he startled the baby.

Um, excuse me, can this be right? How was I meant to be enjoying every moment exactly?

For a dance that’s been happening since time immemorial, the first baby-new mum routine sure can be an awkward, inelegant fumble. At least it was for this pair of anxious and fretful novices.

But we found our groove in time. The moments of bliss I’d worried weren’t for me crept up. Leisurely breastfeeding while I watched Dr Phil, hearing him wake from his nap excited to see him again, deciphering the secret language of his first words, stacking little plastic pegs over and over and over in wonder at his growing dexterity. And slowly, slowly, feeling on top of things more often than not.

As I fussed about the right time to give him a sibling a wise friend said “why don’t you just wait until you want another baby?” and lo and behold, the time came when I actually, really did.

When I gave birth the next time around (I cunningly went to a different hospital in the hope it might hurt less, but no) my boy, nearly three, had never had a night without us.

Even as my contractions started I worried about every aspect of how he would go; but there’s nothing like a long painful labour and new baby to take one’s mind off an older child and it was a revelation how fine that was. He didn’t need me agonising over him. He came to visit with Grandma, kissed his brother, put on his new Spiderman suit and we both grew up a notch.

And he just kept on growing up. Relentlessly. My shy little preschooler was always in a nylon superhero suit, hiding in plain sight; then he was off to school and learning to read and do sums and stand up in front of assembly (I was so proud!); then playing soccer where I marvelled at his nerves of steel defending the goals; there were years of craft projects and Halloween costumes and times tables and sports carnivals until suddenly there weren’t; then water-polo where he’d wrestle other fit, strong teenage boys underwater, then all of a sudden that’s over too and the school work is serious and mysterious and it’s tutors and driving lessons and parties.

And now as he turns 18 and we wonder what his adult life will bring, all I want to say to any new mum is, ‘enjoy every moment! It goes so fast!’ I want to stand in the maternity ward and shriek it at strangers.

But I also finally understand what these words mean and it’s nothing to do with new mums and their babies at all. (Like so many of the words spoken between people) it’s about ourselves, yearning for the beautiful child we knew would grow up, but we didn’t really know until it happened.

And hell, it wasn’t even that fast — some of the days and weeks and months were an actual eternity — but it was finite.

And once it was over, none of those moments where it was just you and him stacking blocks or walking hand in hand to the shop or throwing the ball or playing crocodiles before bed are ever coming back. And even when you did your very best (and you didn’t every day) you wonder if you could have enjoyed him that bit more, loved him that bit harder, because sometimes you were bored or frazzled or worried or your face was jammed right up against the glass wall of your capacity as a person — you could see there might be a better way to be a parent but you couldn’t get there — and you still wanted a life for yourself and was that too much to ask?

And then they grow up and you burst with pride and relief and sadness and regret and it’s just how it goes.

So, new mums, I will do my very best not to tell you to ‘enjoy every moment!’ Or ‘make the most of it! It goes so fast!’ You’ll enjoy some moments and make the most of some days and they will be wonderful moments and days. But if it accidentally slips out, I’m sorry. Just shush me and ask me to make you a fresh cup of tea. Hot.

Jackie is a journalist turned communications professional with two giant teenage sons, based in Sydney’s inner west. Follow her on Twitter @jackiewoods

E
esther0 a year ago

Reply
Upvote
I have a 13 year old with special needs. Nothing is going fast. When you have a 13 year old who behaves as if he’s  a toddler I feel like shrieking out at the Maternity hospital to ‘put them back’. We all are having a very different experience.
A
alice kay a year ago